Accessibility links
Turbulent Trump Era May Unseat The Guardian Of The New Hampshire Primary For 40 years, New Hampshire Secretary of State Bill Gardner's office has been a mandatory stop for presidential hopefuls. But his brief association with President Trump may cost him his job. 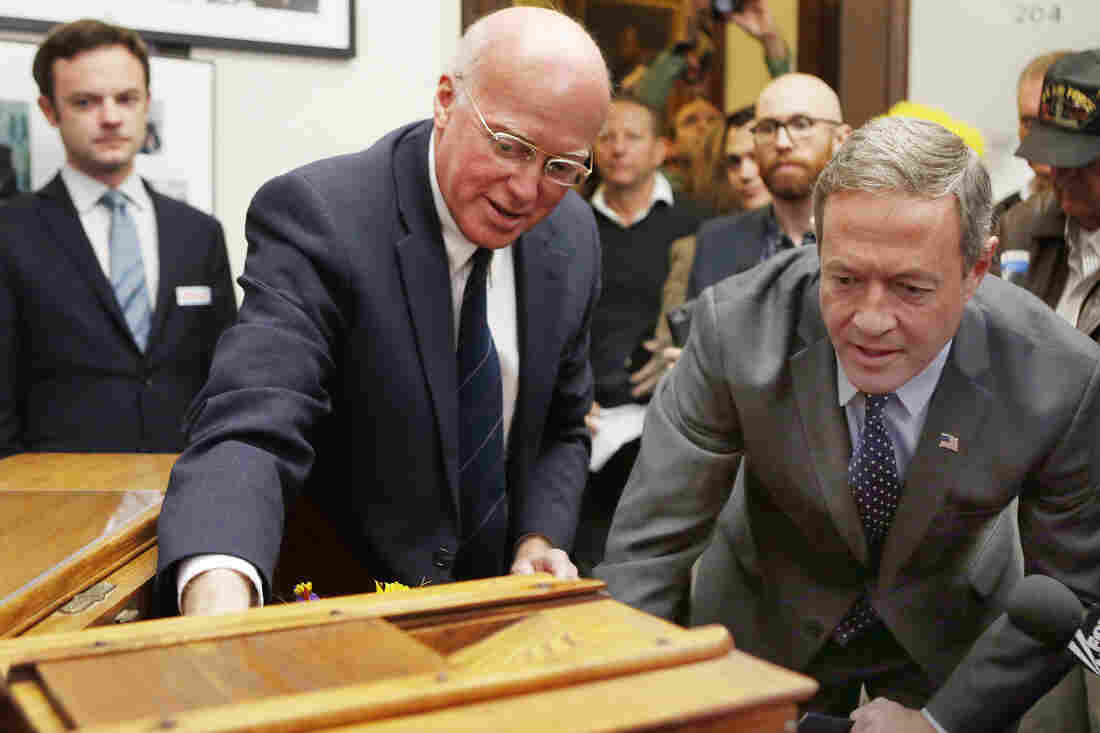 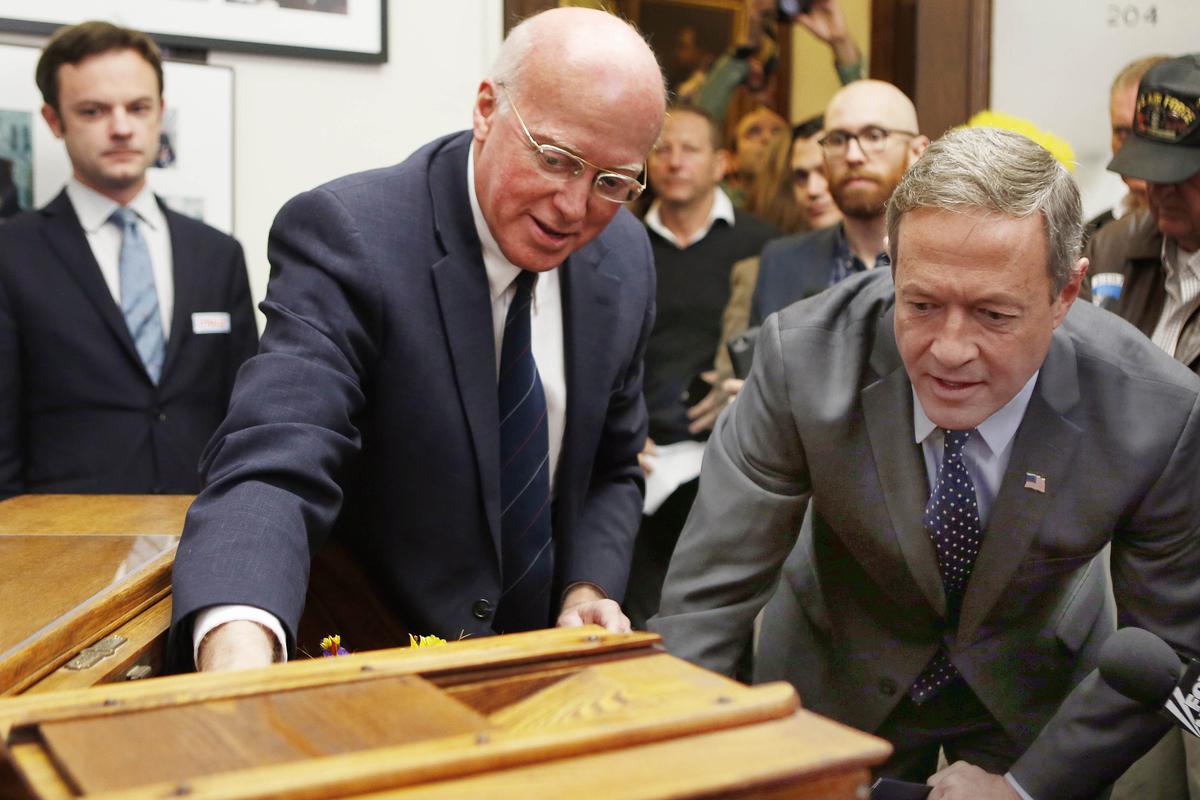 For the last four decades, the road to the White House has run through New Hampshire Secretary of State Bill Gardner's office.

It's a mandatory stop for presidential hopefuls from both parties, who parade through its lobby every four years to file their candidacy papers and formally place their name on the ballot for New Hampshire's first-in-the-nation presidential primary.

But Gardner, the nation's longest-serving secretary of state, is in danger of losing his post as New Hampshire's foremost political ambassador and a fierce protector of its place in the presidential nominating calendar.

After 42 years in office, he's facing his most serious challenge to date from a fellow Democrat who's tapped into simmering dissatisfaction over his stance on election reforms.

The members of New Hampshire's citizen legislature (400 state representatives and 24 state senators) will decide Gardner's fate on Wednesday. New Hampshire is one of three states where the secretary of state is chosen by state lawmakers — not by popular vote or a nomination from the governor.

This year's election pits Gardner, age 70, against a former gubernatorial candidate who's recently pivoted his focus to election reform, Colin Van Ostern. The race has come down largely to a debate over whether Gardner's reputation preserving the state's political traditions outweighs critiques about how well he's handling other responsibilities of his office.

"The best way we can preserve the primary for another hundred years is to bring the new needed energy and commitment to this office's other and equally important roles, like securing voter lists, increasing transparency, overseeing business services and protecting free and fair elections," Van Ostern said at his campaign launch.

Van Ostern, age 39, has a background as a political operative and has raised nearly a quarter of a million dollars toward his campaign to unseat the incumbent — leading to concerns that he would undermine the Secretary of State's role as an impartial monitor of state elections. 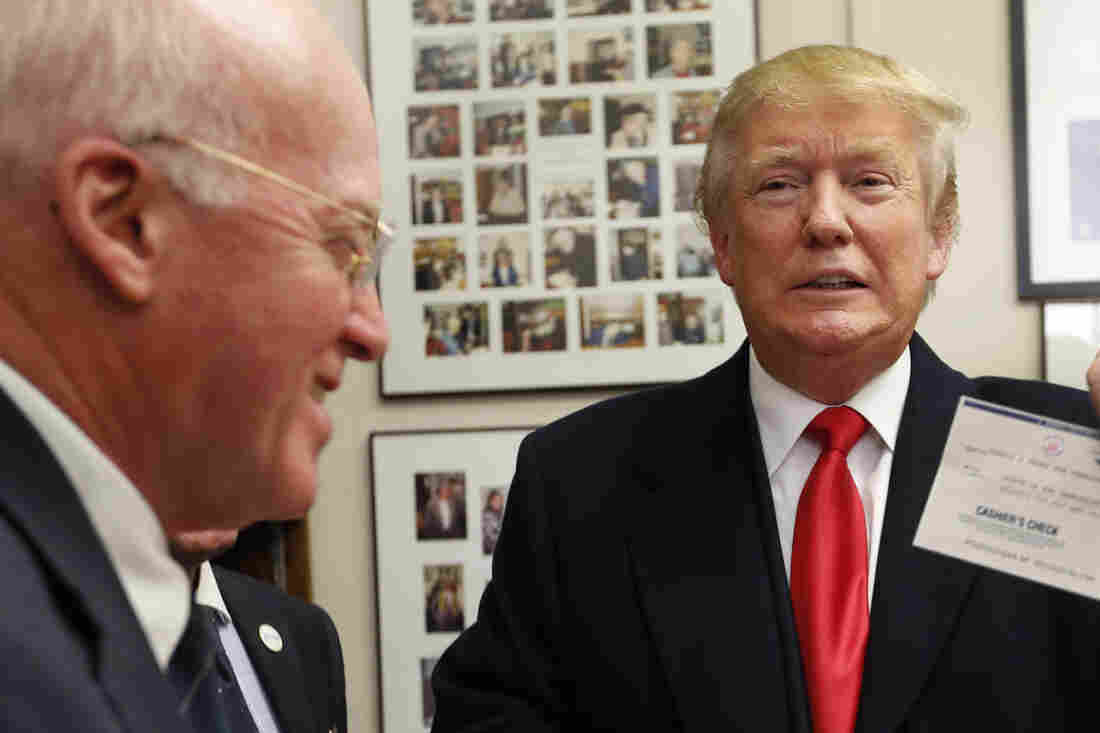 Gardner, left , watches as then-candidate Donald Trump shows off his filling fee check after filing papers to be on the primary ballot in Nov. 2015. Jim Cole/AP hide caption

But Gardner has also faced criticism about his impartiality in recent years.

This year's campaign to oust him comes after years of simmering frustration from local liberals over his support for Republican-backed election reforms, like voter ID requirements and stricter residency rules.

Gardner has said he wants more people to vote, but he's skeptical that efforts aimed at making it more convenient will achieve that goal.

"People will go out of their way if there's something that has value," Gardner said in 2015, explaining his philosophy on electoral reforms. "People will make the effort, if it has value. If it doesn't, they're not going to do it."

But arguably the biggest catalyst behind this year's push to oust Gardner was his participation in President Trump's "Presidential Advisory Commission on Election Integrity."

After accepting a seat on the Trump panel, Gardner — who has otherwise enjoyed bipartisan support and a legacy free from major public controversy — faced an unprecedented level of pushback from critics who saw the commission as an attempt to find justification for the president's unsubstantiated claims about widespread voter fraud.

"Secretary Gardner's association with this partisan commission risks tarnishing his long legacy of fighting for the New Hampshire Primary and promoting voter participation," Sens. Maggie Hassan and Jeanne Shaheen said last year, calling on him to step down from the panel. (Both Hassan and Shaheen have declined to endorse a candidate in this year's secretary of state election.)

Despite the public pressure, Gardner didn't just defend his role on the panel — he doubled down on his involvement, hosting its second meeting in New Hampshire.

"New Hampshire people aren't accustomed to walking away or stepping down from their civic duties," Gardner said in his opening remarks at that forum, "and I will not, either."

The commission ended up stagnating under the weight of mounting lawsuits and abruptly dissolved in early 2018, but questions about its motives have continued to follow Gardner in his quest for re-election. Steve Shurtleff, who's poised to be New Hampshire's next House Speaker, said it was a deciding factor in his choice to support Van Ostern.

"I've got tremendous regard for Bill Gardner and the work he's done, but I think it's time for the state of New Hampshire to maybe make a change," Shurtleff said recently.

But Gardner has been able to count on support from other allies with lots of clout among the state's political establishment in the final weeks of the campaign: political dignitaries organized a State House rally on his behalf, five former governors published an open letter urging lawmakers to give him another term, and top party activists penned columns praising his track record running the New Hampshire primary.

"He has served with the highest integrity," Republican National Committeeman Steve Duprey and Democratic National Committeeman Terry Shumaker wrote in the New Hampshire Union Leader. "His non-partisan approach has earned the utmost respect and trust from leaders on sides here as well as in other states."

But the decision is ultimately up to New Hampshire's Legislature, which has seen significant turnover this year — meaning that many of the people deciding Gardner's fate lack the same allegiances as those big-name politicians and party activists, and might prove more sympathetic to arguments that it's time for someone new.