Accessibility links
Key 1968 Harvard-Yale Battle Sets Scene For 'The Game' — And Football's Future Author George Howe Colt's choice to delve into the lives of the players and coaches in his new book, as well as the turbulent year itself, makes his writing about the actual game pay off beautifully. 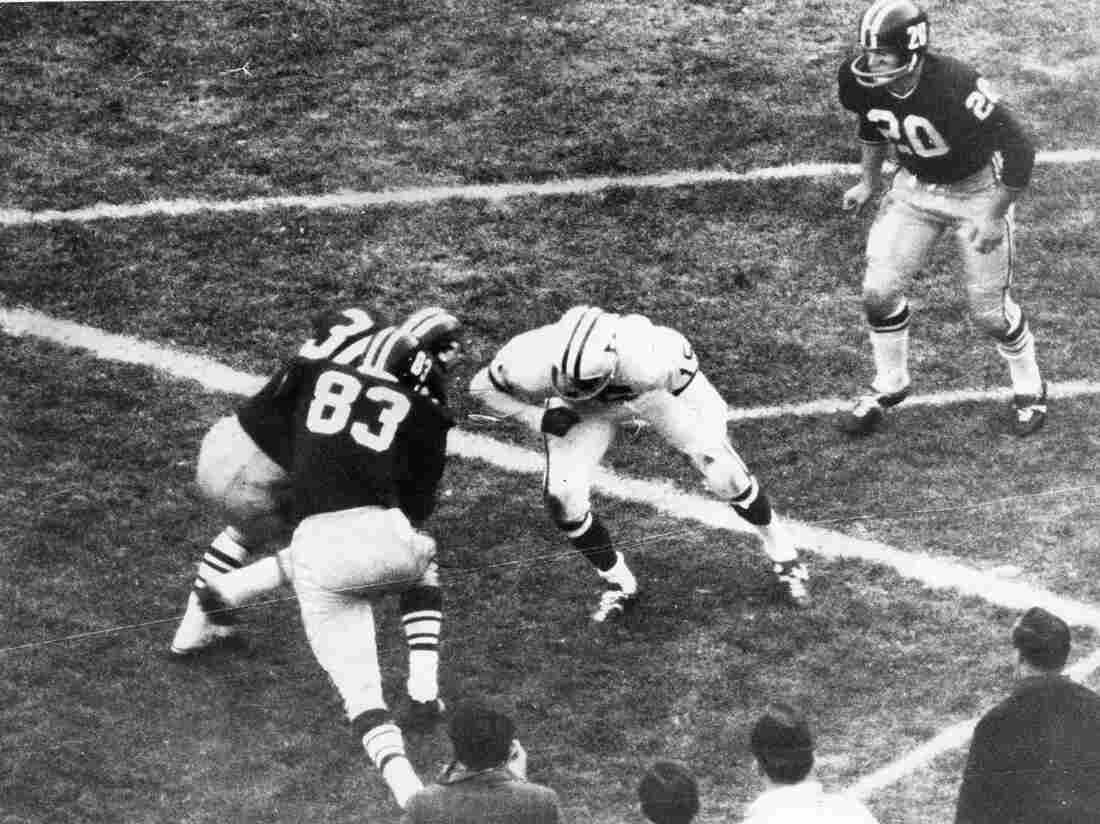 Harvard University's Bruce Freeman tries to run around a teammate and a Yale player and into the end zone after catching a pass during the final 42 seconds of The Game against Yale University at Harvard Stadium in Boston on Nov. 23, 1968. Boston Globe via Getty Images hide caption 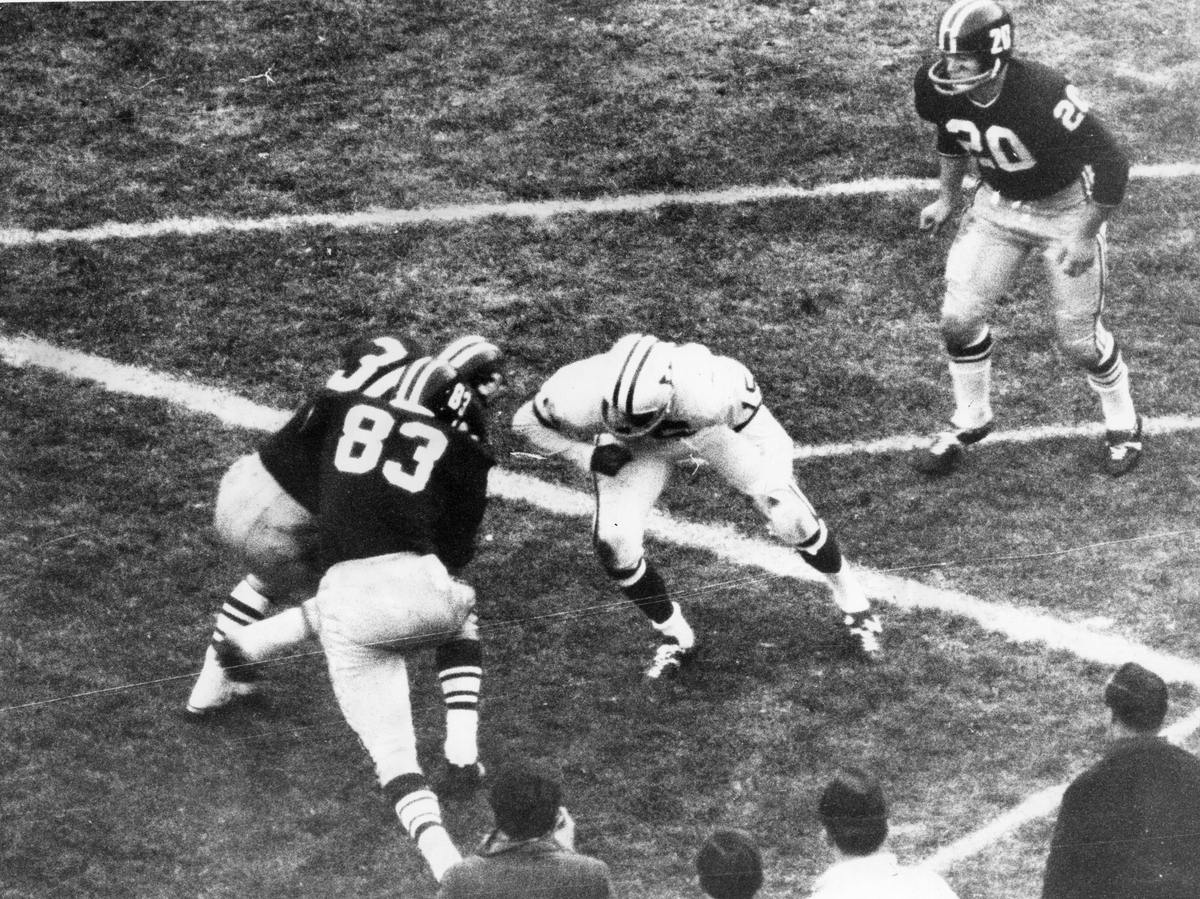 Harvard University's Bruce Freeman tries to run around a teammate and a Yale player and into the end zone after catching a pass during the final 42 seconds of The Game against Yale University at Harvard Stadium in Boston on Nov. 23, 1968.

When college football championship time rolls around each year, you're not likely to encounter the names Harvard or Yale.

The legendary schools play in the Football Championship Subdivision, which in recent years has been dominated by teams like North Dakota State and James Madison. When an Ivy League school does manage to crack the Top 25, it's usually Princeton or Dartmouth. 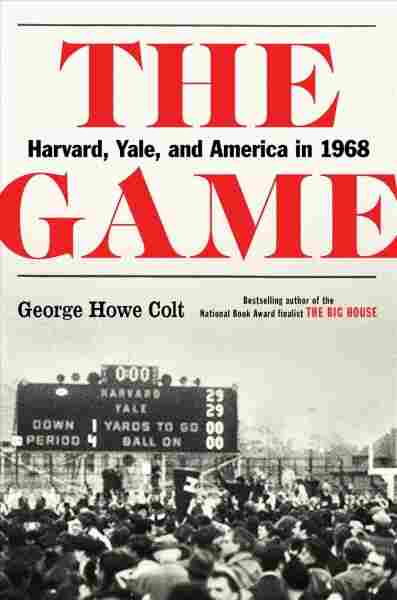 But college football as we know it likely wouldn't exist without the two bitter rivals, who, as George Howe Colt writes in his fascinating new book, The Game," came up with most of the rules and innovations that would transform the game from a semi-organized brawl into a sophisticated sport." Colt's book is a transfixing look at a season in the Ivy League that would culminate in one of the most unforgettable matches in college football history. (If you're 50 years behind on sports news, fair warning: The outcome of the game will be revealed later in this review.)

Colt is quick to disclose his special interest in the Harvard-Yale rivalry: The Massachusetts writer bleeds crimson, and has long considered the yearly game to be "a clash of civilizations that seemed no less than that of Athens and Sparta." But he dedicates just as much ink to both schools in his book, taking deep dives into the coaches and players who made the 1968 season so unforgettable.

Those characters include Yale quarterback Brian Dowling, whom the student newspaper simply called "God" — and who was the inspiration for the perpetually helmeted character B.D. in Garry Trudeau's Doonesbury comic strip. They also include a terse Harvard offensive lineman from Texas — at the time an aspiring actor — named Tommy Lee Jones. Colt even briefly mentions some of the team's fans then: an enthusiastic Eli named George W. Bush, and a Harvard man (and roommate of Jones) named Al Gore. (Some rivalries, it seems, never die.)

Colt's book is based heavily on interviews with the players involved in the legendary game, and he paints rich portraits of many of them. He has a clear sympathy for the underdogs — players like Harvard safety Pat Conway, a 24-year-old Vietnam vet who struggled with dyslexia, and Yale player Calvin Hill, a shy young man who aspired to be his university's first African American quarterback. (At the time, many coaches were loath to start black quarterbacks; Hill, despite his talent, was assigned fullback.)

Football doesn't happen in a vacuum, of course, and 1968 was one of the most fraught years in modern American history. Colt carefully looks at the social upheaval in America through the lens of the players, providing fascinating context to that year's football season. Harvard, for example, had two players in the school's ROTC chapter, and two who were regulars at meetings of the left-wing Students for a Democratic Society (SDS). The students at Yale, by contrast, hadn't been quite as caught up in countercultural fervor, although its team did feature liberal players like Bob Levin, who would post anti-war posters on campus with his then girlfriend, a Vassar drama major named Meryl Streep.

Colt's decision to delve into the lives of the players and coaches, as well as the turbulent year itself, makes his writing about the actual Harvard-Yale game pay off beautifully. That year's match was "the most ballyhooed ever," with both teams entering the last game of the season undefeated. Colt dedicates 52 pages to the game itself — and he writes so evocatively and so intensely, it's hard to put the book down for even a second. It's an absolutely remarkable piece of sportswriting.

The game ended with one of the most iconic comebacks in college football history. Harvard, the underdogs, were down by 16 points with just a few minutes left in the fourth quarter; thanks to some favorable calls by the referees and a miraculous onside kick, the Crimson managed to tie the game with no time left on the clock. The outcome (remember, this was in the days before overtime) led the elated Harvard student newspaper to publish its now famous headline: "HARVARD BEATS YALE, 29-29."

Read an excerpt of The Game

There's no doubt that football fans will find The Game fascinating — Colt understands the nuances of the sport, and he writes about it with an enthusiasm that never descends into rah-rah fandom. But you don't have to be a sports fan to enjoy the book; like Buzz Bissinger's Friday Night Lights, its human focus makes it accessible to everyone, even if you don't know the difference between a touchback and a touchdown. Vibrant, energetic and beautifully structured, The Game is a big-time winner.