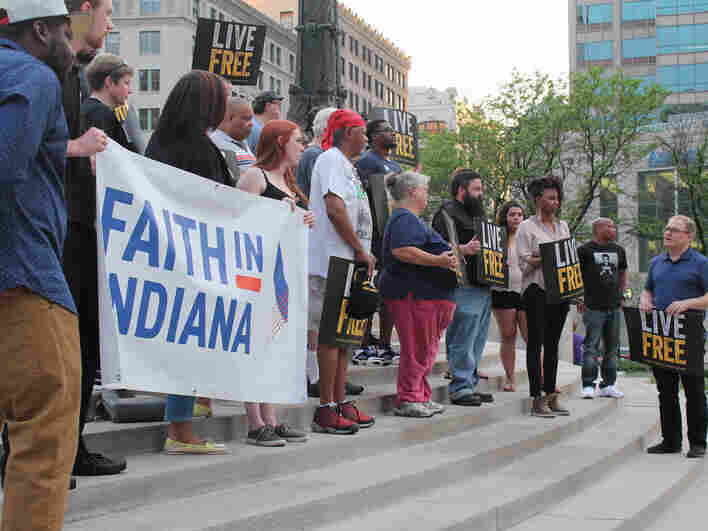 A crowd of faith-based progressive activists rally in Indianapolis. The religious left in Indiana are working to make inroads in the state legislature, long-dominated by conservative Republicans. Lauren Chapman/Indiana Public Media hide caption 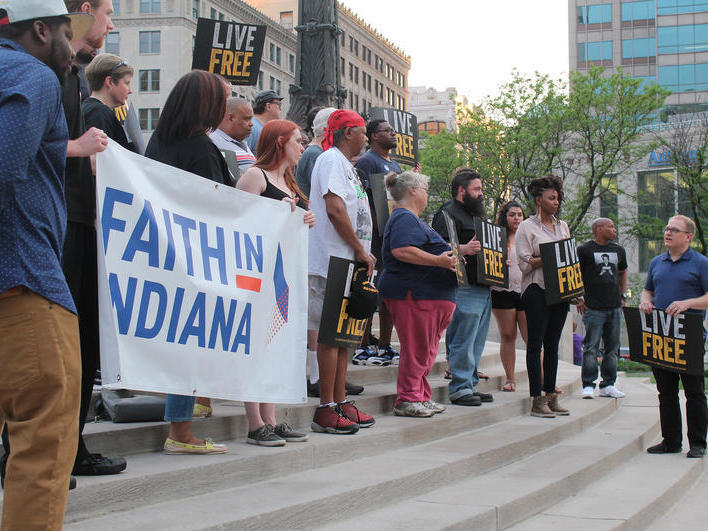 A crowd of faith-based progressive activists rally in Indianapolis. The religious left in Indiana are working to make inroads in the state legislature, long-dominated by conservative Republicans.

Vice President Mike Pence often describes his conservative religious views as "Hoosier values." It's a consistent narrative in a state that, with the exception of 2008, has voted for Republican presidents since 1980.

The religious right in Indiana has long been a powerful political force. But now a progressive interfaith movement, called Faith In Indiana, is trying to challenge that foothold.

The group, consisting of­ a broad political spectrum of Muslims, Jews and Christians, has organized in minority communities on issues like immigration, universal health care, criminal justice reform, and early childhood education.

They're offering a new call to action for religious voters, says Nicole Barnes, Faith in Indiana's voter engagement director. "The ground game is very important," she says. "Specifically if, you want to really reach out to those on the margins."

"We wanted to be sure that, as trusted moral messengers, that we were able to lift up a counter-narrative to what was said, and lifting up the good of people," Barnes says.

We're here to say that there are other people of faith, with other ideas about how to build a beloved community, that are working every day to impact this country and change our country.

Rev. Alvin Herring is the executive director of the national group, Faith In Action. He credits his group with a recent success in Florida with the passage of a ballot initiative to restore voting rights to people with felony convictions.

"One could certainly assert that more conservative voices have been given more sway," Herring says. "But we're here to say that there are other people of faith, with other ideas about how to build a beloved community, that are working every day to impact this country and change our country."

Indiana's branch of Faith In Action launched statewide this year. It targeted five races in the general election, with the ambitious goal of ending the Republican supermajority in the statehouse.

To do so, the group worked in races where minority voters made up 40 percent of the margin of victories in 2014. They canvassed door-to-door and supported community phone banks and peer-to-peer text campaigns. And they ran "get out the vote" campaigns in communities of color.

They came close. Three of those five races flipped. And Indiana's House is now only one seat shy of ending a six-year supermajority.

Hiba Alami leads the Indiana Muslim Advocacy Network and partnered with Faith In Indiana on a Muslim-to-Muslim get out the vote campaign.

One of the issues they've advocated for is a statewide hate crime law. Indiana is one of five states lacking a hate crime law and conservative religious groups have lobbied against any new legislation.

"As an organization we decided we would not accept [anything] but fully inclusive hate crime legislation," Alami says. "This stems from our faith values. Again, social justice."

Those faith values sometimes pull these faith communities in different directions. But Faith In Indiana's president Shannon McVean-Brown, an Episcopal priest, says the group doesn't focus on that.

"The vice president is a Roman Catholic priest. There are plenty of things we could disagree on," McVean-Brown says. "But I've never spent any time arguing over those things."

In fact, that Roman Catholic priest, Father Paul Ybarra, says he's usually the conservative voice in the progressive-leaning group. He says he's involved because the issues they advocate for affect his South Bend, Ind., parishes.

"Yeah, it seems progressive," Ybarra says. "I just think it's Gospel value, in order to serve those most in need."

To serve those communities, McVean-Brown says faith leaders must engage in politics.

"For some people, they think, 'oh we're not supposed to be getting involved in politics,'" McVean-Brown says. "And, I can speak as a Christian, I know that Jesus was — a lot of the things he did had to do with politics."

The group's goals for 2020 are pretty lofty. It wants to not only break Indiana's supermajority, but elect a progressive majority.

"And the more we engage them, and the more active they are and the wins that we have or that we encourage or are a part of, mobilizes more voters and helps people see, 'oh... Hoosiers aren't just all white. They're not just all Republicans.' And you know, and that's the beauty of this state," McVean-Brown says.

Those goals will be no easy feat in a state where Democrats haven't controlled the Senate for more than 40 years.

This story comes to us from Indiana Public Broadcasting.