Accessibility links
Director Barry Jenkins Talks On Behalf Of 'Beale Street' The director of Moonlight has made a new film: If Beale Street Could Talk, based on the James Baldwin novel. He's using it to represent black complexity, vulnerability and skin colors. 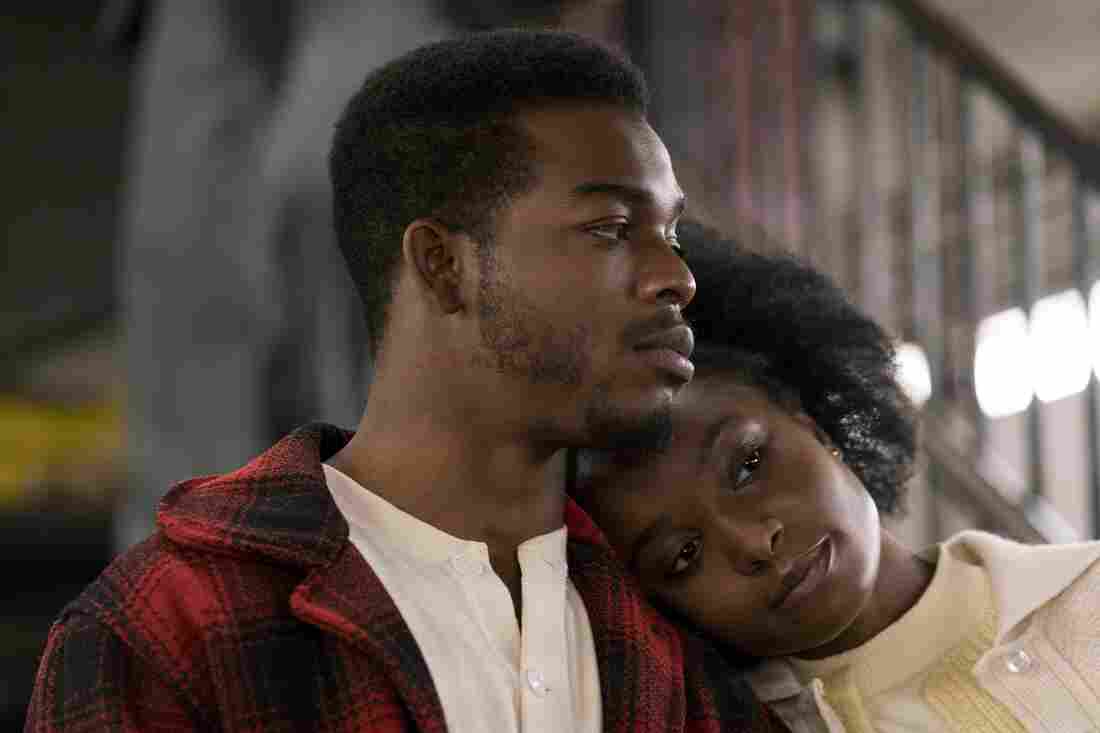 Stephan James and KiKi Layne star as Fonny and Tish, the couple at the center of If Beale Street Could Talk. The movie is director Barry Jenkins' adaptation of a James Baldwin novel of the same name. Tatum Mangus/Annapurna Pictures hide caption 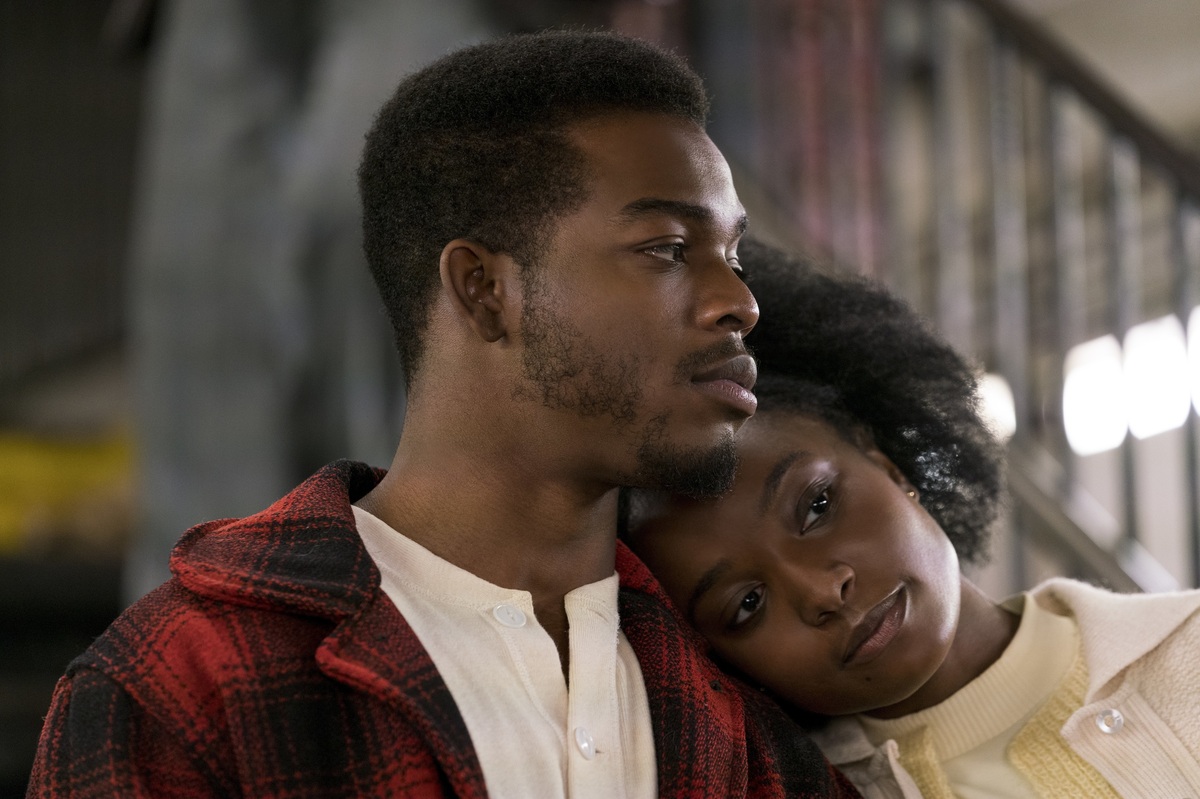 Stephan James and KiKi Layne star as Fonny and Tish, the couple at the center of If Beale Street Could Talk. The movie is director Barry Jenkins' adaptation of a James Baldwin novel of the same name.

The new movie If Beale Street Could Talk is based on a James Baldwin novel of the same title.

Barry Jenkins (Moonlight) adapted and directed the film. And in working with the Baldwin estate, he received a leather notebook filled with Baldwin's handwritten notes about how he would have approached a film version.

"When I opened it, it was like this slow epiphany — this dawning where I understood what I was holding," Jenkins says in an interview. "And it was electric. ... It wasn't this thing where they were sending me this thing to go: 'Just so you know, this is how Jimmy wanted it done.' If anything, it was a confirmation that we were moving in the same spirit."

In Beale Street, Fonny and Tish are lovers. Tish finds out she's pregnant, but they can't start a life together because Fonny ends up in prison — he's been falsely accused of a rape.

The movie is about the ways in which the criminal justice system works against black men. It's also about Tish and her growth, and her fight to get Fonny out of jail.

On why a character like Tish, a woman both soft and tough, may seem unusual 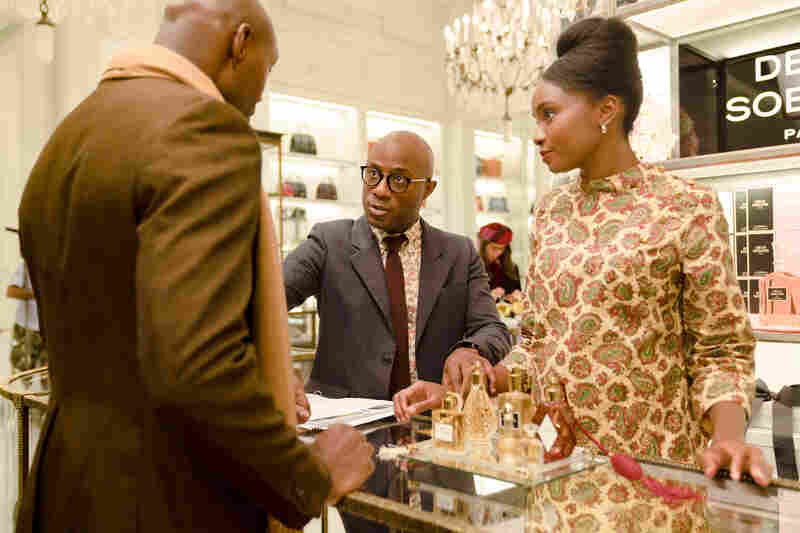 Barry Jenkins (center) directs actor KiKi Layne and another on the set of If Beale Street Could Talk. Tatum Mangus/Annapurna Pictures hide caption

I think part of why the character may seem unusual — you know, I can't say this is the first character who's exhibited those qualities. That might be the first character who looks like KiKi Layne, and who walks on screen with her natural hair. But I think what I see in that is — authors like James Baldwin have been writing these characters for decades, you know, but authors like James Baldwin haven't been adapted into feature films as often as their peers. The characters exist, you know, and it's incumbent upon people like me to bring them to the screen.

On the vulnerability of Fonny's friend Daniel, who has just been released from prison

We have these walls, or — I mean, I guess, everyone, not only men, not only black men, I think everyone — we present these representations of ourselves, these avatars, you know, of who we are. We try to show the world, whether it's on our Twitter profile or Instagram, that we're all good. But I think that these traumas that befall quite a few of us — we carry them with us. And so sometimes, if you meet a person, you can't tell them right away that you're still feeling this deep trauma. But if you spent enough time with them, it goes from, you know, "I'm good" to "I'm good, and--" to "I'm good, but--" to, finally, "I'm not good."

And I think that Mr. Baldwin was doing with that character was showing: This is what could possibly happen to a young man like Fonny. Here it is in flesh and blood, exhibited through this character [Daniel] played by Brian Tyree Henry. ... He enters the scene, and he's so jovial and full of life. But as he reveals these layers of himself, you come to understand that this experience he's been through — it's still with him very much. And it's going to weigh him down for the rest of his life.

On depicting the character of Victoria, who identifies Fonny as her rapist

Fonny's not falsely accused of anything — he's chosen out of a police lineup. He's placed in a police lineup by an officer who very clearly has a very racist bent. And so for me, when you unpack it that way, it was clear that Victoria Rogers was not the antagonist. I think all these things are set up, all these characters are set up in a way that you do empathize with all of them. And so for me, it wasn't a challenge at all to understand that she had as much right to speak as Regina [King, who plays Tish's mother], and she had as much right to her humanity as Fonny.

On having actors frequently turn directly toward the camera

I think that what we're dealing with in this film is so heavy — you know, it requires such a dense unpacking ... when you walk into a cinema, the actors are never looking directly at you — you're always allowed to remain outside it. And for me, there's a level of empathy that that engenders. But there's a deeper level of empathy that you can access if you're looking someone directly in the eye. We have these moments where we have the characters look directly at the camera. They're often not planned.

And I'm glad you mentioned the one with Emily Rios (who plays Victoria Rogers) because that one was not planned. And I just felt like Emily had gone to this place where all these things that were in my head — that this woman is not the antagonist, that she is a victim, and she does deserve empathy. And I felt like we were going to need a moment early in the film where the audience looks her directly in the eye and understands: You are not going to be angry at this person.

On lighting and filming dark-skinned actors

You know, those choices belong to my cinematographer, James Laxton. So I've got to give him all the props there. You know what I'll say with James is — you know, we've been working together since we were in film school. And so we've always had very honest conversations. And we were in school, and we were shooting on film, and we were learning the history of how film emulsion was constructed. Now you know ... emulsion, initially, was not designed for feature films. It was designed for suburban families to take home, you know, and record images of their kids. And those kids — the people who had the spending power were primarily white. And so emulsion film (like 35 mm Kodak film) was originally engineered to accurately represent white skin. And so when you would go and buy, you know, film in the '40s, the '50s, the '60s, you know, for black folks it was very difficult for us to turn out ... I think that if you were adjusted or balanced (white balanced), you know, for white skin, then, you know, black skin is going to be underexposed. You know, this richness, this luster, you know, is not going to accurately reproduce.

I think now, with these digital tools, all those things have been thrown to the wayside. And so again, we can build a production approach that is specifically designed to recalibrate the history of cinema, so that it's now designed to prioritize this dark skin. And I think James has done a great job over the last, I guess, 17 years we've been working together of perfecting the ways in which the medium can accurately reflect, you know, this very dark, black skin. ... My dear, there is a scene in this film where there are eight black people sitting in the living room of so many different hues, and they all look so wonderful. Such a shout out to James. I'm very, very proud of him.

Sam Gringlas produced this interview for broadcast. Patrick Jarenwattananon adapted it for the Web.