Accessibility links
North Carolina GOP Leader Open To New Election Amid Fraud Investigation The head of North Carolina's Republican Party says he would "not oppose" a new election in the state's 9th Congressional District if allegations of fraud by a GOP operative prove true. 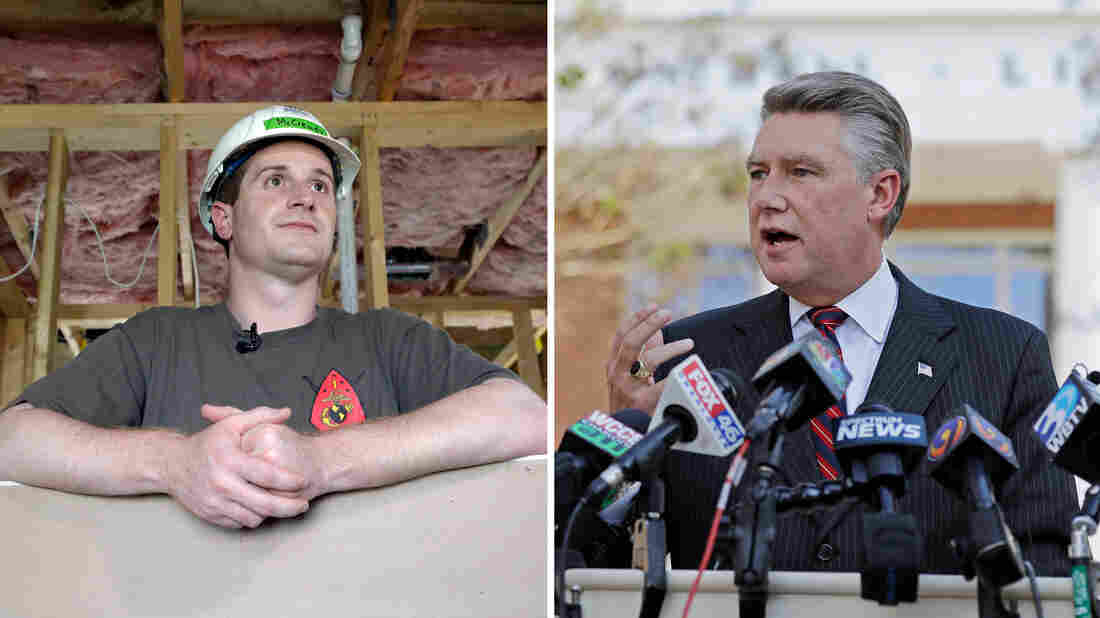 Democrat Dan McCready (left) and Republican Mark Harris are the candidates at the center of a contested race to represent North Carolina's 9th Congressional District. The state is investigating claims that a GOP operative may have manipulated ballots. Chuck Burton/AP hide caption 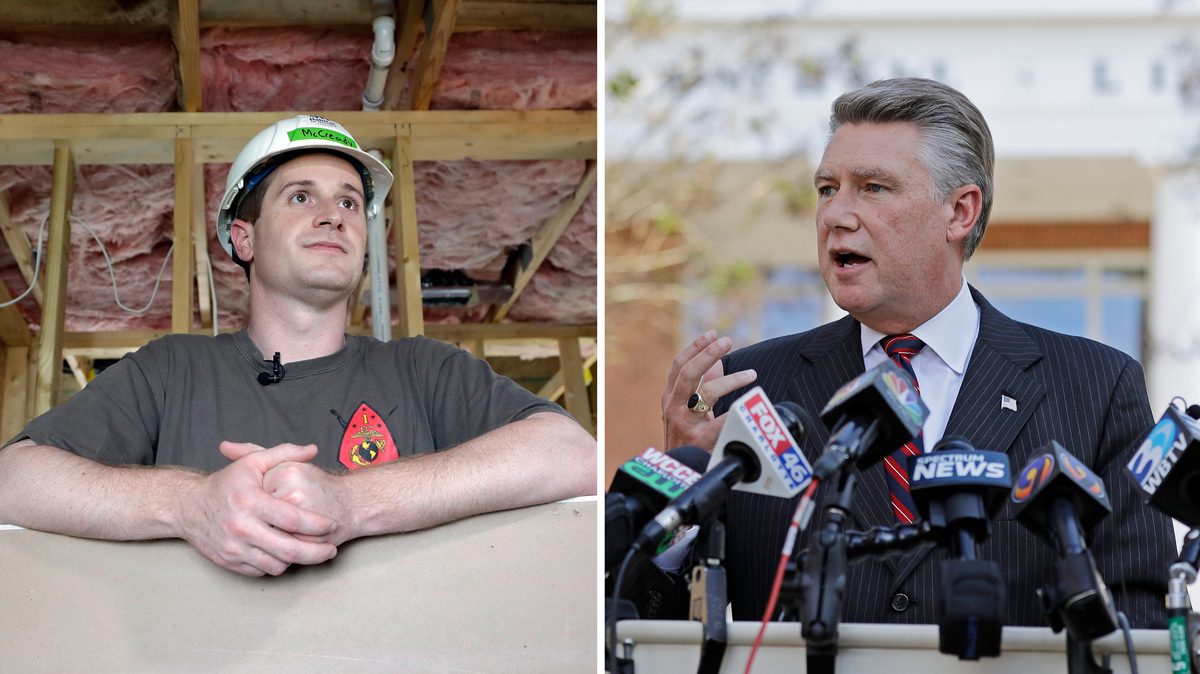 Democrat Dan McCready (left) and Republican Mark Harris are the candidates at the center of a contested race to represent North Carolina's 9th Congressional District. The state is investigating claims that a GOP operative may have manipulated ballots.

The head of North Carolina's Republican Party says he would "not oppose" a new election in the state's 9th Congressional District if allegations of fraud by a GOP operative prove true.

"If they can say with a strong degree of certainty that the outcome of the race was changed or there is a substantial likelihood that it could have been, the law requires that there be a new election, and we would not oppose," said Dallas Woodhouse, the executive director of the North Carolina Republican Party, in an interview with NPR.

Woodhouse's comments are in tune with a growing chorus of officials on both sides of the aisle who suggest the only remedy to addressing the ballot issues in the race between Republican Mark Harris and Democrat Dan McCready may be a fresh election. Under state law, a new election can be called if irregularities cast doubt on the outcome of a race.

The unofficial tally of results had Harris winning the race in southeastern North Carolina by a little over 900 votes. But election officials have not certified the race due to concerns about irregularities and possible fraud involving mail-in ballots.

An operative working on behalf of Harris' campaign is the focus of an investigation by state election officials and law enforcement.

In Washington, the likely incoming speaker of the House, Democrat Nancy Pelosi of California, hinted at the possibility that Harris' eligibility to serve in Congress would be questioned. "The House still retains the right to decide who is seated," she said.

"This is funny business on the part of Democrats, in part to try and steal this race," Woodhouse told NPR on Monday.

But a lot has changed since then, especially as more information has come to light about the operative, McCrae Dowless. He was active in Bladen County in the eastern part of the district.

Leading up to the 2018 midterms, Dowless was reportedly paid by a consulting firm hired by Harris to help get out the vote.

"No comment, no disrespect to you," Dowless said, before hanging up.

The State Board of Elections is investigating whether Dowless had a role in manipulating or even handling absentee ballots.

The board released documents on Wednesday that shed light on the extent of Dowless' efforts.

Of the 1,300 or so absentee ballot requests Bladen County received, Dowless turned in almost half of those on behalf of voters.

Harris, the Republican candidate, won 61 percent of the mail-in ballots that were turned in. But of the voters who turned in the absentee ballots, only 19 percent were registered Republicans.

Several witnesses say Dowless paid them to collect ballots from voters, which is illegal under North Carolina law.

On Thursday, McCready withdrew his concession to Harris, and hinted at the possibility that Harris could be directly involved in the controversy.

I didn’t serve overseas in the Marines to come home to NC and watch a criminal, bankrolled by my opponent, take away people’s very right to vote. Today I withdraw my concession and call on Mark Harris to end his silence and tell us exactly what he knew, and when. pic.twitter.com/2hcT00DVhQ

"But last week we began to learn about shameful criminal activity bankrolled by my opponent to take away North Carolinians' right to vote," McCready said. "I didn't serve overseas in the Marine Corps just come back home and watch politicians and career criminals attack our democracy. That's why today, I withdraw my concession to Mark Harris, who's remained completely silent. And I call on Mark Harris to tell us exactly what he knew and when he knew it."

The Washington Post reported Thursday that Republican Party officials in North Carolina and Washington, including Woodhouse, were made aware of potential voting irregularities involving Bladen County's mail-in ballots after the May primary election. Harris defeated incumbent Rep. Robert Pittenger in that primary and won a majority of the mail-in vote in Bladen County.

Speaking prior to the publication of the Post's report, Woodhouse was adamant that the one person who was unaware of what Dowless was up to was candidate Mark Harris.

"What we know is the people down in Bladen County are scoundrels. But there's no way Mr. Harris knew," said Woodhouse. "He is a man of honor, and integrity, and we stand by him personally."

The North Carolina Board of Elections is slated to hold an open hearing on or before Dec. 21 to discuss the findings of its investigation.