Accessibility links
A Century Later, An Illuminated Eulogy For A Jazz Pioneer Pianist Jason Moran calls James Reese Europe "basically the 'big bang' of jazz." Moran's tribute to the composer and WWI "Hellfighter" pulls his contributions to the genre out of history.

A Century Later, An Illuminated Eulogy For A Jazz Pioneer

A Century Later, An Illuminated Eulogy For A Jazz Pioneer 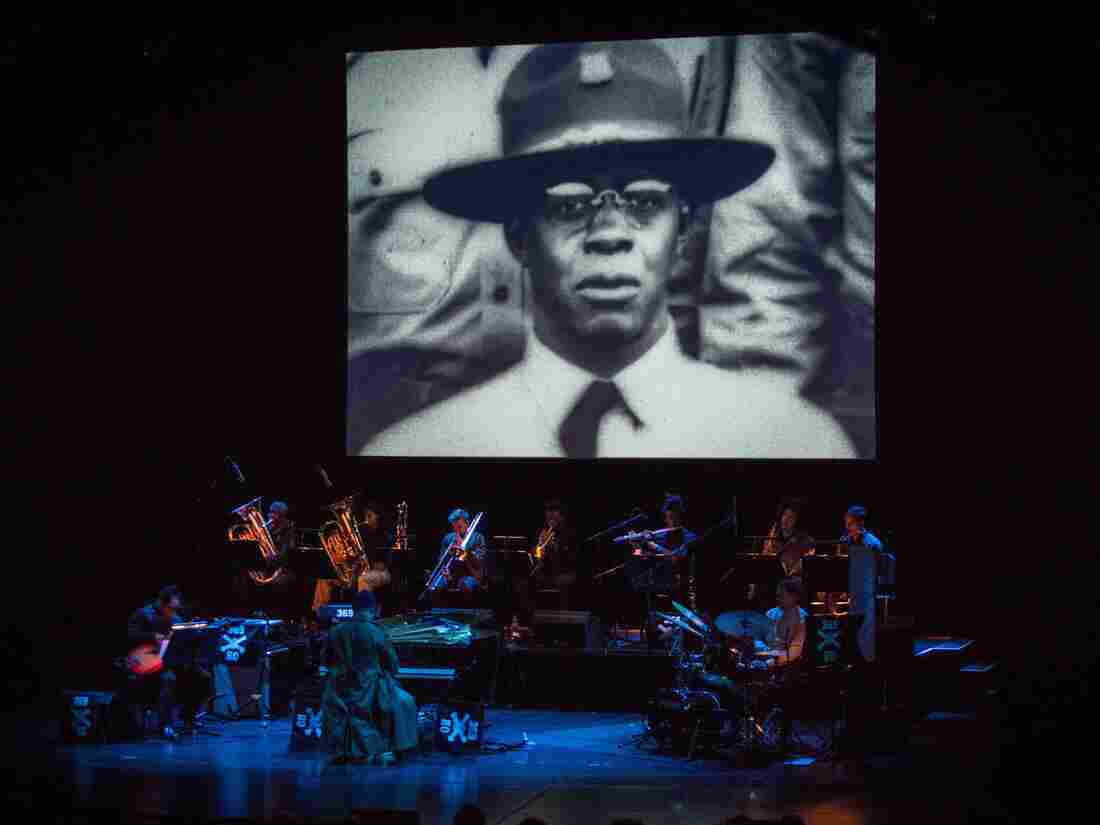 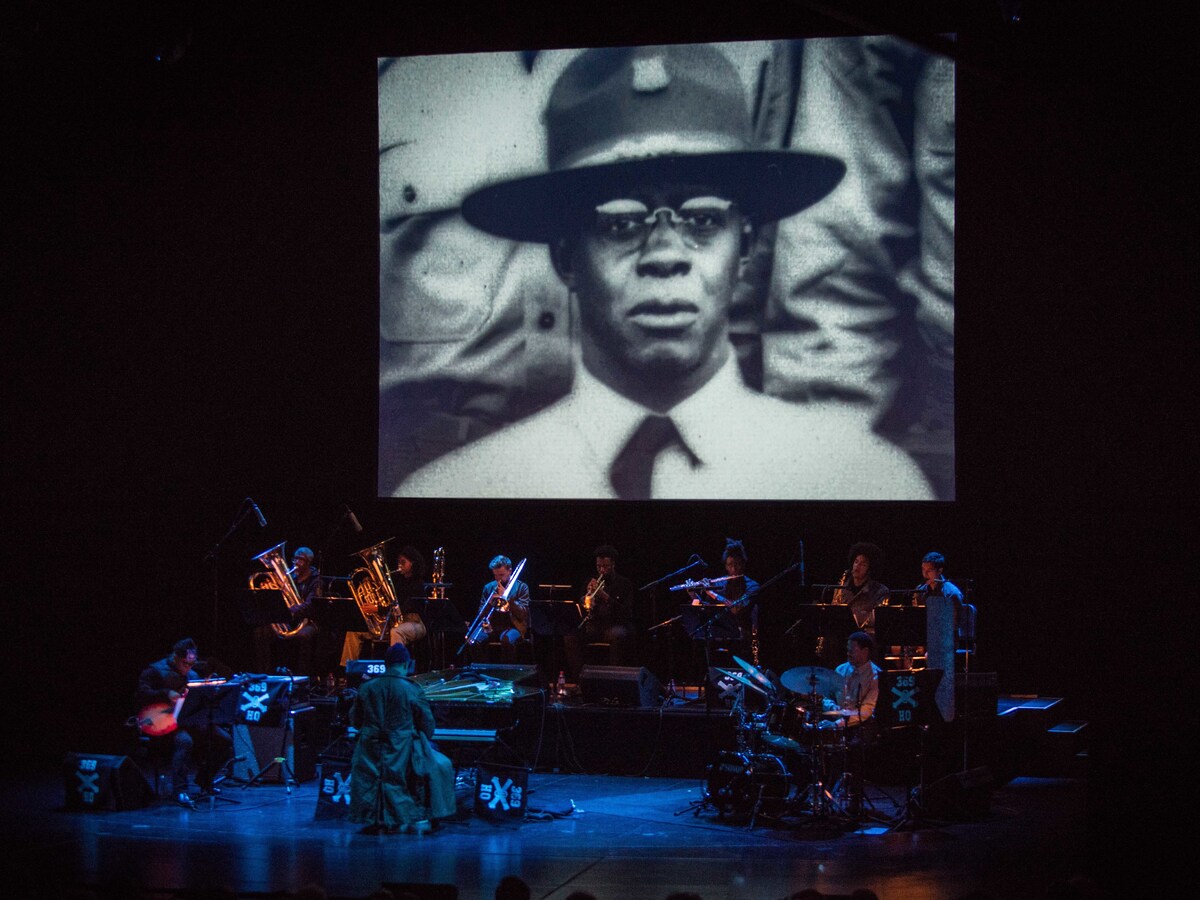 For his multimedia tribute to jazz pioneer and war hero James Reese Europe, Jason Moran doesn't wear his usual performance attire. His wife, the musician Alicia Hall Moran, had some ideas for a more meaningful costume.

"She told me I needed to experience the same weight and pressure Europe and his soldier musicians did when they performed in uniform overseas," says Moran.

So as a kind of method acting tool, Moran sits down at the piano in a heavy army green trench coat and tightly laced boots. "Those boots are constricting," Moran says. "It's a small gesture, but it helps me remember what black bodies had to take for freedom."

Costuming is just one of the many ways that Moran seeks to inhabit the life and music of Europe, New York's most prominent black musician in the 1910s. Eubie Blake called Europe the "Martin Luther King of music" for his innovation as a composer and innovator, as well as his charisma and skill as an organizer. In 1912, for example, Europe gathered 125 musicians on Carnegie Hall's stage for what's been called the first concert where jazz was ever heard at the venue. He then risked it all, and changed the course of jazz history, by enlisting in WWI, organizing the first black infantry regiment, the 369th, a group of soldiers and musicians which both fought on the front lines and introduced jazz to France, earning the nickname the Harlem Hellfighters.

"James Reese Europe was basically the 'big bang' of jazz," says Moran. "And somehow he's usually not more than a footnote in the history books. The people Europe influenced — like Noble Sissle, Eubie Blake and Duke Ellington — have gotten way, way more attention."

That under recognition, along with the scope of Europe's ambition, inspired Moran to make him the final subject in a trilogy of audiovisual performances on key figures in Harlem's jazz history: Thelonious Monk (IN MY MIND, 2007), Fats Waller (Fats Waller Dance Party, 2011) and now Europe in Harlem Hellfighters: James Reese Europe and The Absence Of Ruin. Moran performed his Europe project this fall in the U.K. and Germany, and will give its U.S. premiere on Saturday, Dec. 8 at the Kennedy Center, where Moran serves as Artistic Director.

When an invitation to JazzFest Berlin gave me a chance to catch Moran's performance there, I spent a few weeks looking into Europe's history. Moran has spent years. Early in Moran's career, his piano mentors Jaki Byard and Randy Weston emphasized Europe's importance, and Weston himself worked tirelessly to raise Europe's profile in concerts and panel discussions. "Europe was always there for me," Moran says. "But there was always a sense that I needed to know more about him."

Moran was already organizing a project around Europe when he was awarded a 2017 residency at the American Academy in Rome. That summer Moran visited the extensive ruins nearby at Ostia Antica; at the same time he learned about Caribbean writer Orlando Patterson's idea of the "absence of ruin," which addresses how African Americans lack the visible heritage Moran was then seeing in Italy. For Moran, Patterson's thoughts around black memory connected to Europe's overlooked legacy. So in lieu of monuments to Europe, Moran endeavored to make Europe's music itself a structure or site of remembrance, however fleeting. "I have to pull off this performance in a way that honors him," says Moran. "It was the same challenge in the tributes to Monk and Fats Waller. I have make something that their spirits will say, okay, 'I'm going to let him keep doing that.'"

Moran calls the Europe project a "meditation." Rather than presenting an authoritative or faithful musical homage, he uses multimedia to forge a deep but oblique connection with Europe and his legacy. "The questions that run around in my mind as I'm working on these tributes are why an artist does what they do, and what did they seek to accomplish," he says. 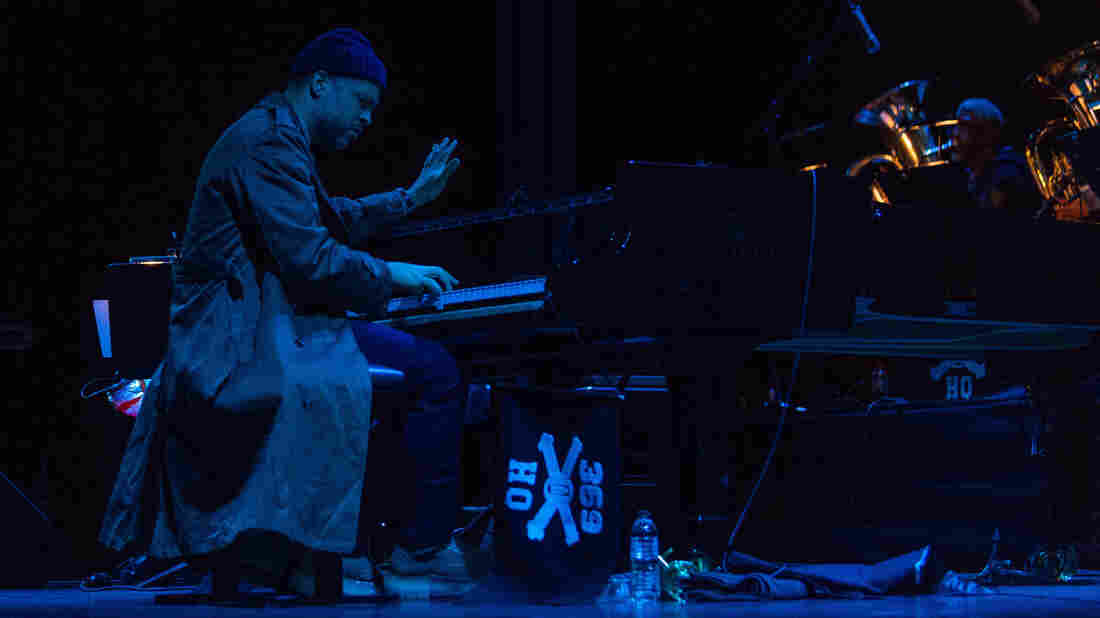 "I have to pull off this performance in a way that honors him," Jason Moran says of his tribute to James Reese Europe. Camille Blake/courtesy of JazzFest Berlin hide caption 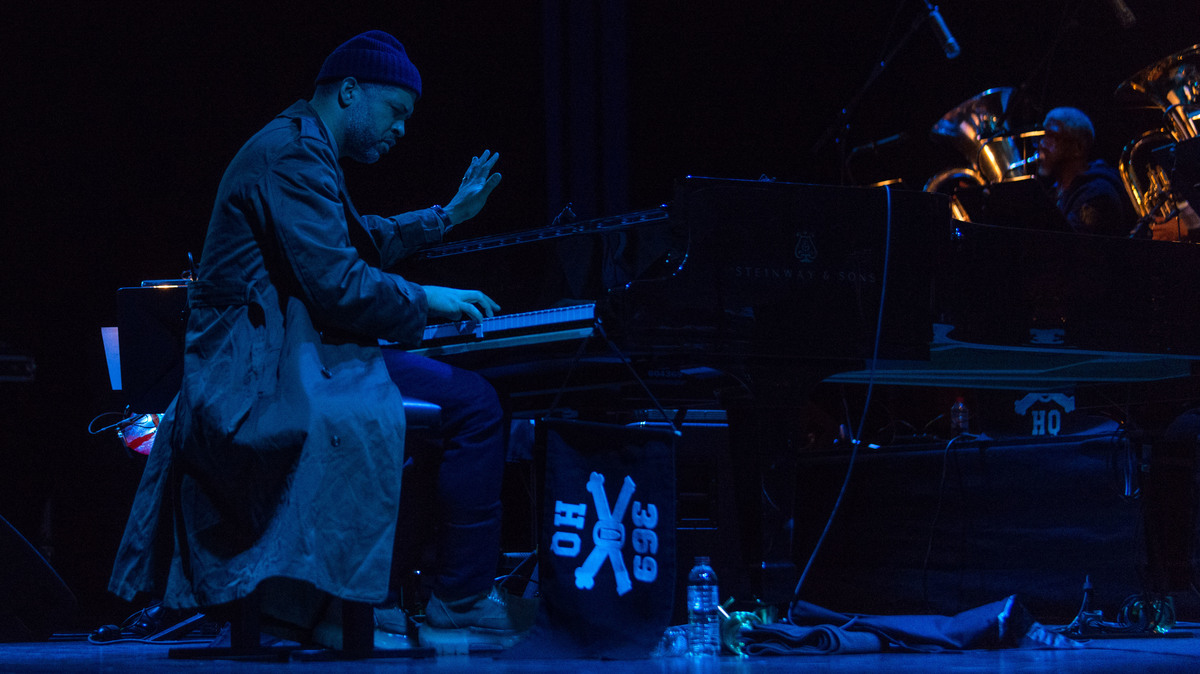 "I have to pull off this performance in a way that honors him," Jason Moran says of his tribute to James Reese Europe.

Moran has made interdisciplinary performance so central to his work that an art gallery, Luhring Augustine, represents him. In his treatments of Monk, Waller and now Europe, Moran creates conceptual art interventions into the artists' lives and music. The aim is for both Moran and the audience to connect with these historical figures beyond the surface of their music, with everyone building their own distinct narrative from the multimedia performance. "All these different elements start to combine and tie into a story, but I get to decide how to get from A to B to C to D, and so does the audience," Moran says.

Moran's staging for The Absence of Ruin includes his longstanding Bandwagon trio with Taurus Mateen and Nasheet Waits, along with tuba player Andy Grappy, and six horn players from the U.K. educational and professional development organization Tomorrow's Warriors, who Moran says "represent the age of soldiers, young and ready to go to war." 369th Infantry Regiment flags are draped over amplifiers throughout the stage. The performance's cinematic component comes from experimental filmmaker Bradford Young, with editing by Stefani Saintonge, and dramaturgy from John Akomfrah. We see Young's photos of the Bandwagon trio practicing a deep listening exercise with composer Pauline Oliveros, and then his images of Weeksville, a free 19th-century African-American settlement in Brooklyn, which interrogate the black relationship to ruins and landscape. A blackout void in the screen's center suggests missing history.

Broadly, Moran's musical arrangements for The Absence of Ruin connect Europe's jaunty proto-jazz rags and marches to Moran's own wide-ranging 21st-century jazz. Moran uses songs Europe wrote and performed to trace an approximate narrative of Europe and the soldiers' journey to France and home again.

"I don't really do historical reenactments, and I didn't want to cheat and play a recording in the piece," Moran says. "I wanted to place Europe in that music and the frame of war which existed at the time. It has to be disjunct, because the soldiers on the front lines were burying someone and then had to go out and be chipper and play a concert. So I thought that these songs could have a bit of an edge to them that they could handle all these years later."

There's more purposeful meaning in Moran's song adaptations than a team of the most avid musicologists could hope to find. Moran represents their uses in Europe's world: The relatively familiar "Memphis Blues" was a Hellfighters' anthem played on the bus when they recruited soldiers in black neighborhoods. Moran honors Europe's invention: In Reid Badger's exhaustively researched biography of Europe, A Life in Ragtime, he writes that when the Hellfighters first played the "Marseillaise," French troops were initially too confused by the novelty of Europe's rhythmic arrangement to recognize their own anthem.

Moran offers time-spanning musical gestures throughout the performance: For example, the horns sometimes play lines in reverse, like a tape reeling backward: "It's a way of signaling that we're not just here; we're shuttling back in time," he says. Moran includes both subtle and explicit references to war sounds, which Europe himself used on some of the highly influential Pathé recordings he made upon his 1919 return to New York.

The Absence of Ruin's surreal depiction of war reflects the account of Noble Sissle, Europe's friend and drum major, who wrote an unpublished memoir of Europe. "Coming from civilian life and tumbling into strict military routine was such a sudden change," Sissle wrote. "Life seemed to be moving in a distant world, everything seemed going on in our subconscious minds." That feeling comes through most perceptibly — and eerily — in the performance's funeral songs, the hymn "Flee As A Bird" and Albert Ayler's "Ghosts." Onscreen, photo negatives show white treetops blazing against a dark sky.

All the audiovisual impressionism eventually resolves into some newsreel footage of the 369th regiment arriving home, and marching up New York's Fifth Avenue in a victory parade attended by hundreds of thousands — as the musicians onstage play "Castle House Rag" in aggressive triumph. Finally, we see still close-ups of the Hellfighters' faces staring out from history with something beyond hope or fear: pure presence.

Moran's intricate treatments of renowned, well-documented figures like Monk and Waller were naturally more accessible than this take on the under sung Europe. And his absence of ruin concept may be dauntingly abstract for some. For Moran, it's entirely appropriate if people don't grasp everything they see and hear in this piece: "There's something intrinsic about black abstraction. I think jazz comes out of that, with its idea of seeking the unknown, right? We hear Trane go for it in 58 minutes of 'My Favorite Things' — he's exhausting all the options and keeps looking for more in improvisation. Abstraction sits in the front for me here: These soldiers were really heading into an unknown, a true 'Will we live?' unknown."

Admiration for The Absence of Ruin was unanimous among Berlin JazzFest attendees I met, even when they admitted not being able to decipher it all. The performance's complexity,and nuance suit a figure as multi-faceted as Europe. The project's effectiveness may come down to intimacy, its sense of one broad-minded artist inhabiting the imagination of another and merging it with his own—and always with more modern originality than throwback mimicry.

James Reese Europe survived the conflict in France only to be murdered back home three months after his return, at age 39. To mark the bandleader's premature death, and to counter any lingering association of Europe's march and ragtime styles with quaint exuberance, Moran stages a haunting final scene. "This is not 'play me some of those good old rags,'" says Moran. "I wanted to go out with a message that this performance was a ceremony instead of just a party."

At the close of The Absence of Ruin, one by one the musicians stop playing and gather at the open grand piano, where orange lights strung on the soundboard glow up onto their faces. With Moran's final chords still resonating, performers bow their heads and listen. They clasp hands to create an unbroken circle around the musical grave.

"It's a moment for us to be with Europe's spirit, the soldiers' spirits and the music," says Moran. "We're embracing it all, and then putting it back in the ground until next time. And then we have to keep going."