Accessibility links
Larry Nassar's Survivors Speak, And Finally The World Listens — And Believes : Believed The world watches as more than 200 women and girls confront Larry Nassar at his sentencing hearings. "Little girls don't stay little forever," says one survivor. "They grow into strong women that return to destroy your world." For one week in January 2018, hundreds of women and girls told their stories about Larry Nassar's abuse. Emma Winowiecki/Jodi Westrick/Michigan Radio hide caption 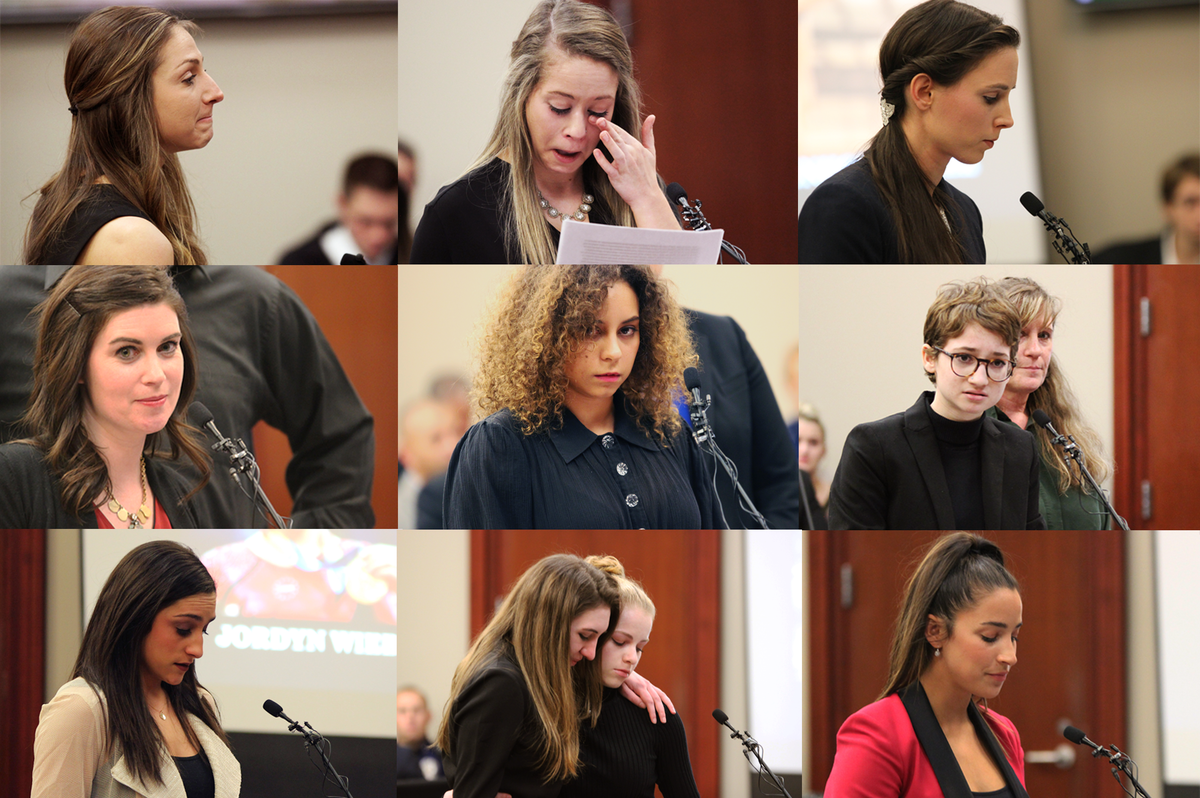 For one week in January 2018, hundreds of women and girls told their stories about Larry Nassar's abuse.

The place is packed. It's jarring to see how young some of the faces in the courtroom are. It's one thing to know that Larry's victims are young. It's another to actually see 15-year-olds sitting with their moms.

Larry is brought in, his hands uncuffed. He sits up at the front, next to his lawyer, in the witness stand. Judge Rosemarie Aquilina wants him there so victims can look at him directly while they make their statements.

Larry is hunched over, in a faded blue jail jumpsuit and orange Crocs.

The lawyers run through some last-minute logistics. And then, it begins.

A young woman in a black dress, hair twisted back off her face, is the first to approach the podium. She's only been known as Victim Z-A.

"Please state your name for the record," Judge Aquilina says.

"I was the first to testify in this case. And, worried the attention that could come with that, asked for complete anonymity," Kyle tells the packed courtroom. "This process has been horrific but surprisingly therapeutic. I'm addressing you publicly today as a final step, in statement to myself, that I have nothing to be ashamed of."

Kyle's mother stands a few steps behind her on her right.

News cameras click click click click, and Kyle's voice shakes as she tells the full courtroom the raw, specific details of Larry's abuse. How it started when she was just 6 years old. How he put his fingers inside her. Masturbated in front of her. Rubbed her feet on his penis.

How her parents didn't believe her.

"After my parents confronted you, they brought you back to my house to speak with me," she tells him. "Sitting on my living room couch, I listened to you tell me no one should ever do that, and if they do, you should tell someone. Well, Larry, I'm here not to tell someone, but to tell everyone." 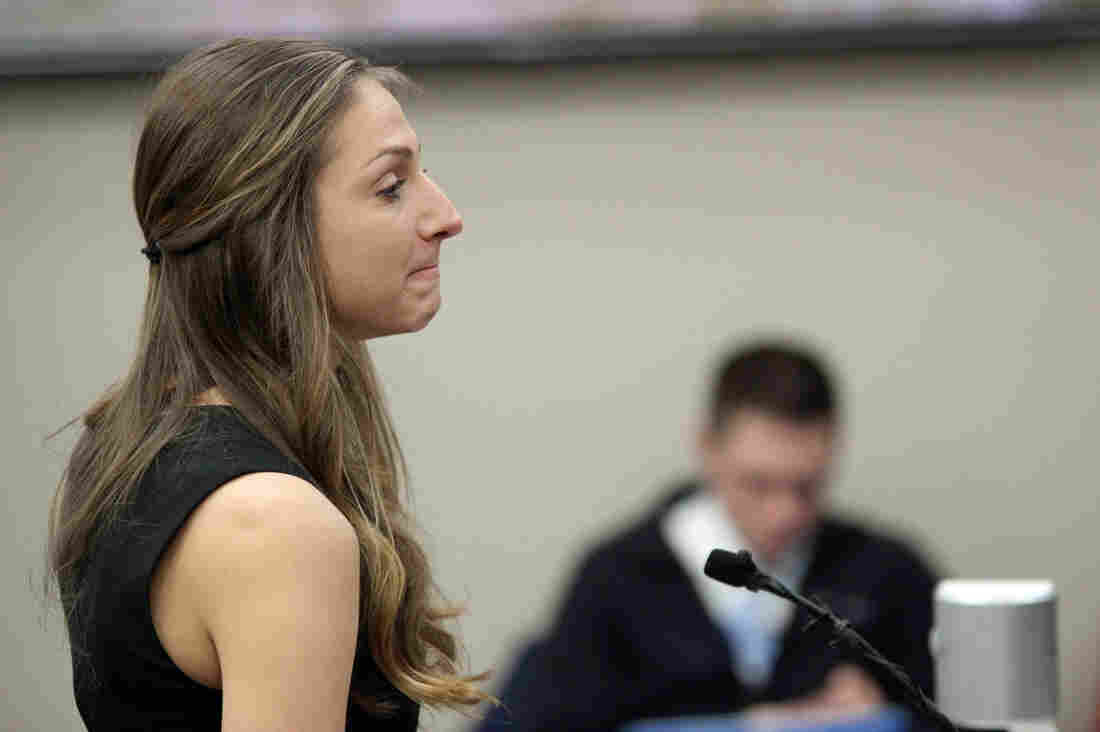 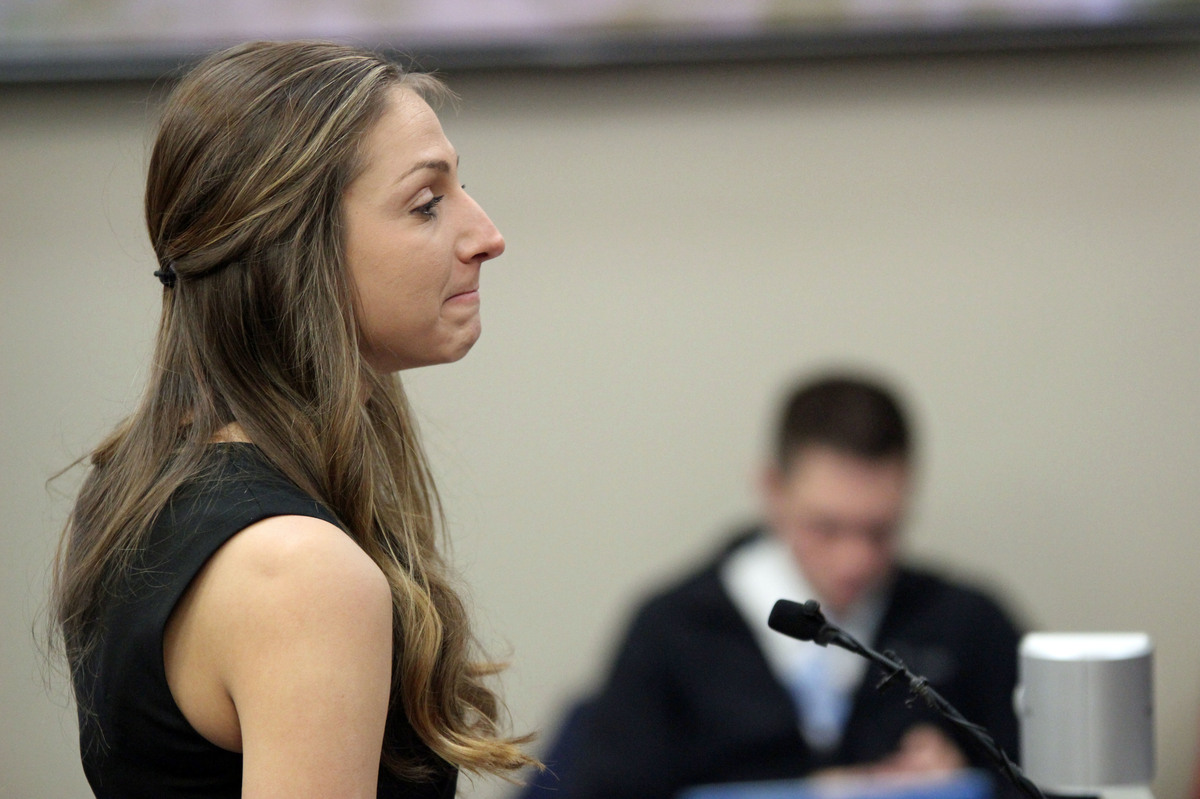 Kyle glances around the courtroom. Then she glares at Larry.

"You used my body for six years for your own sexual gratification. That is unforgivable. I've been coming for you for a long time," she says. "Perhaps you have figured it out by now, but little girls don't stay little forever. They grow into strong women that return to destroy your world."

The crowded courtroom remains quiet as she walks back to her seat.

Going into the first day of Larry's sentencing, prosecutors have said there were about 98 people who wanted to speak in court.

But something happens after that first day.

Survivors who had not yet come forward hear Kyle's words, and begin showing up.

Bekah Snyder works for the prosecutor's office. Her entire job was to help coordinate all the victims. She remembers one mom in particular walking into court:

"[She was] really quiet and stoic and said, 'I need to add my daughter's name to the list.' And I was like, 'OK, great.' I introduced myself and I'm trying to get some information from her and she just starts crying and she goes, 'She just told us last night that she was also abused.' "

Snyder says this is when she starts realizing: There are girls sitting at home, watching this on TV, and realizing they are ready to come forward now, too.

"And the next day being ready to give an impact statement is unbelievable," says Snyder. "But they were empowered by the other women."

Kyle's statement does something else, too.

By using her name, publicly, and putting her face out there on TV for the whole world to see, Kyle sends a message: "I am not ashamed."

At first, a lot of survivors don't want to use their names when they face Larry in court. But after Kyle, that starts to change.

Each day of the sentencing, the crowd in the courtroom gets bigger. More reporters. More cameras. More victims.

And each day, Rachael Denhollander is there. She watches all the survivors give their impact statements. Every single one.

As the final day of sentencing approaches, everybody knows: The woman who started this case would be the one to finish it.

"From the moment I met Rachael, I knew this day would come," she tells the court.

"There was no doubt that she would carry this case," says Povilaitis. "And that the world would hear her and believe her and the truth would be exposed."

It's easy now, with the sheer number of survivors, to forget that for so long, Rachael Denhollander's name was the only one out there.

The other women and girls who came into court during the sentencing mostly didn't know each other. But they knew Rachael. They knew her story. They knew this whole case started with her report. They knew they probably wouldn't be here without her.

They would approach her in the courtroom, shyly, and say, "Thank you." Or, "Can I give you a hug?" She's like a talisman, the unofficial symbol of the Larry Nassar case.

And when she finally stands up to speak, Rachael's words turn out to be less of a victim impact statement and more of a sermon. About all of us.

For Rachael, this whole case comes down to just one question. One she articulated in that courtroom: "How much is a little girl worth? How much is a young woman worth?" 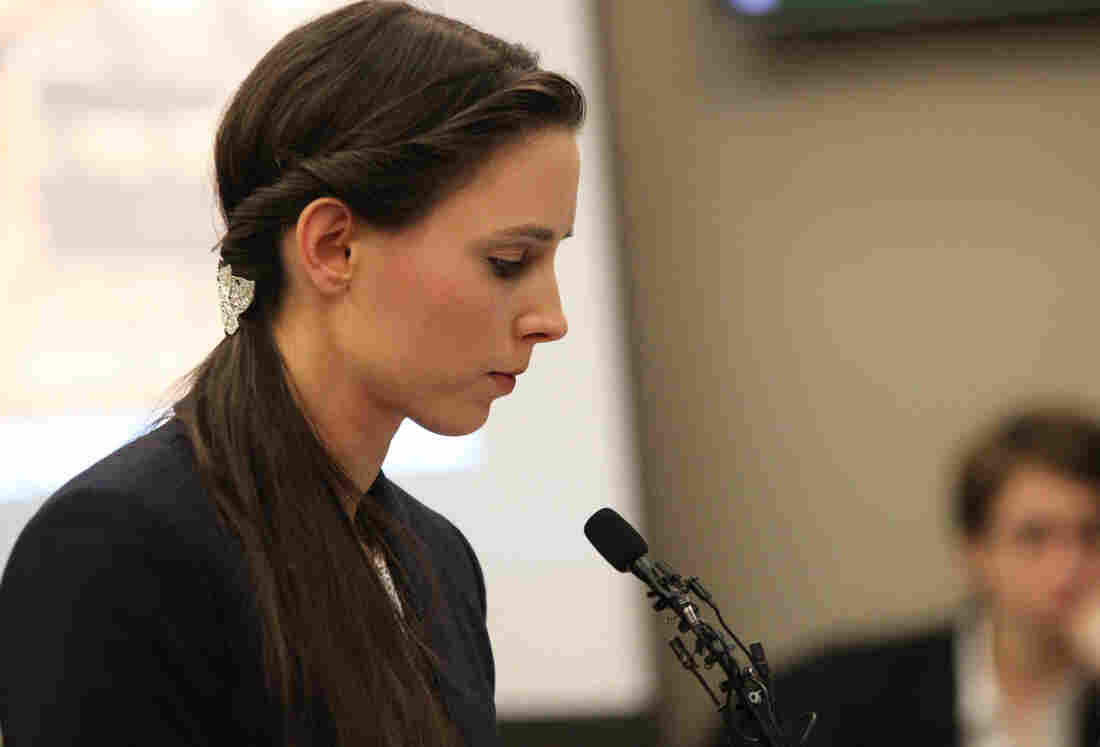 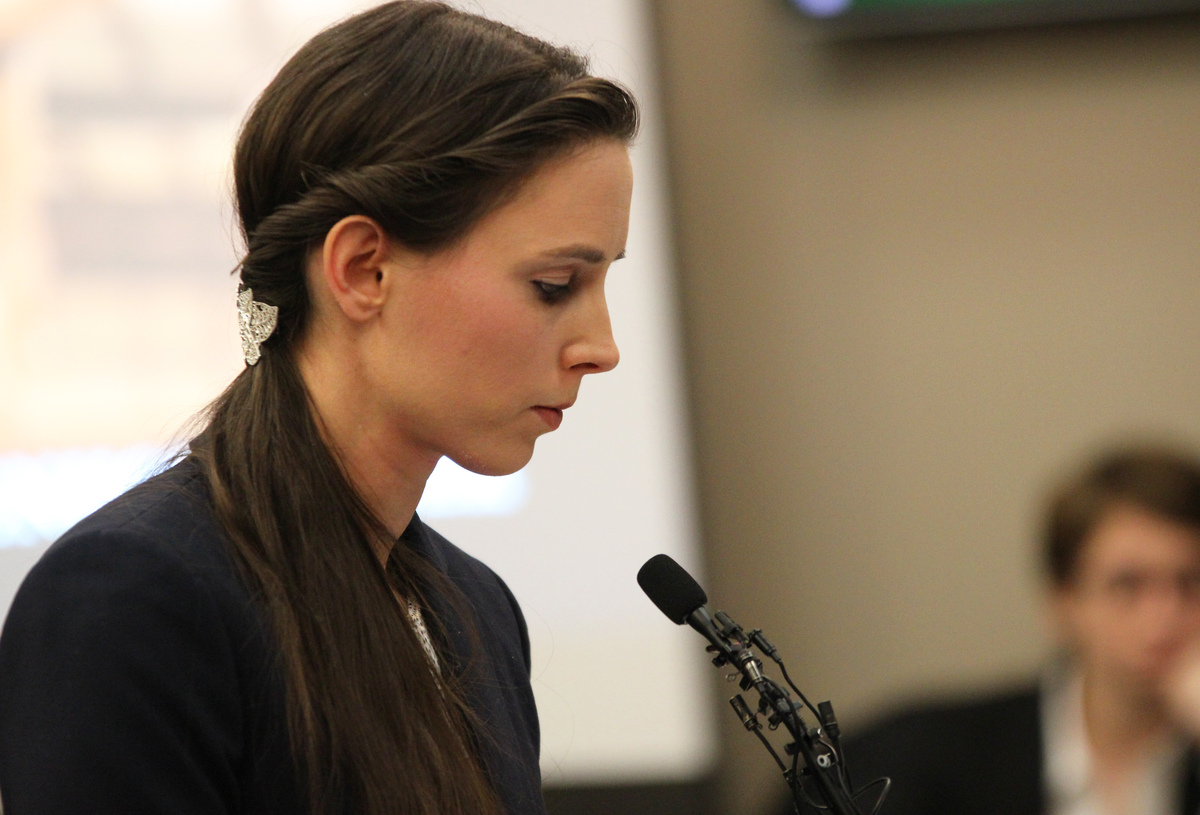 Larry is a predator, Rachael says. But the institutions, the cultures that enabled him — they have failed these survivors too.

Ever since the Nassar scandal became public, the school's president and the trustees have insisted that "determined sexual predators" are impossible to stop, or that the survivors were just "ambulance chasers." Their message was this: This is a Larry Nassar problem, not an MSU problem.

"You issue a press statement saying there was no cover-up, because no one who heard the reports of assault believed that Larry was committing abuse," Rachael says, addressing MSU officials. "You play word games saying you didn't know, because no one believed. I know that. And the reason everyone who heard about Larry's abuse did not believe it is because they did not listen. They did not listen in 1997 or 1998 or 1999 or 2000 or 2004 or 2014. Victims were silenced, intimidated, repeatedly told it was medical treatment and even forced to go back for continued sexual assault."

And for USA Gymnastics, Rachael has this message: Larry Nassar is one symptom of a much larger infection.

"I did not know that at the same time Larry was penetrating me, USAG was systematically burying reports of sexual assault against member coaches in a file cabinet instead of reporting them, creating a culture where predators like Larry and so many others in the organization were able to sexually abuse children, including our Olympians, without any fear of being caught."

And then Rachael turns to her faith, which has guided her through her entire life, but especially through this process of getting justice. And she appeals to Larry's own faith in God.

After Rachael offers Larry forgiveness, she addresses us. And you. The people who watched this sentencing, this case, play out in a way we've never seen before.

Finally, she makes a plea to Judge Rosemarie Aquilina: Give Larry the maximum sentence the plea agreement allows. "Send a message that these victims are worth everything ... because everything is what these survivors are worth."

Aquilina announces her sentence: 40 to 175 years in prison.

"I just signed your death warrant," she tells him.

Larry Nassar turns, head down, as he is escorted out of the courtroom.

The entire courtroom — survivors, parents, coaches, friends, dozens and dozens of people who have been so damaged by a man they trusted — breaks into sustained, enthusiastic applause.