Accessibility links
Will Ethiopia's Democratic Awakening Catch On Next Door In Eritrea? Ethiopia has stunned the world with its reforms. Eritreans face steep challenges if they want to follow suit. 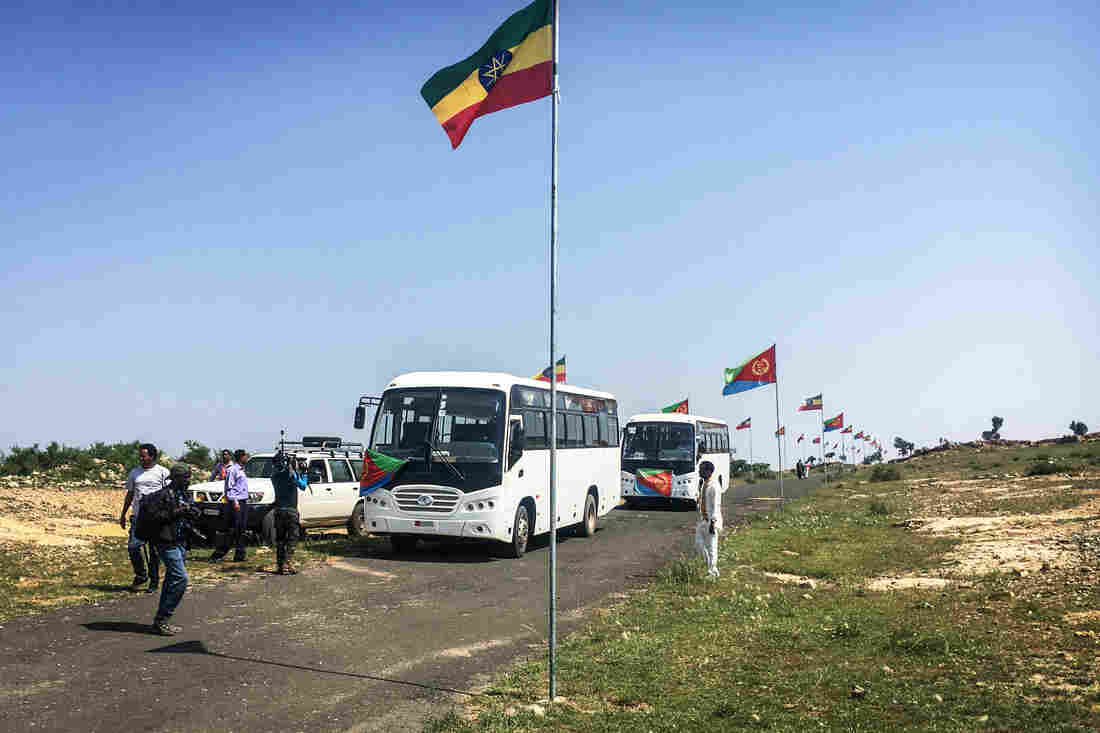 National flags are seen along the road to Eritrea in Zalambessa, northern Ethiopia, in September before a border reopening ceremony. Two land border crossings between Ethiopia and Eritrea were reopened for the first time in nearly 20 years. AFP/Getty Images hide caption 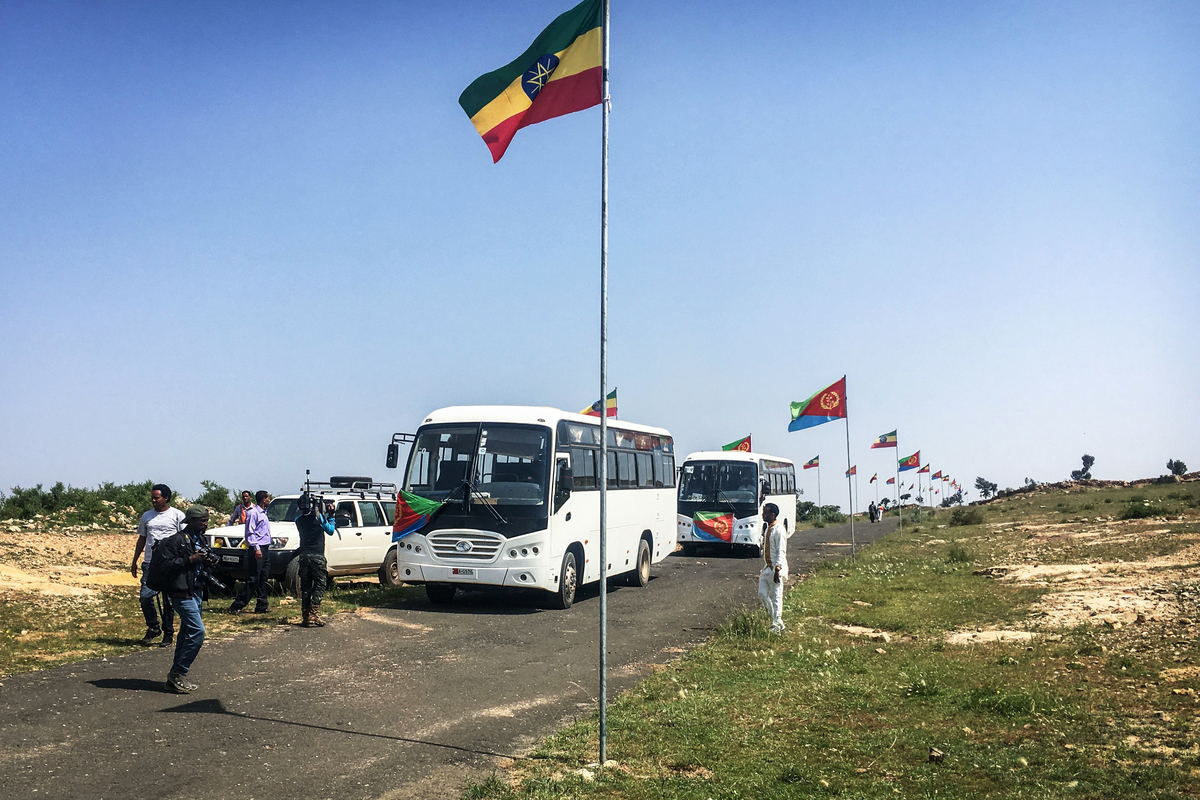 National flags are seen along the road to Eritrea in Zalambessa, northern Ethiopia, in September before a border reopening ceremony. Two land border crossings between Ethiopia and Eritrea were reopened for the first time in nearly 20 years.

About a mile from the Eritrean border in Zalambessa, Ethiopia, there's a small building made of corrugated metal.

There's not much inside, except for some sleeping mats and clay pots for coffee. But dozens of Eritreans have made it into a home, while they wait for the Red Cross to take them to refugee camps.

Over the past year, Ethiopia has stunned the world with its democratic reforms and warming relationship with neighboring Eritrea. The two countries have formally ended their 20-year conflict and reopened land crossings to allow people and goods to move freely between them. Now, a big question fills the air in the region: Will the dramatic transformation in Ethiopia spread to Eritrea, which is often referred to as the North Korea of Africa?

Sirak, 17, came to Ethiopia from Eritrea more than a month after the border opened in September. He wants only his first name used because he is afraid Eritrean authorities could seek retribution for his actions or criticism. Now, he spends his time walking around Zalambessa, marveling at the lack of troops on the streets and the frankness of conversations.

He says his family's home in Eritrea was demolished by the government, and police wanted to know why they had built the house without permission.

"The police were coming every day, so everyone was hiding in the bush," he said.

Forced evictions and home demolitions have been a well-documented form of political retribution in Eritrea, whose government has never held an election and has been accused of brutal human rights abuses almost since its independence in 1993.

Asked if he believes things can change in Eritrea, Sirak demurs.

Sirak appears meek and fearful compared with today's Ethiopians, who are celebrating their newfound freedoms with swagger. Long under authoritarian rule, now Ethiopians can gather in groups to talk freely. They can criticize their government without fear they'll be arrested.

Many Ethiopians along the border say Eritrea has to change also. They say when Eritreans come to Ethiopia, they will experience a freer society and they will demand the same at home.

'Peace Is Everything': Ethiopia And Eritrea Embrace Open Border After Long Conflict

"It's not fair to make that comparison," says Salem Solomon, an Eritrean-American journalist who covers the two countries for Voice of America. Ethiopia and Eritrea have completely different political systems, she says.

Salem lived in Eritrea until 2007; she went through military training and worked for the Information Ministry before she came to the United States. In Eritrea, says Salem, the government is omnipresent — the command economy and mandatory military service are just some of the ways it controls people's lives. Salem says the government stays in power by doling out unpredictable punishments. That creates an atmosphere of intense fear. 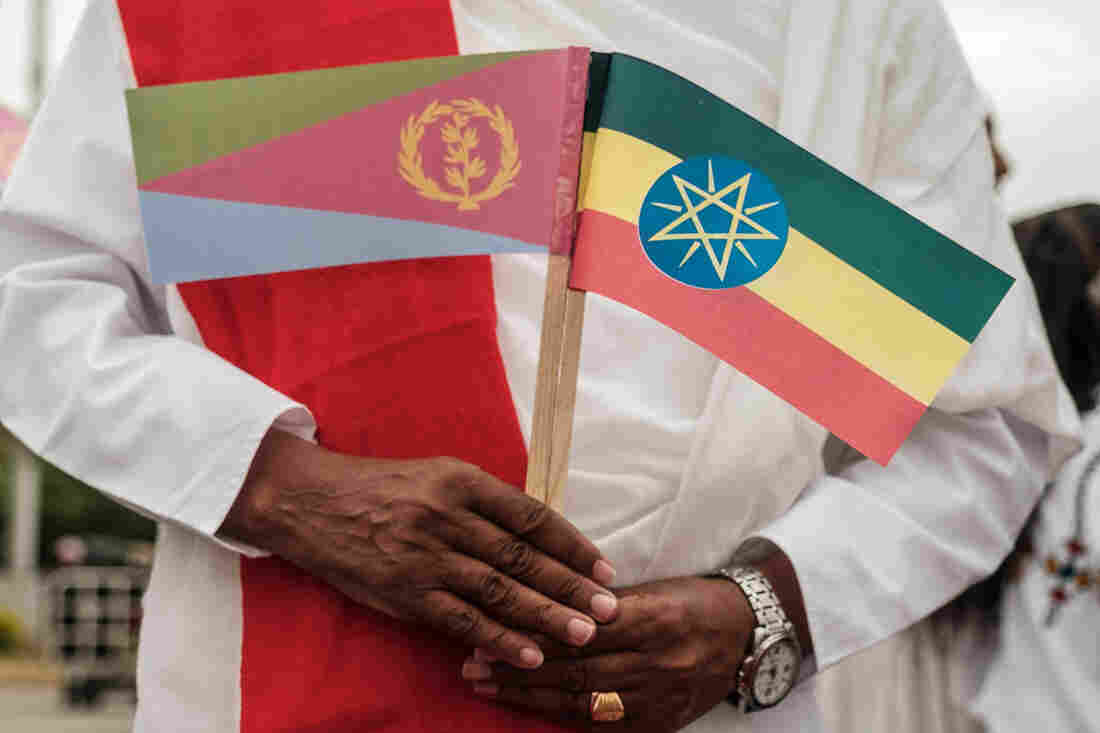 A man holds national flags of Eritrea (left) and Ethiopia as he waits for the arrival of Eritrea's president at the airport in Gondar, nothern Ethiopia, in November. Eduardo Soteras/AFP/Getty Images hide caption 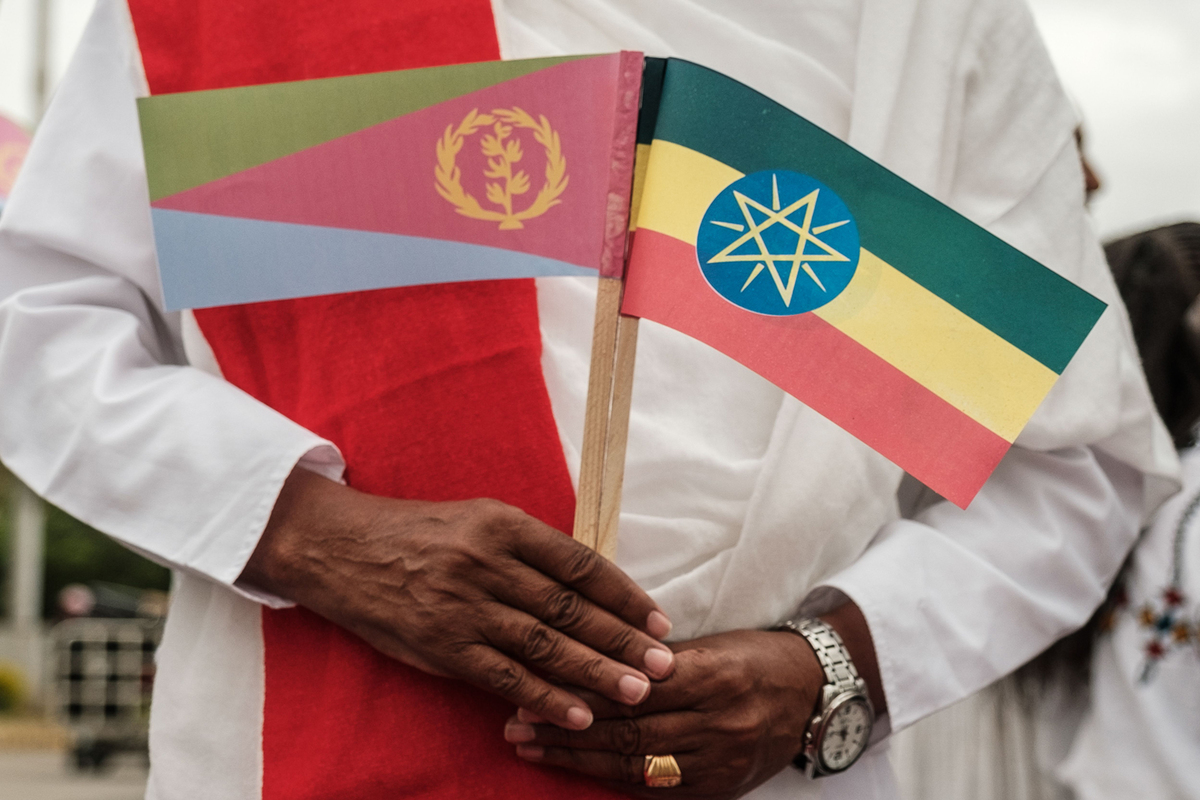 A man holds national flags of Eritrea (left) and Ethiopia as he waits for the arrival of Eritrea's president at the airport in Gondar, nothern Ethiopia, in November.

"Even those who feel like they are so loyal and [are] vocal [about their] support for the government," even they, she says, are not safe.

Awet Weldemichael, who studies Eritrea at Queen's University in Canada, says another reason to be skeptical about any potential uprising is that Eritrea has been "hemorrhaging" youth.

Eritreans have been leaving the country by the thousands since it gained independence from Ethiopia in 1993. Scholars estimate that a third of Eritreans live outside the country. And since the borders with Ethiopia reopened in September, about 10,000 Eritreans have sought asylum in Ethiopia.

"And so in light of that ... the agents of change are not there," says Awet.

If change is to come, he says, it is unlikely to happen the way it did in Ethiopia, forced by years of protests. Instead, if change comes, it will most likely have to be pushed from the top.

Awet does warn, however, that Eritrea is such a closed country, it's hard to make predictions.

"What I can tell you confidently," he says, "is that the current course is unsustainable for Eritrea."

In November, the United Nations lifted sanctions against Eritrea. But that's unlikely to help, because it was mostly a weapons ban. Eritrea remains one of the poorest countries on the continent. Most of its people live below the poverty line, and 80 percent are subsistence farmers in a land susceptible to droughts. Over the years, Awet says, the population has been decimated by migration and by mass incarceration, and many helpful institutions have been destroyed or have ceased to exist.

In Badme, a border town about 200 miles west of Zalambessa, the border crossing is not yet officially open. Eritrean officials have warned that the road into Ethiopia still contains land mines.

But one Eritrean mother made her way across anyway. She was trying to hitch a ride back to Eritrea, so she sat right on the border, caressing the cheek of her 9-year-old boy.

She's too afraid of the Eritrean government to share her name. Seven months ago, while she was cooking, her son ran away to Ethiopia with a friend.

As soon as it became possible, she packed up her things and came to look for him. She found him at a refugee camp outside Badme.

She says her boy was not the only kid fleeing Eritrea. She has seen many small children leave their homes and families behind.

"They're too young to know anything about the government or democracy," she says. "But what they know is that there is a better life outside of Eritrea."