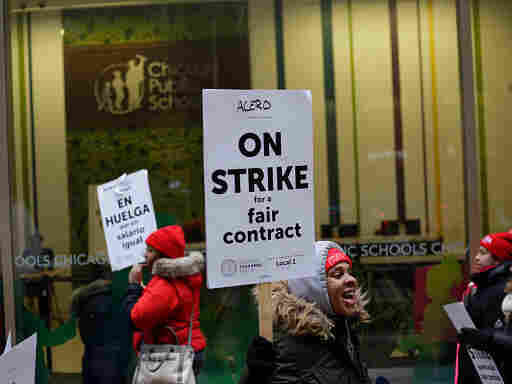 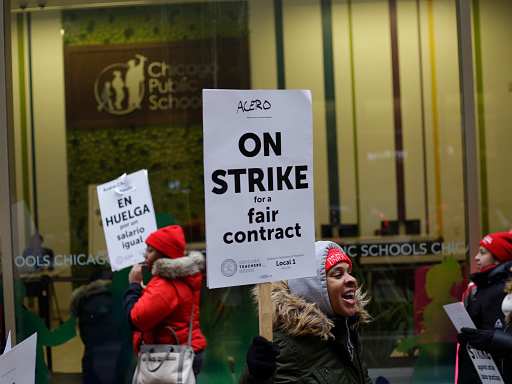 Educators from the Acero charter school network hold signs as they protest during a strike outside Chicago Public Schools headquarters.

The nation's first charter school teacher strike started Tuesday as over 500 teachers walked out of 15 schools to demand better pay, smaller classes and better resources. These teachers join thousands of public school employees who walked out of the classroom earlier this year with similar demands.

Teachers for the Acero Schools network, which manages the 15 charter schools, earn almost $13,000 less on average than Chicago Public School teachers. It's reasons like this that brought Randi Weingarten, the president of American Federation of Teachers, the second largest teachers union, out to Chicago to offer her support. (The AFT has also been very critical of charter schools in the past.)

Tens of thousands of students are currently enrolled in schools operated by the for-profit college chain, Education Corporation of America. But according to NPR's Vanessa Romo, it's unclear how many are expected to graduate at the end of the term. That's because ECA is closing dozens of schools around the country.

The move this week to close schools came just a day after the company lost its accreditation and funding. ECA has also been engulfed in financial trouble, falling behind on rental payments and facing eviction in some cases.

A new report from Education Week finds that number of special ed teachers has dropped almost 17 percent over the last ten years. And the shortage is outpacing student growth. Over that same ten-year period, the number of students with special education needs dropped only 1 percent.

As we reported last week, Education Secretary Betsy DeVos' new policies on how to implement Title IX, which bars gender discrimination in schools receiving federal funds, are open for public comment. A public campaign by the anti-sexual-assault organization It's On Us is organizing students to submit comments.

Tennessee was already known for its pioneering Tennessee Promise program, the first of now 12 statewide free-tuition programs. Now, Music City has created a program that will ultimately help a few thousand students cover expenses like textbooks and transportation as well. It's part of a broader policy debate about the financial barriers to completing college.

If 'Free College' Sounds Too Good To Be True, That's Because It Often Is

School spending is up, according to federal data

This was one of the biggest issues that came up in the world of education this past November: spending. From teacher pay to resources, educators across the country wanted more money to be poured back into public schools. And now, a new report from the Department of Education says that spending is, in fact, increasing.

Here's the caveat: State budgets took a major hit in 2008 during the recession, and while spending has increased, there are many states that still haven't returned to those pre-recession funding levels.