Accessibility links
Dueling U.S. Agendas As U.N. Climate Change Summit Enters Crucial Final Week The U.S. hosted an event on coal and refused to endorse the findings of a dire climate science report. And yet, in official negotiations, the U.S. is working out how to implement the Paris agreement. 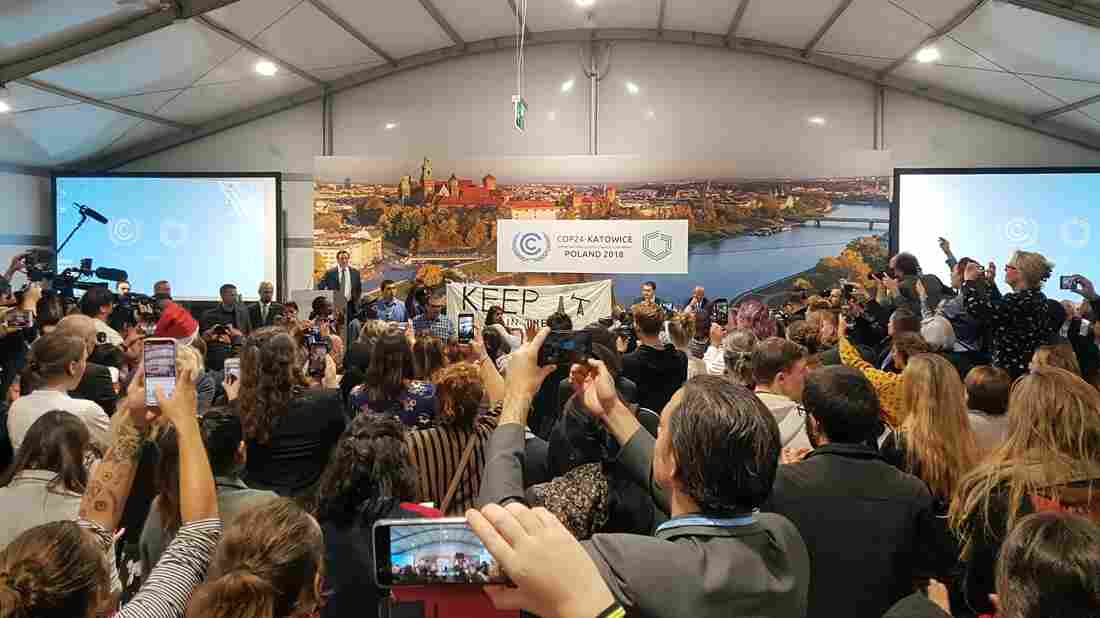 Protesters disrupted a U.S. side event on the future importance of fossil fuels at the COP24 conference in Katowice, Poland, on Monday. Separately, U.S. negotiators are helping to write a rule book that will help countries reduce greenhouse gas emissions. Frank Jordans/AP hide caption

As the international climate summit in southern Poland enters its second and final week, most countries agree on the basic scientific facts: greenhouse gasses are causing climate change, and every country is feeling its effects.

But the United States, under the leadership of President Trump, has taken a different view. The administration questions the overwhelming scientific evidence suggesting that human activity is causing the climate to warm. As a result, the U.S., which has been a leader in past negotiations, is playing unpredictable role in this year's summit.

In the coming days, delegates from all over the world need to solidify the so-called rulebook they'll use to monitor their progress reducing emissions, finance the global shift away from fossil fuels and set even more ambitious emissions reduction goals in the near future. So far, countries have not successfully reduced global emissions; the biggest climate pollutant, carbon dioxide, increased in 2017 for the first time in years.

One tool that was supposed to help countries set rules for reducing emissions is a report released in October by the U.N., which laid out in plain terms the scientific reality: Global emissions must go down 40 percent to 50 percent by 2030 to keep the Earth from warming 2.7 degrees Fahrenheit, which is the upper limit if we collectively hope to avoid the most catastrophic effects of climate change.

But over the weekend, that report became a sticking point for negotiators at the COP24 summit. A handful of countries, including the U.S., refused to sign off on a statement endorsing the report's findings. The U.S. joined Russia, Kuwait and Saudi Arabia in opposing an outright endorsement.

That's in keeping with the current administration's climate policy. Trump announced last year that he intends to withdraw the U.S. from the Paris climate agreement in 2020, and the federal government has tried to roll back emissions regulations and has moved to emphasize fossil fuels.

"I think the administration's posture, its threat to withdraw from the agreement, its rollback of domestic climate policies, certainly has weakened the U.S. influence in this process," says Elliot Diringer of the Center for Climate and Energy Solutions, a nonprofit environmental group in the U.S.

The administration's position was made doubly clear on Monday, when the U.S. government hosted an event about the future importance of coal and nuclear technology.

"The reality is that countries will continue to use fossil fuels," said event moderator Wells Griffith, the Department of Energy's leader for international energy issues. "We're here at the [conference] today to share our balanced approach to economic growth and environmental protection."

"The United States is now the No. 1 combined oil and gas producer in the world," he said. "All energy sources are important, and they will be used unapologetically."

At one point during the event, the majority of the people in the audience started laughing in unison, and then stood to shout protests, including the chant "Keep it in the ground."

But those who have attended climate conferences for many years warn that political side events and squabbles over language can distort the role of the U.S. in the larger negotiations. Even as the White House is touting its message that fossil fuels are here to stay, the U.S. is involved in negotiations about how to phase out such energy sources.

"The U.S. is quite active in the negotiations, especially on the transparency side," says Yamide Dagnet, a policy analyst at the World Resources Institute think tank and an adviser to some countries at this year's summit.

She says the U.S. has spent decades pushing for nations to be more transparent about, for example, how they measure their own greenhouse gas emissions. Such questions are the foundation for the rule book being written this week, and the U.S. is still a crucial voice in deciding what happens.

"The U.S. does remain a player. Other governments are interested in meeting with U.S. negotiators to see what they have to say," Diringer says. "I don't think you can write off U.S. influence in this process, but unfortunately the U.S. is no longer in a position to provide the leadership it has in the past."