Accessibility links
Voyager 2 Bids Adieu To The Heliosphere, Entering Interstellar Space The milestone makes the 41-year-old NASA probe just the second human-made object, after Voyager 1, to reach such distant regions. Now, Voyager 2 is over 11 billion miles from the sun — and counting. A NASA illustration depicts the positions of both Voyager 1 and Voyager 2 probes, now outside the heliosphere. Voyager 1 left the heliosphere in August 2012, while Voyager 2 left at a different location last month. NASA/JPL-Caltech hide caption 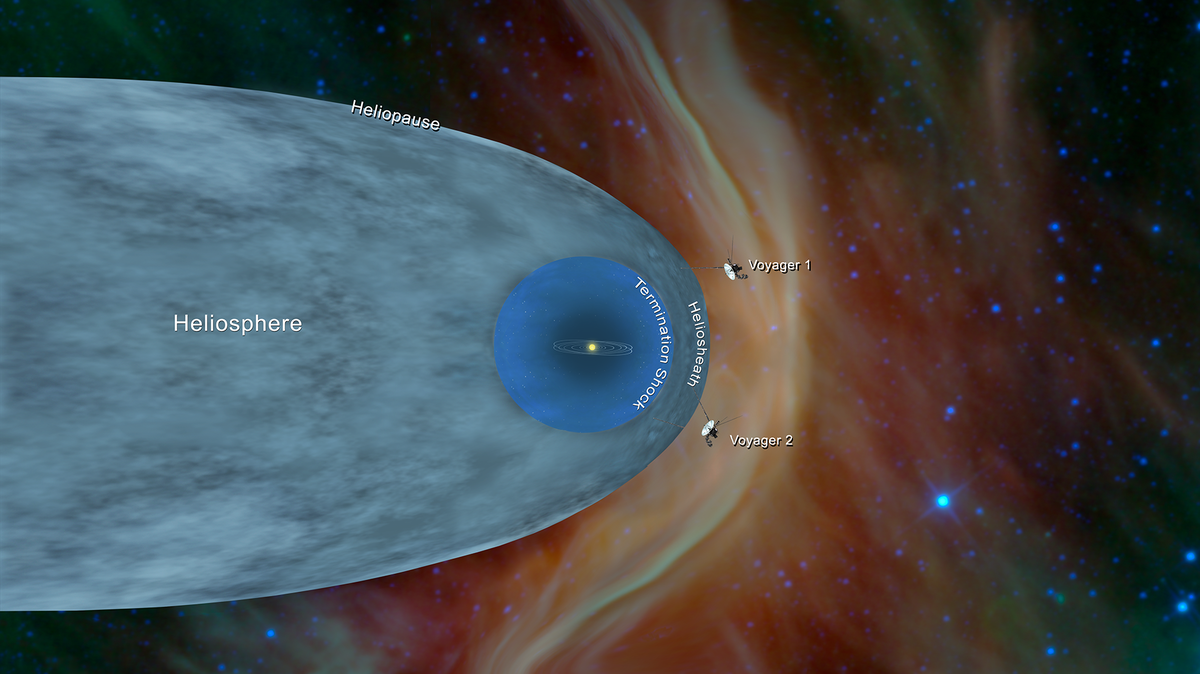 When you hit your 40s, it's only natural to want to try new things.

That little platitude holds true not only for those suffering midlife crises, but also, apparently, for at least one spacecraft launched by NASA. Just a few months after celebrating its 41st birthday, the Voyager 2 probe has left its familiar environs and entered interstellar space — only the second human-made object in history to do so, after Voyager 1 did it in 2012.

"I think we're all happy and relieved that the Voyager probes have both operated long enough to make it past this milestone," Suzanne Dodd, the Voyager project manager at NASA's Jet Propulsion Laboratory, said in a statement released Monday. "This is what we've all been waiting for."

To Infinity And Beyond: Celebrating The Voyager Mission

The moment they were waiting for arrived early last month, when Voyager 2 left what's known as the heliosphere — the vast bubble of plasma and particles generated by the sun and stirred in solar winds. This bubble ends at a boundary called the heliopause, where the sun's magnetic field peters out and solar winds give way to interstellar space.

NASA concluded the probe had crossed the heliopause when a key instrument on board "observed a steep decline in the speed of the solar wind particles on Nov. 5," the JPL said. "Since that date, the plasma instrument has observed no solar wind flow in the environment around Voyager 2, which makes mission scientists confident the probe has left the heliosphere."

The @NASAVoyager 2 probe no longer feels the solar wind & is flying through the interstellar space between the stars. It carries a working instrument providing 1st-of-its-kind observations of the nature of this gateway. Here's a look by the numbers: https://t.co/DuNBYPaXQj #AGU18 pic.twitter.com/GJGIgDpSHD

By one definition, that also means Voyager 2 — now more than 11 billion miles from the sun — has achieved another, much simpler-to-say feat: leaving the solar system.

It's not the only definition, though. And the JPL itself marks the end of the solar system at the edge of the sun's gravitational influence, on the outer boundaries of the Oort Cloud. By that measure, the lab explained, both Voyager probes "have not yet left the solar system, and won't be leaving anytime soon."

Of course, that's a rather long time — particularly when one considers that the Voyager probes are already massive overachievers when it comes to longevity.

Launched 16 days apart in 1977, the two spacecraft completed their original mission — observing Jupiter and Saturn — in the early 1980s before turning their focus to Uranus, Neptune and beyond. It was nearly two decades ago that Voyager 2 made its fly-by past Neptune, the outermost planet of the solar system (since Pluto's tragic demotion, at least).

"It's really two generations ago" that the probes launched, Dodd said.

"You can think of what the technology was. Your smartphone has 200,000 times more memory than what the Voyager spacecraft have," she added. "So it's just exciting that we've been able to get it into interstellar space."