Accessibility links
Buffeted By Brexit Woes, Theresa May Embarks On Whirlwind European Tour A day after the prime minister delayed a critical vote on her Brexit deal, May has hit the road in search of assurances from European leaders — while political turmoil churns back home. 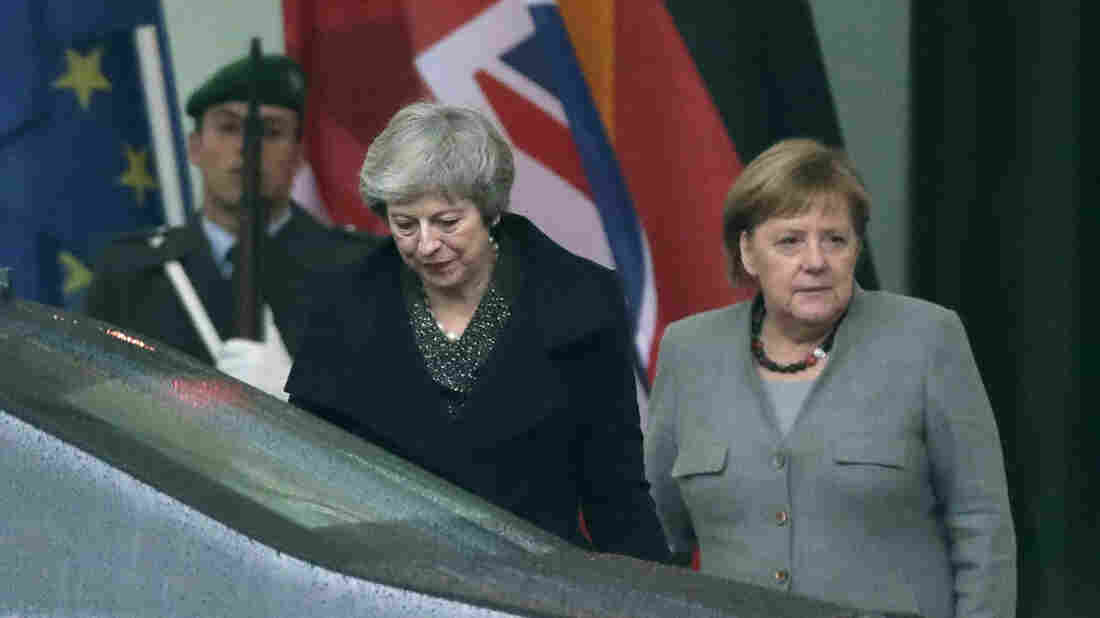 British Prime Minister Theresa May (center) leaves a meeting Tuesday in Berlin beside German Chancellor Angela Merkel. Faced with turmoil back home, May has embarked on an international trip to shore up assurances from the European Union. Michael Sohn/AP hide caption 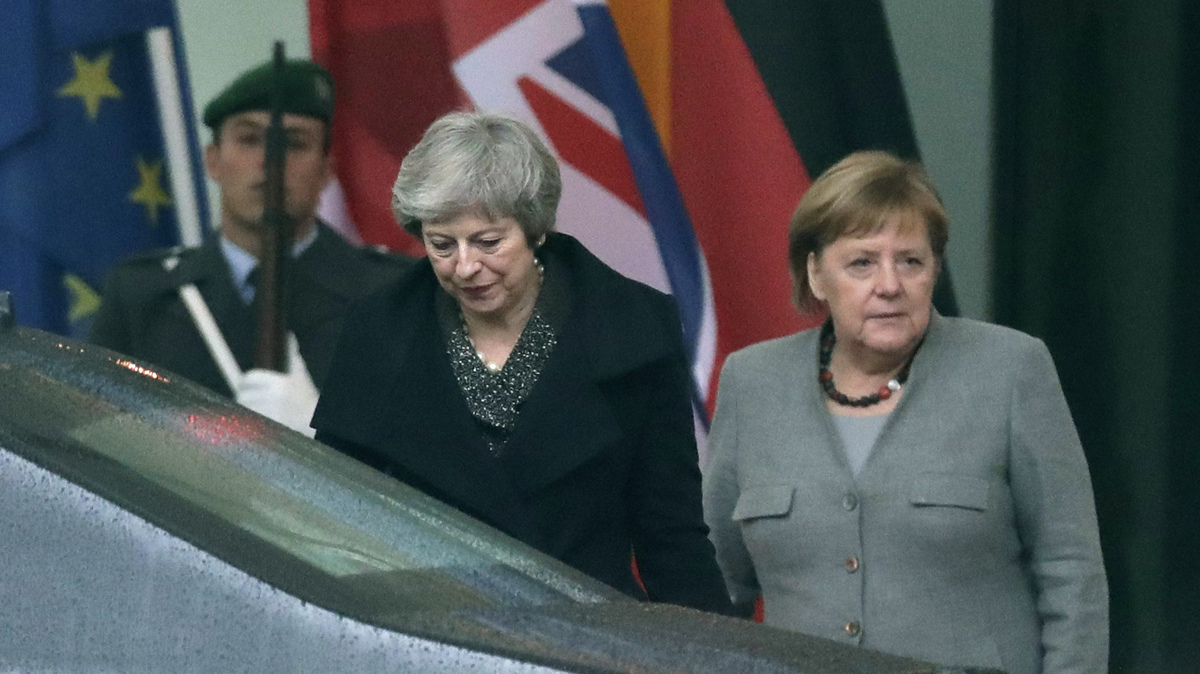 British Prime Minister Theresa May (center) leaves a meeting Tuesday in Berlin beside German Chancellor Angela Merkel. Faced with turmoil back home, May has embarked on an international trip to shore up assurances from the European Union.

What happens to a deal deferred?

That's the question lingering like a storm cloud over the U.K. For weeks, British lawmakers had eyed Tuesday with mounting anticipation. It was to be the day Parliament voted on the draft Brexit deal, a pivotal test for Prime Minister Theresa May's agreement with the European Union — until, all of a sudden, it wasn't.

Now, after May postponed the vote, admitting the deal would have suffered a resounding defeat, the embattled prime minister is hundreds of miles from the Houses of Parliament. Instead, she's on the continent, trying to persuade her counterparts in the EU to make the agreement more palatable for its many skeptics in the U.K.

And so far, May's European tour has encountered some turbulence.

"There is no room whatsoever for renegotiations," European Commission President Jean-Claude Juncker told members of the European Parliament on Tuesday, pausing as applause rippled through the chamber.

He confirmed that he would be meeting with May later in the day, but said he remains convinced that the draft Brexit deal "is the best — and only — deal possible."

I will meet @theresa_may this evening in Brussels. I remain convinced that the #Brexit deal we have is the best - and only - deal possible. There is no room for renegotiation, but further clarifications are possible.

Earlier in the day, in Berlin, May met with German Chancellor Angela Merkel. There, after some brief, unfortunately timed trouble just getting out of her car, May reportedly received the same answer: renegotiation was simply out of the question.

European Council President Donald Tusk, after vowing that "we will not renegotiate the deal," said on Twitter that he, too, had sat down with May for a "long and frank discussion."

UK PM Theresa May arrives in Berlin for talks with Germany's Angela Merkel aimed at rescuing her #Brexit dealhttps://t.co/UItujODwwF pic.twitter.com/HApPz3tyNA

Still, the response May received in Europe, adamant as it was, has proved considerably tamer than the anger and frustration she left behind in London.

Since she announced the vote's postponement in Parliament, the headwinds buffeting the deal from both the right and the left have only grown stronger.

Among members of her own Conservative Party, one major crux of the frustration rests with the status of Northern Ireland, a nation of the U.K. that shares an open border with the Republic of Ireland, an EU member. Many of the hard-line Brexiteers believe that the deal's "backstop," the plan of last resort if no other arrangement is reached, would leave the U.K. too wedded to EU regulations.

And these Brexiteers, MP Jacob Rees-Mogg among them, have revived their bid to force a no-confidence vote on May as party leader. So far, it remains unclear whether they have obtained the 48 letters needed to do so, but reports — fueled by anonymous sources speaking to media — are swirling that their goal is within reach. 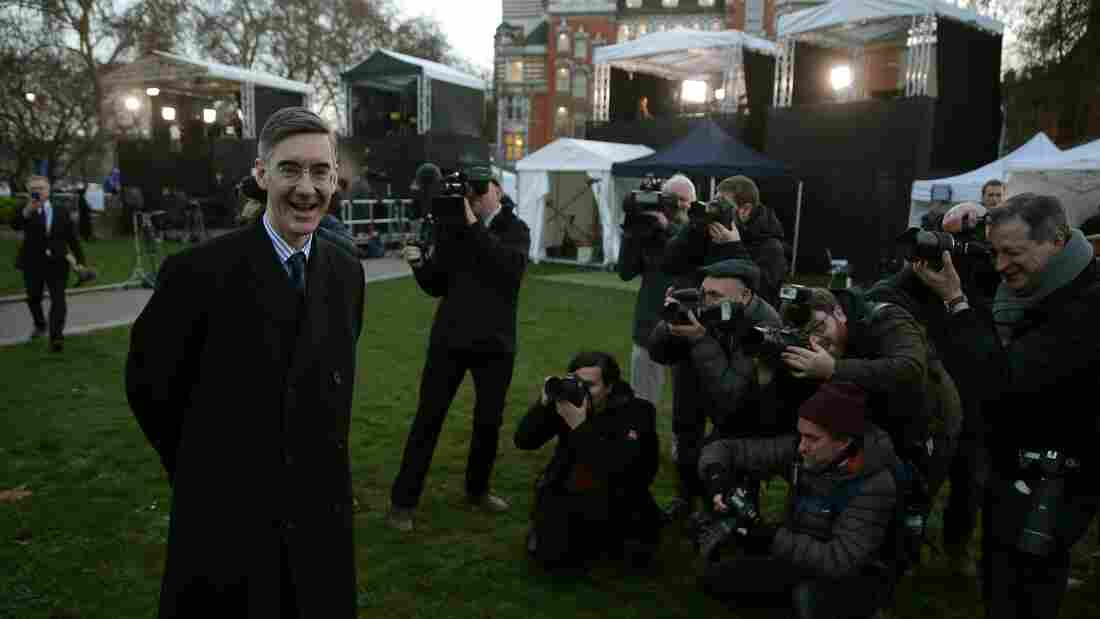 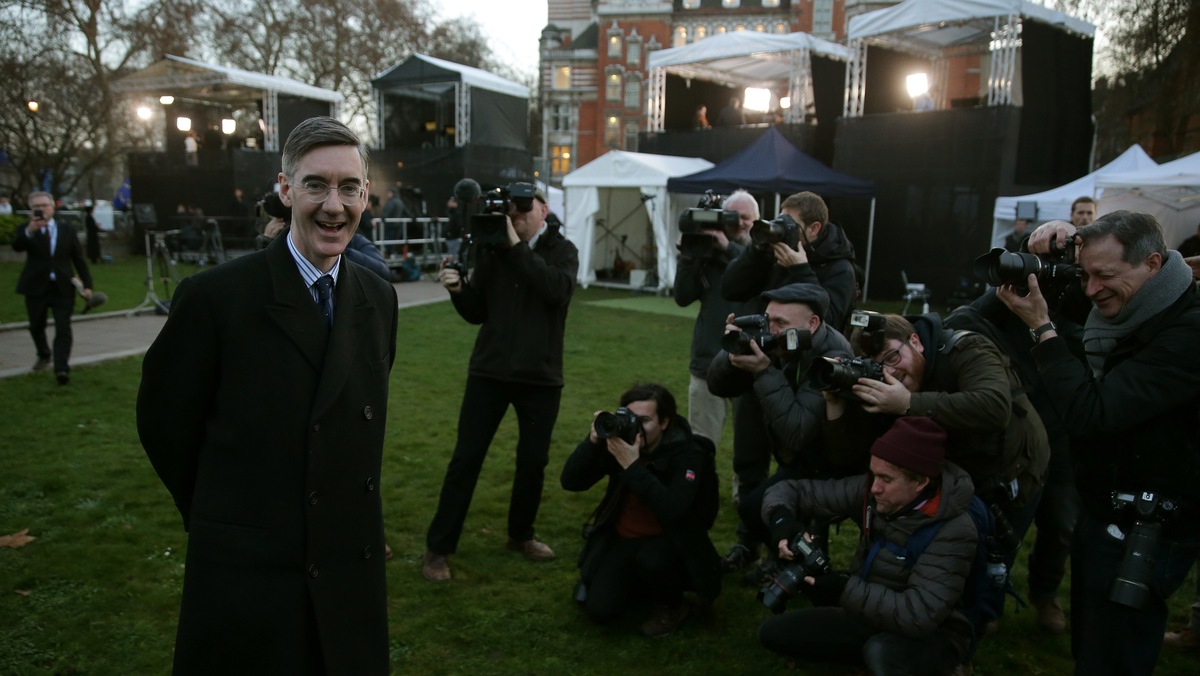 Conservative member of Parliament Jacob Rees-Mogg, a hard-line Brexit supporter, poses for photographers Tuesday outside the Houses of Parliament in London.

"I do detect that in the last 24 hours, people have decided that this isn't going to work out at all," Iain Duncan Smith, a former Conservative leader, told British broadcaster ITV. "And I have heard from a number of colleagues — I can't name them now — that they were people that wouldn't have put letters in and now are openly saying, 'My letter's going in.' "

They're not the only ones to have raised the prospect of a no-confidence vote, though.

On the other side of the aisle, among opposition lawmakers, the debate has centered on whether to push for a challenge of their own — not to May's party leadership, but to her government as a whole. 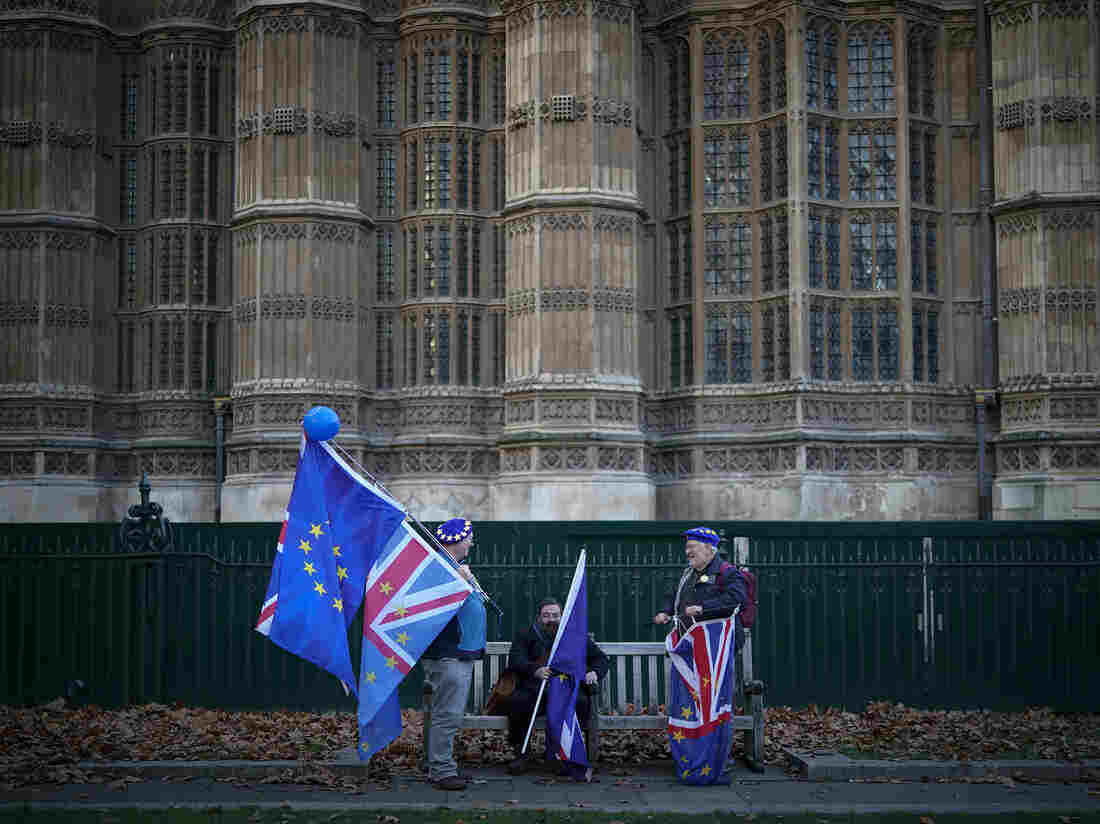 Demonstrators take a break Tuesday outside the Palace of Westminster in London, where a critical parliamentary vote on the draft Brexit deal was postponed a day earlier. Christopher Furlong/Getty Images hide caption 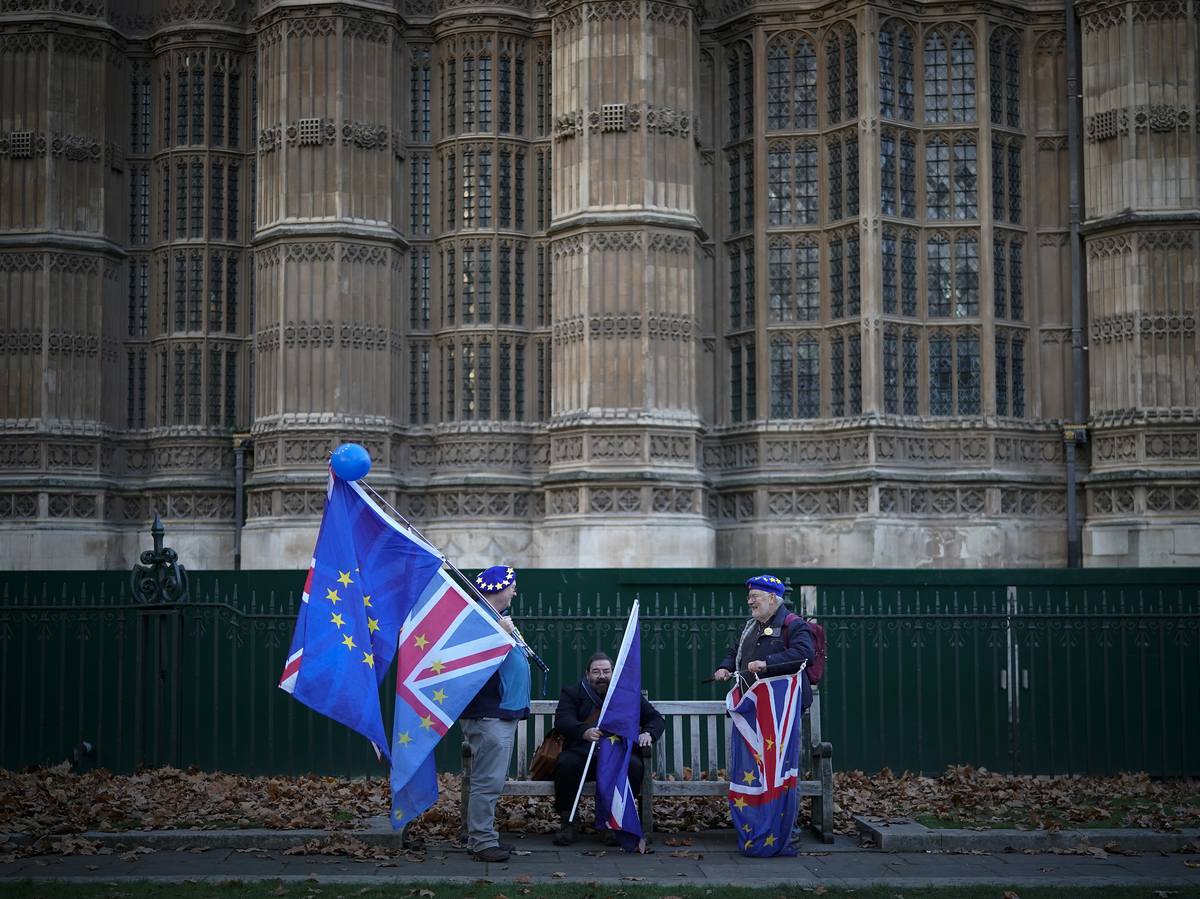 Demonstrators take a break Tuesday outside the Palace of Westminster in London, where a critical parliamentary vote on the draft Brexit deal was postponed a day earlier.

"Time is running out and the [prime minister's] tactic is clearly to run down the clock. The opposition must not allow that to happen," Scottish First Minister Nicola Sturgeon tweeted Tuesday, one day after declaring the Scottish National Party's support for a no-confidence vote if the Labour Party seeks one.

So far, however, Labour leaders themselves have resisted that call, saying they're waiting until "the best opportunity to topple this rotten Government."

"We are fully prepared to bring a no-confidence vote for the purpose of defeating the government and forcing a general election," Labour Party Chairman Ian Lavery said in a recorded statement. "But we aren't going to table one just for it to be defeated, which would strengthen May and unite the Tories."