Accessibility links
Huawei Executive Granted Bail In Canada, Former Canadian Diplomat Is Detained In China Michael Kovrig reportedly was taken into custody but China has not acknowledged it. Chinese tech executive Meng Wanzhou faces extradition from Canada to the U.S. to be tried on fraud charges. 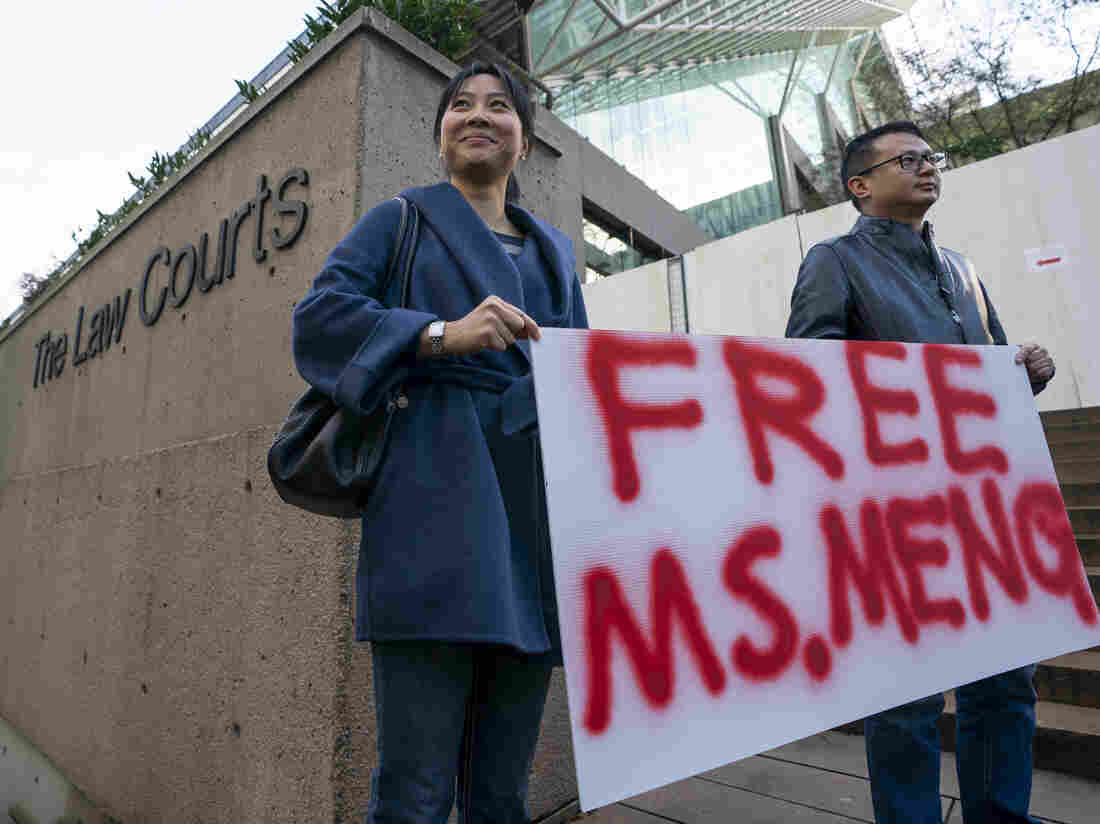 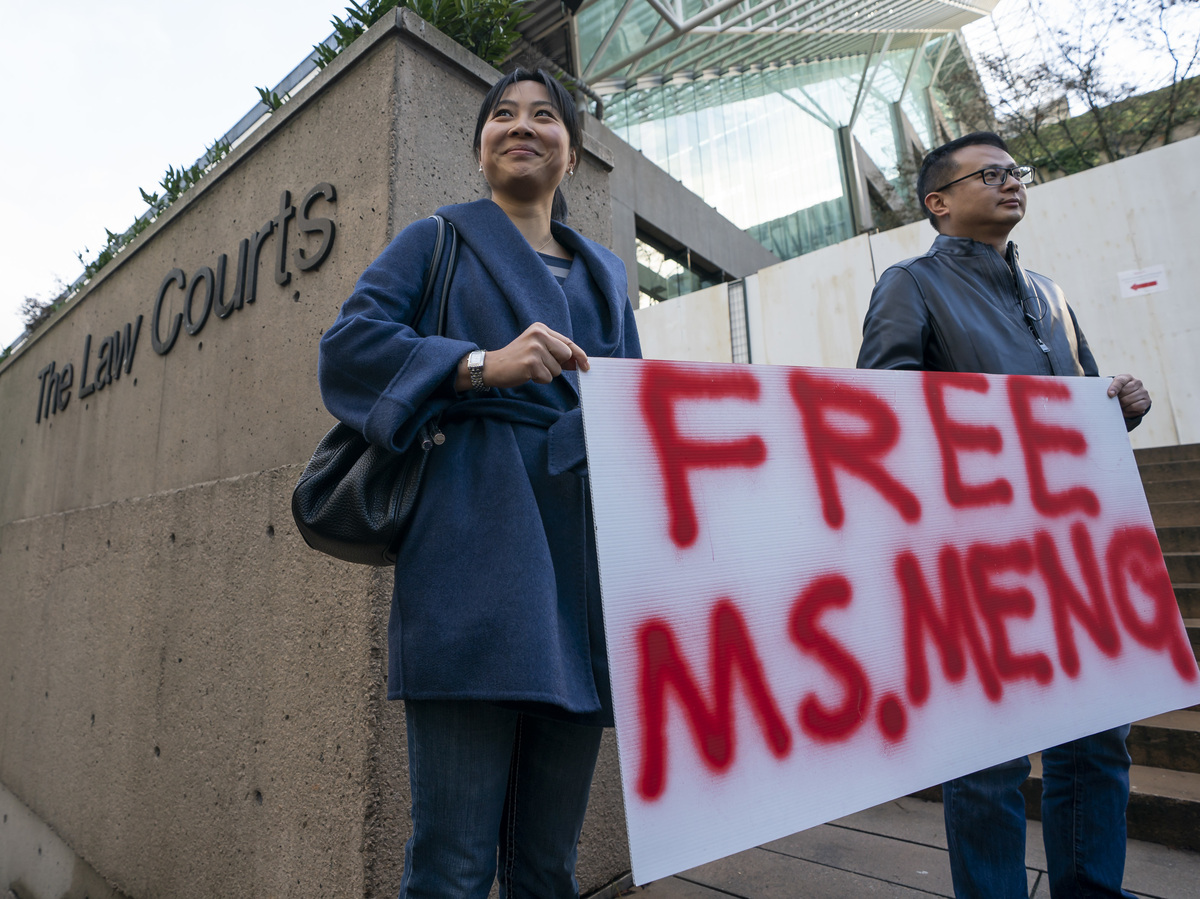 Supporters Ada Yu and Wade Meng (no relation) stand outside the British Columbia Supreme Court on Monday before the bail hearing for Huawei Technologies CFO Meng Wanzhou in Vancouver.

A Canadian judge ruled Tuesday a Chinese tech executive, detained at the request of the U.S., can be free on bail while awaiting an extradition hearing.

The judge said Meng Wanzhou must meet stringent conditions aimed at making sure she doesn't flee Canada for China.

The Vancouver judge, William Ehrcke, said Meng must post bail of $10 million Canadian ($7.5 million U.S.), according to Reuters. A portion of the money must be paid by other people, who presumably don't have the vast resources of Meng's family and would take a greater hit if she absconded.

Other conditions include handing over her multiple passports to the court, wearing an electronic monitor and not leaving home overnight.

Ehrcke said he believed under those conditions, the risk that she wouldn't appear when required could "be reduced to an acceptable level." He set her next court appearance for Feb. 6.

The International Crisis Group said Tuesday it was aware of the reports that its North East Asia senior adviser Michael Kovrig had been detained. "We are doing everything possible to secure additional information on Michael's whereabouts as well as his prompt and safe release," the Brussels-based organization said in a statement. Kovrig was formerly a diplomat to Beijing and Hong Kong, as well as the United Nations.

Canada Public Safety Minister Ralph Goodale said he was "deeply concerned" about a Canadian citizen detained in China, but did not identify the person, Reuters reports.

While China has not discussed Kovrig's detention, Bob Rae, former premier of Ontario tweeted that he finds the reason obvious: "Of course it's clear. It's called repression and retaliation."

This wouldn't be the first time that China has held a Canadian as part of larger geopolitical events. In 2014, a Canadian couple was arrested and detained seemingly as retribution for the U.S. seeking the deportation from Canada of a Chinese national accused of stealing U.S. military secrets. The husband, Kevin Garratt, was imprisoned for two years.

In Meng's case, the U.S. seeks her extradition to stand trial on fraud charges. Meng, the chief financial officer at telecom juggernaut Huawei, owns two multimillion-dollar homes in Vancouver. Her lawyers offered those properties and a cash payment as bail, amounting to about $15 million, The New York Times reports.

She also offered to pay for the costs of her own security, and suggested her Chinese husband and the head of a security firm could be her sureties to guarantee her presence in court, an idea that the judge questioned.

"Is it appropriate to name as a surety someone who is not ordinarily resident in Canada, even though they might have the status which would permit them to reside in Canada?" said Justice William Ehrcke, according to the Vancouver Sun. "The purpose of naming a surety is that they act as the jailer for the person during the period of release. So that's an important responsibility."

In a letter, the U.S. Justice Department argued strongly against Meng's release, warning that she would likely flee back to China, which has no extradition treaty with the U.S. The Justice Department also pointed to Meng's access to enormous wealth: She is the daughter of Huawei's founder, Ren Zhengfei, whom the U.S. says has a net worth of $3.2 billion and is the 83rd richest person in the world.

The Justice Department says that around April 2017, Huawei (and Meng) became aware of a U.S. criminal investigation into the company, and so its executives began avoiding traveling to or through the U.S. Meng traveled to the U.S. "on numerous occasions" from 2014 to 2016, but made no further trips to the U.S. after March 2017.

Meng has used seven different passports — four from China, three from Hong Kong — in the past eleven years, U.S. authorities say, adding that she may have more they don't know about. "Even if Canadian authorities seized Meng's travel document that she used to arrive in Canada, she could use any number of additional travel documents to flee from Canada," they write.

Her husband, Liu Xiaozong, denies in his affidavits that Meng has extra passports, and says she needed the new ones, the Sun reports:

"His wife, he says, travelled so frequently between 2007 and 2016 and required so many visas that 'the pages in these passports for such visas were utilized, requiring the acquisition of the replacement passports.'

Other passports were 'broken,' invalidated and replaced to reflect changes in her name after their marriage."

As NPR's Shannon Van Sant has reported, the U.S. alleges that Huawei used a Hong Kong-based subsidiary called Skycom as a shell company to circumvent U.S. sanctions on Iran:

"Meng's arrest has become a flashpoint in relations between the U.S. and China, and came on the same day President Trump and China's President Xi Jinping agreed to a 90-day truce in a trade war between the two countries.

"Huawei is China's largest telecom equipment maker. Its sales recently surpassed Apple, making Huawei the world's top supplier of mobile phones. U.S. intelligence agencies have warned Americans not to buy Huawei phones because of concerns over espionage, and pressured allies to not use Huawei technology."

The Sun reports Meng is being held at the Alouette Correctional Centre for Women, about 20 miles east of Vancouver.