Accessibility links
Customs And Border Protection Paid A Firm $13.6 Million To Hire Recruits. It Hired 2 A report by the Office of the Inspector General revealed Accenture, contracted to help hire 7,500 new agents, is "nowhere near" completing its goals and "risks wasting millions of taxpayer dollars." 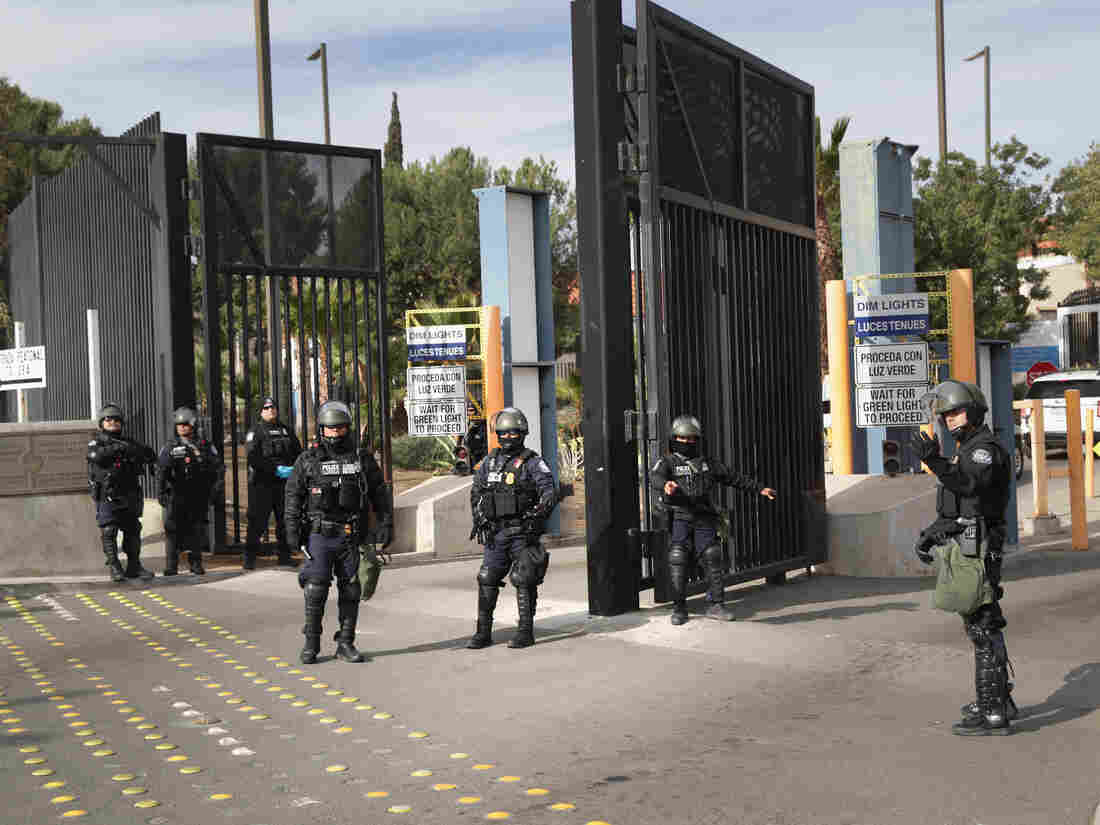 Jobs with CBP have been notoriously difficult to fill, in large part because of the polygraph exam applicants are required to undergo. John Moore/Getty Images hide caption 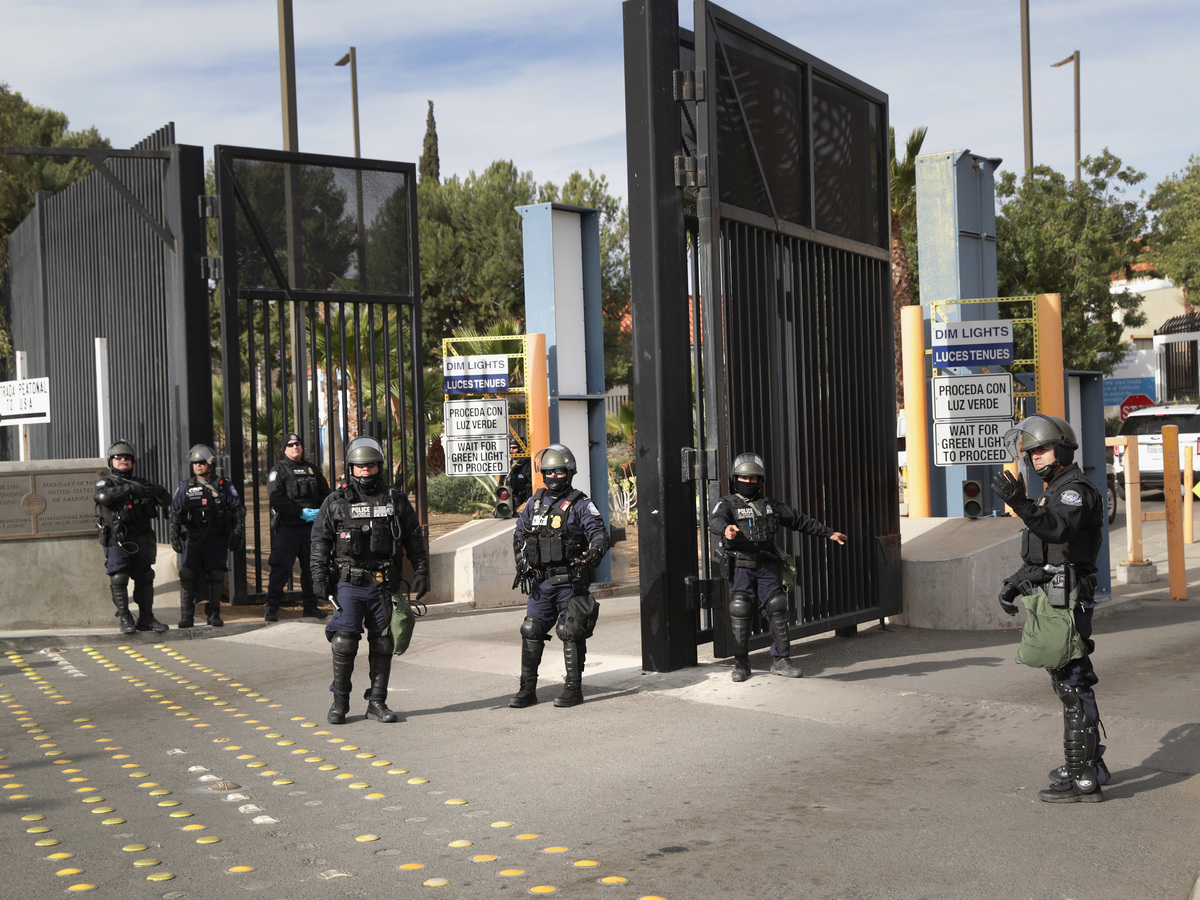 Jobs with CBP have been notoriously difficult to fill, in large part because of the polygraph exam applicants are required to undergo.

A scathing report by the Office of the Inspector General revealed that a consulting company hired by U.S. Customs and Border Protection to fill thousands of new jobs to satisfy President Trump's mandate to secure the southern border is "nowhere near" completing its hiring goals and "risks wasting millions of taxpayer dollars."

The audit found that as of Oct. 1, CBP had paid Accenture Federal Services approximately $13.6 million of a $297 million contract to recruit and hire 7,500 applicants, including Customs and Border Protection officers, Border Patrol agents, and Air and Marine Interdiction agents. But 10 months into the first year of a five-year contract, Accenture had processed only "two accepted job offers," according to the report.

The inspector general called for immediate action. The report is titled "Management Alert — CBP Needs to Address Serious Performance Issues on the Accenture Hiring Contract." It alleges the consulting company — which CBP agreed to pay nearly $40,000 per hire — failed to develop an "efficient, innovative, and expertly run hiring process," as the company pledged to do when it was awarded the lucrative contract. Instead, the probe concluded the company "relied heavily" on CBP's existing infrastructure, resources and experts in all of its recruiting.

"We are concerned that CBP may have paid Accenture for services and tools not provided," the report states. "Without addressing the issues we have identified, CBP risks wasting millions of taxpayer dollars on a hastily approved contract that is not meeting its proposed performance expectations."

According to the report, CBP has bent over backward to accommodate Accenture.

When it became clear the company would miss a 90-day deadline to reach the "full operation phase" outlined in the agreement, the agency modified the contract granting Accenture another three months to ramp up operations to meet the terms of the contract.

CBP also allowed the company to use the government agency's applicant tracking system when Accenture failed to deploy its own, leading to another contract revision.

The result of both changes meant that as recently as July 1, CBP staff continued to carry out a "significant portion of the hiring operations," the OIG noted. And because there was no way to track which applicants were recruited through Accenture's efforts, CBP agreed to "give credit and temporarily pay Accenture for a percentage of all applicants."

The OIG's conclusion: "CBP must hold the contractor accountable, mitigate risk, and devise a strategy to ensure results without additional costs to the Government."

The Department of Homeland Security's internal watchdog launched the investigation after receiving complaints about Accenture's performance and management on an OIG hotline.

A spokeswoman for Accenture Federal Service — a subsidiary of Accenture, a global security consulting firm based in Ireland — didn't answer questions from NPR, but instead emailed a statement that said the company remains "focused on fulfilling our client's expectations under our contract."

Meanwhile, Henry Moak, a senior CBP official, disputed the OIG's findings in a letter dated Nov. 28. Moak argued that Accenture has successfully "created a hiring structure, tailored technology solutions to support and manage the hiring process" and has "recruited thousands of new applicants." Further, Moak claimed that the suggestion that the changes in the contract were due to a failure on Accenture's part is "inaccurate." He said the changes were requested by CBP "because it offered better overall efficiency in our mutual hiring activities." Additionally, for any cutbacks in Accenture's responsibilities, the agency "made equitable adjustments to decrease the cost-per-hire."

Accenture was awarded the contract in November 2017 as a way to help CBP meet the Trump administration's Border Patrol staffing demands — a week after taking office Trump signed an executive order calling for an additional 5,000 Border Patrol and 10,000 Immigration and Customs Enforcement agents.

Border Patrol jobs with the CBP have been notoriously difficult to fill, in large part because of the polygraph exam applicants are required to undergo. The AP reported that 2 out of 3 applicants fail the exam.

"The US Border Patrol, the CBP's law enforcement arm at the US borders, has a statutorily established minimum staffing level of just over 21,370 agents, not including the additional request from the president.

Ultimately, CBP did agree to recommendations in the OIG report, including assessing Accenture's performance and whether the payment system established in the contract is the most cost-effective way to hire new employees.

"While we take some exception to the OIG's characterization of the contract, we do agree the contract has been a challenge, primarily due to the innovative efforts by both parties and we are reviewing how best to use it moving forward," a CBP spokesperson told NPR in an emailed statement.