Accessibility links
'Rethinking The Past' In The Aftermath Of California's Deadly Wildfires Last month's deadly Camp Fire has become a turning point in the debate over how western forests should be managed. 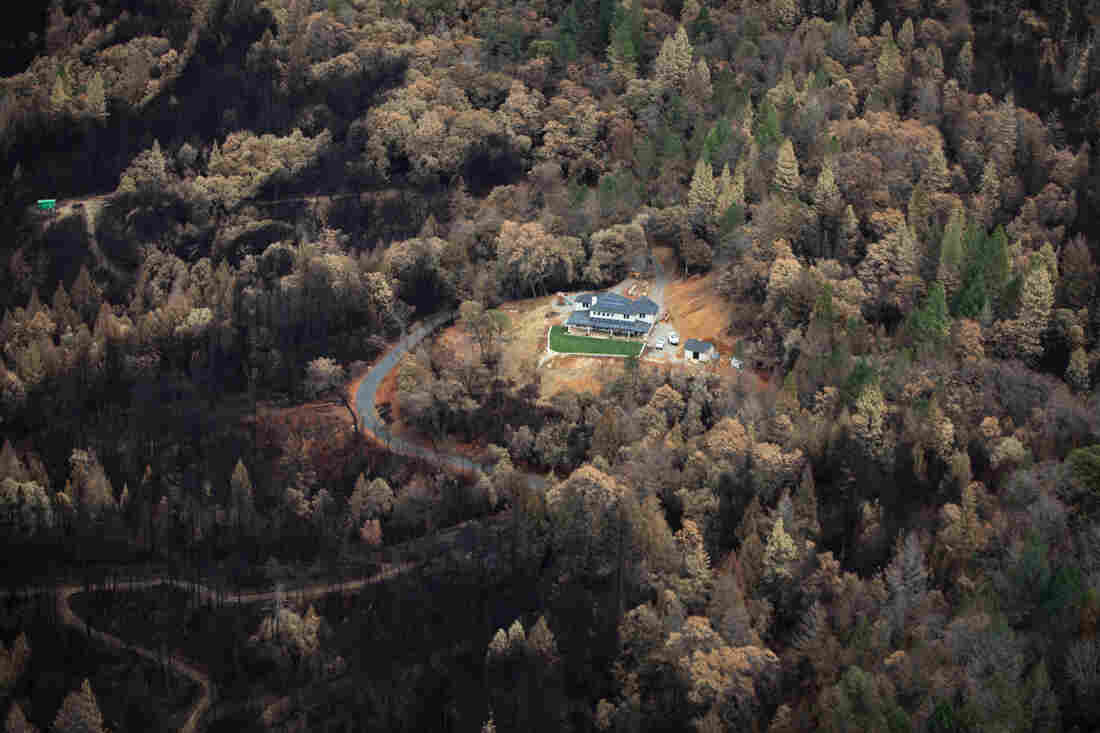 Just outside of Paradise, the charred remains of the Camp Fire stops just short of a home that survived the blaze. Adam Grossberg/KQED hide caption 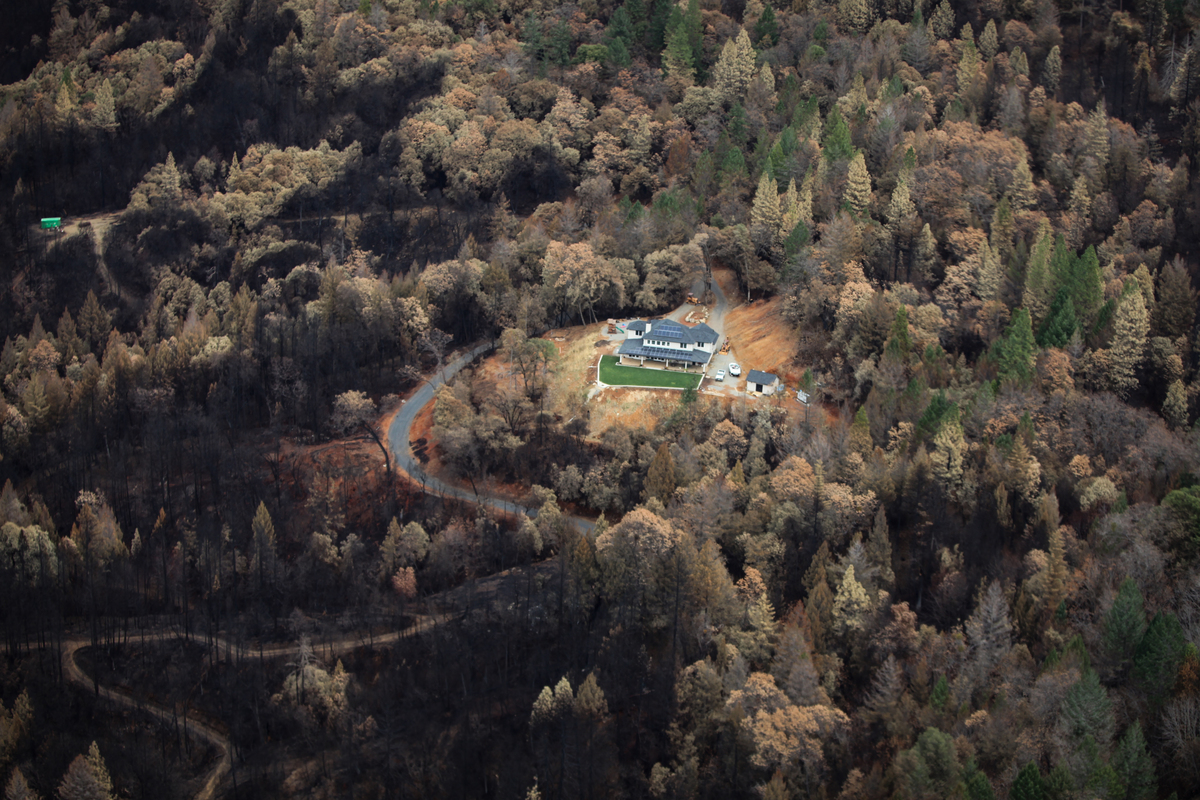 Just outside of Paradise, the charred remains of the Camp Fire stops just short of a home that survived the blaze.

From the air, the scale of the devastation in and around Paradise, Calif., is, simply put, alarming.

Whole neighborhoods and commercial districts are completely decimated, turned to rubble amidst the tall, orange-singed pine trees with blackened trunks. Deeper into the mountains, illegal pot plantations were suddenly exposed — and charred. Then there's the odd home on a ridge top or Rite Aid store that's been randomly spared.

"See how hot that burned, there's nothing left down there," says Dan Tomascheski, talking through a headset over the roar of the helicopter.

He's vice president of resources for Sierra Pacific Industries, one of northern California's biggest timber companies. 10,000 acres of the company's private land was scorched by the Camp Fire, the largest and deadliest wildfire in California history.

"We'll have to get [down] there quickly and harvest what's big enough to make lumber," Tomascheski says.

In the immediate term, his company will try to salvage as many of the burned trees that they can before they're taken over by bugs or rot. The longer term strategy is more complicated and, in the past, has been politically fraught. But now, many on the ground in beleaguered Butte County — from the timber industry to environmentalists, forest ecologists and firefighters — see this fire as a possible turning point in the long running debate over how western forests should be managed.

"Every one of the fires, Thomas, Tubbs, Carr and of course Camp, have all been leading us down the same direction — we have to rethink the past," said Jim Broshears, emergency operations coordinator for the town of Paradise.

Even as Paradise and the communities around it are still reeling in crisis, foresters are already eyeing the critical forest health and restoration work ahead.

"There's an agreement now that we have overstocked forests that are not resilient to drought, disease and wildfire," Broshears says.

In many northern California forests, the forests are so overgrown there are ten times as many trees as there would be in a healthy, natural forest. All of that overgrowth, dried out from hotter and longer summers and a history of suppressing wildfires, is a big reason why we're now seeing deadly infernos like the Camp Fire.

Trees as a 'liability'

In the mountains near the old sawmill town of Stirling City, Dan Tomascheski has traded a chopper for a pickup so he can get a closer look at the extent of some of the damage to Sierra Pacific's timber lands. In one forested rural neighborhood that didn't burn, it is astounding how dense the woods are, thick with brush and small diameter trees. It is similar to how many forested areas near Paradise looked before last month. 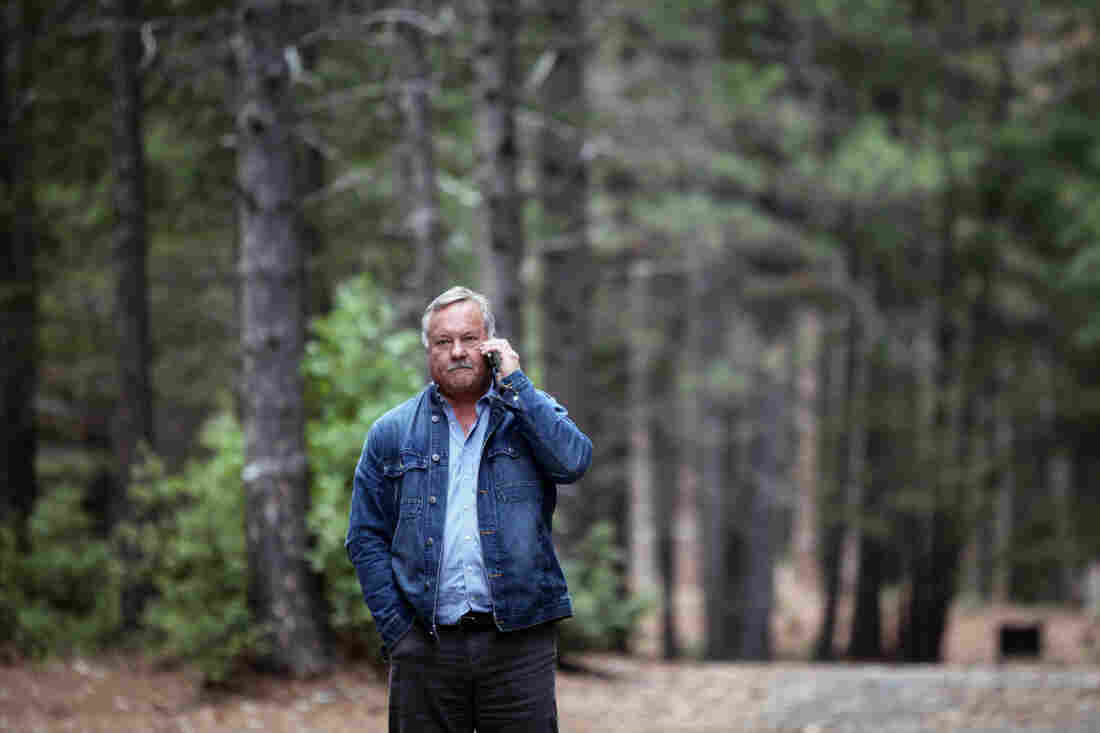 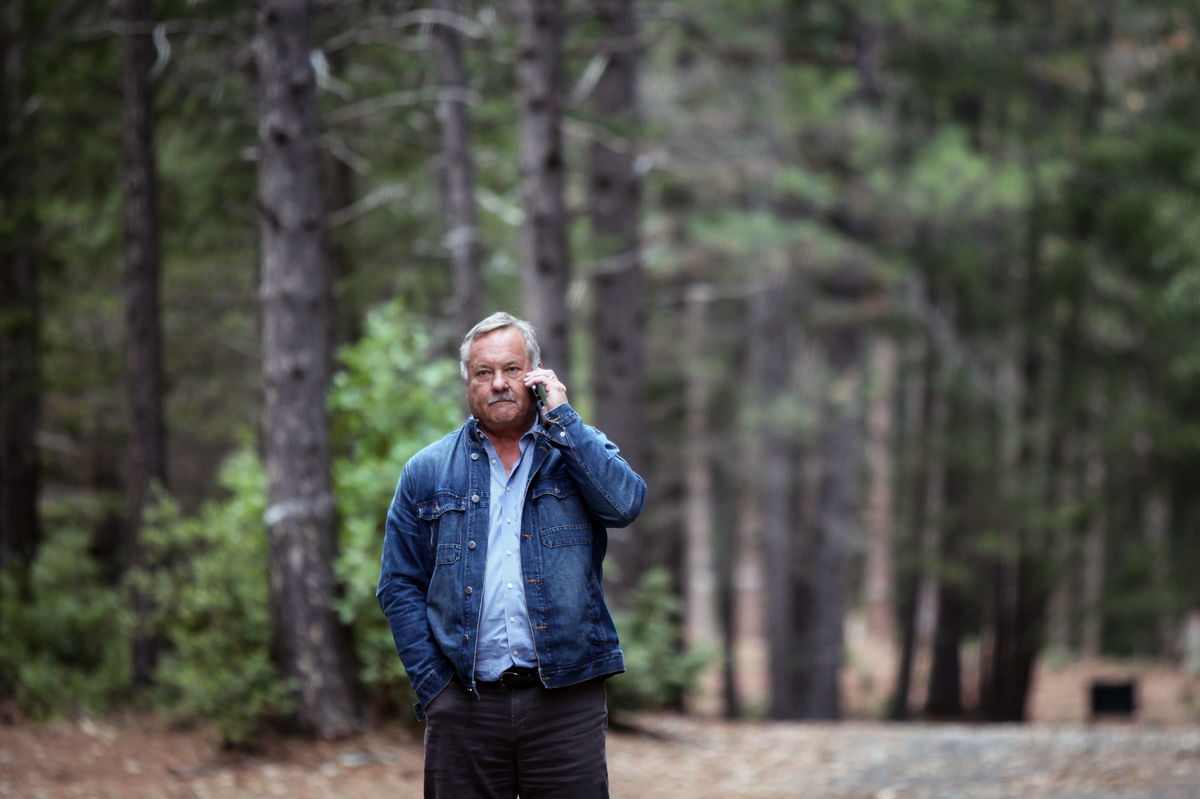 "People love the trees and they're beautiful," Tomascheski says. "But they can be a liability."

Tomascheski stops near Paradise Lake to point out a small clearing in the forest where the large trees mostly survived the fire. Earlier this year, Sierra Pacific had thinned out underbrush and some of the trees to create what's known as a fuel break. This had the effect of slowing down the Camp Fire long enough to allow firefighters to safely stage here and make a stand against the fire.

"We don't think we're being naive in that this is a panacea for every condition every time but this really is a start," Tomascheski says. You're never going to stop these modern megafires once they blow up, he says, but a key fuel break like this might give firefighters the upper hand on the second or third day. 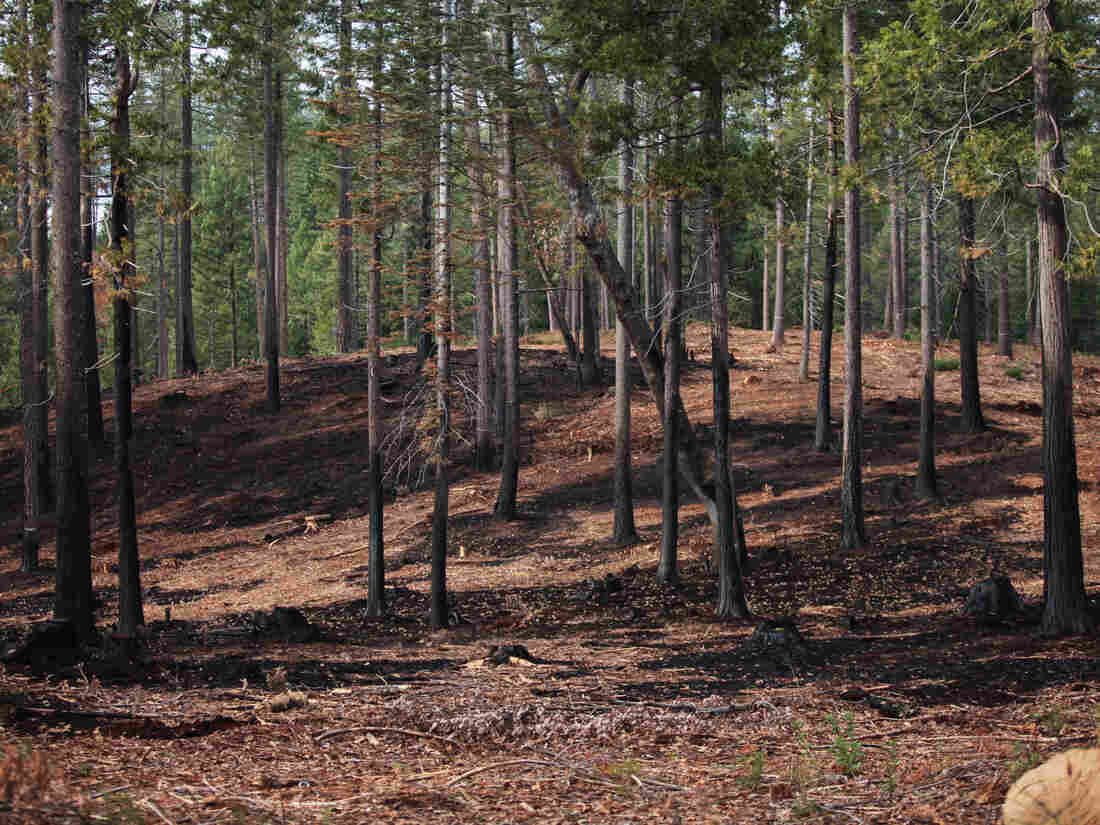 Part of Sierra Pacific's defensible space project outside of the town of Stirling City. This thinned area was used as a Cal Fire staging area and was one of the northern boundaries of the Camp Fire. Adam Grossberg/KQED hide caption 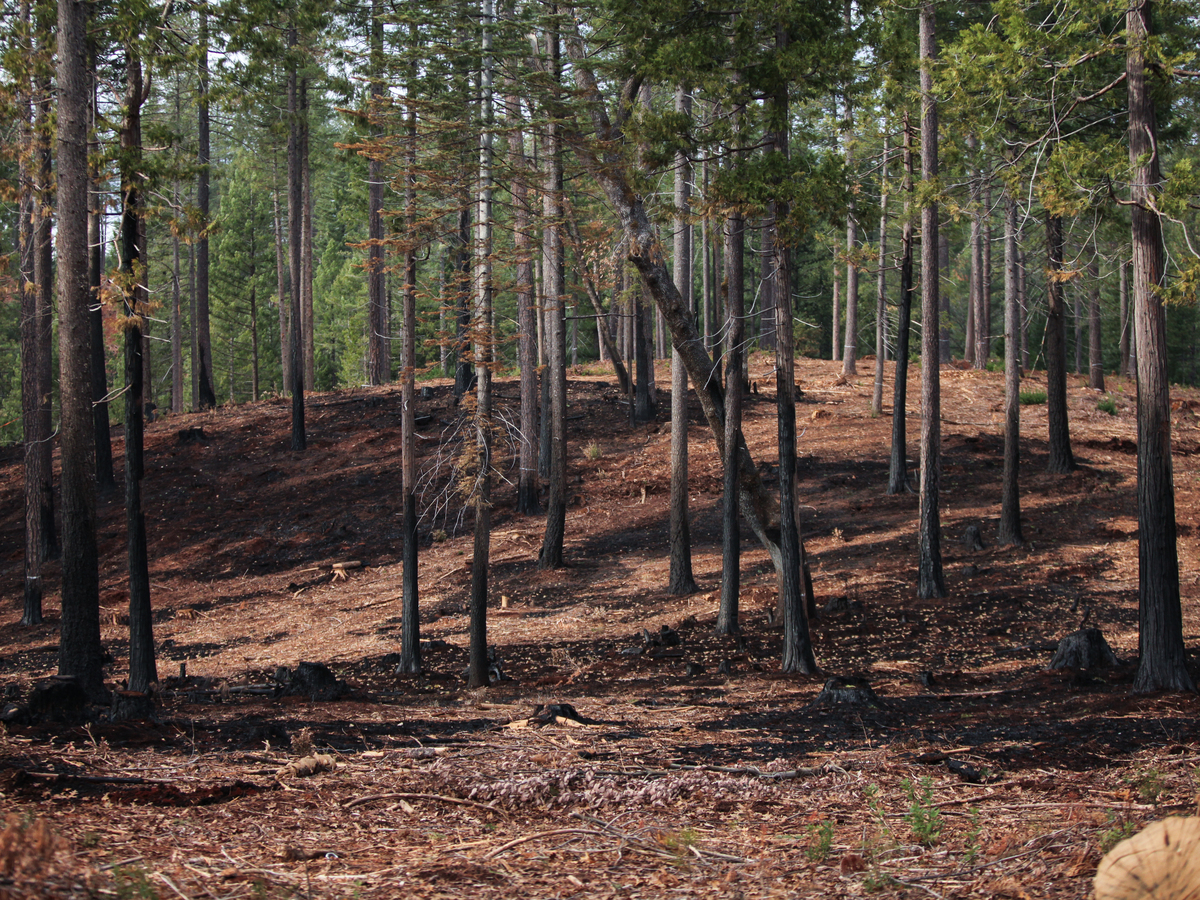 Part of Sierra Pacific's defensible space project outside of the town of Stirling City. This thinned area was used as a Cal Fire staging area and was one of the northern boundaries of the Camp Fire.

There isn't a lot of good news after the Camp Fire. But the small success around this fuel break makes the case for the kind of work that foresters say needs to be done now across millions of acres of private and public lands across the West.

An estimated ninety percent of all of the homes in Paradise, population 29,000, were destroyed. Jim Broshears' place was spared, which he credits to the extensive brush clearing and other mitigation work he'd done prior to the fire. But he says this work creating 'defensible space' and fuel breaks can't just be focused in and around towns that have been built out into fire prone areas. Attention also needs to be paid way out into the forests, doing selective thinning projects, brush clearing and controlled burns.

"I hope that one of the outcomes of this is that we'll all be at the same table," Broshears says.

The so-called timber wars of the 1980s and 90s pitted environmentalists against the logging industry. Battles over the spotted owl and other issues led to a significant drop in timber harvests on federal public land. But Broshears and others who work on the land say, these days, what's really holding up these critical forest management projects is funding, not those environmental battles or lawsuits.

Arielle Halpern, a wildfire scientist with the Mount Shasta Bioregional Ecology Center, says there's a realization now that all the finger pointing and the blaming of the past wasn't constructive.

"I think there are a lot of discussions that need to happen and everybody could use some education," she says. "I say this for myself as well."

North of Paradise near the town of Mt. Shasta, Halpern is organizing her neighbors — from hippies to ranchers — into community groups that will conduct prescribed burns on private land.

"We do have common goals; we all like to have safe homes and families," Halpern says. "You talk to an environmentalist on the far left and someone on the far right and I bet that they could agree with that statement."

Back in the woods, near the old sawmill town of Stirling City, Dan Tomascheski says his industry is now talking and compromising with groups they might not have even agreed to meet with a couple decades ago.

"It takes time, you go to more meetings than you'd like to, but you need to build a consensus," he says.

There's too much at stake not to build that consensus, foresters say. There's valuable timber, of course. But the forests are also important wildlife habitat. They serve as critical watersheds for many western cities and the recent megafires are emitting enormous amounts of carbon into the atmosphere, worsening global warming.

"It's in nobody's interest to burn the whole resource up," Tomascheski says.

In recent years Sierra Pacific and other companies have begun making retrofits to mills in order to process the smaller diameter wood and biomass that needs to be cleared out from the forests, and turn it into a commercially viable product.

If the industry knows there will be a steady market, Tomascheski says, they'll invest and expand. He sees an upside amid all this tragedy — the potential for a rural economic boom.