Accessibility links
Latest Entries to the National Film Registry Admit More Diverse Styles, Stories Not a "best" list, the Library of Congress' registry is intended to keep a record of American culture as represented through film; this year's selections admit more diverse styles and stories.

'Jurassic Park,' 'The Shining,' And 23 Other Movies Added To National Film Registry

'Jurassic Park,' 'The Shining,' And 23 Other Movies Added To National Film Registry 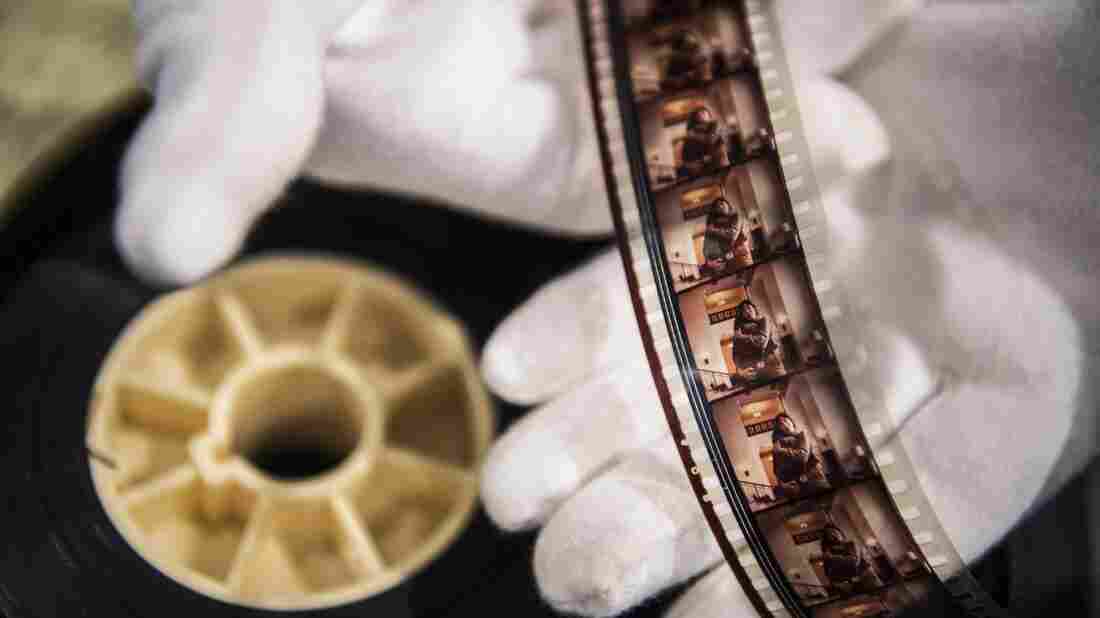 A man displays a rare cut from the film The Shining. The movie was recently added to the National Film Registry, as announced Wednesday. Marco Bertorello/AFP/Getty Images hide caption 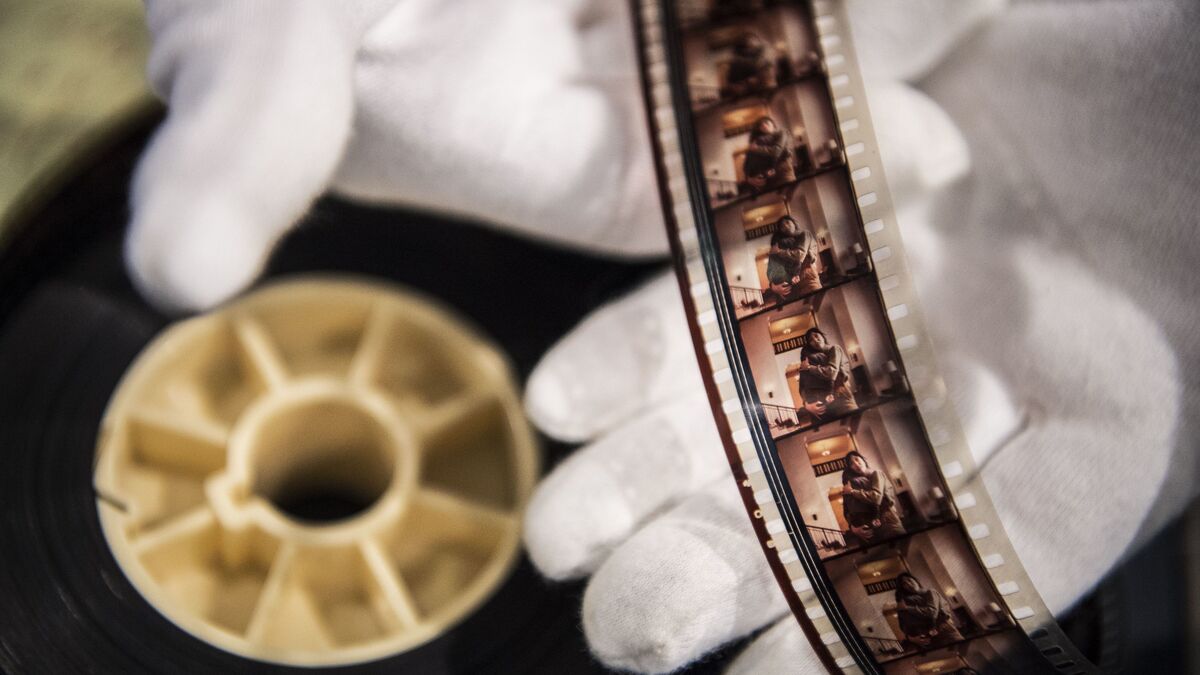 A man displays a rare cut from the film The Shining. The movie was recently added to the National Film Registry, as announced Wednesday.

Each year the Library of Congress adds 25 films to the National Film Registry, a list of motion pictures that it deems "culturally, historically or aesthetically significant" and thus recommended for preservation. The 2018 additions were announced Wednesday morning.

These movies, and the 21 other 2018 inductees, join the 725 already on the registry. But before the inevitable arguments erupt, it is important to note that the Library of Congress does not intend the collection to be read as a list of the best films in cinematic history. The movies chosen are instead meant to reflect American culture as compositions of consequence.

"These cinematic treasures must be protected because they document our history, culture, hopes and dreams," Librarian of Congress Carla Hayden said.

While it is she who makes the ultimate selections of what gets added to the registry, the public is encouraged to make nominations and can do so online. The films can be of any length, genre or style; the only requirement is that they be at least 10 years old.

The contribution of the public very likely helps the list achieve its mission of reflecting "who we are as a people and as a nation."

Last year's selections seemed to follow an arc of nostalgia tailored to Generation X, which grew up with The Goonies (1985), enjoyed Die Hard (1988) in the audaciousness of early adulthood, and was ready for some nontraditional storytelling and reflection with 2000's Memento.

This year's selections seem to reflect a generation featuring an evolving and more diverse cast of characters.

A cinematic story with a motif of oral storytelling, the 2018 inductee Smoke Signals (1998) is thought to be the first movie written, directed, co-produced and acted by Native Americans.

The portrayal of Native American life in the film is far from static and does not exist in a space separate from the broader pop culture narratives of Americana. This is perhaps best represented by the iconic song, improvised from the back of a bus, by the film's protagonists about John Wayne's mysterious teeth.

The lighthearted take on more modern Native American life is contrasted by "a masterpiece of modern horror" — a film with a subliminal message written to an audience looking in the mirror at the atrocities of its colonialist past.

The horror movie's terrifying representation of the ghosts of Western racism and imperialism has been widely commented on.

It is set in a hotel supposedly located on "an Indian burial ground," ends with an eerie photo of Jack Torrance (Jack Nicholson) dated July 4, and includes only one actual murder, which is of the hotel's head cook — the only African-American character.

Four years after the premiere of The Shining, filmmaker Ayoka Chenzira made Hair Piece: A Film for Nappy-Headed People in 1984.

She was inspired after observing African-American people in "banks, in grocery stores, in the supermarket" with shower caps on.

"The Jheri curl was a very popular hairstyle in the '80s. It was this perm, this relaxer, that was said to take hair that was woolly, wild, kinky and beautifully nappy and change the texture of it so that it would be more manageable," she said. "You were supposed to sleep in this shower cap in order for the full activation process to happen."

'Airplane!' And 'Saturday Night Fever' Among Those Added To Film Registry

The visuals in the animated short are created with mixed media, using a combination of collage and hand-drawn images to illustrate the story.

"I intentionally made the film as animation because I wasn't interested in finger pointing. I wasn't interested in telling people you should wear your hair like this or you should not wear your hair like this," Chenzira said. "But I thought it was a wonderful opportunity to talk about the differences between the ritual of adornment because you already think something is very beautiful versus fixing something because someone else has told you that it's not beautiful."

Speaking of something beautiful, Something Good – Negro Kiss is the oldest film of this year's inductees. "Shot in 1898, it is the earliest known footage of black intimacy on screen," according to the Library of Congress.

The film is 29 seconds and was discovered and publicized by the University of Southern California's Dino Everett and University of Chicago's Allyson Nadia Field.

"What makes this film so remarkable is the noncaricatured representation and naturalistic performance of the couple," Field said, adding the actors' playful and repeated kissing constitutes "a significant counter to the racist portrayal of African-Americans otherwise seen in the cinema of its time. This film stands as a moving and powerful image of genuine affection and is a landmark of early film history."

Jumping from the 19th century to the 21st but remaining with noncaricatured representations, Brokeback Mountain, selected this year, is the most modern of the entire registry.

The winner of three Academy Awards in 2006, including best directing and best adapted screenplay, the film depicts a tragic gay love affair between two ranch hands. Roger Ebert said it had been described as "a gay cowboy movie," which the late critic then criticized as "a cruel simplification."

NPR's Bob Mondello said at the time that while the cowboys, portrayed by Jake Gyllenhaal and Heath Ledger, are unique in their sexual identities, their development fits the genre.

"Rugged individuals stoically facing longing, and loss," the film critic said. "It also describes a lot of Westerns, if you make allowances for the kind of longing."

Mondello agreed with Ebert that the film is much more than a gay cowboy flick, and he added that it even advances the Western genre beyond its mainstays of brave protagonists and arresting landscapes.

On Wednesday at 8 p.m., Turner Classic Movies will air selection of films named to the registry this year. Select titles from the entire National Film Registry are available online.

A previous version of this story incorrectly spelled the name of the movie Memento as Momento.