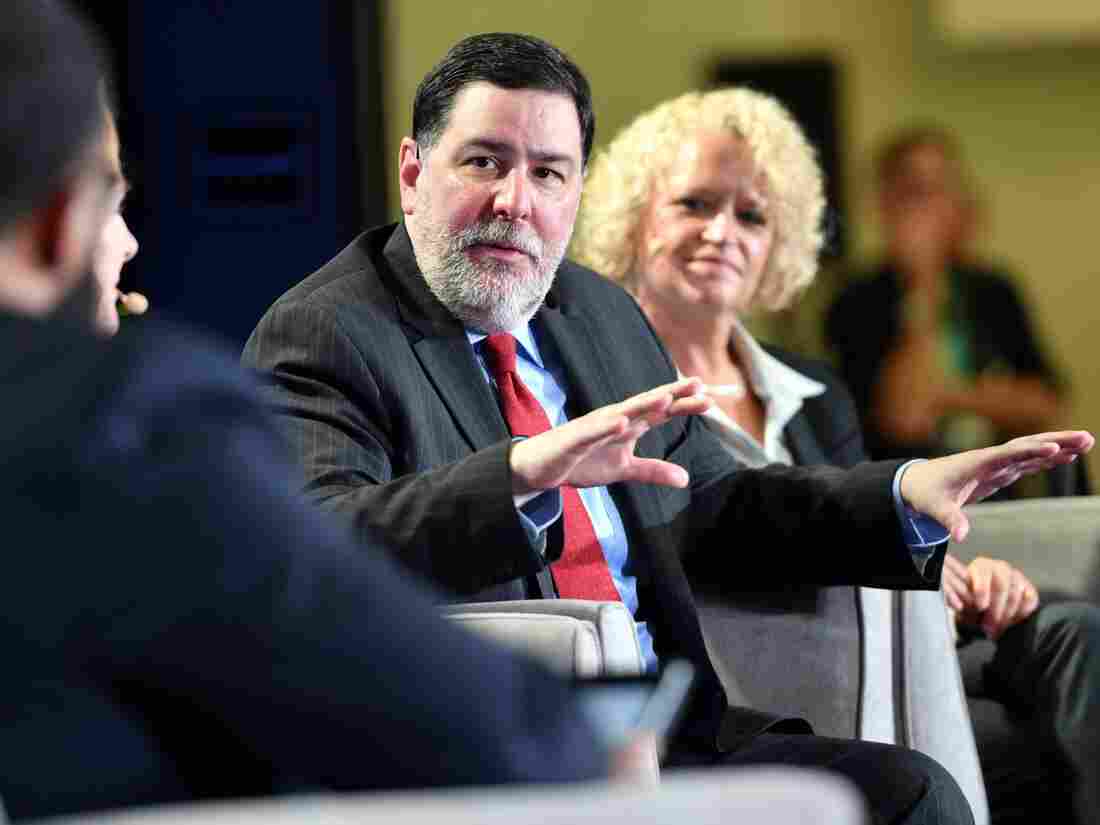 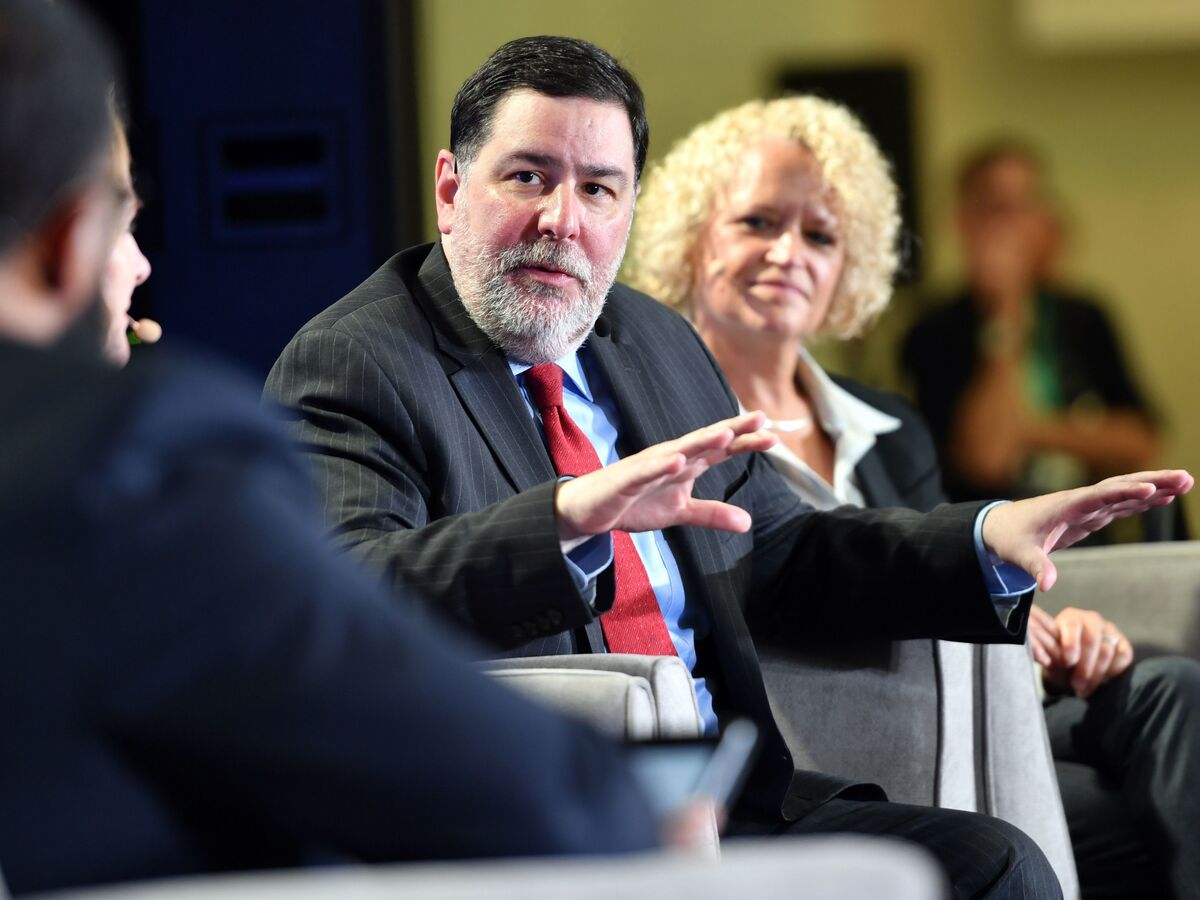 Leaders from nearly 200 countries, including the United States, are at a big climate conference in Poland this week. They are struggling to agree on rules for how to meet their national promises to reduce greenhouse gas emissions under the Paris climate agreement of 2015. The official U.S. position is making it difficult.

The Trump administration is touting the importance of fossil fuels, refusing to acknowledge basic climate science that humans are causing the globe to warm, and generally reminding everyone at the meeting that the U.S. intends to back out of the Paris Agreement.

But another group of U.S. leaders is also represented at the meeting: governors, mayors and other local authorities who say they are committed to reducing greenhouse gases even if the federal government is not.

"I think it's important to show what civil society thinks," says Carla Frisch, a climate analyst at the Rocky Mountain Institute think tank who works with the coalition of local officials. She and others from the coalition have met formally this week with the governments of France, Germany and a group of island nations that are already feeling catastrophic effects of climate change.

"I think it reminds them that the U.S. is serious about reducing emissions," Frisch says. "We do have, maybe, a peer pressure role on the international scene." And, she says, it's a reminder to other governments that their own citizens and local officials might want them to commit to strong international climate policies.

The coalition was initially created after President Trump's 2017 announcement that the United States will withdraw from the Paris Agreement. A handful of local authorities are in Poland representing their own states and cities for the meeting, including officials from California, Washington state and Pittsburgh, Pa.

"Most people would expect the mayor of Berkeley or Boulder or Burlington to be here," says Pittsburgh Mayor Bill Peduto, "but I think there's a different message that comes out when the mayor of Pittsburgh is here. It sort of says 'Hey, the water's warm. If Pittsburgh can do it, we all can do it!' "

This is Peduto's third time attending an international climate meeting. He says Pittsburgh's history as a city built on coal and steel but now moving away from industry makes him a good representative to the meeting.

Under Peduto, Pittsburgh has pledged to transition its city government's energy use to entirely renewable sources by 2030, and decrease its overall energy use by half. The first report on the city's progress will come in 2020. Pittsburgh has made some progress decreasing air pollution from industrial sources and vehicle emissions.

"There are more than federal governments at stake now, and the subnational level is really where it's going to get implemented anyway," he says. "It's really nice when nations sign documents, but what it really comes down to is what we do in our own neighborhoods and what we do in our own cities."

"Most of the more important decisions that are taken in the country are no longer taken at the government level," he told assembled national representatives, but "are taken at regional and local level."

"Mayors, governors, heads of regional governments — it's at that level that I see more and more the key decisions being made that change the lives of people and address the challenge of climate change," Guterres continued.

Although their leaders chose not to fly to Poland to attend this year's international summit, the leaders of other American cities are also increasingly involved in climate policy. The city of Los Angeles, whose Mayor Eric Garcetti co-chairs a group called Climate Mayors, is spending more than $100 billion to expand the city's train system, and the city is publicly tracking its greenhouse gas emissions.

Houston Mayor Sylvester Turner, who co-chairs the group, announced in September that the city is working on a plan for how Houston can be net carbon neutral by 2050, says Lara Cottingham, chief sustainability officer for the city. The details of that plan will be finished by this time next year.

Despite such actions and pledges, the scientific reality is that emissions are not falling nearly enough. In fact, in 2017 greenhouse gas emissions grew for the first time in three years, and the world is not on track to avoid the most serious effects of climate change.

In an interview with NPR's All Things Considered on Tuesday, outgoing California Gov. Jerry Brown said governments big and small are not being ambitious enough about moving to an economy that does not depend on fossil fuels.

"The climate danger and damage is much greater than people are talking about, and it's going to get here much sooner," he said. "I'm sure that the political leaders will respond after we have four or five more disastrous fires, or four or five floods and hurricanes."

The delay will cost the U.S., he warned. "The problem is the cost will be much higher and the political wreckage that much greater, because the burden of spending to transition to a noncarbon world will be much higher, much harder and [more] wrenching to the democratic political system."

Jerry Brown is California's governor. A previous version of this story incorrectly called him the mayor.