Accessibility links
Quake-Up Call: Magnitude 4.4 Temblor Rattles People Out Of Bed Across Southeast U.S. The earthquake struck eastern Tennessee before dawn Wednesday. As mild as it was, its effects were felt from eastern Kentucky all the way to Atlanta. 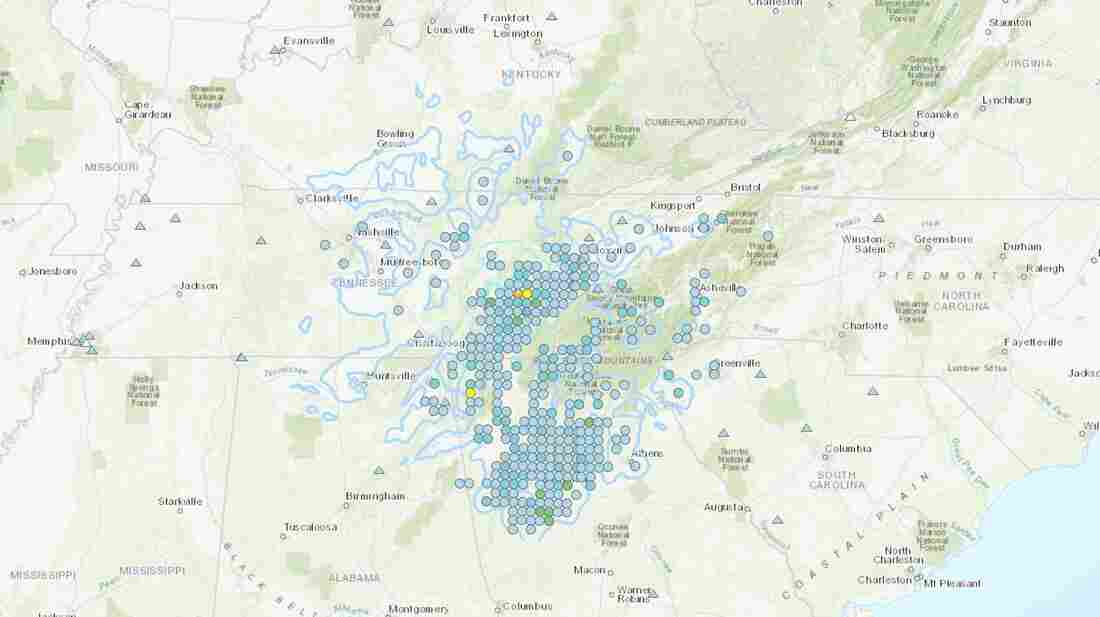 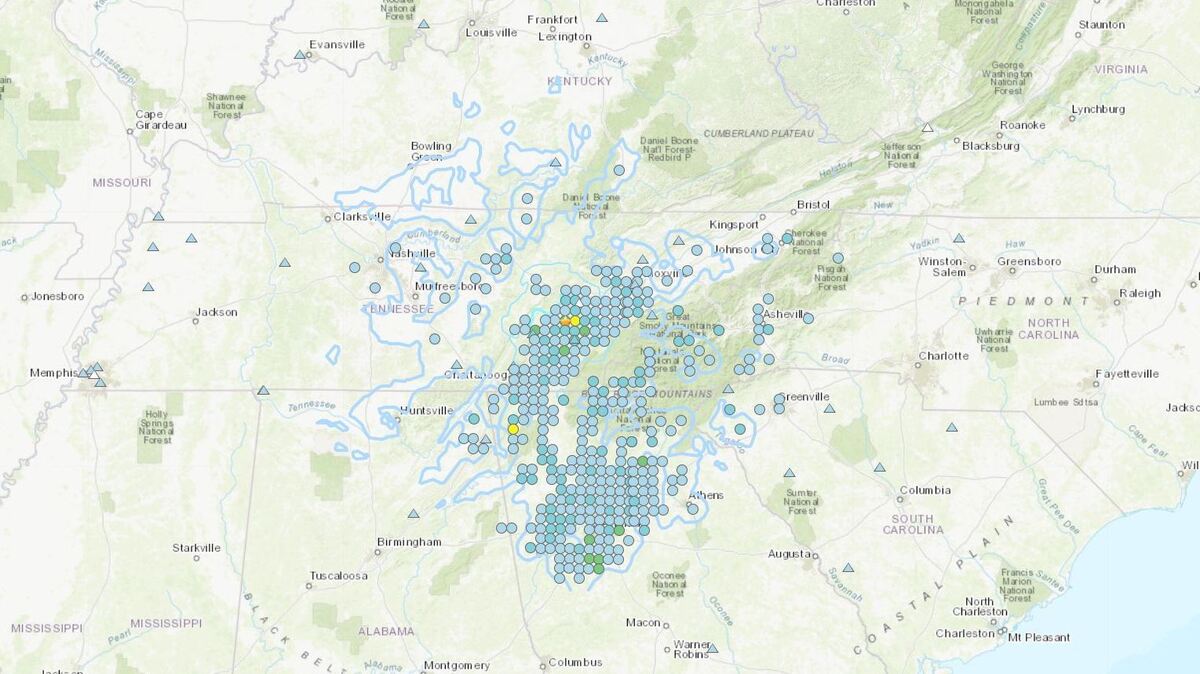 A map provided by the U.S. Geological Survey shows the region that felt Wednesday's magnitude 4.4 earthquake.

Before the sun rose Wednesday over Tennessee, some residents in the eastern half of the state got a wake-up call. But it wasn't a friend or partner shaking them awake, it was the very ground beneath their beds.

A magnitude 4.4 earthquake struck at around 4:14 a.m. ET near Decatur, Tenn., about 150 miles southeast of Nashville. But Tennessee residents weren't the only ones to feel the temblor. More than 7,700 people (so far) have reported experiencing it, from Kentucky and northern Alabama to the western Carolinas. The earthquake even made its presence felt in Atlanta.

"A lot of people were rattled awake — literally," Amy Vaughan, a geophysicist with the U.S. Geological Survey, tells NPR. She anticipates that, given the quake's mild intensity, it may have caused some structural damage or knocked objects off walls but likely did a lot more to shock residents than shatter their stuff. "I mean, this is probably not something people are used to."

With good reason: Vaughan says that since 1973, this is only the sixth earthquake greater than magnitude 4.0 to affect the seismic zone around the southern Appalachian Mountains. And it was the second-largest on record in eastern Tennessee, behind only a magnitude 4.7 quake 45 years ago.

This morning's M4.4 earthquake near Decatur is the second strongest on record in East TN, according to the USGS. The strongest was a M4.7 near Maryville in 1973. #earthquake

It is not unusual, however, for such a relatively small earthquake to be felt so intensely and so widely — at least, it's not unusual when speaking of earthquakes east of the Rocky Mountains.

"Not all magnitudes are created equal," Vaughan points out.

Seismic waves travel more efficiently through the older, denser rocks of eastern North America, and thick deposits of sediment further amplify the shaking. And fewer buildings in the East are made to withstand potential earthquakes.

"A magnitude 5.8 earthquake in 2011 in Mineral, Virginia, was felt up to 600 miles from the epicenter. Tens of millions of people in the eastern United States and southeastern Canada felt this earthquake," the USGS explains.

"For comparison, a magnitude 6.0 earthquake in 2014 in Napa, California, was felt only as far as 250 miles from the epicenter. Despite the Napa earthquake releasing about twice as much energy as the Virginia earthquake and causing much more damage near the epicenter, it wasn't felt nearly as far away."

In and around Tennessee, at least, the greater range also offered a greater opportunity for snarky comments on the Internet. We'll just leave you with a few of favorite quips shaken loose by the earthquake.

Me and my cat during the earthquake #atlanta #earthquake pic.twitter.com/BRb5EQfWOw