Accessibility links
Michael Cohen Sentencing: 3 Years In Prison After Plea Implicating Trump The onetime fixer for Trump has admitted that not only did he commit financial crimes but also that Trump directed him to arrange hush-money payments to two women. Cohen also says he lied to Congress. 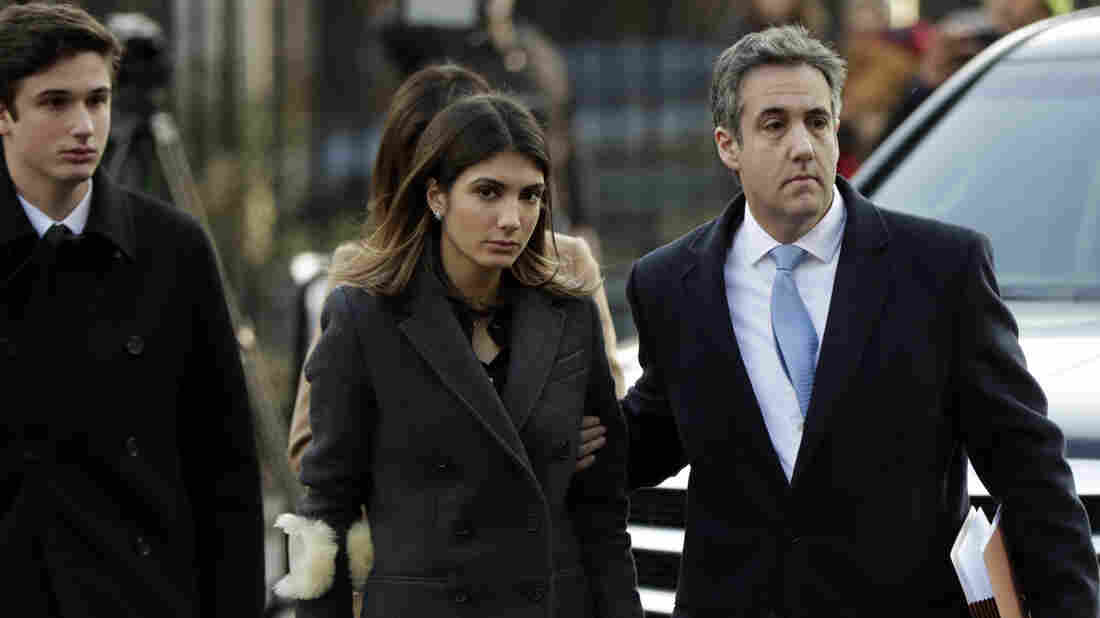 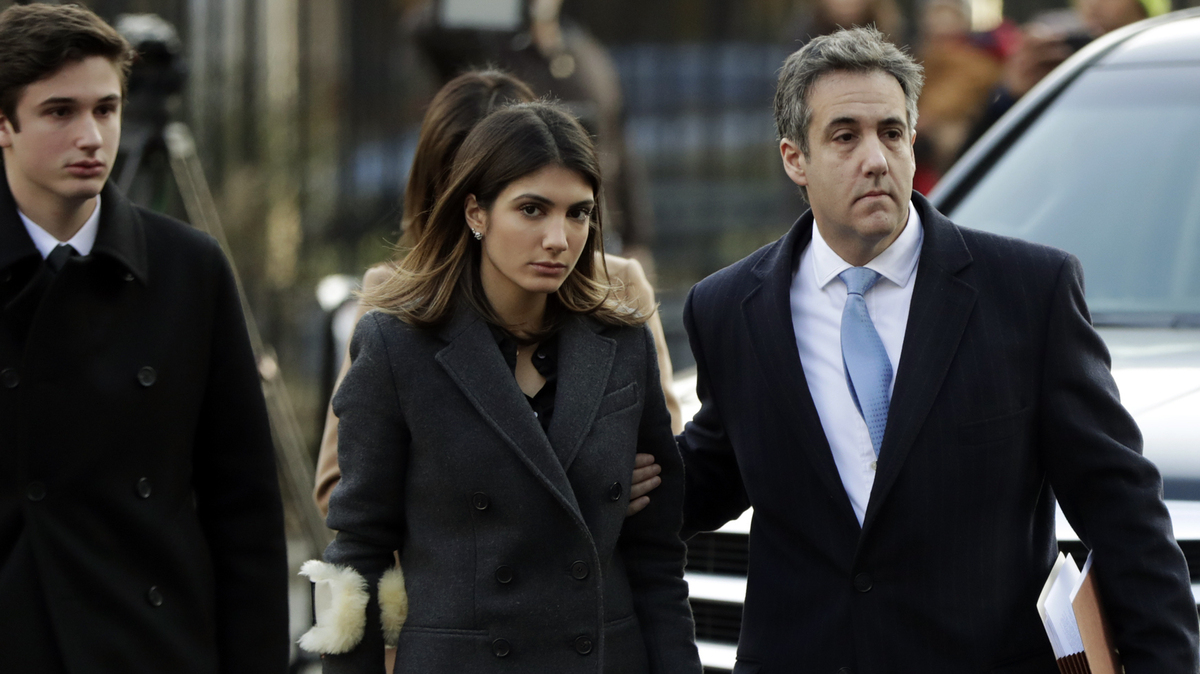 Michael Cohen, (right) Donald Trump's former lawyer, arrives at federal court, with his children Jake and Samantha, for his sentencing in New York on Wednesday.

Those three years would be followed by three years of supervised release, and Cohen also is subject to forfeiture of $500,000, restitution of $1.4 million and fines totaling $100,000.

Cohen had asked for leniency. He said in court, however, that he accepts responsibility for his actions.

"This may be hard to believe, but today is one of the most meaningful days of my life," Cohen said. "Today I get my freedom back."

He said he had been "living in personal and mental incarceration ever since I agreed to work for a business mogul." It was "blind loyalty to this man," he said, "that led me to choose a path of darkness, not light."

Cohen said the president had been right to call him "weak," but not for the reasons that Trump believes.

"I felt it was my duty to cover up his dirty deeds," Cohen said. "I was weak for not having the strength to refuse his demands. Owning this mistake will free me to be once more the person I am."

Also Wednesday, prosecutors dropped a potential bombshell in a press release about the sentencing. They said they have reached a nonprosecution agreement with tabloid publisher American Media Inc., for its role in one of the campaign finance violations at issue in Cohen's case. AMI also appears to have agreed to cooperate with investigators going forward.

Prosecutors had asked Judge William Pauley to give Cohen some consideration for the information that he has provided but argued that Cohen nonetheless still deserved a "substantial prison term."

Pauley appeared to agree, saying Cohen had admitted "a veritable smorgasbord of fraudulent conduct. Each crime involved deception, and each crime appears to have been motivated by personal greed and ambition."

The judge noted that Cohen had a comfortable childhood and loving parents.

"But somewhere along the way, Mr. Cohen appeared to lose his moral compass," Pauley said. "As a lawyer, Mr. Cohen should have known better."

Cohen's sentence marked the latest drop in a precipitous fall from the elbow of the powerful man whom Cohen served for years, sometimes as a brutal but fiercely loyal fixer.

Now, Trump's former lawyer has broken completely with his onetime boss and handed the president's political opponents new weapons that could have serious implications for Trump.

First, Cohen told authorities that Trump had directed him to arrange payments to two women ahead of Election Day in 2016 to keep them quiet about sexual relationships they said they had had with Trump — allegations Trump denies.

Federal authorities call that a violation of campaign finance law — one for which Trump also may be culpable.

Later, Cohen admitted that he and other Trump aides continued negotiations with powerful Russians about a potential real estate project in Moscow well into the 2016 presidential campaign.

Cohen had told Congress in 2017 that the talks ended in January 2016, but his subsequent admission meant that Trump's aides had a channel open with Russia even as Trump was becoming the GOP front-runner and was denying he had any ties to Russia.

Prosecutors in New York City announced separately on Wednesday that they've signed a deal with tabloid publisher American Media Inc., in which they've agreed not to prosecute the company for its role in one of the payments Cohen arranged.

In exchange, AMI has admitted that it helped arrange a payment to onetime Playboy model Karen McDougal in order to help Trump's campaign keep her quiet. Earlier, the company had denied doing so.

AMI also appears to have agreed to cooperate with investigators going forward, and it may change its practices in terms of paying people. Here's how the U.S. Attorney's Office for the Southern District of New York described the deal:

The agreement also acknowledges, among other things, AMI's acceptance of responsibility, its substantial and important assistance in this investigation, and its agreement to provide cooperation in the future and implement specific improvements to its internal compliance to prevent future violations of the federal campaign finance laws.

Continuing to tell the truth

Cohen "continues to tell the truth about Donald Trump's misconduct over the years," Lanny Davis, an adviser to Cohen, said in a statement issued after the sentence was handed down.

"Michael has owned up to his mistakes and fully cooperated with [Justice Department] special counsel [Robert] Mueller in his investigation over possible Trump campaign collusion with Russian meddling in the 2016 election," Davis also said.

"While Mr. Mueller gave Michael significant credit for cooperation on the 'core' issues, it is unfortunate that SDNY prosecutors did not do the same. To me, their judgment showed a lack of appropriate proportionality."

Davis also suggested Wednesday that once the special counsel's Russia investigation was complete, Cohen would "state publicly all he knows about Mr. Trump – and that includes any appropriate congressional committee interested in the search for truth and the difference between facts and lies. Mr. Trump's repeated lies cannot contradict stubborn facts."

Trump: Nothing to do with me

Trump has dismissed Cohen's allegations. Although he has acknowledged arranging the hush-money payments to one of the women, he denies the underlying allegations by both women of sexual encounters with him years before the 2016 presidential race.

Trump called the payments a "simple private transaction" that had been elevated into something more serious by Democrats who are frustrated they haven't been able to find anything damaging to Trump in the Russia investigation.

The president argued on Twitter that if Cohen broke the law in the payments, it had no meaning for him and might not even be a federal crime anyway.

....which it was not (but even if it was, it is only a CIVIL CASE, like Obama’s - but it was done correctly by a lawyer and there would not even be a fine. Lawyer’s liability if he made a mistake, not me). Cohen just trying to get his sentence reduced. WITCH HUNT!

As far as the negotiations over a possible Trump Tower in Moscow, the president acknowledged he had "lightly" looked into the project at the same time as he was campaigning but said he had done nothing wrong; he decided not to pursue the project.

....Lightly looked at doing a building somewhere in Russia. Put up zero money, zero guarantees and didn’t do the project. Witch Hunt!

Trump says the accounts Cohen has given to investigators are lies made up in order to reduce the sentence he was facing for other crimes. Cohen also pleaded guilty to tax evasion and bank fraud, which added to the potential sentence for which he was eligible.

"Neither a hero nor a patriot"

An attorney for adult film star Stormy Daniels, one of the women who received a hush-money payment arranged by Cohen, said in an impromptu press conference outside the Manhattan federal courthouse Wednesday that Cohen "is neither a hero nor a patriot."

Attorney Michael Avenatti also said the scheme alleged by Cohen that formed the basis of the campaign-finance violations amounted to seeking to effectively buy an election back in 2016.

In a tweet posted before the sentencing, Avenatti also said that Cohen would learn his punishment "for his role in the Trump criminal enterprise and the rigging of an election." After saying he intends to depose Cohen, Avenatti added, "Trump is in a lot of trouble."

Today Michael Cohen will be sentenced to substantial jail time for his role in the Trump criminal enterprise and the rigging of an election. We will then depose him under oath in order to fully disclose all of the facts to the American people. Trump is in a lot of trouble.

Authorities said Cohen's case demonstrates that even powerful people can't get away with this kind of criminal conduct.

"Michael Cohen is a lawyer who, rather than setting an example of respect for the law, instead chose to break the law, repeatedly over many years and in a variety of ways," said Deputy U.S. Attorney Robert Khuzami, whose office in Manhattan prosecuted Cohen.

"His day of reckoning serves as a reminder that we are a nation of laws, with one set of rules that applies equally to everyone," the federal prosecutor also said of Cohen.