Accessibility links
Arctic Report Card Documents 'Cascading Effects' Of Warming Ocean Temperatures The U.S. government says warming ocean temperatures and melting ice have resulted in the "most unprecedented transition in history" in the Arctic, leading to extreme weather events across the globe. 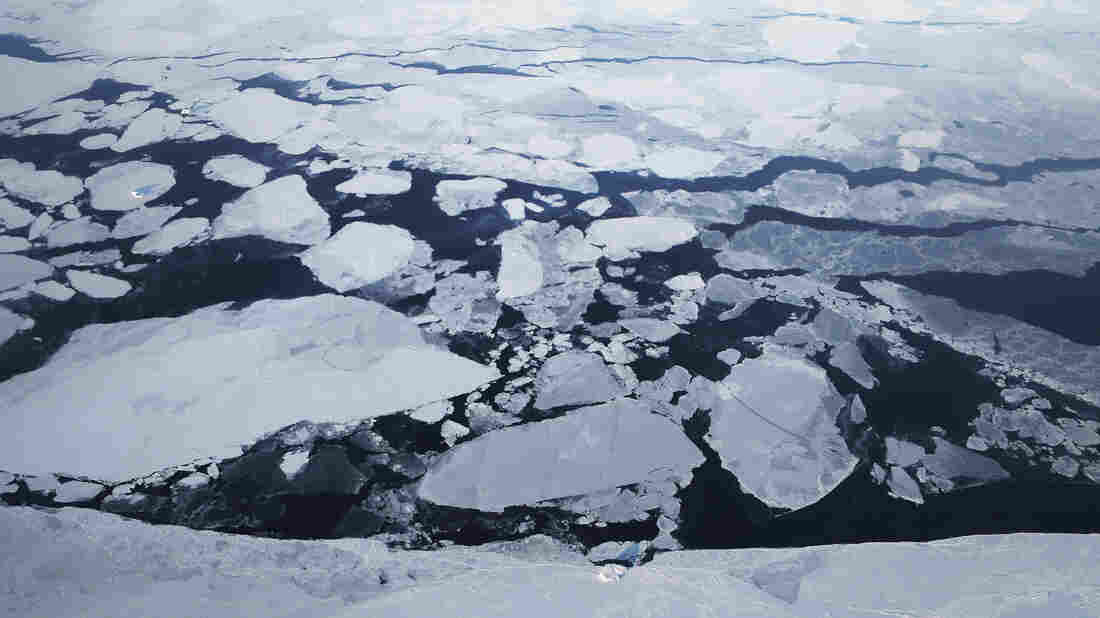 Sea ice is seen from NASA's Operation IceBridge research aircraft off the northwest coast of Greenland in March 2017. A new report says rapid warming over the past three decades has led to a 95 percent decline of the Arctic's oldest and thickest ice. Mario Tama/Getty Images hide caption 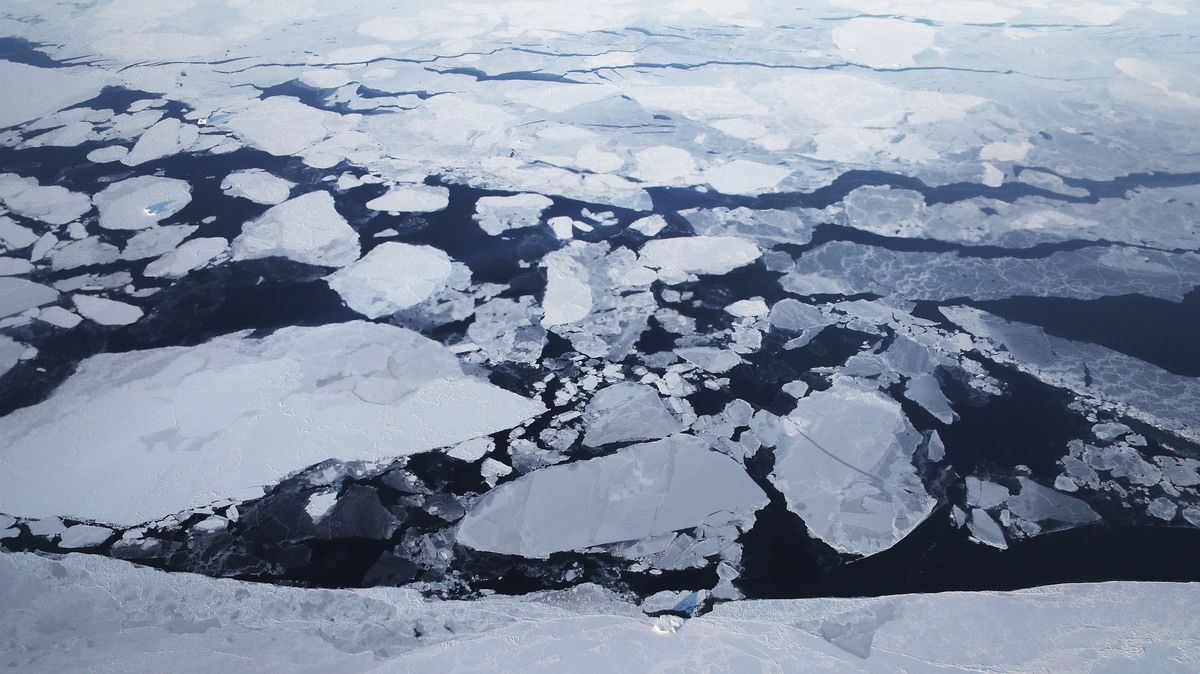 Sea ice is seen from NASA's Operation IceBridge research aircraft off the northwest coast of Greenland in March 2017. A new report says rapid warming over the past three decades has led to a 95 percent decline of the Arctic's oldest and thickest ice.

The Arctic has experienced the "most unprecedented transition in history" in terms of warming temperatures and melting ice, and those changes may be the cause of extreme weather around the globe, according to the National Oceanic and Atmospheric Administration's 2018 Arctic Report Card.

The annual report released Tuesday says rapid warming over the past three decades has led to a 95 percent decline of the Arctic's oldest and thickest ice. This research comes as world leaders convene at the U.N. climate summit in Poland this week where they are debating whether to embrace the findings of an October report by the International Panel on Climate Change.

The melting of sea ice is one of the most conspicuous examples of climate change in the Arctic, and scientists say it may be the catalyst for extreme environmental events across the world.

According to NOAA, the Arctic is warming at twice the rate of the rest of the globe, which is melting some of the region's oldest ice. That old ice is resistant to melting and helps keep the Arctic cold in the summer when the majority of ice melts off, says Emily Osborne, lead editor of the report and a researcher with NOAA's Arctic Research Program.

"When observations started back in the '70s, we had about 16 percent of the ice cover in the Arctic [that] was very old or more than four years old," she tells Here & Now's Robin Young. "And this year we're seeing that ... less than 1 percent of the Arctic ice pack is very old, multiyear ice."

Scientists observed record low sea-ice levels in the Bering Sea, off western Alaska, during the winter when ice is supposed to accumulate, according to the report. Instead, the Bering Sea lost a section of ice the size of Idaho.

Without sea ice cover to deflect sunlight, the ocean will absorb more sunlight and the planet will continue to get warmer, Osborne says. According to the report, Arctic Ocean temperatures are rising and sea ice levels are falling at rates not seen in the past 1,500 years.

"This melting is not going to affect sea-level rise in itself because the ice is already in the ocean," Graham told Here & Now's Jeremy Hobson earlier this year. "But if this leads to a larger warming area of the Arctic, you could start melting land glaciers on Greenland that could contribute to sea-level rise."

Along with the lack of ice and the rising temperatures, Osborne says harmful algae blooms in the Arctic Ocean are poisoning marine life and affecting coastal communities that rely on the ocean for their economic survival.

Arctic temperatures can also alter the behavior of the jet stream, the atmospheric currents that influence global weather, Osborne says. A wavy jet stream can cause extreme weather, such as last year's winter storms in the U.S. and an unusual cold snap in Europe this March referred to as "The Beast From the East."

"As the Arctic is warming at this really rapid rate, the jet stream is in fact slowing down, and as it slows, it creates these wobbles," she says. "When we have this wavy jet stream pattern, which can really persist as we saw in 2018 for months at a time, we have these really different air masses reaching different parts of the globe."

The report also found that reindeer and caribou populations have declined 56 percent in the past two decades because of environmental changes in the Arctic. And microplastic is accumulating in higher concentrations in the Arctic Ocean than in all other ocean basins in the world.

As Arctic ice continues to melt, the opening of new waterways in the Arctic Ocean can also have geopolitical consequences as countries compete for new resources, Osborne says. It could also leave the U.S. Northern border and Alaska more vulnerable.

And yet, the U.S. has joined with Saudi Arabia, Kuwait and Russia in refusing to endorse the IPCC report. President Trump has also said he will withdraw the U.S. from the Paris Agreement.

Despite the lack of support in Washington, Osborne says scientists are focused on arming people in "the ground zero of climate change," such as those who live in the Arctic, with this information, so they can adapt to environmental changes.