Accessibility links
Should You Sell When The Market Drops? Life Kit What should you do when the stock market tanks? Don't sell. We explain that and how to grow a nice nest egg and avoid that four-letter word that starts with F — fees. 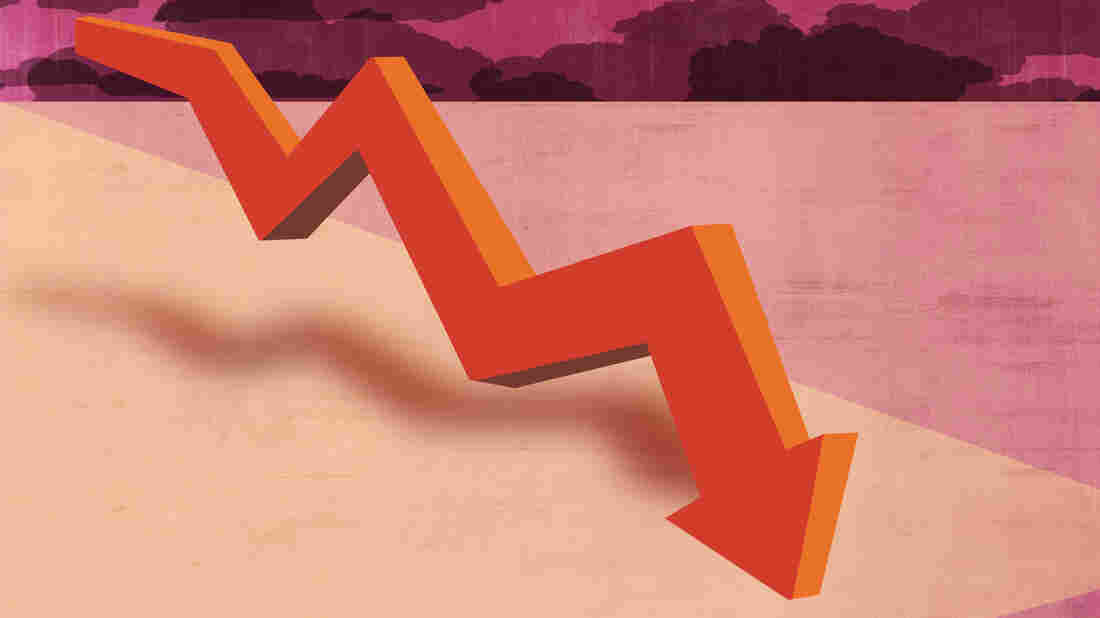 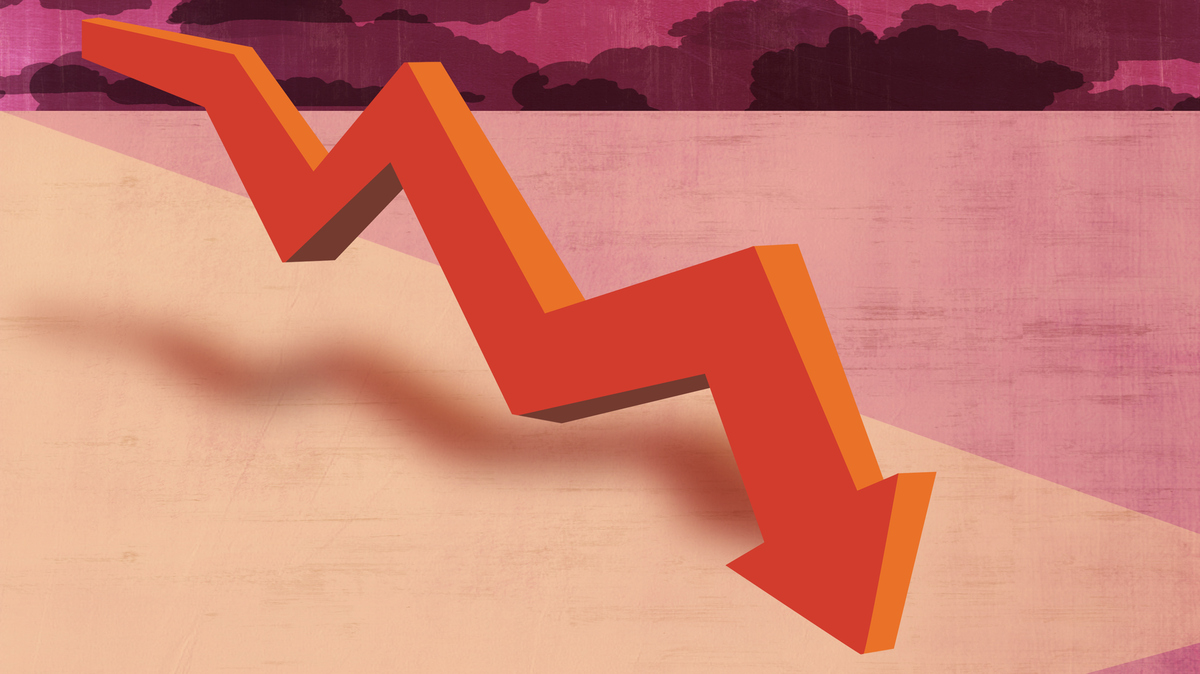 It's been a wild week for the financial world. At one point, the U.S. stock market was down nearly 20 percent from its peak over fears about the impact of the coronavirus.

We explain how to ride out a stock market crash. And how to grow a nice nest egg and avoid that four-letter word that starts with F — fees. Those can actually do more damage over time than a market downturn.

Here's what to remember:

Should You Pay For Financial Advice?

When stocks are in free fall, it's scary. You watch your retirement portfolio drop in value. Try thinking about it like a roller coaster. Those can be scary too, but you only get hurt if you jump off the roller coaster. It's better to hang in there and ride back up when the market recovers.

The problem with selling, is nobody knows when the market will turn around and go roaring back up. So if you sell, your retirement fund can get left in a ruined heap at the bottom after the market recovers.

This story comes from Life Kit, NPR's podcast with tools to help you get it together. Listen to the podcast episode at the top of the page, or find it here.

"When you sell in the midst of a crisis, you can put yourself in a position where your portfolio will never recover," David Swensen told NPR for our Life Kit podcast episode on investing. Swensen, author of Unconventional Success, oversees investments for Yale University's endowment, which has the best returns of any in the world.

"Losing money feels really painful," says Brigitte Madrian, a behavioral economist at Brigham Young University. She says the, "rule of thumb is that a loss is twice as bad as an equal-sized gain." People end up feeling like they can make the pain stop by selling stocks — even though that's the wrong move.

The best way to stop that painful feeling is to resist the gut-level impulse and think. Madrian, who studies how our human impulses can cause us to make really bad decisions when it comes to money and investing, says "if you're feeling really emotional about something — really excited, or you're really afraid — that's probably not the best time to make a financial decision."

2. Rebalance your portfolio at least once a year

If you want to indulge your human impulse to do something in the face of a market crash, Swensen says there is one very good thing to do. It's called rebalancing: "selling what's gone up and buying what's gone down," says Swensen. "And it's incredibly powerful."

If you have a well designed pie-chart of investments prior to the market crashing, then you have an opportunity to rebalance. For example, If stocks have fallen in value and treasury bonds have increased in value (after investors rushed to buy them as safer investments), then your pie slice for stocks has gotten smaller in value as a percentage of your portfolio. And your bond slice has gotten bigger.

So to rebalance, you sell some of the treasury bond part of your portfolio and buy more stocks. This is not random. You are sticking to your original investment plan. Buying low and selling high in a disciplined way to get your pie chart of investments back in balance. (By 'buying stocks' Swensen means buying the entire U.S. stock market through low-cost index funds — more on that below.)

Think of it this way: rebalancing is the 101 lesson of investing — to buy low, sell high. That, Swensen says, is a good way to make money. And you don't even have to rebalance often.

"At least once a year and, certainly, after a big move in the markets, make sure that your portfolio is where you want it to be," says Swensen.

If you're in a retirement savings plan, for example a 401k through your employer, Madrian says some plans have an automatic rebalancing feature that will allow you to rebalance once or twice a year without you having to do anything at all.

3. Don't pick your own stocks.

It makes sense to be invested in the stock market because over long periods of time, stocks have had much better returns than bonds or other investments. But that does not mean that it's a good idea to buy individual stocks, like Amazon or Tesla or whatever seems like the hot company.

Here is the dirty little secret of Wall Street. It's almost impossible, even for professionals, to pick individual companies whose stocks are going to outperform the overall market. Over time, eighty to 90 percent of mutual fund managers —80 to 90 percent — fail at this.

So if you're thinking you can read some investing magazines, watch some investing shows on TV, and pick some winner stocks, Swensen says, "it's basically a fool's errand."

"Think about these professionals who are devoting their careers to beating the market - have such a hard time beating the market. How can somebody who's casually spending, you know, a little bit of time on the weekends compete? They can't."

So what's the right way to own stocks?

4. Invest in index funds, not actively-managed funds. And don't pay too much in fees.

Index funds differ from actively-managed mutual funds, some of which charge fees that are 10 times what you'd pay for an index fund. Index funds are what's called 'passively' managed — they just buy a list of stocks without trying to pick winners or losers.

In an actively-managed fund, you're paying professional investors to pick a basket of stocks for the fund to invest in that are supposed to outperform the overall market. But as we say above, the vast majority fail to do that after you factor in the fees they charge you.

"When you look at the history," says Swensen, "the overwhelmingly right choice for investors is to take this index fund approach. And you'll be far better off than with the actively-managed alternative."

Exchange-traded funds (ETF's) are another form of "passively-managed" funds like index funds. But Swensen cautions to avoid ETF's or index funds that are too narrow in scope. (Here's more on ETF's.)

5. Diversify your portfolio. Here's a sample recommended portfolio from David Swensen which he says will serve most investors well:

Experts say if you want to make big changes to your portfolio, again don't do it right after stocks crash. Some suggest what's called 'dollar cost averaging' where you make a series of gradual moves over a year and a half to end up where you want to be.

As people approach retirement age and once they're in retirement, Swensen says, things get more complicated. At that point in your life, many experts say it may make sense to get some professional advice from a financial advisor.

The investment firm Vanguard is run essentially as a non-profit, and while Swensen says he'd rather not plug any one financial institution, its low-cost, non-profit business model is rare.

Vanguard's founder, the late Jack Bogle, set up the company with the mission to give people a range of index funds and advice that's in the customer's best interest. And Swensen says people should know that.

"I wish there were 20 not-for-profit organizations out there that were serving investor interests, but there aren't," Swenson says.

Other investing experts recommend The National Association of Personal Financial Advisors, or NAPFA. It's advisors are "fee-only" which means they only get paid by you and therefore don't have conflicts of interest. Other advisors can make extra commission money by steering you into investments, such as actively managed mutual funds, that have high fees.