Accessibility links
Review: 'Mortal Engines' Runs Out of Gas Long on CGI but short on any real inspiration, this adaptation of a fantasy series about giant cities that roam a post-apocalyptic landscape quickly runs out of gas. 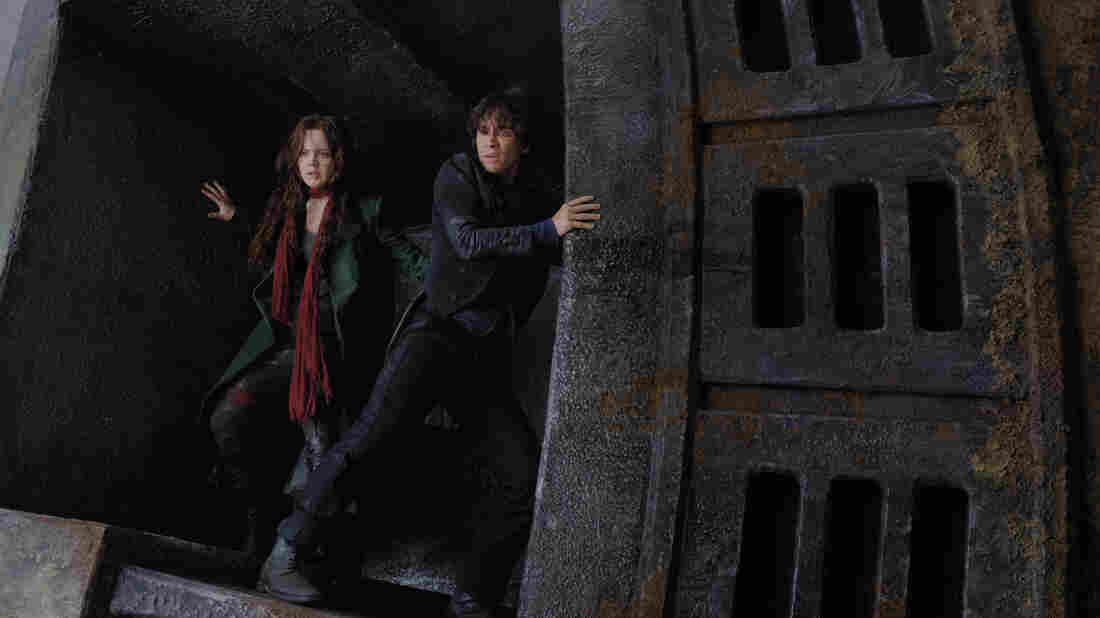 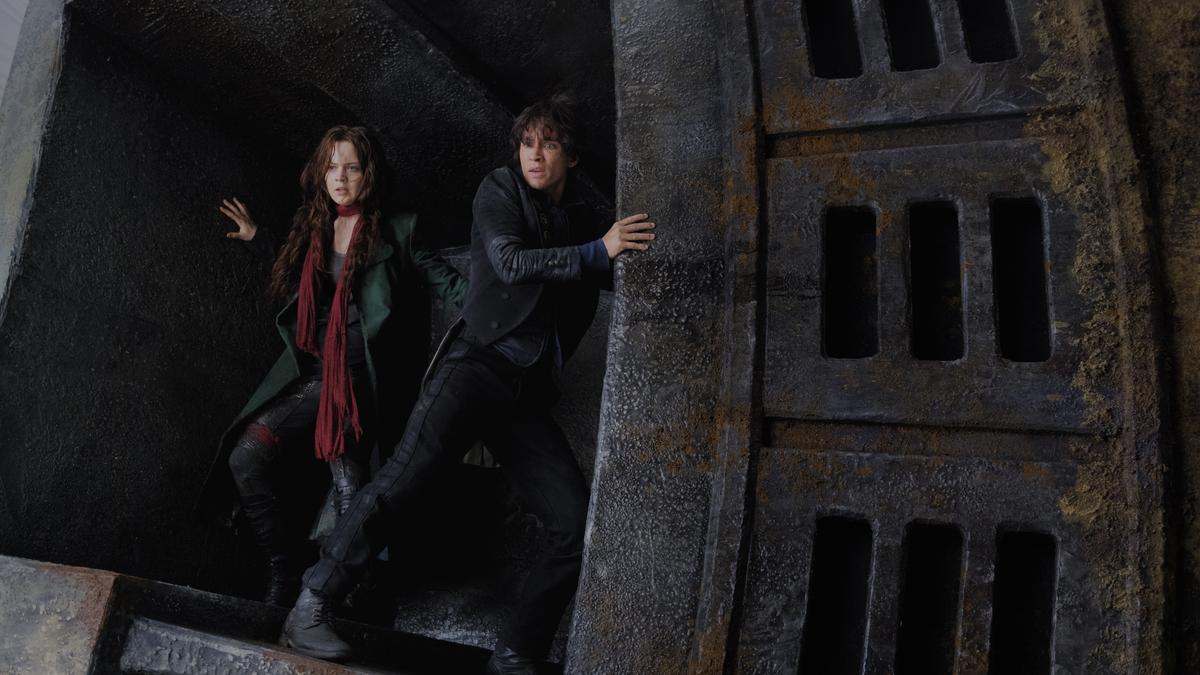 Hester (Hera Hilmar) and Tom (Robert Sheehan) conspire to throw a monkey wrench into the works in Mortal Engines.

In the post-cataclysm future depicted by Mortal Engines, inhabitants of a steampunk city seek and collect pop culture relics and "old tech" from the 21st century. That's apt, since this visually lively but narratively inert movie is also assembled from such debris. The story derives from a young-adult fantasy novel, but most of the scenario echoes Star Wars, Mad Max, The Terminator or Howl's Moving Castle.

Like that Miyazaki cartoon, Mortal Engines puts an edifice in the road. The remnants of London have been mounted on a massive motorized chassis, with what's left of St. Paul's Cathedral at the top. This "predator city" attacks and consumes smaller mobile municipalities, such as the Bavarian mining village that vainly attempts an escape in the movie's nutty opening sequence.

London captures and consumes such unfortunate towns, using them for fuel to continue its prowls. Whenever that happens, boyish Tom Natsworthy (Robert Sheehan) rushes to the city's bowels, assigned to retrieve interesting and useful artifacts of "the ancients" before they're fed into a massive furnace. Tom is a history-museum underling, but with backup skills as a fighter pilot that will prove useful.

London is ravenous, yet not genocidal. Residents of swallowed towns are offered refuge in the city, although a public announcement warns that "children may be temporarily separated from parents." (The movie eventually offers another reference to today's refugee crises, but the political subtext is less than robust.)

Among the itinerant city's new arrivals is Hester Shaw (Hera Hilmar), a scar-faced beauty whose goal is to kill Thaddeus Valentine (Hugo Weaving), one of London's civic leaders. She has good reason, and Tom soon becomes her ally. Their adventures send them to a mysterious East, where they're assisted by outlaw and fellow pilot Anna Fang (Korean-American pop star Jihae). She looks tougher than Tom, but neither of them is the Han Solo the story craves.

Thaddeus intends to destroy something a lot like the Great Wall of China, thus allowing London to pillage a pan-Asian land with a culture that draws mostly from China and India, but with a population that includes people of apparent African descent. (London is also multiethnic, further muddling the West-ravages-East allegory.)

That's just a cursory account of Mortal Engines, which would have benefited from losing a few supporting characters, several flashbacks and at least one subplot. Yet the movie's major weakness is not story, but characterization.

The only actor who holds the screen is Weaving, and even he suffers from a cardboard role and plywood dialogue. Hilmar, Sheehan and Jihae are all as bland as their parts, lacking charm, swagger and humor. The disastrous absence of the last quality can partly be blamed on the script, which hazards a joke about every 45 minutes.

Thaddeus Valentine probably isn't intended as a stand-in for the filmmakers, but Mortal Engines is the product of mechanism as ungainly as the movie's locomotive London. The movie's writers and producers include Peter Jackson, Fran Walsh and Philippa Boyens, veterans of those lumbering, overlong and increasingly tiresome Tolkien adaptations. Director Christian Rivers, here helming his first feature, has labored for Jackson's operation since 1992's Braindead (also known as Dead Alive).

Like all those Rings and Hobbit flicks, the movie trades in mountainous New Zealand landscapes and intricate CGI that's well-integrated with the live action. It doesn't benefit from a well-loved saga, though, and the tale it does offer is far from memorable. Mortal Engines marshals billions of pixels and barely an iota of inspiration.