Accessibility links
Well-Versed: 'Spider-Man: Into The Spider-Verse' Is A Fun, Warm-Hearted Treat Many Spider-Men and -Women meet up in this "graphically dazzling, generously imaginative, nakedly optimistic, mercilessly funny" and refreshingly inclusive animated film.

Well-Versed: 'Spider-Man: Into The Spider-Verse' Is A Fun, Warm-Hearted Treat

Well-Versed: 'Spider-Man: Into The Spider-Verse' Is A Fun, Warm-Hearted Treat 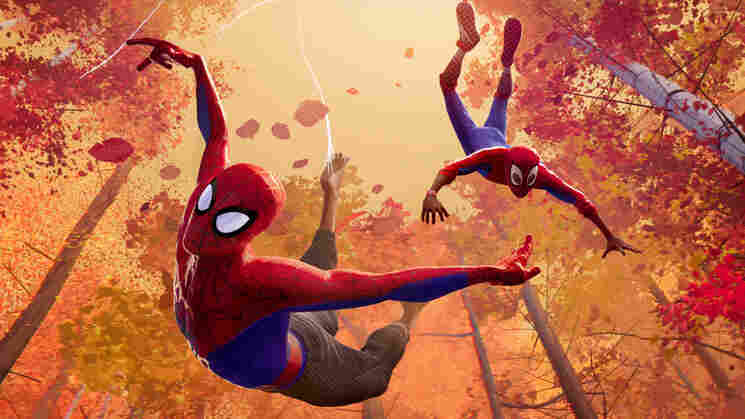 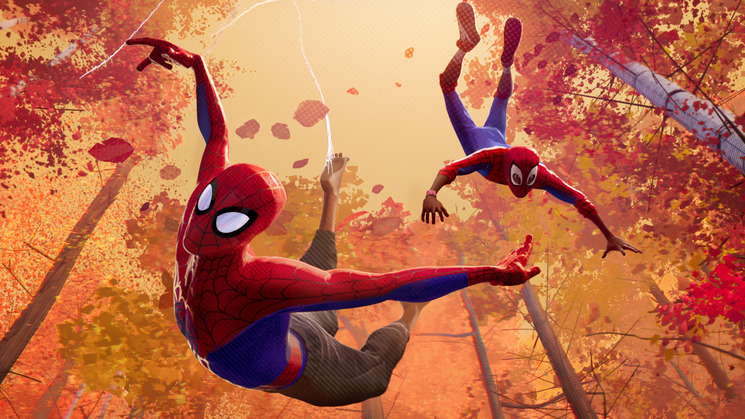 Listen, bud: Peter Parker (voiced by Jake Johnson) and Miles Morales (voiced by Shameik Moore) swing into action in Spider-Man: Into the Spider-Verse.

It's hard to fathom that the same Sony Pictures that, in 2012, decided the best way to expand the appeal of its live-action Spider-Man franchise was to start over with lesser movies, has now become smart enough to put its resources into a superb new — really new — Spider-Man cartoon. Maybe someone in a Culver City boardroom got bit by a radioactive MacArthur Fellow.

Whatever the reason, for a powerful corporation to relax its grip on an ancient specimen of blue-chip IP enough to let the creatives have some fun is a rare thing, and one that should not go unheralded. Marvel Comics weathered the ire of reactionary fandom back in 2011 when it introduced Miles Morales, a Spider-Man no less Amazing than that nerdy orphan Peter Parker, but for the fact he was the son of a Puerto Rican ER nurse and an African-American beat cop. Miles became the Spider-Man of the publisher's "Ultimate" line, a spiral arm of the Marvel Universe that...

...you know what? Don't worry about it. To cite the refrain of this graphically dazzling, generously imaginative, nakedly optimistic, mercilessly funny and inclusive-without-being-all-pious-about-it animated oydssey called Spider-Man: Into the Spider-Verse, "Anyone can wear the mask."

After a parade of intentionally glitchy studio logos cues us that things are going to be a little different here than in the half-dozen Sony-branded Spider-Man movies (give or take a couple of the twenty-odd Marvel Studios movies), the filmmakers drop us head-first into the reality of Miles, a bright, artistically-inclined kid with some serious ambivalence over having earned a coveted slot at a competitive boarding school.

The filmmakers in question: Lego Movie and 21 Jump Street co-directors Phil Lord and Christopher Miller, formerly of Solo: A Star Wars Story. Lord co-wrote the screenplay with Rodney Rothman, who is credited, along with Bob Persichetti and Peter Ramsey, as one of its three directors. (Animated films have their own impenetrable continuity.)

Anyway, Spidey's birth name and skin tone aren't the only ways in which this webslinger is, as they say in the comics, All-New. The movie combines hand-drawn and digital animation with still frames, and even the occasional text panel, not to mention some graphic treatments of Spidey's signature onomatopoeia (rivaled only by Wolverine's snikt! in Mighty Marvel eminence) to achieve a stylized, kinetic visual language unlike any animated or live-action film that came before.

The crackling imagery occasionally recalls the multimedia collages that artist Bill Sienkiewicz used to blow Marvel fans' four-color minds back in the '80s. (Specifically, Spider-Verse's character design for the Marvel crimelord The Kingpin is clearly borrowed from the Sienkiewicz-painted graphic novel Daredevil: Love and War.)

And my god, it's full of stars doing warm, expressive voice work — Shameik Moore as Miles, plus Mahershala Ali, Brian Tyree Henry, and Lily Tomlin, among many, many others — but this Verse would rhyme if you watched it without sound, because the animators have achieved an almost hypnotic effect, without compromising the clarity or emotional intelligence of the storytelling.

About that: Spider-Verse introduces several narrators, whose divergent accounts of similar events are rewarding enough to make us forget they're delivering exposition.

In ancient times, DC Comics referred to the noncanonical adventures of Superman as "Imaginary Stories," as though all the lower-case imaginary stories were matters of fact. More recently, recurrent reboots keep re-re-restarting the clock, stripping these venerable characters back to the core motivations and identities that made them resonate with their first generation of fans.

Into the Spider-Verse inverts all that memory-holing, embracing a more generous and ecstatic truth. As Lord and Miller's old space-pirate pal once said, "It's true. All of it."

Without getting all hung up on plot, some messing about by The Kingpin (Liev Schreiber) prompts what you might call a crisis on infinite earths, allowing the just-bit high-schooler Miles to meet up with confident twenty-something grad student Spidey (Chris Pine, once again getting that swagger-to-humility ratio just right) as well as divorced, depressed, forty-something dad-bod Spidey (Jake Johnson).

Cue that sweet, mutually nurturing mentor-mentee vibe. (This is the Creed of Spider-Man movies, among many, many other things.) And that's before we get to Spider-Gwen (Hailee Steinfeld), Spider-Man Noir (Nicolas Cage, who calls one of his foes a "hard-boiled turtle-slapper"), futuristic arachnid-themed vigilante Peni Parker (Kimiko Glenn), and of course Peter Porker, the Spectacular Spider-Ham (John Mulaney). I'd need ten thousand words and zero scruples to give away all of Spider-Verse's delightful visual gags, so I'll constrain myself to pointing out that Spider-Ham's lyrca-masked snout sports a second pair of oval-shaped eyes which mirror the expressions of his (?) regular (??) eyes. Even if you want to avert your noseeyes, you cannot.

The result of all this magnanimous mayhem is that Into the Spider-Verse allows its creators, and us, to have our cake and a bunch of other cakes and eat all of them, too. It's also disarmingly open-hearted for something so postmodern. The phrase "I love you" gets spoken aloud more times, and by a greater number of characters, than in any prior superhero movie and probably half the world's rom-coms.

For all its visual dazzle, Spider-Verse is working the same optimistic side of the street as the Richard Donner Superman of 40 years ago and the Wonder Woman of last year. It believes in heroism and sacrifice, even when it's practiced by a wisecracking pig, who I'm pretty sure is seen eating a hot dog at one point. (It's the role Mulaney was born to play, baby.)

Anyone can wear the mask. And in this movie, just about everyone does.