Accessibility links
In 'Roma,' A Director Re-Creates The City — And The Caretaker — Of His Youth Alfonso Cuarón, now an Oscar-winning filmmaker, has a new movie set in his childhood neighborhood in Mexico City. But it's really about the live-in nanny and housekeeper who helped raise him. 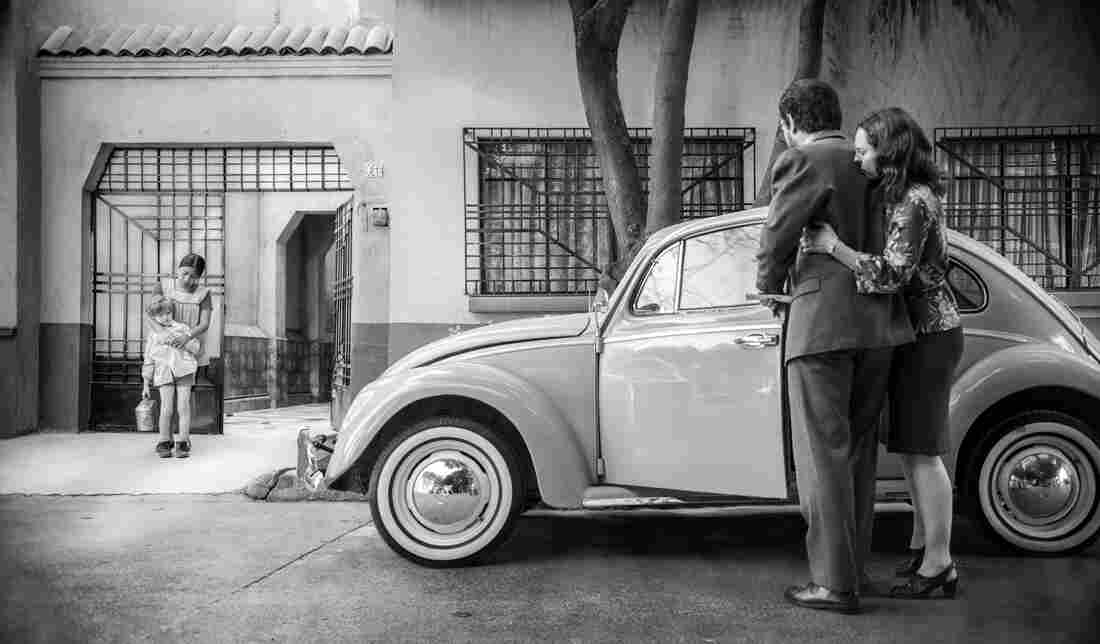 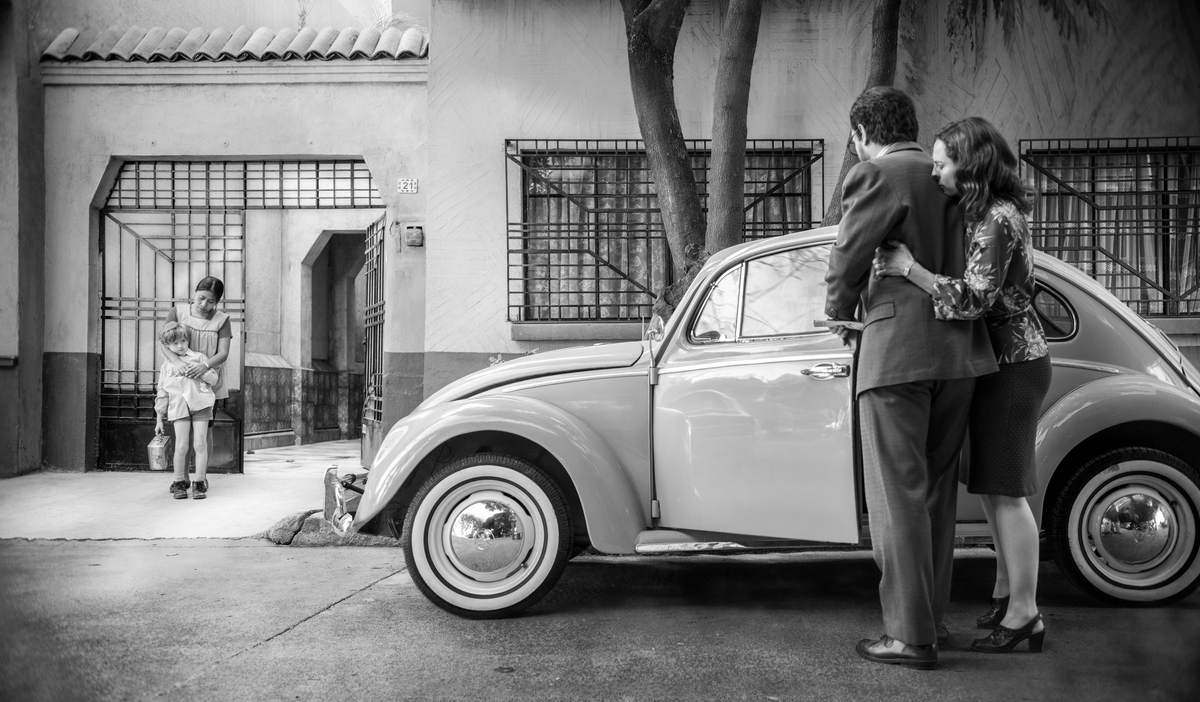 The movie Roma revolves around Cleo (Yalitza Aparicio), the live-in housekeeper and nanny for Señor Antonio (Fernando Grediaga) and Señora Sofia (Marina de Tavira) and their children (including Pepe, played by Marco Graf).

In his new film, Alfonso Cuarón brings back to life the middle-class neighborhood where he grew up — the street vendors, the barking dogs, the occasional parade. It lends the film its title: Roma.

He also chronicles the daily rituals of the woman who cleaned house and helped care for him and his three siblings. Roma focuses on Cleo, a character based on Cuarón's real-life nanny and housekeeper: Liboria Rodríguez, known as "Libo."

"We called her mamá," Cuarón says. "She came into my life when I was just a newborn. ... She would wake me up, prepare breakfast. She would take us to the movies. We would go with her to the market."

Overly Orchestrated 'Roma' Is An Epic Of Everyday Life In Mexico

Rodríguez came from a small village in the state of Oaxaca. Cuarón remembers spending hours with her in the kitchen as she cooked for the family and told stories about her own childhood — far from cosmopolitan Mexico City.

"She would talk about her hardships," he says. "Remembering as a child being cold — my concept of being cold was the day that I didn't bring my sweater when I went to the movies. Or being hungry — my concept of being hungry was that day they that took so long to have dinner ready, or whatever, you know? Or she would talk about her father to be tended by the witch doctor. Of course for me, [it] was so exciting the whole idea of a witch doctor, and I was not considering the lack of health services that she would have."

Cuarón is now 57. He won two Oscars for Gravity, in both directing and editing. He's also known for his films Y Tu Mamá Tambien and Children of Men, and directed a Harry Potter movie.

His newest film, however, is more personal: a meticulously constructed, black-and-white, 1970s period piece set in Mexico City, and acted in Spanish. It's a tribute to his childhood and the woman who helped raise him.

Cuarón says it took time for him to recognize the economic class and racial differences that permeate Mexican society. He says he came to realize he grew up with what he calls a "perverse relationship of convenience" — Libo was part of the family, but also the hired help.

"In the same breath it's: 'We really love you, but go and wash the clothes, and bring the Twinkie wonders, and make a smoothie for me,' he says. "But at the same time, when everything goes wrong, it's your fault. 'Why you didn't clean the dog poo?'

"She has three seconds of sitting with the family to watch TV — but on the floor," he adds. "And soon after she's starting to enjoy herself, to be told to bring some tea or coffee."

Cuarón wanted to depict a more realistic domestic worker — not the fair-skinned maid with meticulous braids and starched uniforms of melodramatic telenovelas: "the very beautiful domestic worker that makes it because the prince of the house notice[s] her and takes her from rags to riches," he says.

In the 1990s show María Isabel, for instance, the indigenous maid marries a wealthy widower. That's a typical narrative.

"And it's also always played by a very white actress," Cuarón says. "In Mexico, that is a deeply racist country, even if some people try to deny it. ... The other kind of archetype would be the one that is mean and steals. Something is missing in a house. The first one to be blamed is the domestic worker."

By contrast, in Roma, Cleo scrubs floors and washes laundry by hand. And she chats with her friend in Mixtec — an indigenous language from Oaxaca.

Cleo also falls for a young man who turns out to be a member of Los Halcones, a government-supported paramilitary group. She witnesses the 1971 Corpus Christi massacre, when Los Halcones killed over 100 student protesters. Cleo suffers her own traumas, but she's also a hero. 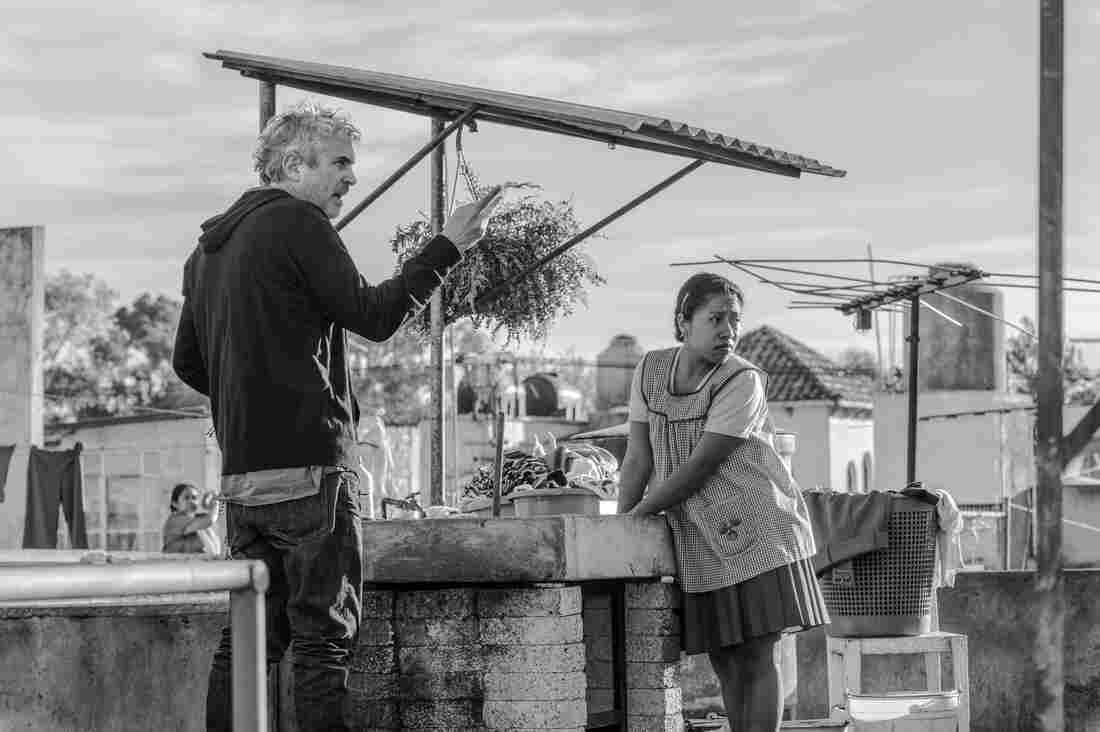 For the lead role of Cleo, director Alfonso Cuarón cast the first-time actor Yalitza Aparicio, a native of the state of Oaxaca. Carlos Somonte/Netflix hide caption

Cuarón used almost all first-time actors for Roma, casting his film with people who resembled those from his memories. After auditioning thousands for the role of Cleo, he found his leading lady in 24-year-old Yalitza Aparicio.

Aparicio says she'd never imagined that she might be the lead in a movie. She had just finished studying to be a preschool teacher in Tlaxiaco, Oaxaca when her sister requested that she accompany her to the casting call. Instead of her sister, who was pregnant at the time, she got the gig.

She says she had no idea who Alfonso Cuarón was, and had never seen his movies. But the director says he recognized in her the same face and spirit as his Libo.

'People Of The Clouds': A Story Of Ghost Towns And Great Migrations

And Aparicio says Cuarón entrusted her to portray Libo authentically — to demonstrate that such women do exist. Her own mother was a domestic worker, and she notes that many women leave their rural communities to clean houses and care for children — often leaving behind their own sons and daughters.

Yalitza Aparicio's portrayal is much appreciated by women like Perla Jiménez, an art historian who lives in Oaxaca. She says that Aparicio's appearance in the movie, with brown skin like her own, seemed to be proposing a new standard of beauty.

Jiménez's heritage is Zapotec, another indigenous culture of Oaxaca. She thanks Cuarón for celebrating indigenous women and all domestic workers. The movie dignifies their work, Jiménez says — work that is sometimes hidden and seen as shameful.

Roma actress Marina de Tavira agrees. She portrays the mother, Sofia, who has a troubled marriage.

"She's going through a very stressful moment, and she has a very complex relationship with Cleo," de Tavira says. "Even if it's an employer-employee relationship, it's also very intimate and very family-like. She struggles with that, because she's also a silent witness of all the pain she's going through."

Like her character, the actress is also a single mother, and she relies on a woman named Guadalupe to help her raise her son Tadeo.

"Because women together can bring up children in a very, very special way and help each other," de Tavira says. "Guadalupe and I know exactly the clock of Tadeo, and we're remembering each other about his medicines, about what he's going to eat. I mean, we're like two brains working in the same direction."

Outside the Cine Tonalá movie theater in Mexico City's Roma district last weekend, 13-year-old Danae Quiroz said the movie made her reflect on Mexico's classism and racism toward domestic workers.

Her father, Andrés Quiroz, said that he was glad the movie breaks stereotypes. The main character of Roma doesn't end up with a prince, he says. Instead, she earns a family's love and respect.

Nina Gregory edited this story for broadcast. Patrick Jarenwattananon adapted it for the Web.