Accessibility links
'An Indescribable Feeling': Virgin Galactic Makes Historic Trip To Edge Of Space Four years after another test flight ended tragically, the company is celebrating a milestone: Its manned spacecraft reached an altitude of more than 51 miles. 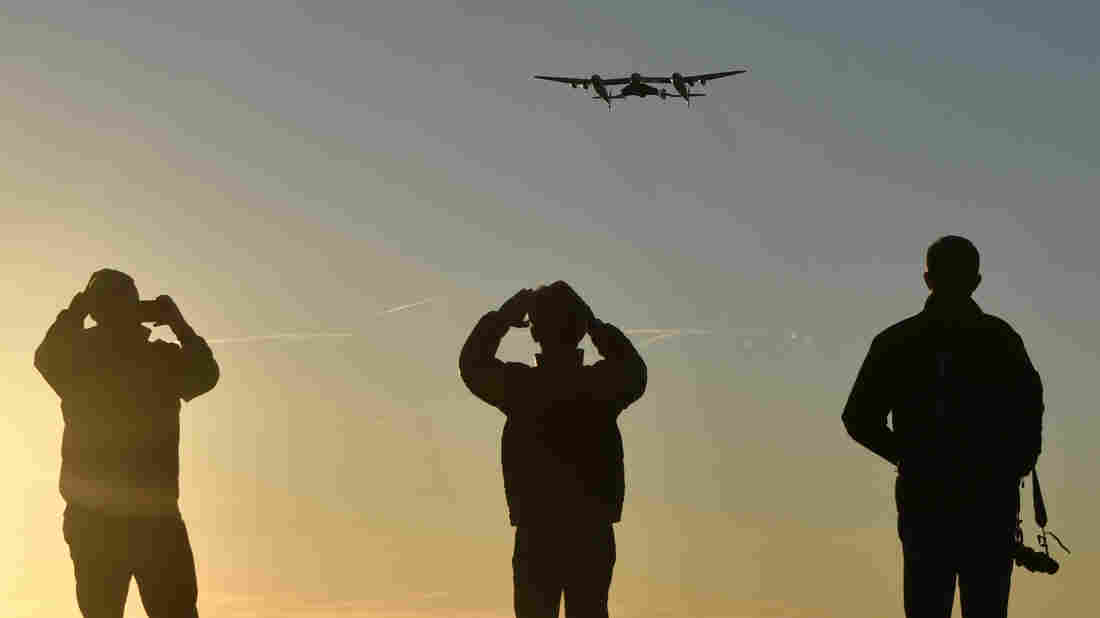 Observers watch Virgin Galactic's SpaceshipTwo take off for a suborbital test flight of the VSS Unity in Mojave, Calif. The company marked a major milestone Thursday as Unity made it to a peak height of more than 51 miles, meeting the Federal Aviation Administration's definition of spaceflight. Gene Blevins/AFP/Getty Images hide caption 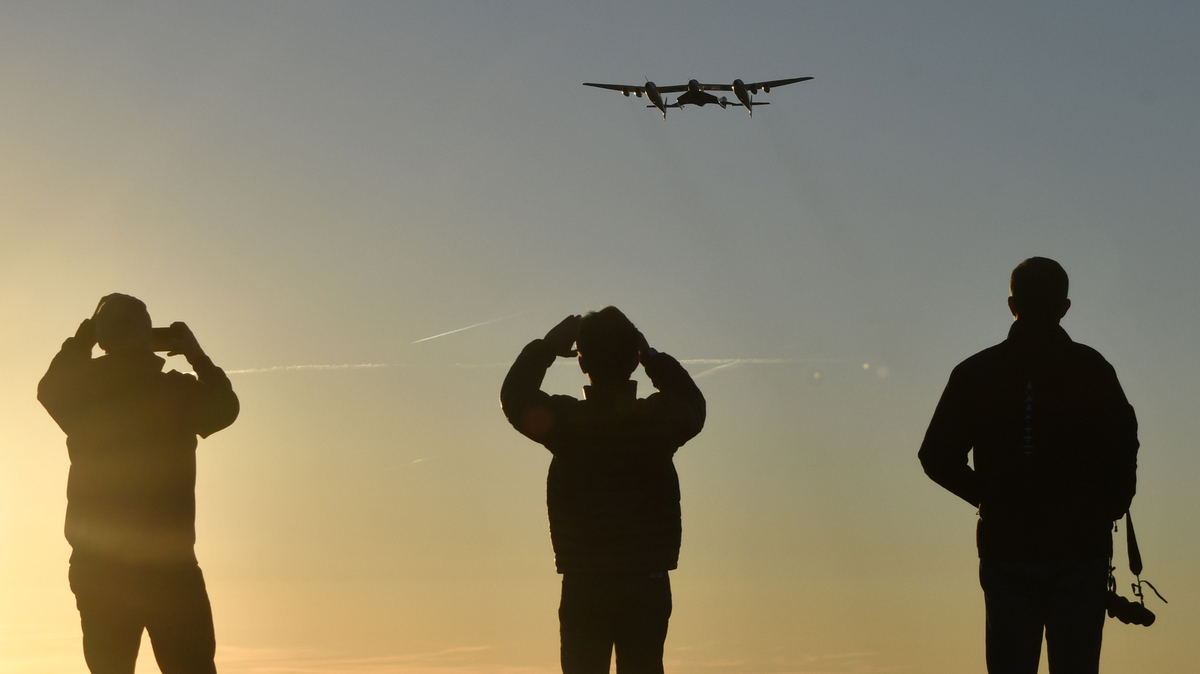 Observers watch Virgin Galactic's SpaceshipTwo take off for a suborbital test flight of the VSS Unity in Mojave, Calif. The company marked a major milestone Thursday as Unity made it to a peak height of more than 51 miles, meeting the Federal Aviation Administration's definition of spaceflight.

Virgin Galactic says it has reached a rather lofty milestone.

During a test flight Thursday morning in Mojave, Calif., a pair of pilots flying the company's SpaceShipTwo spacecraft hit an altitude of 51.4 miles. That height clears the 50-mile threshold that is sometimes considered the boundary of space.

"Today, as I stood among a truly remarkable group of people with our eyes on the stars, we saw our biggest dream and our toughest challenge to date fulfilled," Virgin founder Richard Branson said in a statement released Thursday. "It was an indescribable feeling: joy, relief, exhilaration and anticipation for what is yet to come."

A close-up of Virgin Galactic's SpaceshipTwo, seen Thursday during a test flight in Mojave, Calif. The craft, known as the VSS Unity, took off attached to an airplane, then fired its rocket motors to reach new heights. Gene Blevins/AFP/Getty Images hide caption

"Like the early days of aviation, these commercial space flights take grit and innovation — the very attributes it takes to blaze a trail for generations to follow," the FAA said in its announcement. "It's that grit and innovation we want to recognize."

Congrats to @VirginGalactic on SpaceShipTwo successfully flying to suborbital space with our four @NASA_Technology payloads onboard. With a good rocket motor burn, the mission went beyond the 50-mile altitude target. Learn more about our tech onboard: https://t.co/CnVFu1eSQz https://t.co/D1AhE1Uzxm

It should be noted that Virgin is using one measure of where space begins — but it's not the only one. Perhaps the most common definition of space is the Karman Line, which is about 62 miles (100 km) above sea level.

"In theory, once this 100 km line is crossed, the atmosphere becomes too thin to provide enough lift for conventional aircraft to maintain flight," the National Oceanic and Atmospheric Administration explains, noting that many international organizations use the Karman Line as their own benchmark. "At this altitude, a conventional plane would need to reach orbital velocity or risk falling back to Earth."

However you measure it, though, the flight represents a triumph for Virgin Galactic — and a stark change from just over four years ago, when the company grabbed headlines for a very different, altogether tragic reason. In October 2014, its spacecraft crashed during a test flight over the Mojave Desert, killing one of the pilots aboard and severely injuring the other.

The National Transportation Safety Board's months-long investigation into the incident ultimately concluded that it was caused by human error — though, as NPR's Geoff Brumfiel reported at the time, "investigators found that SpaceShipTwo's design was also to blame." The believed that the ship should have had better safeguards to protect against such mistakes.

Even After SpaceShipTwo Crash, Many Space Tourists Hold On To Tickets

So the company went to work on updating the design, ultimately rolling out the ship flown Thursday, which goes by the name VSS Unity. Earlier this year, the supersonic plane climbed to about 32 miles during its third-ever rocket-powered flight.

"I've been so proud of the [Virgin Galactic] team, how they've responded to [the tragedy] and really moved forward with a sense of urgency," Virgin Galactic CEO George Whitesides told CNN Business two weeks ago.

Unlike other rockets launched by NASA, Virgin's spacecraft does not make a vertical launch from a pad on the ground. Instead, it is carried into the sky by another, larger plane, which then detaches the craft and drops it like a bomb. Then, the VSS Unity activates its rockets to push itself even faster, turning upward at the same time.

Thursday's test flight "saw a 60 second planned rocket motor burn which propelled VSS Unity to almost three times the speed of sound and to an apogee of 51.4 miles," the company explained in its news release. "As VSS Unity coasted upwards through the black sky and into space, Virgin Galactic Mission Control confirmed the news and congratulated the two astronaut pilots: 'Unity, Welcome to Space.' "

The successful spaceflight is something of a coup for Virgin Galactic, which has been competing with other commercial space ventures — Elon Musk's SpaceX and Jeff Bezos' Blue Origin among them — in what is increasingly becoming a crowded field. While SpaceX has had some high-profile launches of its own lately, Virgin Galactic says Thursday's flight marks "the very first time that a crewed vehicle built for commercial, passenger service, has reached space."

The development also likely comes as welcome news to the prospective space tourists who have already invested heavily in tickets aboard the first official flights, whenever they get off the ground. The price for a single ticket runs up to a quarter of a million dollars.