Accessibility links
Cardinal George Pell Reportedly Convicted Of Sex Abuse Amid Gag Order In Australia "The person was found guilty in the Victorian County Court but a suppression order was put in place to prevent the publication of details," a prominent Australian news site reported. 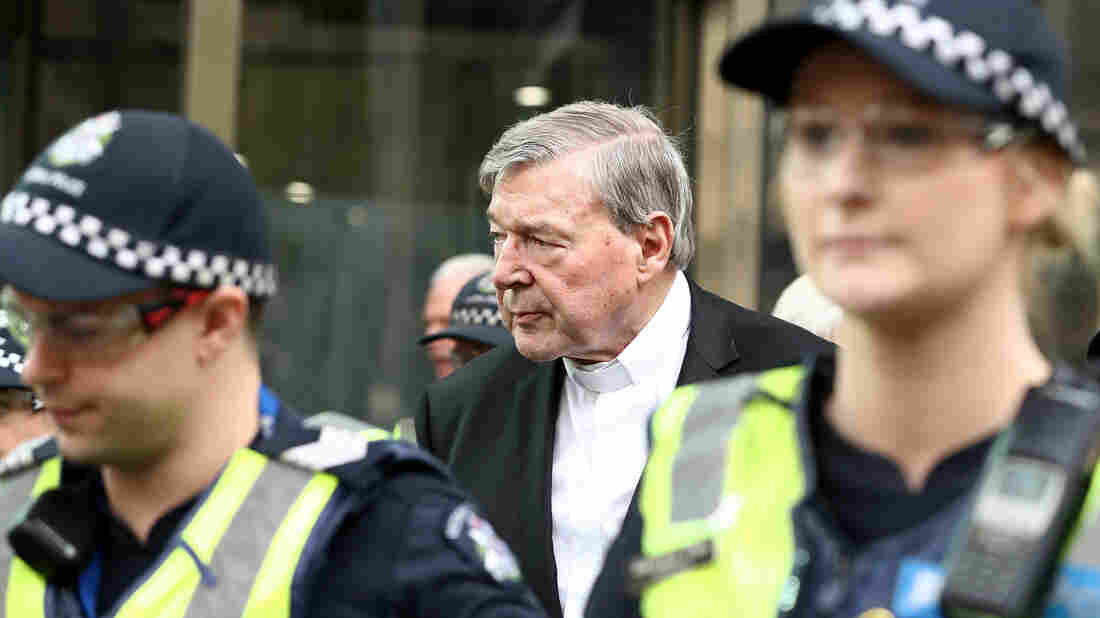 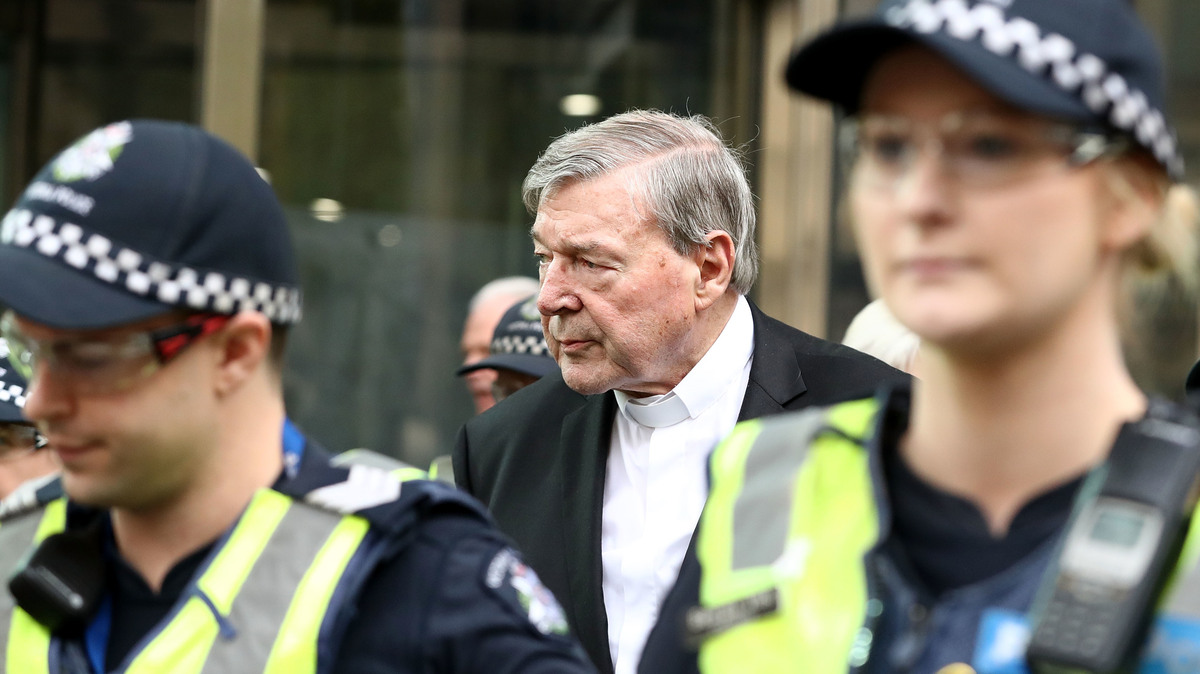 Cardinal George Pell, shown leaving court in Melbourne in May, was reportedly found guilty of sexual abuse, but Australian media are barred from reporting the news.

Australian news outlets are grappling with how to handle one of the country's biggest news stories of the year — even though a judge has barred them from reporting the details. The story revolves around Cardinal George Pell, a Vatican insider who was reportedly convicted of sexually abusing minors this week, and public interest in the case has been intense.

A jury in the County Court of Victoria in Melbourne where Pell, 77, was once archbishop, is said to have found the cardinal guilty of "five charges of 'historical child sexual offenses' that go back decades," according to the Jesuit magazine America. Both that outlet and the Catholic News Agency say they have confirmed the initial report of Pell's conviction that was published by the Daily Beast. All of the outlets are citing sources who either have knowledge of the case or are "close to the cardinal."

Australian journalists have been forced to either ignore reports of a verdict or refer to it in only the broadest terms. News Corp Australia, which owns a number of print and online outlets in the country, has said it will challenge the court's suppression order.

Pell would be the most senior member of the Catholic Church to be found guilty of criminal charges in its ongoing sexual abuse scandal. On Wednesday, the Vatican announced that Pope Francis had removed him from the Council of Cardinals, a group of nine aides that is sometimes referred to as the "C9."

Pell's removal from the papal advisory council was announced one day after initial reports of his guilt emerged — but the Vatican says the pope had written to Pell and another embattled cardinal in October to inform them of his decision.

Pell reportedly will be sentenced in February, although he could also appeal a guilty verdict to a higher court.

Australian media have largely abided by Judge Peter Kidd's suppression order, which reportedly states that publicizing the trial could jeopardize the integrity of other legal actions against Pell.

In a story that was taken down after being published (but is still available in archived form), News Corp's site news.com.au wrote that a "high-profile Australian known across the world has been convicted of a serious crime but the details are unable to be published by any media in the country."

"The person was found guilty in the Victorian County Court but a suppression order was put in place to prevent the publication of details of the person's name or the charges. This is because the person is due to face court again for a separate trial in March and publication of the conviction might prejudice the case."

On its website, the County Court of the State of Victoria in Melbourne states, "There is always a presumption in favor of an open and transparent court. Sometimes, however, the interests of justice require certain information not be published or disclosed."

News.com.au acknowledged that while suppression orders are common, "the person's high-profile status has meant international publications are already reporting on the case and details have been released on social media."

The early phases of Pell's case sparked widespread coverage in Australia and around the world. He left Rome to return to his native country last year to face the accusations against him — charges that he has denied.

The Victoria court's suppression order in the Pell case has triggered debate over laws that allow Australian courts to impose near-total bans on media coverage of trials. In Australia, "there are more than 200 pieces of legislation granting powers to courts and tribunals to make suppression orders," the journal of the Communications and Media Law Association reported in 2014.

Suppression orders can be imposed for a variety of reasons, from concern for victims and/or witnesses to the preservation of security secrets and the desire to protect the public from indecency, according to CAMLA. Judges also issue them in cases where a defendant will likely face another trial, as is the case with Pell.

The group's journal also noted that Victoria's courts seem to have imposed the restrictions more than any other state, citing a study that "found that 1,501 suppression orders were made by Victorian courts from 2008 to 2012."

Suppression order or no, reports that there has been a Pell verdict triggered a spike in tweets and searches in Australia, according to The Age newspaper — which adds that it also fielded questions from readers "asking why we were not reporting this major issue in the public interest."

"We, like all media organisations, are required by law to adhere to suppression orders and breaching such a suppression order is taken very seriously by the court, and could lead to charges of contempt of court," the newspaper said.

Citing a yearlong review of Victoria's court system, the Age says retired Judge Frank Vincent said suppression orders cannot effectively clamp down on the news in an era of blogs and social media. To think otherwise is "most likely to represent wishful thinking than reality," he is quoted as writing.

As newspapers attacked the suppression in editorials, reporter Louise Milligan — who has written a book about Pell — said via Twitter, "The erosion of open courts principle in Vic has troubled me for years. But never more so, more personally and painfully than now. You either believe in open justice or you do not."

In an apparent attempt to acknowledge the Pell story without violating the court's instructions, Australia's Daily Telegraph (which is also owned by News Corp) created a front page that declared: "An awful crime. The person is guilty. You may have read the story online already. Yet we can't publish it. But trust us ... It's the Nation's Biggest Story."

Beneath that eye-catching layout, the paper published an editorial in which it noted that many of its readers may have already seen headlines about the case online, from websites that are not under the jurisdiction of Australia's court system:

"It would therefore be bizarre to publish today's newspaper without raising what we think is an archaic curb on freedom of the press in the current digitally connected world."

Screenshots of that page are still available online — although several tweets from Telegraph employees who posted images of the cover have been deleted.

Calling for legal reform around the courts' gag rules, the Telegraph editorial continued, "We believe you have the right to know this story now and without any further delay."

Saying it is challenging the ban, the Telegraph added, "If we're successful then you'll be the first to know."