Accessibility links
Larry Nassar Is Behind Bars, But Work Continues For His Survivors : Believed In the end, Larry Nassar's survivors were believed. But is that enough? 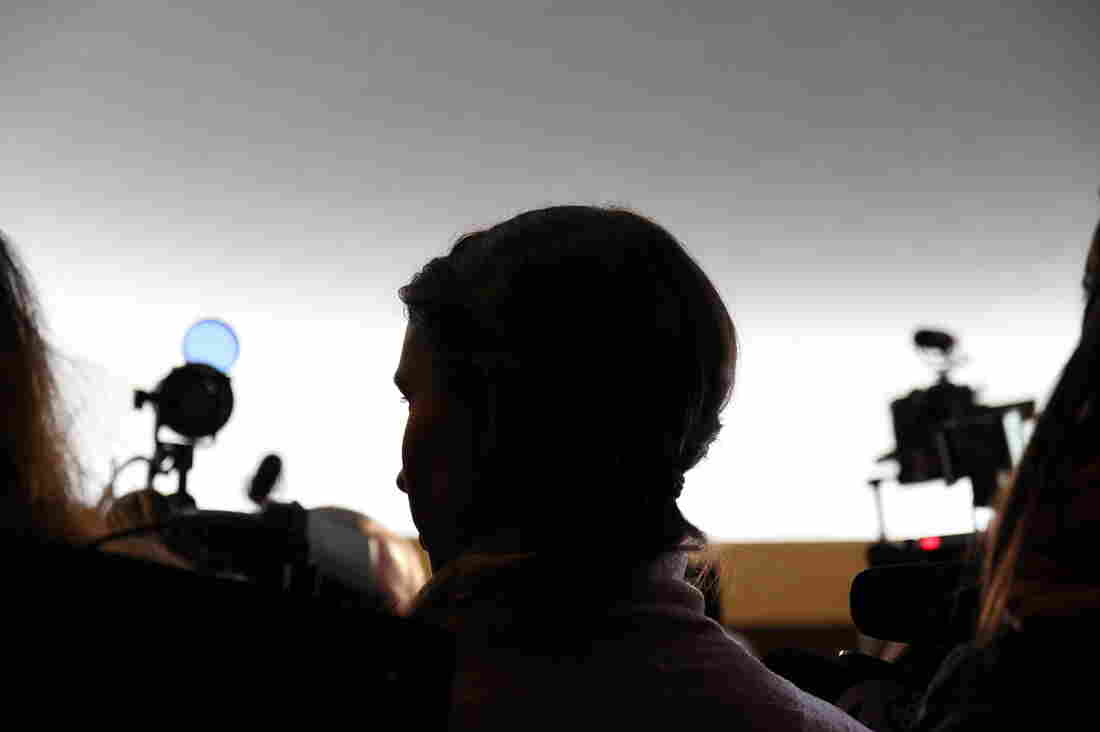 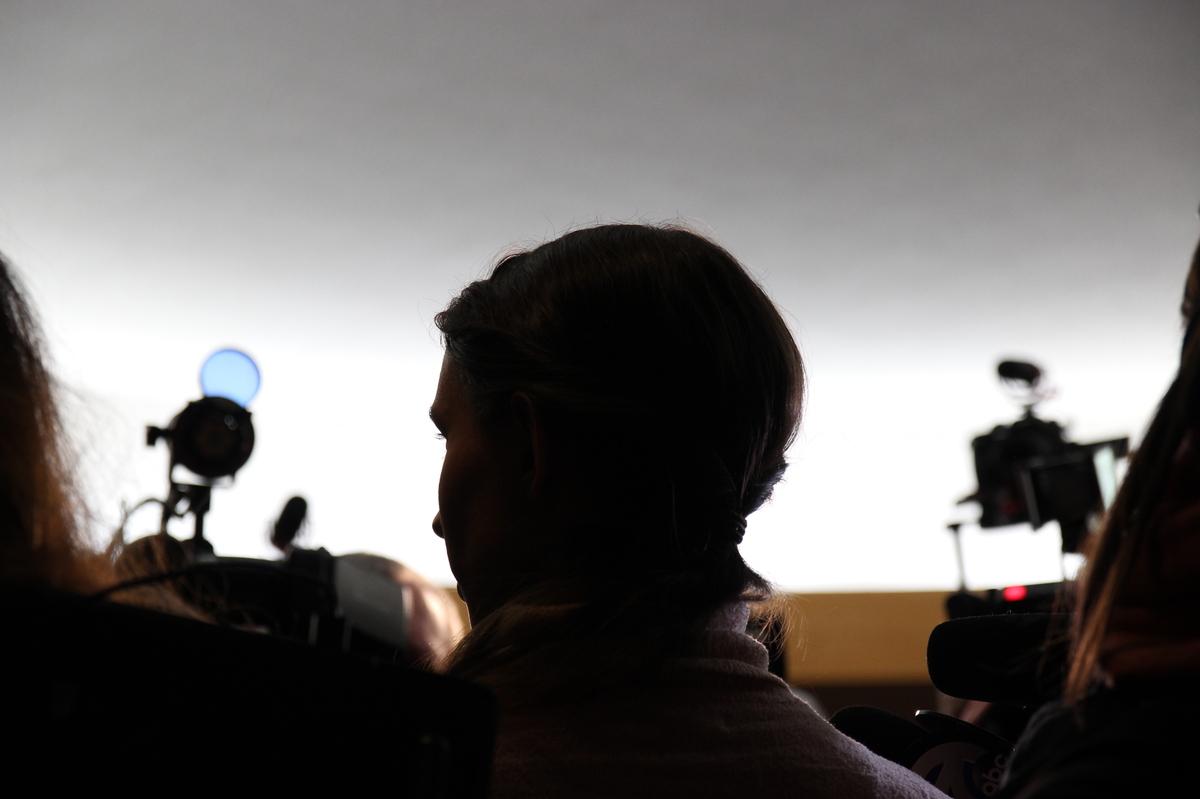 It might feel like after Larry Nassar's sentencing, the story was over. The bad guy went to jail. Survivors were believed. All was well in the world.

But real life is so much messier than that. There are no pretty bows to tie up this story.

For the women you've met throughout this podcast, their lives have drastically changed.

On one level, these survivors are getting all these accolades for their bravery. Glossy magazine spreads. TV awards shows. And they appreciate that, definitely.

But it's one thing for people to say, "I believe you were sexually assaulted."

It's another to get accountability. For people to fully comprehend that the Larry Nassar case is not just about one bad guy, and that he didn't operate in a vacuum.

Now, these survivors have become activists, to teach us how people like Larry Nassar get away with abuse.

One of the survivors working to make sure we learn something from the Larry Nassar case is Kaylee Lorincz. You met Kaylee in Episode 6. She's 19, 4 feet, 11 inches tall. Used to be kind of shy.

In a high-profile moment this past spring, Kaylee tangled with the interim president of Michigan State University. This was at an MSU Board of Trustees meeting, before the school settled with the Nassar survivors for $500 million.

Speaking to trustees, with the school's interim president John Engler at the table, Kaylee recounted a private conversation she and her mother, Lisa, had with him.

"I told him how much I loved MSU, and how I wanted to help them heal. To make real change. He told me all the new things they're implementing, which sounded promising, but said working together couldn't occur until the civil suits are settled," Kaylee said. "Mr. Engler then looked directly at me and asked, 'Right now, if I wrote you a check for $250,000 would you take it?' When I explained that it's not about the money for me and that I just want to help, he said, 'Well, give me a number.' " 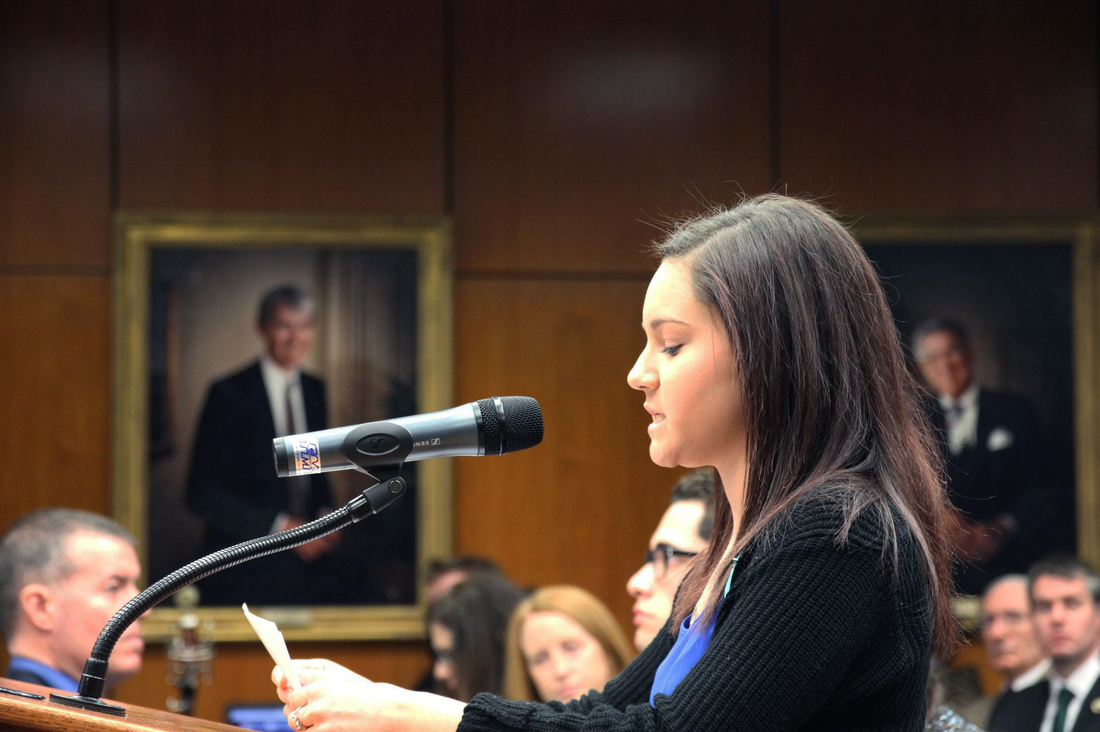 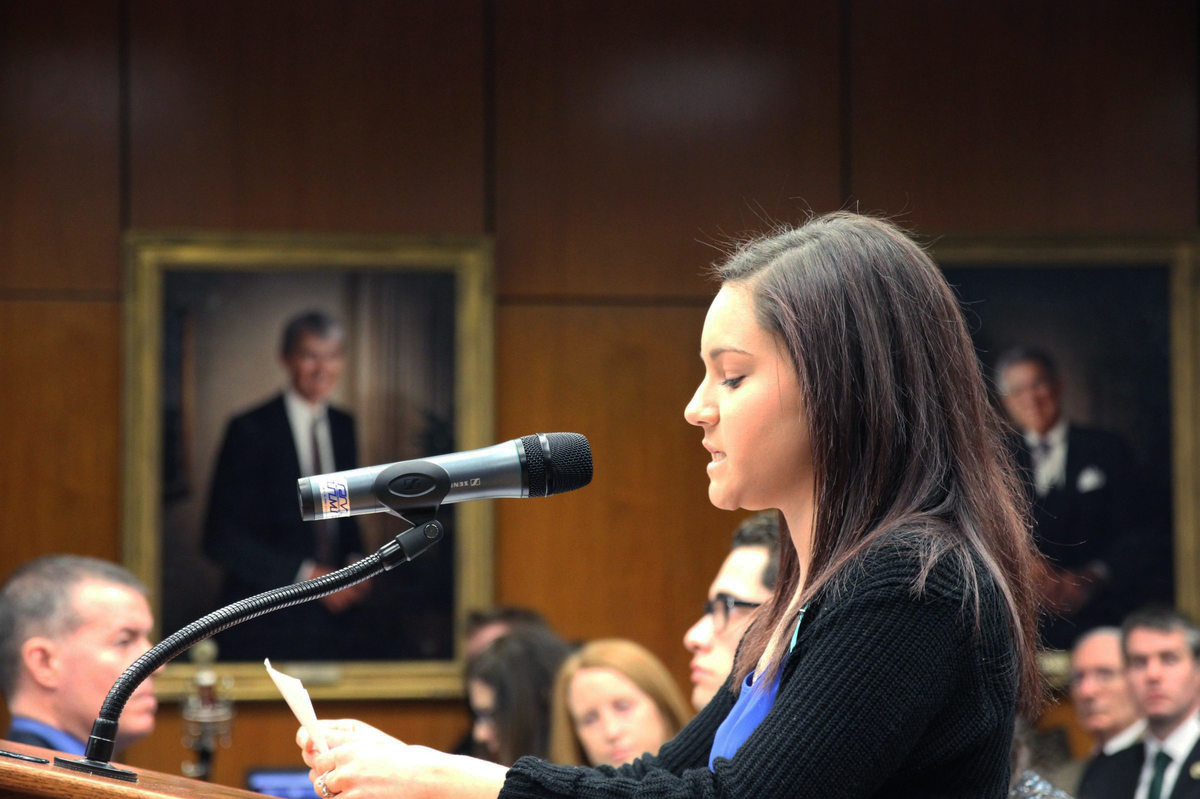 Kaylee Lorincz spoke at an MSU Board of Trustees meeting in April 2018.

Strampel was arrested in March. He's been charged with willful neglect of duty because of the way he handled the 2014 complaint against Larry Nassar. He's also charged with sexually harassing female students himself.

Engler did not respond to Kaylee's statement. Instead, he told her she'd exceeded the three minutes she was allowed to speak.

"Kaylee, your time is up," Engler interjected, as the room erupted in shouting and chants of "Let her speak!"

Later, Engler released a statement about that private meeting with Kaylee and her mom. He said he had a different memory and interpretation of what happened. He said he was sorry for anything he said that was misunderstood.

This is what real, day-to-day life looks like for women like Kaylee. It's not always quite this dramatic, but you get the idea.

These survivors are finding that just because people believe them now, doesn't mean institutions will be any more transparent, or that attitudes will change.

Some survivors, like Brianne Randall-Gay, have basically put their normal jobs and lives on hold.

You heard Brianne's story in Episode 2. She's the one who went to Meridian Township police in 2004, and was told she was not sexually assaulted.

After the Nassar scandal broke, the police department apologized to Brianne and even asked for her help. So over the past year, she's been traveling from her home in Seattle back to Michigan — to work on abuse awareness and prevention with the very same police department that botched her case.

At a recent meeting, Brianne gave a PowerPoint presentation to the Meridian Township police chief, some local school superintendents, and rows of mostly empty seats; only one or two people from the public came out to the meeting.

Afterward, she was exhausted. Just wanted to go outside and eat her lunch. But first, she gave interviews to the local TV stations covering the meeting.

This is part of life for Brianne and several other survivors now, too. They feel like they've got this fleeting moment where people know about the Nassar case and are willing to listen.

But it means performing their experience over and over again, for every speech they're asked to give and every panel they're invited to attend and every interview request.

The thing is, people want your suffering to be just bad enough that it's good TV, but neat enough that it fits into a sound bite.

And there's something surreal about the whole thing.

I feel like ... I have to take what's happened to me and turn it around in a positive way and spread awareness and, you know, always be in a good mood.

Brianne wants to do this work. She wants to be nice, and understanding, and forgiving. She's glad the town is finally doing an independent investigation into what went so wrong with her case.

But some days, Brianne is still angry.

"And I think a lot of people feel like, 'OK, you should be over it at this point. It's been long enough, you've got what you wanted.' ...

"It feels like I just have to be on all the time. Like I have to take what's happened to me and turn it around in a positive way and spread awareness and, you know, always be in a good mood. And always have the energy to do everything, and that's just not possible. I feel like we've all been trying. Trying to make that image, and it's a struggle."

Brianne thinks about her baby boy, who just celebrated his first birthday.

When Brianne gave her victim impact statement at Larry Nassar's sentencing last winter, her son was just 7 weeks old. It breaks her heart that her earliest memories of his life will always be so tied up in this horror show.

But it motivates Brianne to keep slogging away. She says something that sounds like a cliché, but we hear it from so many survivors and their families: If any of this can save one child from abuse, it's worth it.

And that means for some of these survivors, the fight never ends.

For Rachael Denhollander, fighting for change means being on the road.

She's given commencement speeches. She spoke at Harvard. And she spends some of her time speaking to the community that means the most to her: her church community.

Rachael and her husband are Reformed Baptists, but Rachael's message is nondenominational.

Last May, on a warm, sunny evening, she visited New City Fellowship in Grand Rapids, Mich.

She wants people to be radically honest about abuse. To be willing to have difficult, uncomfortable conversations in their own communities. The kinds of conversations that can put relationships or jobs at risk.

Don't just focus on the parts of her story that feel nice, she says. Like how she offered Larry Nassar forgiveness at his sentencing.

"I found it very interesting that when I gave my victim impact statement, I delved deeply into the idea of God's wrath and the pursuit of justice," she told the congregation. "In fact, at that point I had dedicated a year and a half of solid, daily effort in the pursuit of justice at great personal cost to myself and my family. And yet, every single evangelical outlet that published or commented on any part of my statement discussed how Godly it was to offer forgiveness, but not one that I saw discussed how Godly it was to pursue justice."

She told this congregation: God calls on you, as Christians, to speak up for the defenseless. To not hide or bury sexual abuse. To support victims who come forward.

After the speech, Rachael stood at the front of the church, greeting people, one at a time. There was a line all the way to the back of the church.

And this eight-months-pregnant superstar of a woman stood there for more than an hour. Shaking hands, hugging fellow survivors, listening patiently as people thanked her and shared their own stories of abuse or their own despair.

Rachael's mom, Camille Moxin, sat nearby, watching her daughter. Camille said that at this point in this whole ordeal, things are a little easier — but then she stopped herself.

She thought for a moment.

"Yeah, I don't know what that word would be because easier is not it.

And at the end of the day, that's what these women and girls want. For some part of this to be used for good.