Accessibility links
Iranians Are Converting To Evangelical Christianity In Turkey Changing faith from Islam to Christianity is not allowed in Iran, but more and more Iranians in Turkey are going to church. 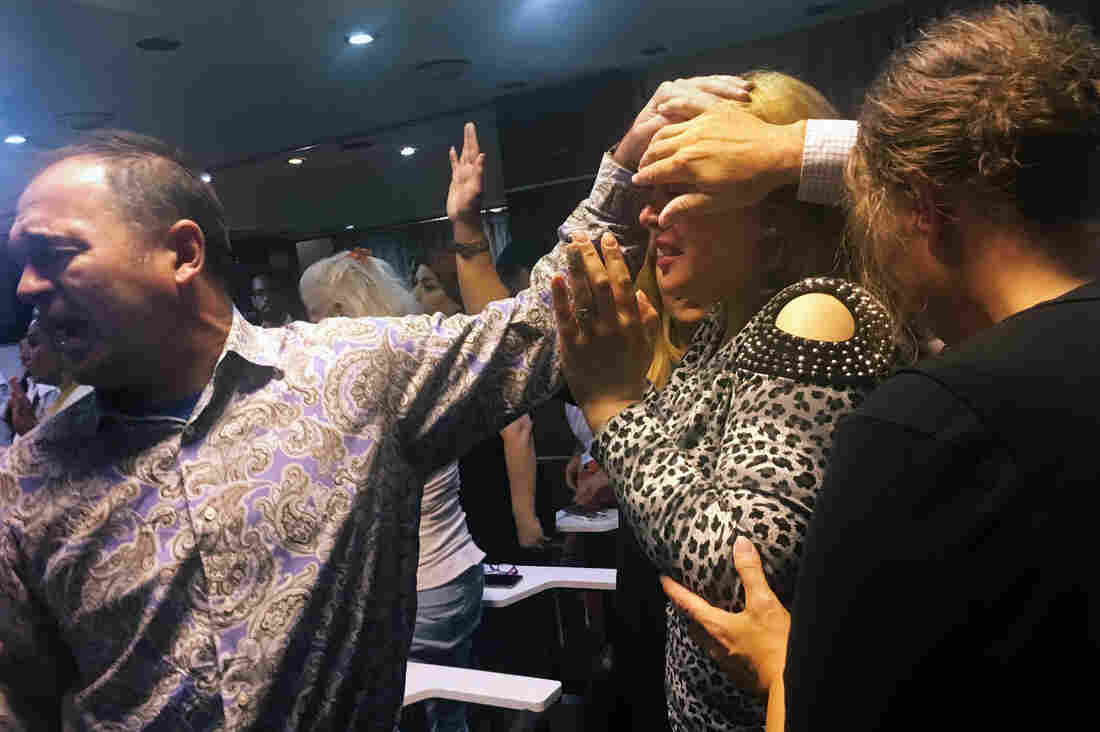 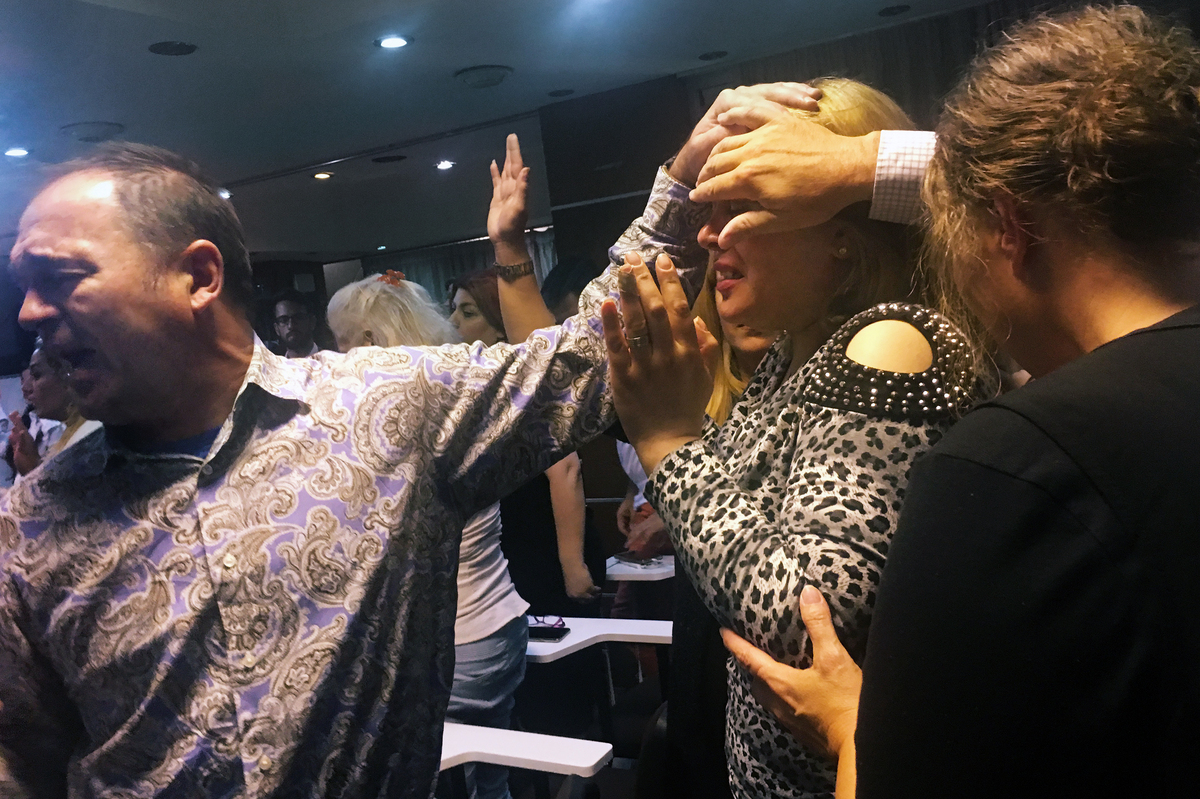 Pastor Karl Vickery prays for the Iranian refugee converts in a makeshift church for the United Pentecostal congregation in Denizli, Turkey.

In a hotel conference room in Denizli, Turkey, about 60 Iranians sing along to songs praising Jesus mixed with Iranian pop music. When the music stops, American pastor Karl Vickery preaches with the help of a Persian translator.

"I'm not famous or rich. But I know Jesus. I have Jesus," he says, with a Southern drawl. The Farsi-speaking Christian converts shout "Hallelujah!" and clap.

Vickery, who's part of a visiting delegation from Beaumont, Texas, then offers to pray for each person in the room.

Women with hair dyed blond and short skirts and clean-shaven men in slacks stand up to pray in unison. Vickery puts his hand on one woman's head and speaks in tongues. One man closes his eyes as tears fall. Another woman raises her hand and shouts "Isa," Jesus' name in Arabic and Persian. The room smells of sweat.

Among the parishioners are Farzana, a 37-year-old hairdresser from Tehran, and her daughter Andya, 3, who runs around, taking photos with her mother's cellphone.

"It feels good. Our relationship to God becomes closer," Farzana says. She doesn't want to give her last name because she says her family in Iran might face persecution for her conversion. Her family knows she is a convert and they're scared for their own safety inside Iran.

In Turkey and across the Middle East and Europe, evangelical Christians are converting Muslim refugees eager to emigrate to the West. The refugees in Turkey escaped Iran, where conversion to anything but Islam is illegal.

There are hundreds of thousands of Christians in Iran. Those considered part of the native Christian communities are permitted to practice their religion with restrictions, but a Muslim converting to Christianity is considered an apostate. The Iranian government jails converts, especially those who proselytize. The authorities see it as a Western plan to turn Iranians against Islam and the Islamic regime, according to converts in Turkey.

In Iran Protests, Women Stand Up, Lift Their Hijab, For Their Rights

It is also illegal to convert from Islam in several other Muslim-majority countries, including Saudi Arabia, and punishable by jail time or death.

The converts in Turkey apply for asylum to a third country through the United Nations, claiming they would face religious persecution if they return home. Turkey hosts more than 3.5 million Syrians and other migrants escaping war and conflict.

But Turks are becoming increasingly intolerant of refugees. While the Turkish government allows freedom of religion and even protects churches in many cities, refugees are assigned to live in small conservative towns where they may face discrimination from the local population wary of evangelicals.

Despite local objections, evangelical pastors say they will continue to preach the Bible because Turkey's constitution gives them the right.

Many foreign evangelicals left Turkey after a botched coup attempt in 2016, when American preacher Andrew Brunson was jailed and charged with terrorism. The high-profile case strained Turkish-U.S. relations until Brunson was released in October.

But refugees have continued to come, and demand for more churches has grown.

A small church consisting of 20 to 30 families has become a much bigger congregation housing 80 to 100 people on a regular Sunday.

Sebnem Koser Akcapar, a sociology professor at Istanbul's Koç University who has been studying refugees and their change of faith, says she has witnessed the rise in conversions.

"The numbers of Iranian refugees converting have grown tremendously over the years. A small church consisting of 20 to 30 families has become a much bigger congregation housing 80 to 100 people on a regular Sunday," she says.

Akcapar believes only some of the refugees are genuine converts. Others are using religious persecution as a way to get to the West, which may be the only way for them to lead a normal life, she says.

The United Pentecostal Church in Denizli can't keep up with the demand, says the church's Turkey representative Rick Robinson, who has lived in the country for 13 years. It has churches in eight Turkish cities and refugees are calling on them to open more.

He says the church provides a spiritual outlet for refugees, not financial support, and that he welcomes anyone regardless of whether they are genuinely converting or not.

Robinson thinks many of the congregants may not be believers, at least not at first. "There might even be some who start with the help just for the refugee status and become sincere," he says matter-of-factly.

Robinson, a tall pastor with silver hair, welcomes the Iranians into the church with hugs and laughter.

Farzana says one reason she converted was the way Iran's interpretation of Islam treats women. When she divorced an abusive husband, she says, an Iranian court granted him custody of her older son and daughter. Under Iran's Sharia Islamic law, fathers get custody of older children.

"Mostly because of this I became disillusioned with Islam," she says. "That judge sitting there and giving orders was completely siding with men. Everywhere in Iran men come before women."

Farzana says she was shattered and felt lost after her children were taken away.

But a year later, Farzana married her current Iranian husband and they had Andya. She hired a high school friend to assist her in her thriving beauty salon, and soon her friend, a Christian convert, began to recruit her to Tehran's secret churches.

"Once she began trusting me, she gave me photocopied writings and said, 'I'm giving these to you as a gift. Go read them. These are the word of God,'" Farzana recalls.

Christian groups report that secret home churches are growing in Iran and one reason, says an award-winning Iranian athlete who converted to Christianity, is to rebel against the Islamic regime.

"The system of authority in Iran has put Iranians under a lot of pressure, and they don't see any hope. They are in search of God, but they want to find another path because they're discontent with the options they've been given," says the athlete, who is part of the Denizli congregation. He didn't feel safe sharing his name. 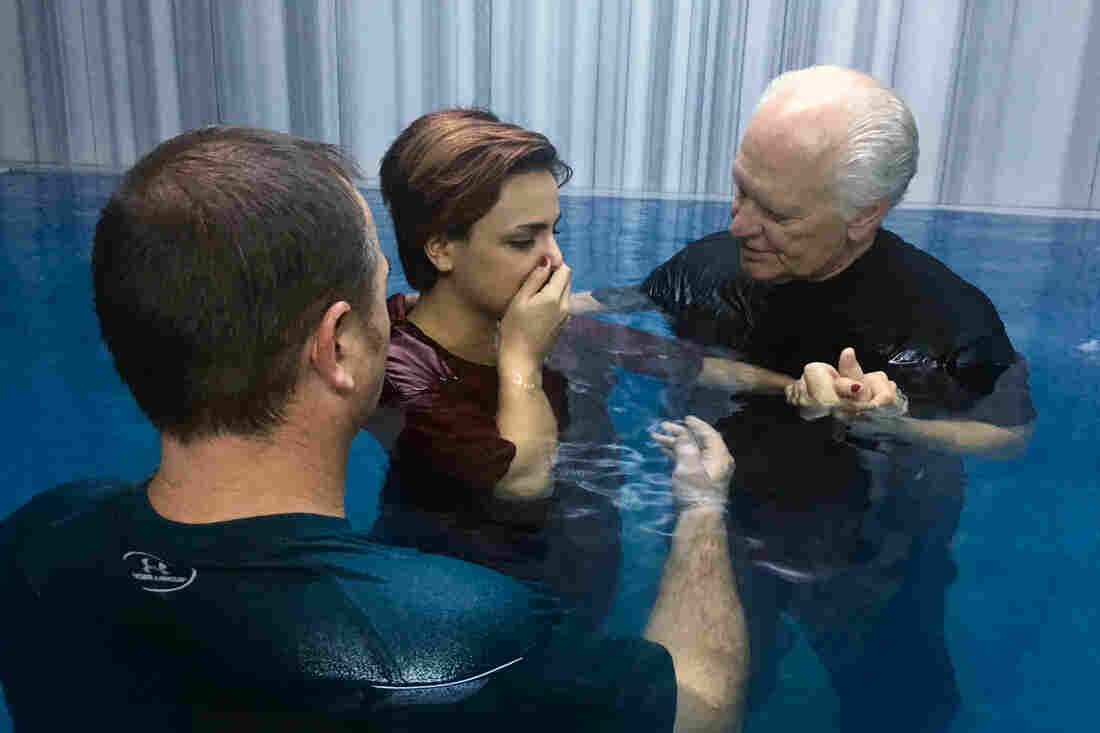 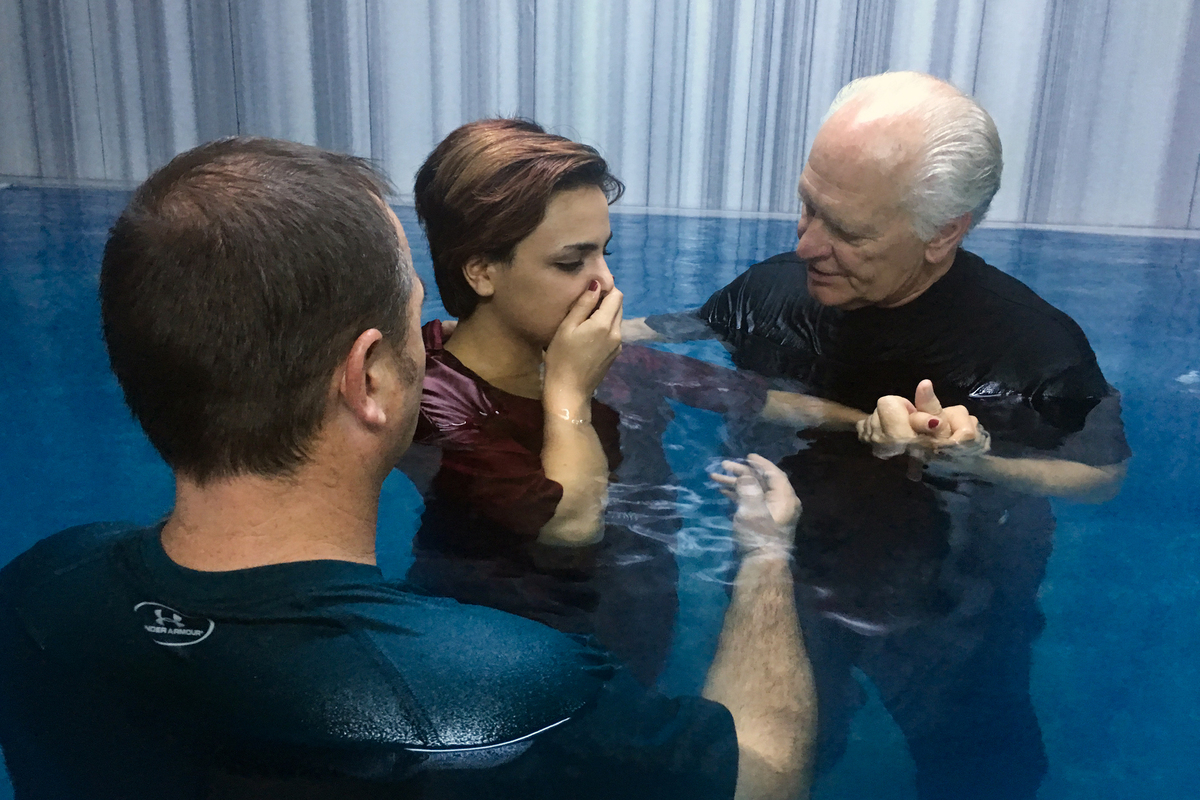 Many of the Iranians in Turkey say they converted in Iran and had to flee. Farzana says after three months of attending a home church, two men from the Revolutionary Guards who were watching her church detained her when they found a Bible in her car.

"The interrogator sat in front of me ... he said you're an apostate, you're not ashamed of that. You're creating problems in the country. I got scared and began to cry," she says.

Farzana says she was released after her husband signed a form that she wouldn't return to church. But her church advised her to leave Iran. A smuggler helped her family escape to Turkey, where they settled in Denizli, a city of 600,000 in southwest of the country. Farzana got a job at a Turkish beauty salon, found the Pentecostal church and applied for asylum, waiting to resettle in the West.

But the odds are against resettlement.

Selin Unal, the spokeswoman for the United Nations refugee agency in Turkey, wrote in an email that the U.N. doesn't aggregate the number of religious persecution cases filed. They just process the most vulnerable, and only a handful of Iranians have resettled in the U.S. this year.

Other aid workers involved with refugees say religious persecution cases among converts have become so common that the U.N. has become distrustful.

Lanna Walsh, a spokeswoman for the U.N. International Organization for Migration, urges refugees to be honest on their asylum applications.

"If during the process, inconsistencies or inaccuracies in their stories are uncovered, then their case and application actually may be deemed inadmissible and they may not get another chance to apply," Walsh says.

Anti-immigration policies sweeping the West also crush refugee hopes. President Trump and Vice President Pence said during their presidential campaign in 2016 they would allow Christian refugees to immigrate to the United States. Instead, Trump enforced a travel ban against citizens of seven Muslim countries, including Iran. The U.S. even denied entry to a group of native Iranian Christians in limbo in Austria, who had applied under a law that gives religious minorities the right to asylum. Those Iranians are suing the U.S.

Pastor Robinson backs Trump's refugee policy. He says Turkey should allow Iranian refugees to live and work here. That way, Iranians can be closer to their families in Iran because the two countries share a border.

"I can tell you what I tell a lot of our people here. If you can make a life in this country, and it's not a bad country ... the chances of you seeing your family every year are almost guaranteed," he says.

Yet refugees are only allowed to work in Turkey if a Turkish employer sponsors them, and that's rare. Most have under-the-table jobs earning half of what Turks do. They also face a backlash from local communities, especially if they're Christian converts.

For Syrian Refugees In Turkey, A Long Road To Regular Employment

Some Turks in Denizli complain that refugees are taking their jobs. One shop owner hung a banner that says "No Syrians, Iranians and Afghans are allowed in this shop."

Yasin Sarikaya, a Turkish cab driver in Denizli, is dismayed at the visible number of refugees working and living in his neighborhood. When he realizes that some of them are Muslims converting to Christianity, he becomes visibly upset.

"It's a mistake to know Islam and what a widespread and pleasant religion it is, and then change to another religion," Sarikaya says.

Many of the congregants say they have faced workplace discrimination. Farzana says her Turkish boss at the salon gave her cleaning work and refused to let her take a break after she shared that she was a convert.

"Before she found out I was a Christian, her interaction was different. It was much better," she says.

Farzana eventually quit and is looking for another job.

Despite the challenges, the Iranians say the church is a place to release their sorrows and feel part of a community. But the church keeps its location and activities a secret for safety reasons. Some churches in Turkey request protection from local police.

For converts to prove they're Christian for the asylum process, they have to get baptized. On a recent Friday, the pastors enter a swimming pool inside a Turkish bathhouse and help parishioners dressed in colorful robes dunk their head under the water. Behind a clear glass in the adjacent room, a half-naked man gets a rubdown from a bathhouse attendant.

Sabah Allahvardi, a 22-year-old university student, is excited about her baptism. She moved to Turkey six months ago. She and nine others exit the pool beaming and dripping wet. They will receive a certificate that documents their change of faith with hopes that they can live in a country with freedom and acceptance.

"I never thought this would happen to me in Iran, but now I'm really happy because my life is changing," Allahvardi says shyly.