Accessibility links
Lin-Manuel Miranda On 'Mary Poppins Returns' And Writing His Way Onstage Though best-known for his auteur work, the mastermind of Hamilton and In the Heights says it was his dream to be offered a part in someone else's musical. 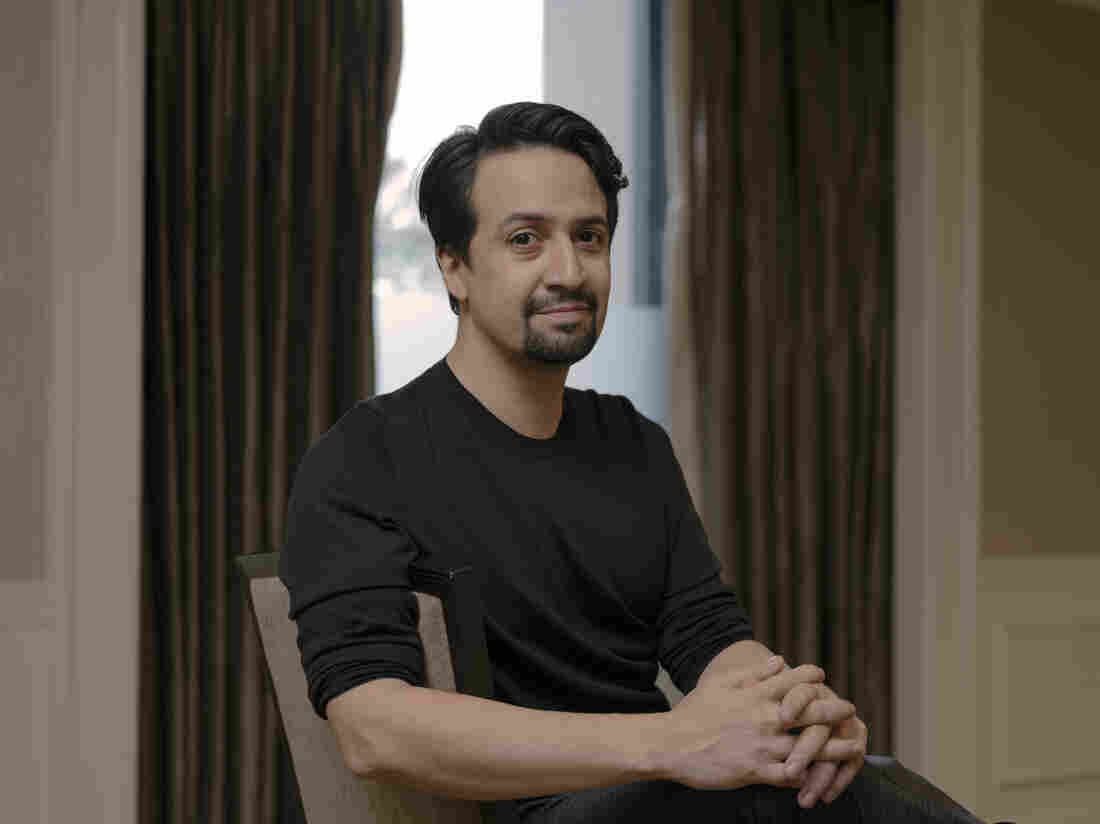 Though he is best-known for his auteur work, composer, playwright and actor Lin-Manuel Miranda says it was his dream to be offered a part in someone else's musical. Elias Williams for NPR hide caption 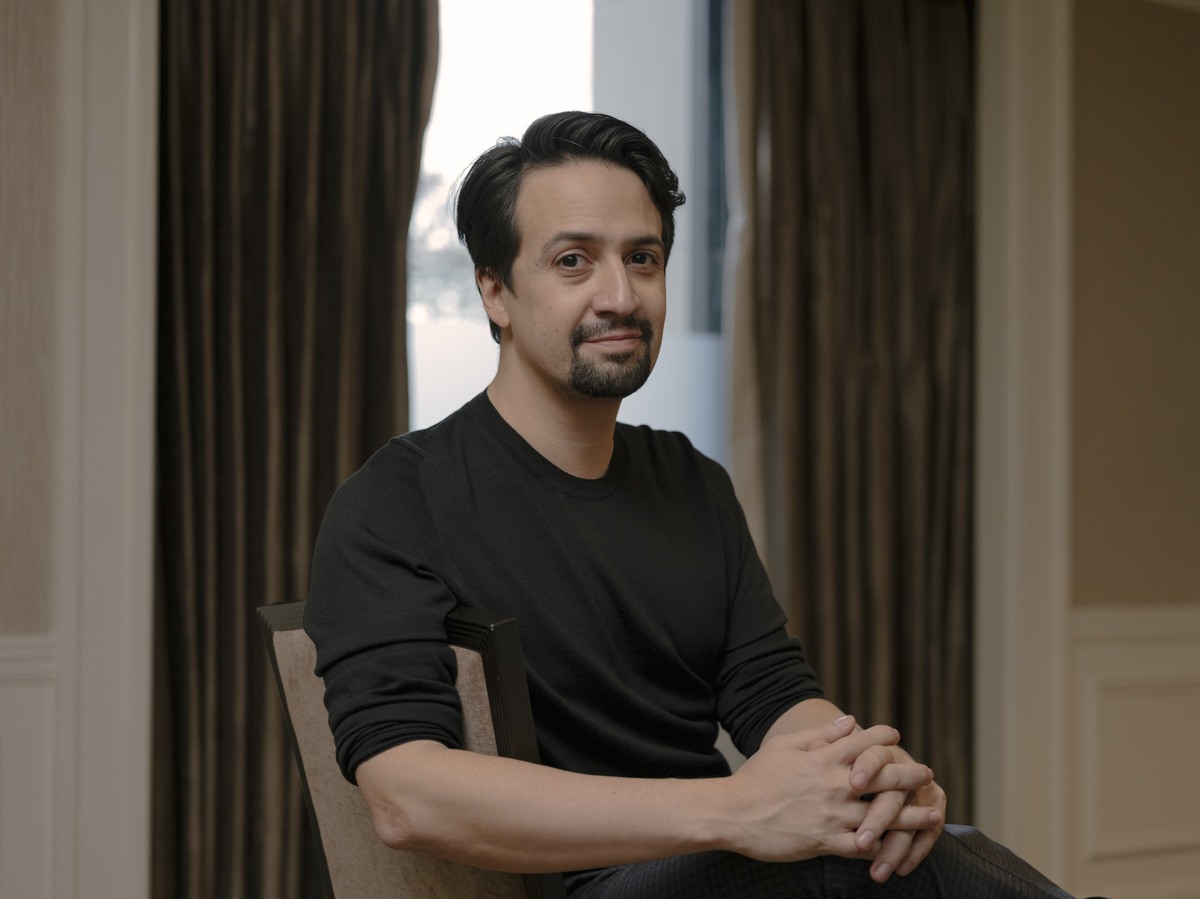 Though he is best-known for his auteur work, composer, playwright and actor Lin-Manuel Miranda says it was his dream to be offered a part in someone else's musical.

Create and star in a blockbuster hip-hop musical, and you get to do pretty much anything you want. For Lin-Manuel Miranda, the playwright and composer behind Hamilton and In the Heights, that means starring in the sequel to a hallowed Disney classic.

In Mary Poppins Returns, Miranda takes on the role of Jack the lamplighter — an apprentice to Bert, the character immortalized by Dick Van Dyke in the original 1964 film. Though he is best-known for his auteur work, Miranda says it was his dream to be offered a part in someone else's musical.

"It's the fruit of the harvest," Miranda says. "I started writing musicals because I desperately wanted a life in musical theater. I don't have the ballet chops to pull off Paul in A Chorus Line or Bernardo [in West Side Story] — and if you're a Puerto Rican dude, that's what you get in the canon."

Miranda spoke with NPR's Audie Cornish about finding his place in a new Mary Poppins universe and why the involvement of director Rob Marshall is the No. 1 reason he said yes to the role. Hear the radio version at the audio link and read on for an edited transcript.

Audie Cornish: I was reading that your favorite song from the original Mary Poppins movie — maybe not favorite, maybe you have a mixed relationship with it — is "Feed the Birds."

Lin-Manuel Miranda: [Laughing] "Openly hostile" is probably my relationship to it as a child.

I mean, that's a little strong.

Yeah, no. I just found it so sad. The notion of this bird lady, who cares for these birds and sits on the steps of St. Paul's Cathedral, I couldn't bear it as a child — it was too much for me. And so, I only saw the first two-thirds of the movie many times as a kid: As soon as "Feed the Birds" came on, I would turn it off. Such was VHS technology.

If it has an equivalent in this movie — not so much that I would turn off the movie — there's a beautiful song in our film called "Where the Lost Things Go." Mary Poppins is singing to these children — they've lost their mother the year before. And she sings about it in such a smart Scott Whitman lyric, because it's about loss and it's about grief, but it's also in a way that a child can understand and is not condescending, it doesn't talk down, doesn't baby-talk. It's just really beautiful. If I were a kid at the time, I probably would've fallen apart at it.

Your character offers a kind of path of joy and advice out of that mood. I'm thinking of a song like "Trip a Little Light Fantastic."

That's sort of Jack's MO, is that he sees the light in any situation. He looks for the bright side, the hope, even in a dark time or in a dark place, and it's a lovely sentiment. It's also eight minutes of nonstop dancing. It was one of the last numbers we shot, and we basically spent the entire movie shoot rehearsing for it.

The work shows! At a certain point, you see bike tricks, and maybe parkour? I was like, "Oh my God, this just exploded into a huge Broadway thing."

Totally. And Rob is really the biggest reason I said yes to this, after Hamilton. I wanted to see how one of the best directors of modern musicals does what he does.

After the kind of success that you've had, especially as a young person, how does it affect your aspirations? Do you want to make another big, huge, influential thing? It just feels like an astronaut who has already been to the moon.

You say that like I set out to make a big, huge, influential thing.

But once you have, and you're having brunch with Cher, you have to figure out what to do next. I don't know what's on that list.

It's funny. I think that I'm everywhere and I'm nowhere, right? Because we all still, no matter where we are in life, we struggle with balancing our family and our careers, and the things we want to do with the things we must do. I feel very lucky that I'm pursuing projects I'm passionate about. I don't have to write lyrics for campaign jingles for my dad anymore. I don't have to do anything for the money. And I still know I cannot control the success or failure of a creative endeavor. So I go into these experiences just hoping to learn as much as I can. The rest of it the world does what it does. I take my kid to school in the morning, and try to be a good husband, and a good father and a good son.

And the kids don't care — in a good way.

Right, right. The kids want to make sure that the yogurt they like is in the fridge.