Accessibility links
Florida Executes Inmate As Report Cites 'Continuing Erosion' Of Death Penalty Both executions and death sentences have declined dramatically since their peak in the late 1990s, according to the Death Penalty Information Center. 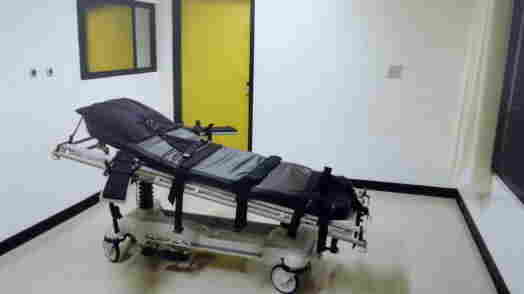 This undated photo shows the death chamber at the Georgia Diagnostic Prison in Jackson, Ga. Public support for the death penalty has declined sharply in the past two decades, according to polls. Erik S. Lesser/Getty Images hide caption

Jimenez was convicted of a 1992 murder; his execution had originally been scheduled for August, but the Supreme Court of Florida issued a stay that was later lifted.

Jimenez' sentence, carried out by lethal injection, comes as a new report describes an ongoing decline of capital punishment in the U.S.

The Death Penalty Information Center released its annual report on Friday. In the past two years, executions have ticked up slightly, but the report says that a broader look at the data reveals the "continuing erosion of the death penalty across the country."

"This is a sustained generational low," said Robert Dunham, executive director of the center, which has been critical of the way capital punishment is carried out. "The last four years combined will have exactly half as many death sentences as the preceding four years."

Both executions and death sentences have declined dramatically since their peak in the late 1990s when hundreds of people a year were being sentenced to death. The report projects 42 people will get death sentences in 2018.

Public opposition to the death penalty has strengthened in recent decades. A Gallup poll conducted in October showed 41 percent of Americans oppose the death penalty for a person convicted of murder, the highest level in nearly a half-century. Poll numbers released in June by the Pew Research Center showed a slight increase in support for the death penalty in the last two years, but confirmed the downward trend.

States Find Other Execution Methods After Difficulties With Lethal Injection

While the punishment is legal in 30 states, the majority of them don't carry out executions. According to Friday's report, only eight states — Texas, Tennessee, Alabama, Florida, Georgia, Nebraska, Ohio and South Dakota — put prisoners to death this year. In October, Washington became the latest state to ban the death penalty after its Supreme Court ruled it had been imposed both arbitrarily and with racial bias.

In an interview with NPR, Elisabeth Semel, director of the Death Penalty Clinic at Berkeley Law school said that despite the fact that executions are up slightly from a 25-year low in 2016, "there's no question that this is a dramatic downward trend." Semel said Americans' support of the death penalty has chilled since it reached a fervor during the "tough on crime" mentality of the 1980s and 90s.

Experts looking to explain the trend also point to exonerations of death row inmates, botched executions and increasing objections by conservatives to the death penalty. In August, Pope Francis approved a revision to Catholic teachings, calling capital punishment "inadmissible because it is an attack on the inviolability and dignity of the person."

As NPR has reported, states have also run into difficulties obtaining some of the drugs used for lethal injections, by far the most common method of execution. Stockpiles have expired and pharmaceutical companies have objected to the use of their products in the procedure. Critics have decried the drawn-out executions botched lethal injections can cause. In November, an inmate in Tennessee was executed by electric chair after his lawyers argued lethal injection would be a longer and more painful process.

Friday's report says that there has been about one exoneration of a prisoner on death row for every nine executions. In 2018, three prisoners awaiting execution had their sentences reduced to life in prison; two prisoners, Vicente Benavides and Clemente Aguirre-Jarquin, were exonerated.