Accessibility links
'The Jungle' Tells The Stories Inside A Real Refugee Camp In Northern France A makeshift city full of refugees is the scene for the new off-Broadway play The Jungle. NPR's Rachel Martin speaks with two of its actors, Ammar Haj Ahmad and Milan Ghobsheh. 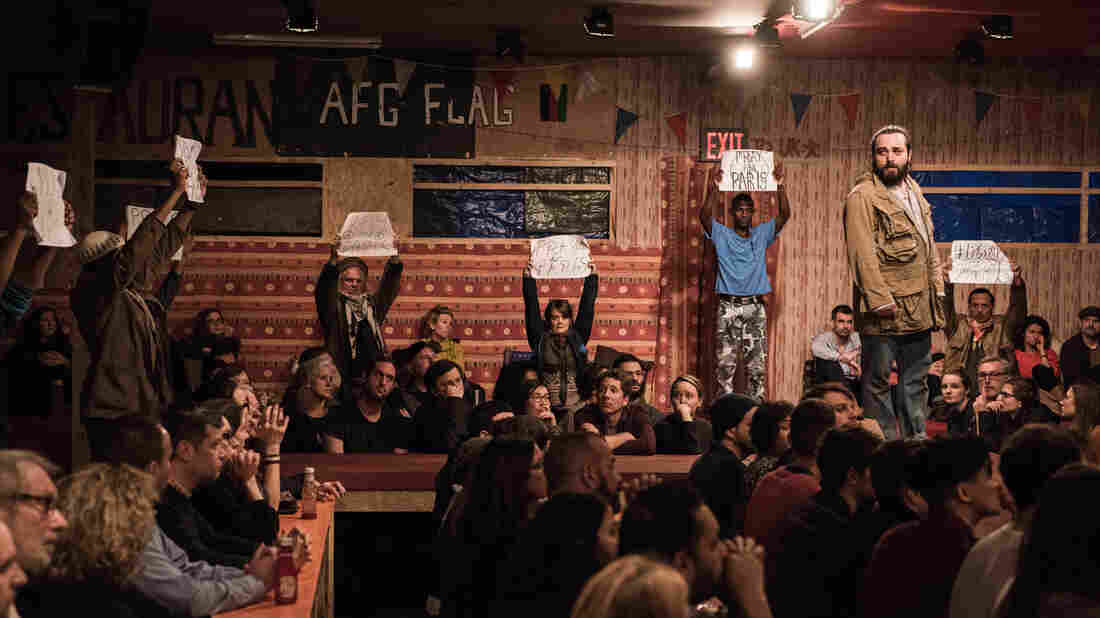 Ammar Haj Ahmad performs as the play's narrator, Safi, in The Jungle.

Ahmad and Ghobsheh herald from predominantly Muslim countries whose residents are barred from coming to the U.S. under President Trump's travel ban. Ahmad is from Syria, Ghobsheh from Iran. Both are members of The Jungle cast, a play that received near-universal critical acclaim when it debuted at the Young Vic theater in London.

After seeing the production, a host of cultural, religious and political figures intervened, writing to U.S. immigration officials, urging them to allow the actors to travel to America. Eventually a waiver was granted.

It recently opened in New York. The production has transformed the St. Ann's Warehouse, a performing arts space that sits beneath the Brooklyn Bridge. The theater has been turned into a bustling Afghan cafe, modeled on a restaurant situated in the heart of a refugee camp. The refugee camp is based on a real camp located on the outskirts of the French city Calais. That camp — which was nicknamed "the jungle" — stood on an old landfill site before its demolition in 2016.

The camp at its peak housed thousands of refugees fleeing war-torn and unstable nations, including Syria, Afghanistan, Eritrea, Somalia and Iraq. A Human Rights Watch report once described conditions at the camp as "like living in hell." But despite the squalor, a bustling multicultural community emerged.

In The Jungle, Ahmad plays the role of the narrator, Safi, in one poignant monologue, he reflects on that diversity. "I could walk from Sudan, through Palestine and Syria, pop into a Pakistani cafe through Oxford Street near Egypt, buy new shoes from the marketplace, Belgian cigarettes from an Iraqi corner shop, through Somalia," he says. He then asks a question that forms a central part of the play: "When does a place become home?" 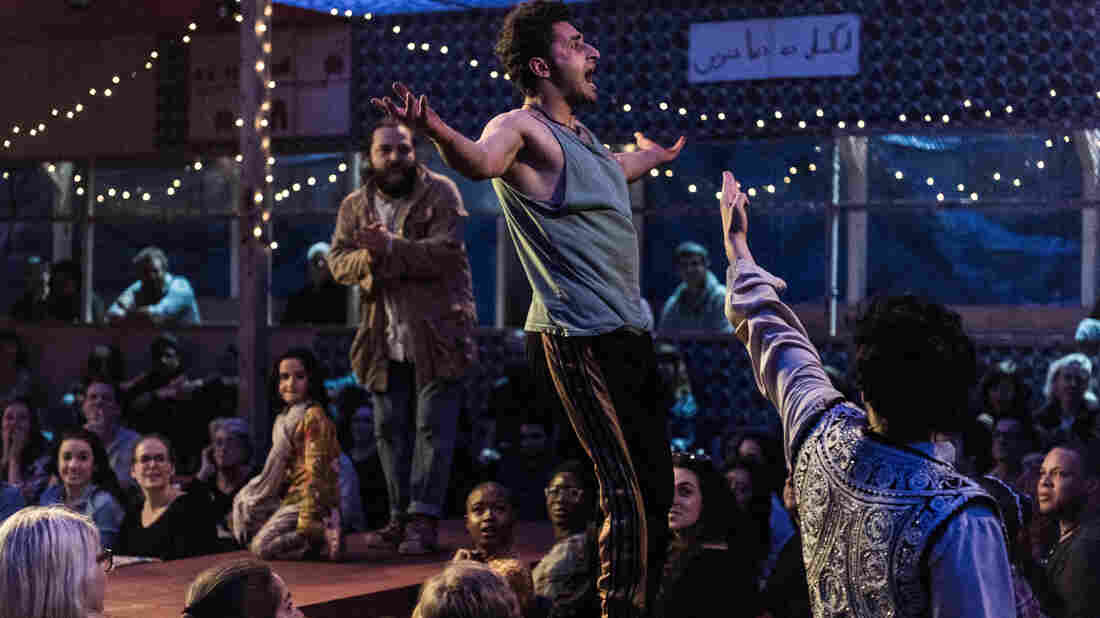 In The Jungle, St. Ann's Warehouse is transformed into an Afghan cafe, serving as the production's backdrop. Teddy Wolf hide caption 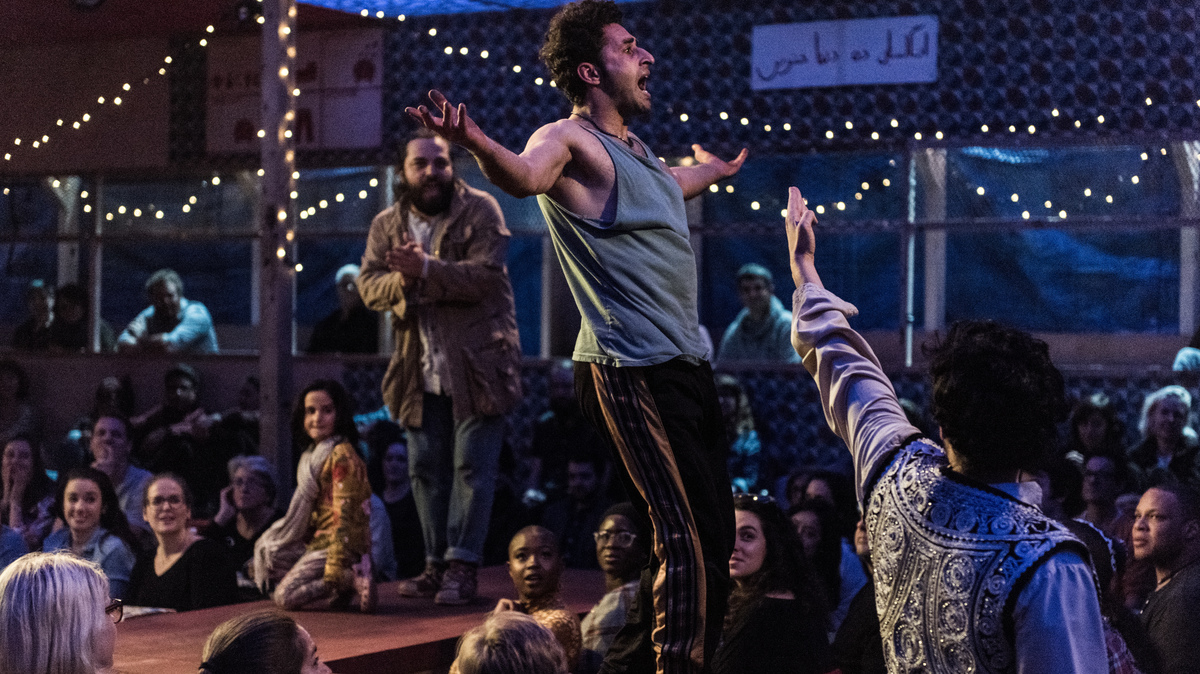 In The Jungle, St. Ann's Warehouse is transformed into an Afghan cafe, serving as the production's backdrop.

For One French Woman, An Eye-Opening Visit To Calais' Refugee 'Jungle'

For Ghobsheh, the jungle refugee camp was his home, though he constantly tried to get out. After fleeing Iran, Ghobsheh lived in the camp for three months as he attempted to reach his intended destination, the United Kingdom. On a clear night, he says, the lights of English coastal cities glistened in the distance, offering hope of a new life abroad. When darkness fell, many of the refugees, including Ghobsheh, risked their lives, hiding away in the back of trucks traveling across the English Channel. "I tried too many times, every day," Ghobsheh tells NPR's Rachel Martin. "I tried to jump in the truck, in a freezer truck. It was very cold and it was 12 hours. I made it."

Ammar describes a harrowing detail involving those hiding in trucks and plastic bags. "The moment that they hear that the truck is slowing down, they put the plastic bag and suffocate themselves because the machines that the border agents use is to catch your breath," he says. "So you hold your breath. And some people died doing that."

A fundamental aspect of the production is exposing the audience to these kind of human stories, ensuring that the public is made aware of what's happening on the beaches of the Mediterranean, along borders and in refugee camps.

When asked what he wants American audiences to take away from this piece of theater, Ahmad reflects. "It's about humans, it's about choosing love. Because at one point here, lots of people came from different parts of the world. If we go back to our grandparents, we will all find stories that in our blood there is fear from someone in the family, who ran away from a place to another," he says. "Metaphorically, we're all refugees in different volumes and different intensities."