Accessibility links
In 'The Dakota Winters,' Finding A New Story To Tell About John Lennon Tom Barbash's new novel is set in the famed Manhattan apartment house where Lennon spent the last year of his life — and where, in this telling, he befriends a washed-up talk show host and his son. 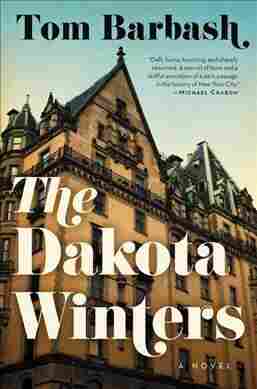 The Dakota Winters isn't a novel set on frozen prairies, but in the rarefied precincts of perhaps the most famous apartment house in New York: the Dakota, on the Upper West Side, the place in which luminaries lived — and one of the brightest, John Lennon, also died, shot to death just outside the entrance.

Tom Barbash's new novel tells the story of Anton Winter, who returns to his parents' apartment in the Dakota in 1980, after a spell in the Peace Corps in Africa — and a spell of malaria. His father, a late-night talk show host named Buddy Winter, has just walked off his show and into a breakdown. Father and son pal around Manhattan, and hob-nob with Kennedys, John and Yoko, and other bold-faced names as Buddy Winter tries to figure a way back into the limelight.

Barbash says he grew up very near the Dakota, "and it was always this great, looming, haunted castle. But I wanted to write about people who were neighbors of John Lennon in the year before his assassination, that was the first conceit. And then I discovered that it was really more about this father and son."

On Lennon's isolation at the time the novel takes place

Both Buddy and John, that's part of their friendship, they call themselves "the Dakota househusbands." This is a period where John and Yoko, they ended up sending a letter to the public, saying "we apologize that we've needed this time apart from you." So yeah, he was concentrating on being a father ... part of the thing that John does for Buddy is he reads the press to him, about Buddy's breakdown. He's very sympathetic to him, and that's something that Anton senses.

On writing a plausible John Lennon

I sort of felt like I needed to have something new to say about John. And I had read a good deal about his last year; there was a book by John's personal assistant, Fred Seaman, that was helpful. There was a book by his tarot card reader. I read memoirs, read his letters.

If I said anything new about John it's that I think this was the beginning of a prolonged second act in John's life that would have been really fruitful.

But my sense, what I wanted to say, was that John's last year was about being a father, and thinking back on his own father, and about going to sea. So John learned how to sail that spring, he bough a sailboat, the Isis, and he sailed out of Cold Spring Harbor, and then he planned this trip through the Bermuda Triangle, from Rhode Island to Bermuda, and along the way, he had a harrowing storm, and the captain, a man named Hank Halsted, turned the boat over to John at one point because everybody else was seasick ... and then supposedly, singing filthy Liverpool shanties at the top of his lungs, John sailed the boat through the Bermuda Triangle in a storm and saved everyone's life. And when he gets to Bermuda, he's had a five-year drought before that, and he writes all of Double Fantasy in about ten days.

On whether or not to foreshadow Lennon's death

I needed another focus, and I needed the book, really, to be about the Winters, and so all of the focus is really on, will Buddy get a new show? I guess I'm not giving away too much to say that he does, eventually, and John's storyline is invested in that one, without saying more. I wanted the reader to be focusing on that, and almost forget to be focusing ahead on all the possibilities when this happened. And I think that's more true. I think John's death was much less sort of inevitable, and I don't think it was a winding-down of his life. If I said anything new about John it's that I think this was the beginning of a prolonged second act in John's life that would have been really fruitful.