Accessibility links
After More Than 4,000 Years, Vibrant Egyptian Tomb Sees The Light Of Day Particularly striking are its well-preserved colors – light yellows, rich blues and a reddish-brown skin tone. Officials announced the discovery Saturday at the site in Saqqara, outside of Cairo.

After More Than 4,000 Years, Vibrant Egyptian Tomb Sees The Light Of Day

After More Than 4,000 Years, Vibrant Egyptian Tomb Sees The Light Of Day 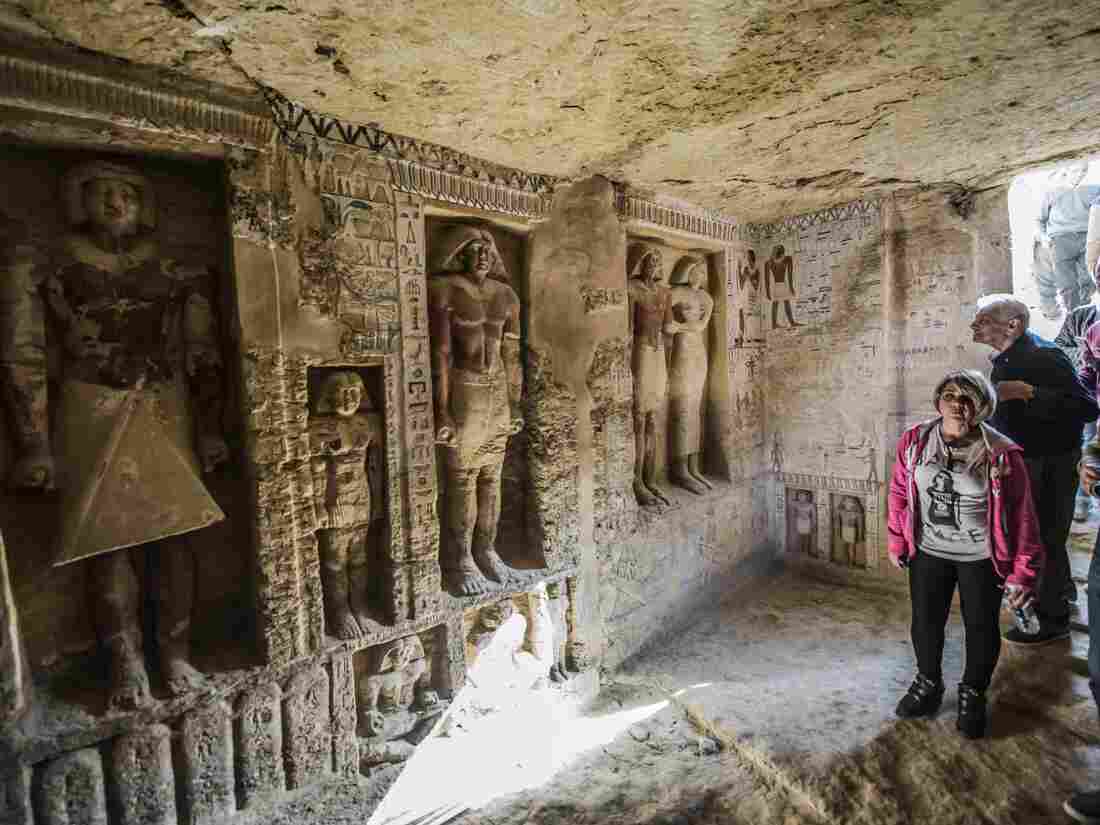 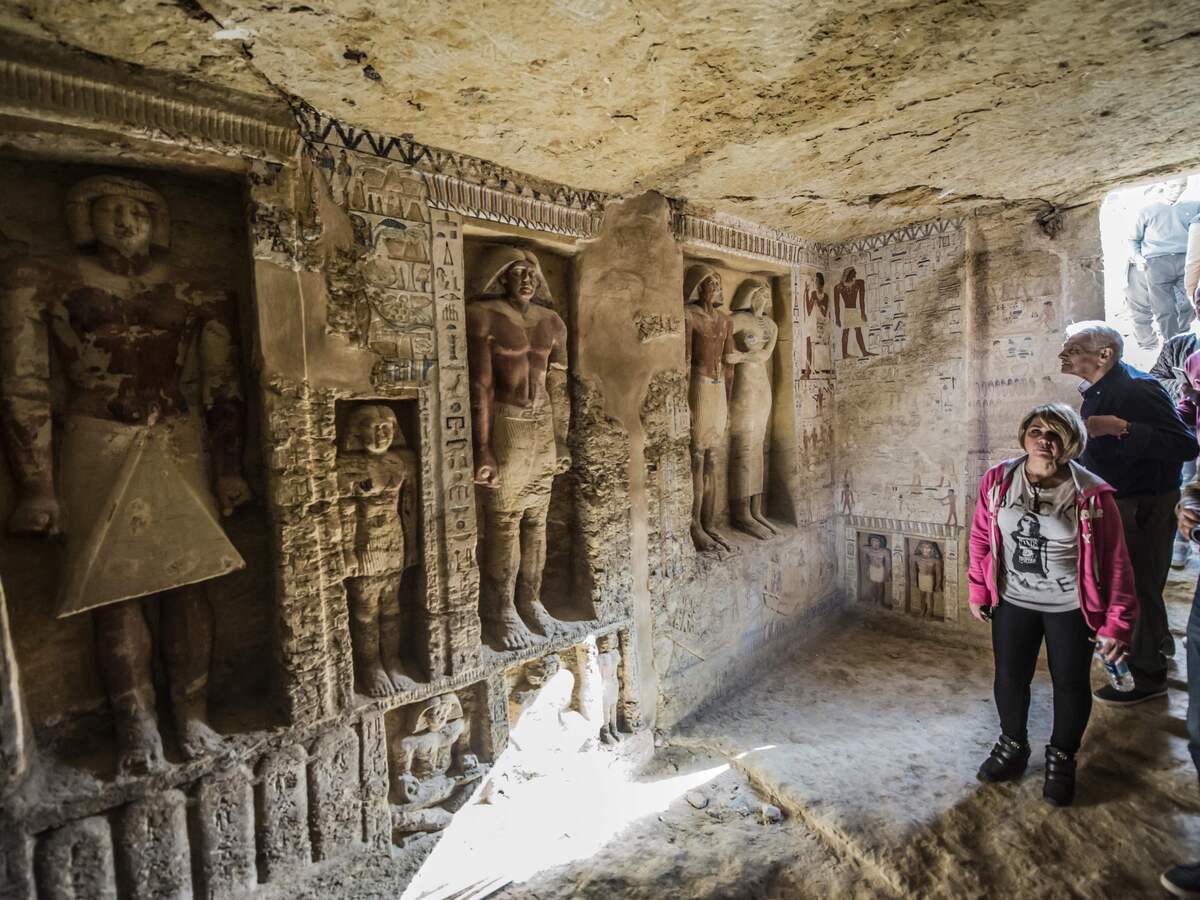 Visitors enter a newly-discovered Egyptian tomb at the Saqqara necropolis on Saturday.

More than four millennia after being chiseled by Egyptian artisans, the intricate hieroglyphics and stone carvings of an ancient tomb have been uncovered.

Egyptian officials made the announcement Saturday at the site of the discovery in Saqqara, outside of Cairo, according to multiple media reports. Photographs of the tomb show a narrow doorway leading to a rectangular room, its walls covered with carved symbols, images and human forms. Particularly striking are their well-preserved colors – light yellows, rich blues and a reddish-brown skin tone.

"The color is almost intact even though the tomb is almost 4,400 years old," said Mostafa Waziri, secretary-general of the Supreme Council of Antiquities, according to Reuters. He told reporters the find was "one of a kind in the last decades." 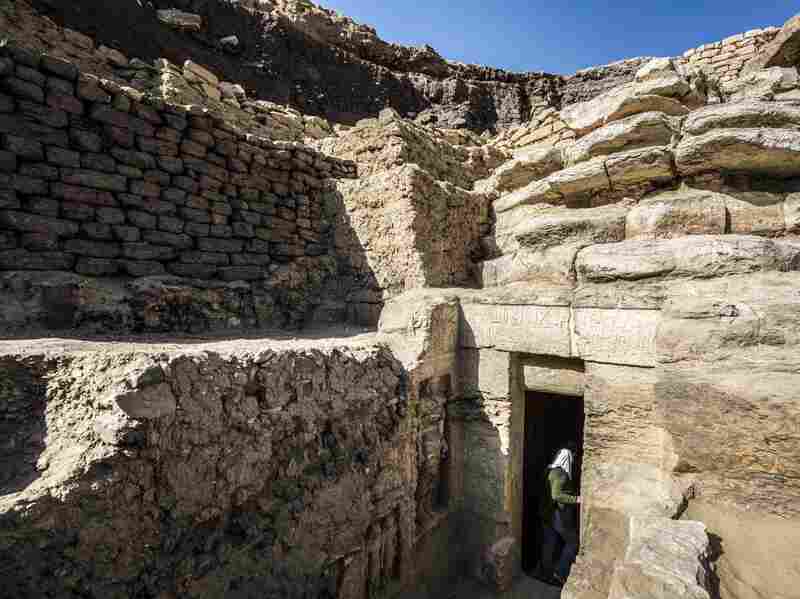 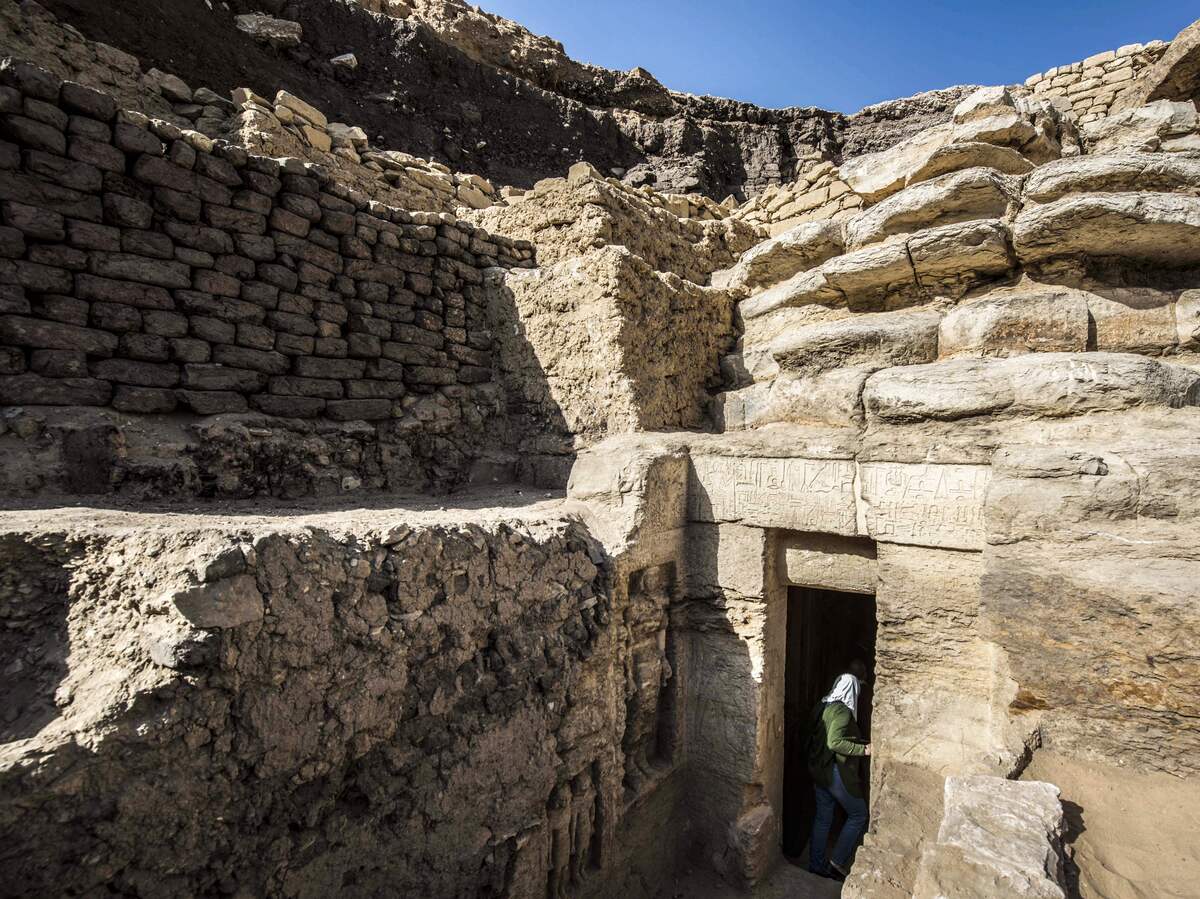 The entrance of the newly-discovered tomb, seen Saturday.

This rediscovered site is part of a massive complex that has proven invaluable to historians and researchers, as described by the magazine Archaeology:

"Thousands of tombs are spread across an area nearly four miles long and nearly a mile wide, and covering more than 3,000 years of complex Egyptian history. ... Saqqara has yielded some of antiquity's most compelling art and architecture, from the magnificent complex of Djoser, which set the standard for future pharaonic tombs, to intimate, carved stone friezes picturing some of the most moving scenes of daily life in ancient Egypt."

The tomb uncovered this week dates from the reign of Fifth Dynasty Egyptian King Neferirkare Kakair, Reuters reports. The news site Egypt Today reports that the site honors Wahtye, a purification priest. It also details the collection of domestic moments carved into the walls "featuring Wahtye ... and his family, in addition to scenes depicting the manufacturing of pottery and wine, making religious offering, musical performances, boats sailing, the manufacturing of the funerary furniture, and hunting." 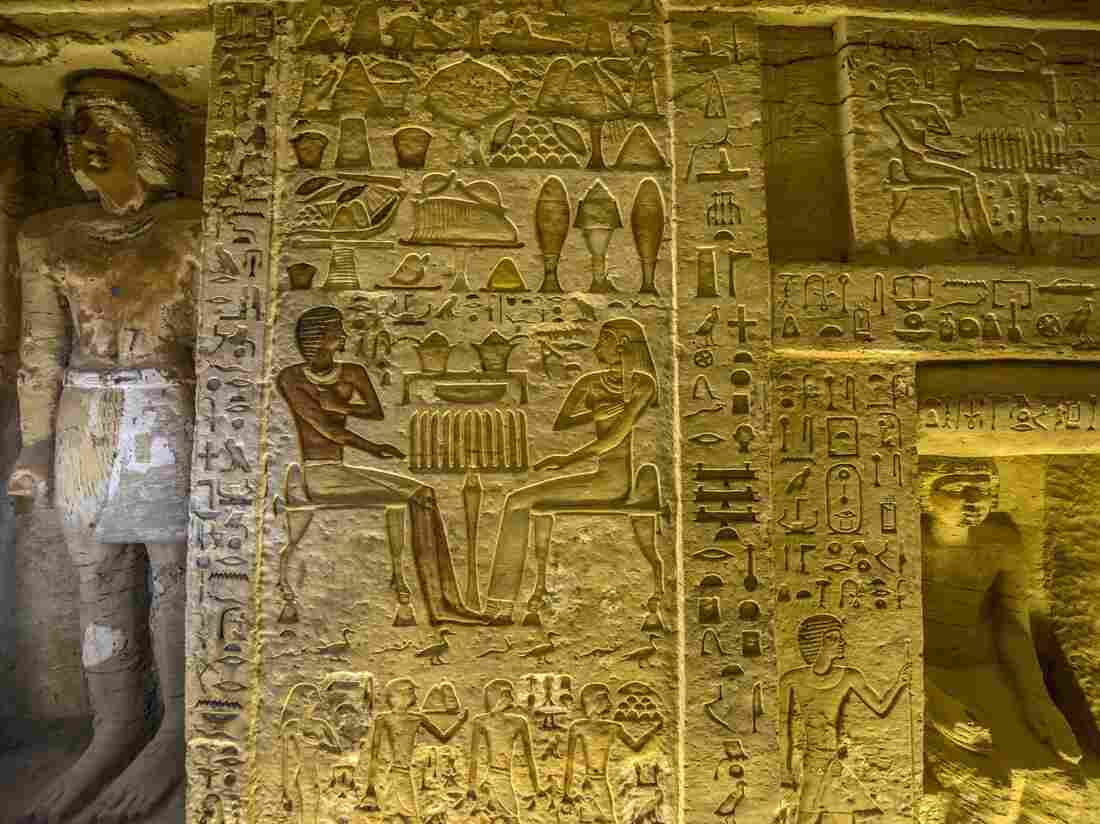 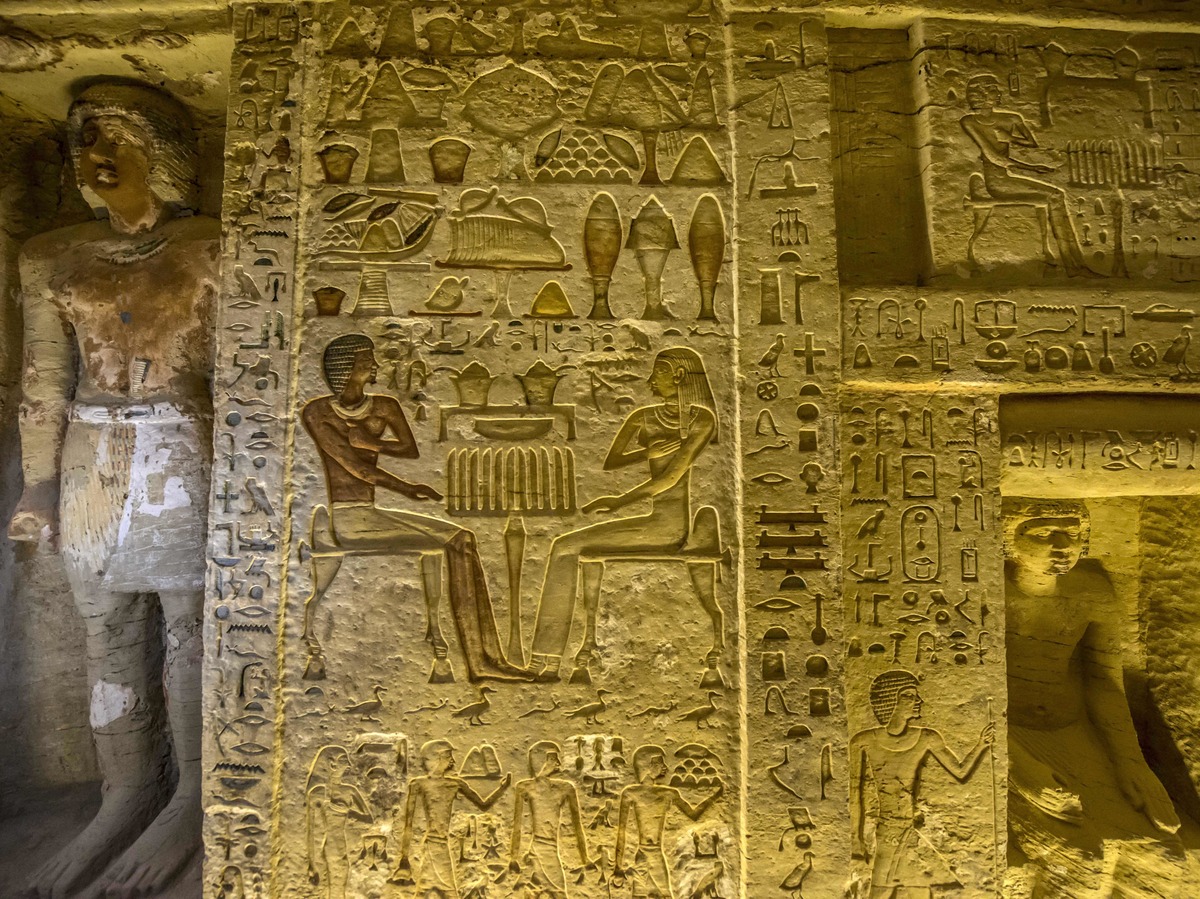 An interior view of the tomb.

As NPR's Sasha Ingber has reported, Egyptian discoveries such as the one announced Saturday are both an archaeological achievement and a public relations coup – new finds can attract visitors to the country, still recovering from a slowdown in tourism caused by political unrest.

Another Fifth Dynasty tomb, one that belonged to Hetpet, a priestess to the goddess of fertility Hathor, was revealed in February. And last month, Egypt's Ministry of Antiquities announced the discovery of 100 wooden feline statues and dozens of mummified cats.

This latest tomb was uncovered on Thursday, Reuters reports, and still contains a number of sealed shafts that could lead to sarcophagi or other archaeological treasures. Excavation of those openings will begin Sunday.