Accessibility links
'Bleed Out' Shows How Medical Errors Can Have Life-Changing Consequences Steve Burrows' new HBO documentary, Bleed Out, follows the medical malpractice suit he filed on behalf of his mom, who lapsed into a coma after surgery. 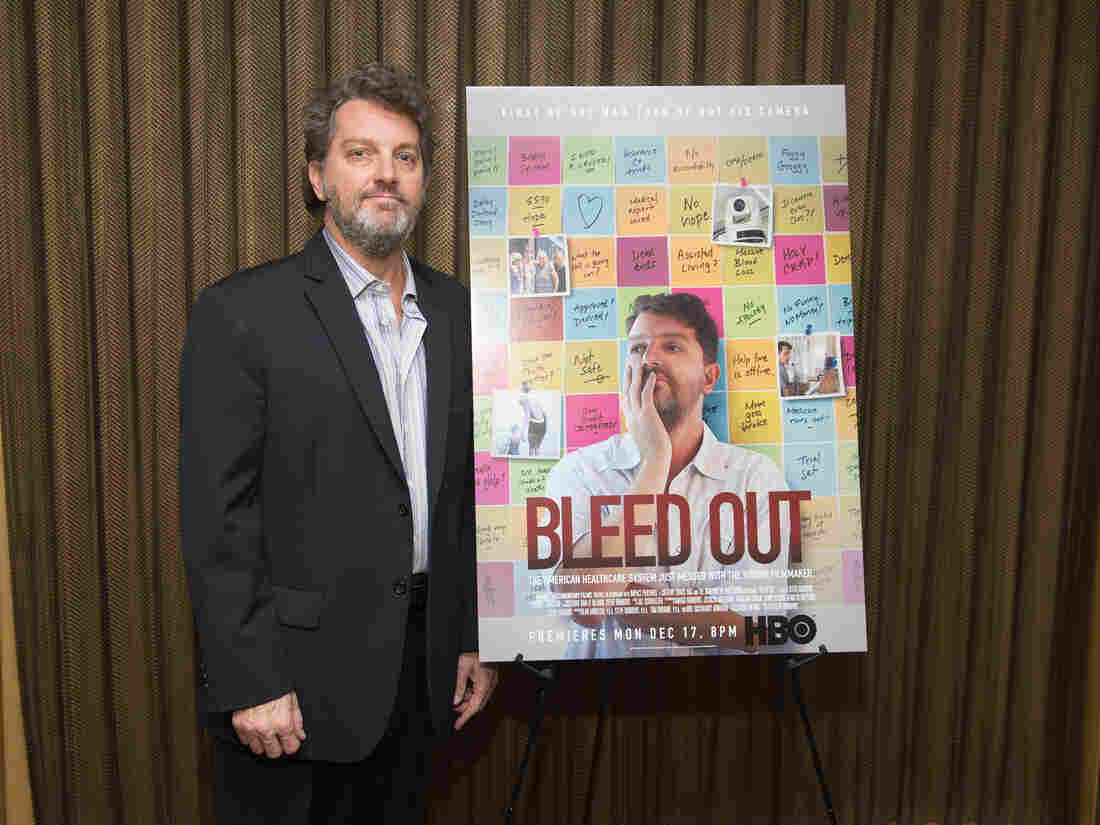 In Bleed Out, filmmaker and comedian Steve Burrows documents the 10-year odyssey of trying to figure out what went wrong when his mom went in for a hip replacement surgery and came out with brain damage and mobility issues after a weeks-long coma. Noam Galai/Getty Images for HBO hide caption 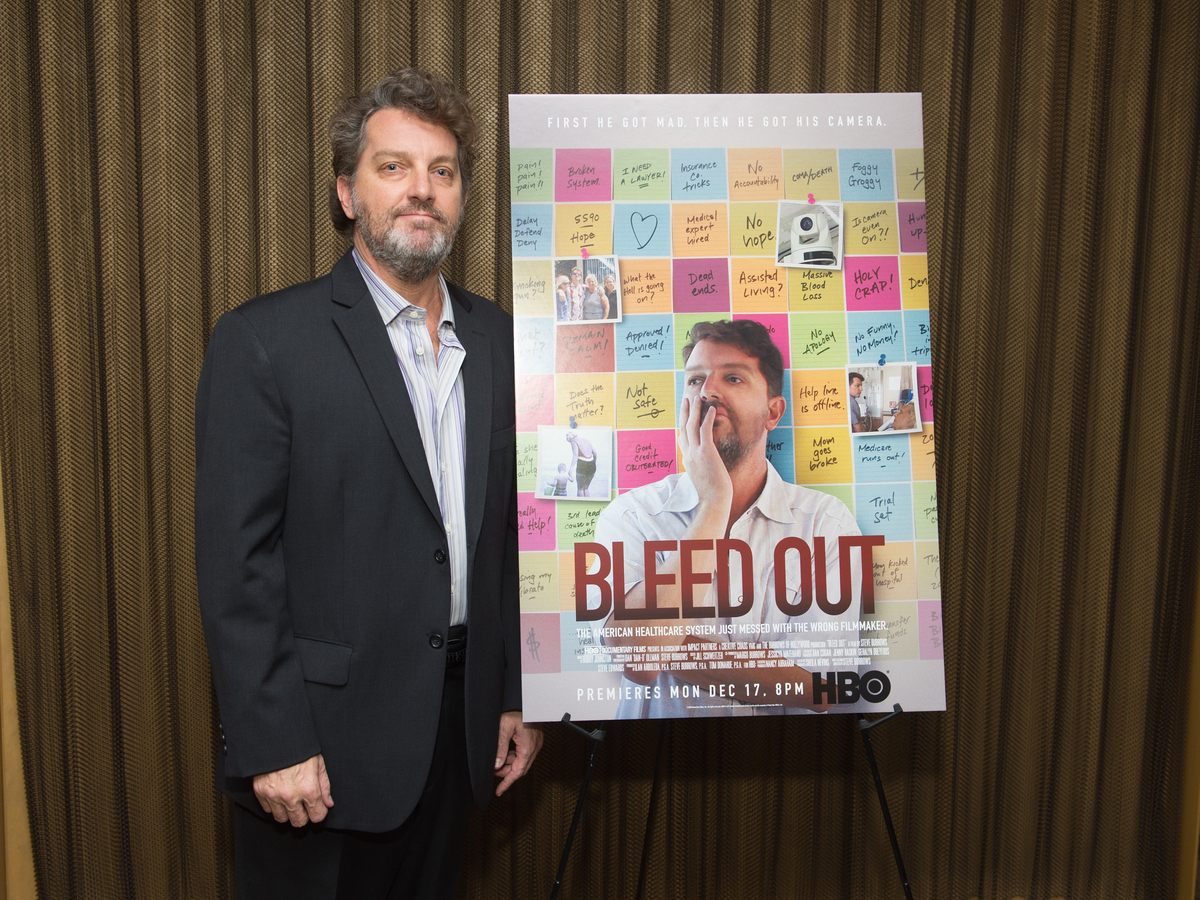 In Bleed Out, filmmaker and comedian Steve Burrows documents the 10-year odyssey of trying to figure out what went wrong when his mom went in for a hip replacement surgery and came out with brain damage and mobility issues after a weeks-long coma.

In 2009, Steve Burrows' mom, Judie, went in for hip replacement surgery. She came out with brain damage and mobility issues after a weeks-long coma that would change her and her family's life.

In the new HBO documentary Bleed Out — Burrows, a filmmaker and comedian, tracks his 10-year odyssey to find out what happened to his mother and who is to blame. It's a deep dark dive into the heart of America's health care system.

What happened to Judie is complicated, but it essentially began with massive blood loss.

A Photographer Turns A Lens On His Father's Alzheimer's

"In the end, that's really how this whole thing started," Burrows says in an interview with NPR's Lulu Garcia-Navarro. "She lost over half the blood in her body."

After her surgery, she was put into recovery and left alone with that's called an electronic intensive care unit, or eICU.

With a series of monitoring tools that usually include microphones, video cameras and alarms, eICUs are meant to provide the 24-hour monitoring that many patients require after a major medical emergency.

"This [eICU] didn't notice my mom was in a coma for at least a day and a half and I wanted to talk to the ICU doctor who was there that night," Burrows says. "We were told there was no doctor there. I said 'Well that's insane, what do you mean?' "

He says there were doctors monitoring the cameras out by the airport in Milwaukee and they were supposed to be the safety net for his mother.

Burrows says that when he asked whether the camera was on, the head of the ICU told him it wasn't because of patient privacy issues.

As Burrows dug into his mother's case and the failure of the eICU to recognize her coma, he came across a staggering statistic. According to a study by researchers at Johns Hopkins University, the third leading cause of death in the United States is medical errors.

And those errors, Burrows says, can leave patients one step away from financial ruin.

"That's the hard lesson we learned," Burrows says. "My mom, certainly. She was a single mom, she raised my sister and I. She did everything right. She was set. And this happened and two and half years later, she's broke. She's on Medicaid ... and now we, all the American taxpayers, are paying for her."

Will Congress Bring Sky-High Air Ambulance Bills Down To Earth?

Burrows says that before her surgery, Judie was a vibrant, independent and adventurous woman. These days, her health care has become increasingly more complicated, and in the past two months, she has started long-term hospice care.

Throughout the 10 years that Burrows documented his mother's struggles, he recorded many conversations — both openly and secretly. One of those conversations was with the doctor who conducted his mom's hip replacement surgery. At the time, the doctor didn't know he was being recorded.

Steve: If you were in my shoes, right now, what would be ...

Doctor: I'd like an accounting, just like you, for why in the hell no doctor was there. Their intensive care unit, where this problem occurred, we still don't know what happened. We don't have accountability.

Steve: I mean, do you think they'll ever tell the truth?

Up until this point, Burrows had been asking basic questions to the doctors and caregivers involved in his mom's situation and their stories were always changing, he says. When he finally heard what he thought was the truth by the doctor, Burrows says it was shocking.

He started filming his mother's pain and suffering after consulting with attorneys about trying to pursue justice for her. She was at her most vulnerable. It was painful and uncomfortable, but he knew he had to do it.

At the time, he didn't want to make a documentary, but he eventually decided others needed to know what happened.

"When I started to find out about this universal thing, about the third leading cause of death, and then the eICUs, I thought I really have to tell people about what I just found out," Burrows says. "Because I'm a pretty informed guy and I didn't know about any of this stuff."

Although he's done his best to make sure his mother is comfortable, Burrows says he hasn't been able to give her what she really wanted, which was to get her life back.

Burrows says he hopes that as people watch the film, they realize they need to ask thoughtful questions when it comes to their health care, and he stressed the importance of having a patient advocate in case things like this happen.

"You need to shop for doctors and hospitals like you'd shop for a car," he says. "You know, shop like your life depends on it because we found out that it does."

NPR's Sarah Handel and Cindy Johnston produced and edited the audio for the story. Wynne Davis adapted it for Web.