Accessibility links
A Nun In India Accuses A Bishop Of Rape, And Divides The Country's Christians A Roman Catholic nun says a bishop raped her multiple times between 2014 and 2016. The bishop denies wrongdoing and is out on bail. Some Indian Catholics are blaming the nun for tarnishing the church. 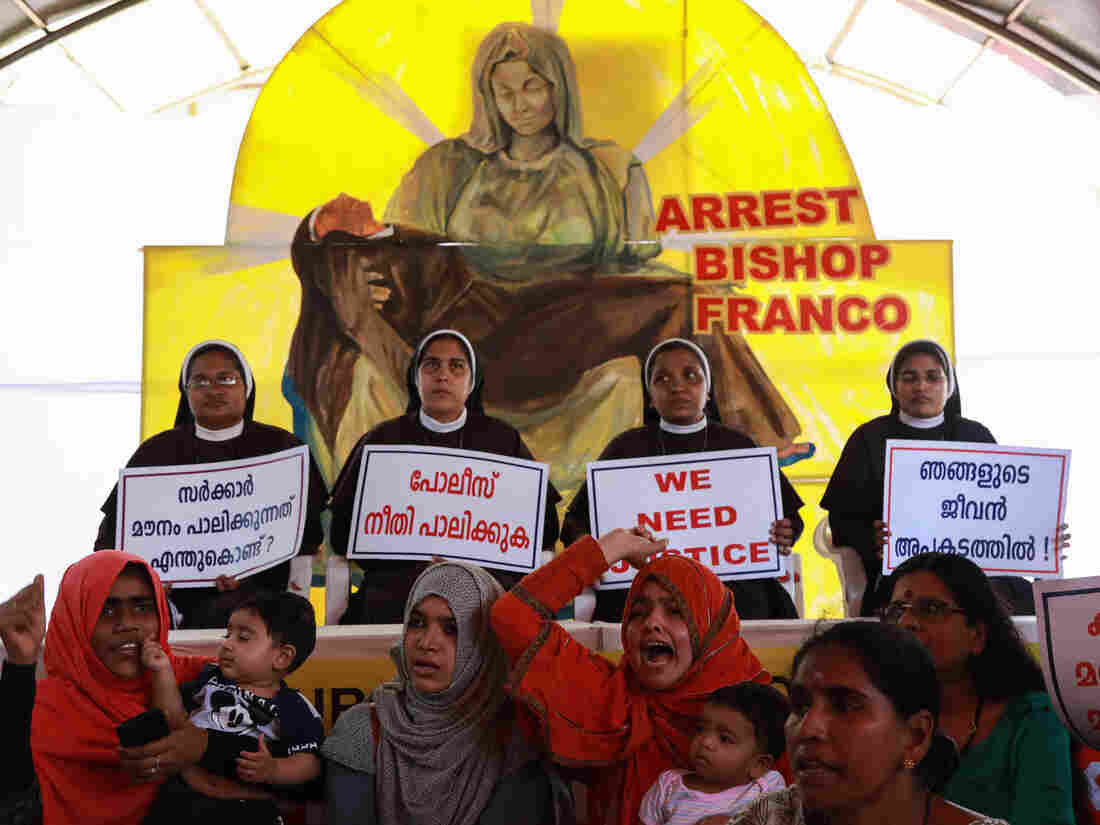 Nuns and supporters demand the arrest of Bishop Franco Mulakkal, outside the High Court in Kochi in the southern Indian state of Kerala in September. -/AFP/Getty Images hide caption 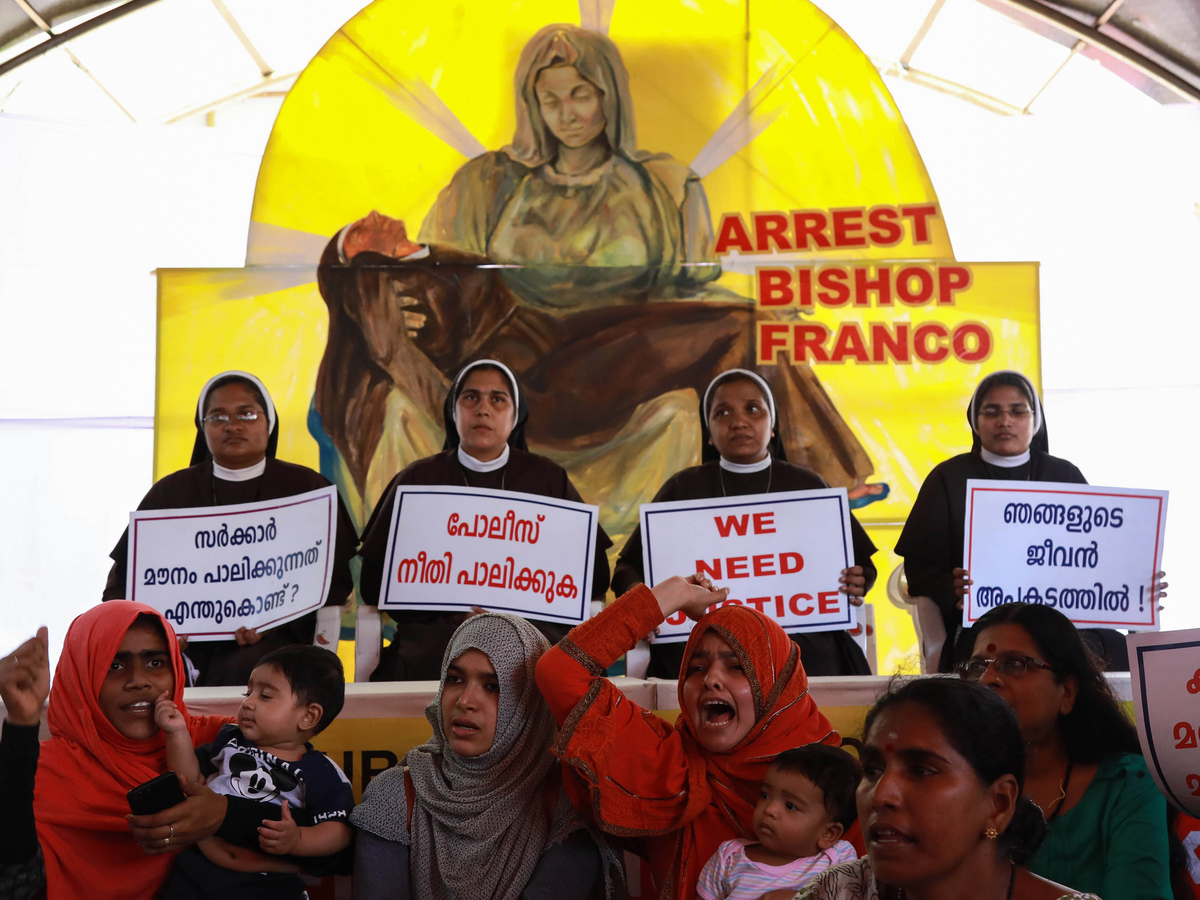 Nuns and supporters demand the arrest of Bishop Franco Mulakkal, outside the High Court in Kochi in the southern Indian state of Kerala in September.

The narrow lane that leads to what may be India's most infamous convent winds past spindly coconut palms and fat banana leaves flapping in the breeze. Tropical bird calls break through the muffled drone of female voices praying inside a house with pink stucco columns.

The bucolic setting, in the jungle of India's southwestern Kerala state, is home to about a dozen Roman Catholic nuns who belong to the Missionaries of Jesus order. But their peace has been shattered by what allegedly happened here between 2014 and 2016.

One of the nuns says she was raped by a bishop more than a dozen times. The bishop, Franco Mulakkal, denies the nun's accusations, and is out on bail. The Vatican has temporarily relieved him of his duties while he defends himself in court.

The alleged victim is huddled upstairs, under police guard in the convent. She has received death threats.

Meanwhile, her fellow nuns have become activists, staging street protests in her defense — a rebellion against India's church leadership from within.

"So much trust was there. We never expected this thing," says Sister Anupama, 30, who joined the convent 10 years ago and began using only one name.

The nuns describe how Mulakkal, 54, used to come to the convent for dinner. He is originally from Kerala but was stationed in Punjab, in the country's north, and used to return home often. He'd frequently spend the night at their convent. 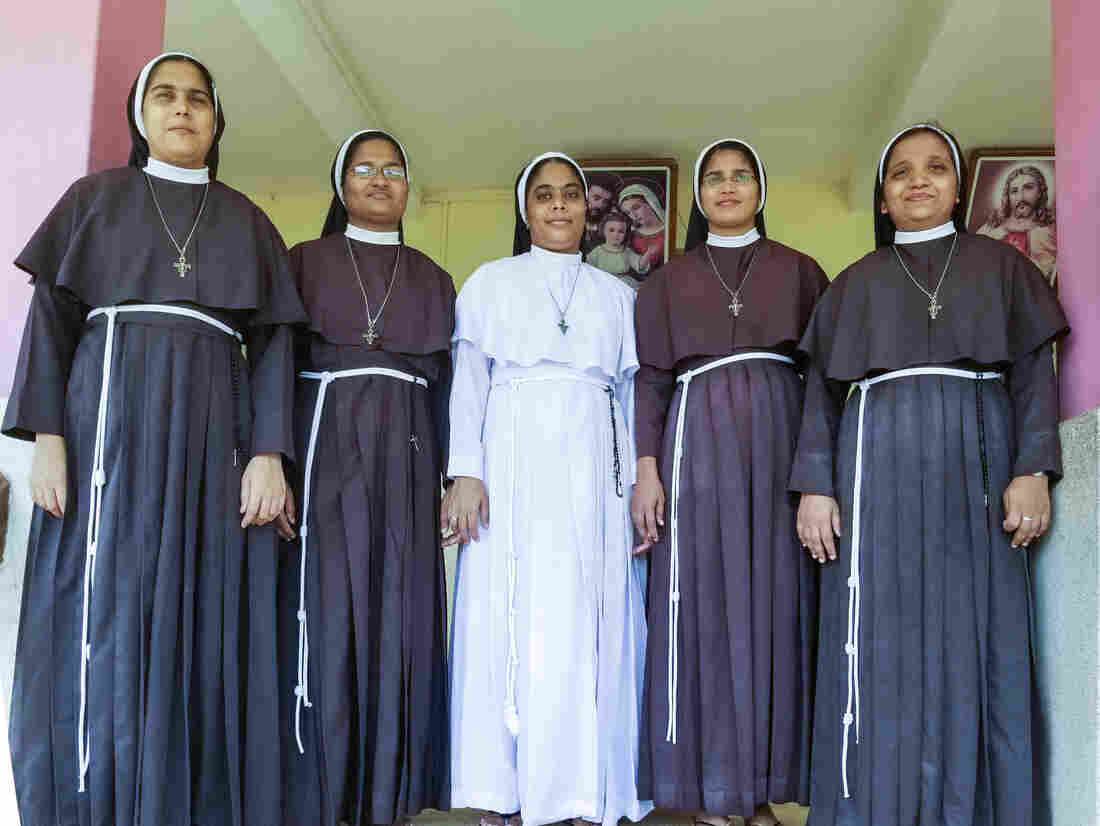 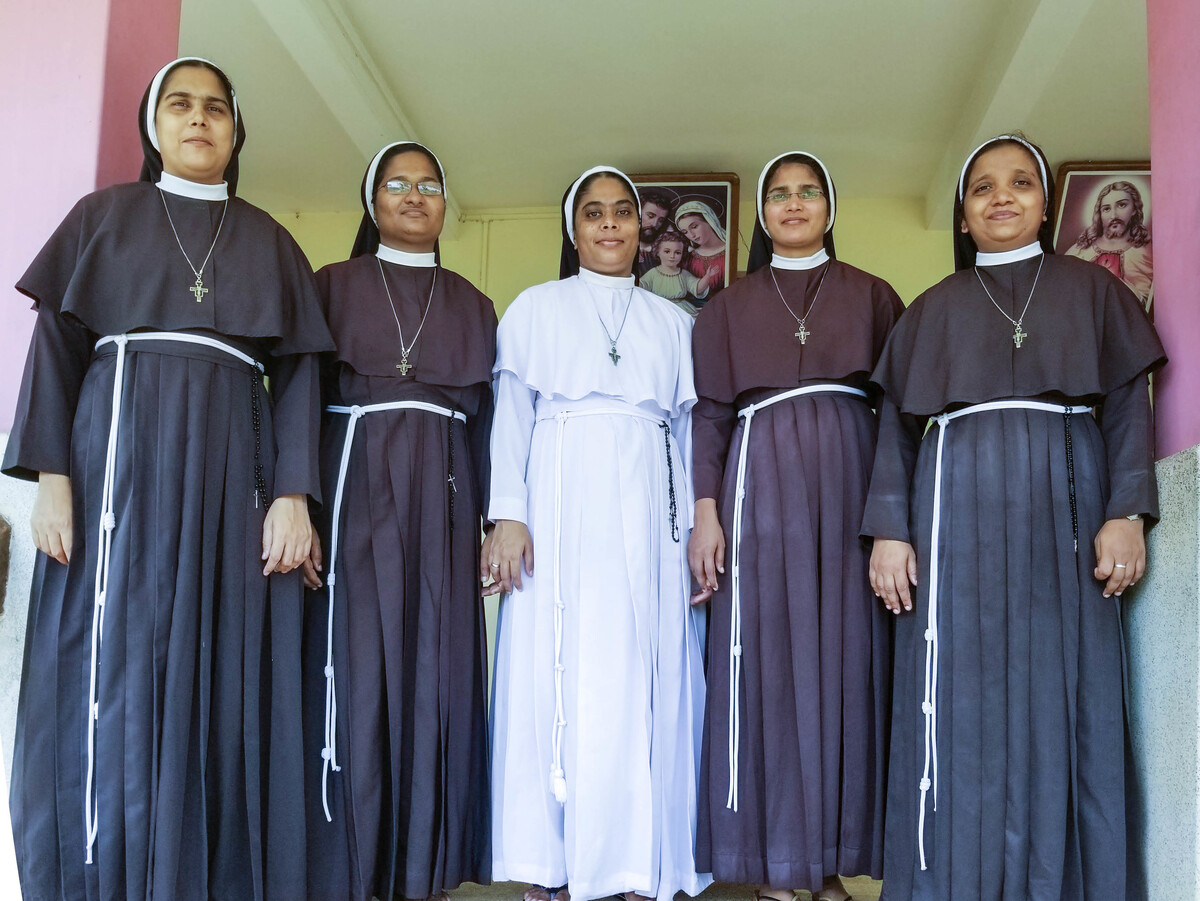 From left: Sisters Alphy, Anupama, Ancitta, Neena Rose and Josephine stand on the steps of their convent in southern India's Kerala state.

The nuns say they only learned much later that he allegedly raped their sister during those visits.

"She was always upset and she was crying always," Anupama says. "Whenever we asked, she used to tell us that she had a headache."

They say she was too frightened to come forward until earlier this year.

"Girls are supposed to suffer, but boys are not like that. They've got all the freedom," says Sister Alphy, 36. "It's the same in the church also. We know many [other] cases [of abuse] are there. But bishops and high authorities always support the men."

The trial of Bishop Mulakkal is expected to take place next year. It has divided India's 28 million Christians. Many blame the nun.

Christianity is India's third-largest faith, after Hinduism and Islam. Some of Kerala's Christians trace their lineage back to St. Thomas, one of Jesus' 12 disciples, who the faithful believe landed on India's southwest coast in 52 A.D.

While no official polls have been conducted, Kochurani Abraham, a feminist theologian and former nun in Kerala, says a majority of India's Christians appear to support the bishop and question the nun. Based on her knowledge of the Christian community and her conversations with parishioners, she estimates about 2 percent may leave the Catholic Church because of the scandal. But, she believes, more than 60 percent blame the nun for tarnishing the church. 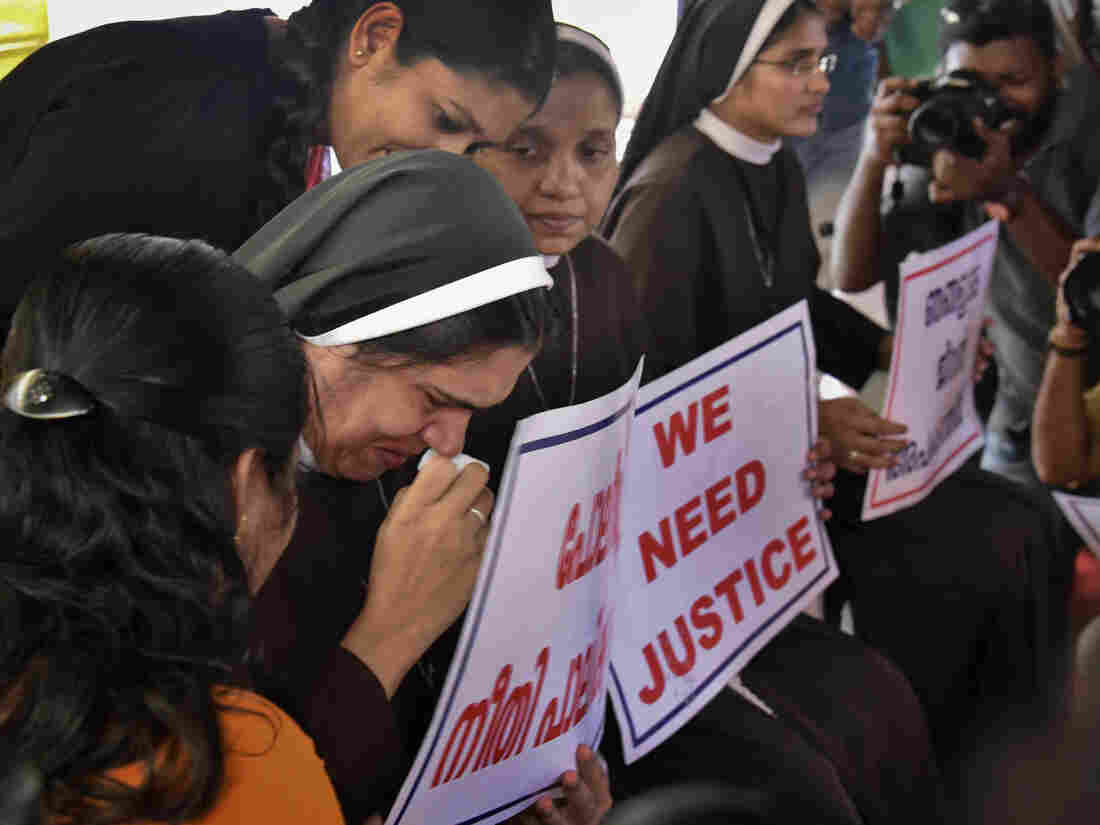 A nun cries as she participates in a protest demanding the arrest of a bishop accused of rape, in Kochi, Kerala, India in September. AP hide caption 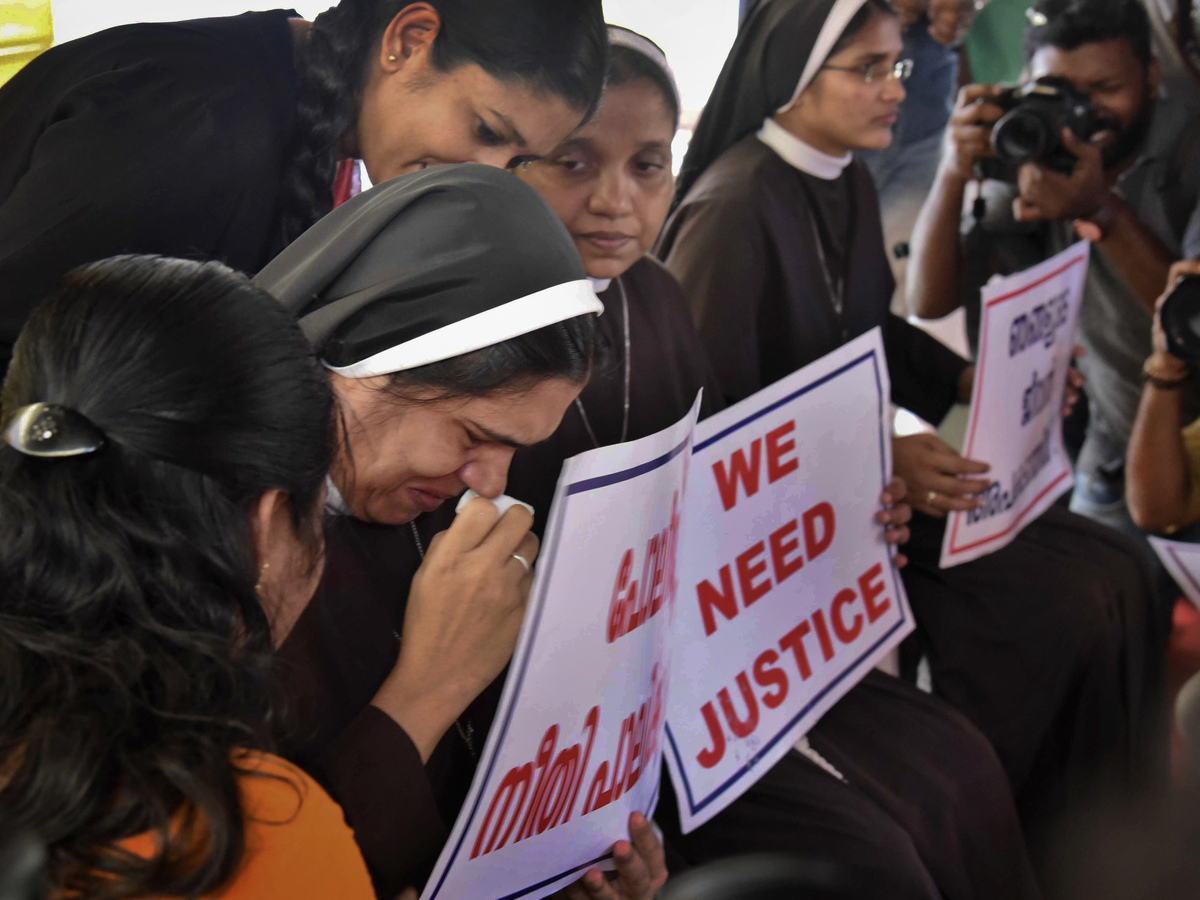 A nun cries as she participates in a protest demanding the arrest of a bishop accused of rape, in Kochi, Kerala, India in September.

Some believe the nun should have been arrested — instead of, or at least alongside, the bishop.

Cyriac Joseph, 71, a retired Supreme Court justice and prominent Catholic who is close to church leaders, is skeptical of the nun's claims.

"After the first incident — if at all it happened — if she doubted this man may misbehave, it was easy for her to refuse to go to his room alone," he says.

It's unclear whether the nun did in fact visit the bishop's room or whether the alleged rapes happened in another part of the convent. Details may come out at Mulakkal's trial next year.

Facing such skepticism in the community, the once-demure nuns of the Missionaries of Jesus took to the streets in protest and led rallies all summer, demanding Mulakkal's arrest.

"If simple nuns with full-fledged habit – they are not feminist theologians – if they could come out on the street, that is a big breakthrough," says Abraham.

In September, authorities did arrest Mulakkal. He spent more than three weeks in jail before his release on bail in October. The Catholic clergy threw him a party. Hundreds of well-wishers threw flowers. An Indian politician called his accuser a prostitute.

Mulakkal's office did not respond to NPR's requests for an interview. Neither did the headquarters of the Missionaries of Jesus. The Catholic Bishops' Conference of India said it was unable to comment.

Before Mulakkal was arrested, Sisters Anupama and Alphy say they sent multiple letters to the Vatican asking it to intervene, and never got any reply. But in October, an Indian archbishop made a rare apology for scandals in the Catholic Church around the world, though he did not mention Mulakkal by name.

"I regret that these things happened. I publicly apologize for the scandals caused by the church leaders to the common Catholic faithful," Archbishop Kuriakose Bharanikulangara told a Bible convention in New Delhi. "The sexual abuse of the church leaders cause their faith suffer a lot."

But a lower-ranking priest, the Rev. Augustin Vattoly, 48, who attended the nuns' protests, was given a warning by the church for doing so. He describes the clergy's strategy when one of their own is accused:

"The first thing they will do is defend that cardinal, defend that bishop. Cover up the issue," Vattoly says. "Frighten them that if you are going against a priest, you are against God."

Priests are particularly revered among Indians, Abraham notes, because their status reminds Indians of something very familiar to them.

"Patriarchy and caste hierarchy go hand in hand," she explains.

This year, the Catholic nun was not alone in alleging abuse by priests. Female parishioners from several other denominations also started coming forward with accusations.

Elsewhere in Kerala, four priests from the Malankara Orthodox Church have been arrested for allegedly raping and blackmailing a mother of two who had attended their church for years.

The husband of the alleged victim, Alex Thomas, tells NPR his wife was molested by one of the priests as a teen. When she confessed that to three other priests, they used her account to blackmail and rape her, her husband says.

In July, India's National Commission for Women, a government body, called on churches to stop hearing confessions from female faithful, to protect them from blackmail.

The commission chair, Reena Sharma, told reporters she believes the number of women who have spoken out so far "is just a tip of the iceberg."

But many victims and their families doubt that justice will be served.

"Never. Nothing will happen. No change will happen," says Thomas, whose wife's complaint led to the Malankara priests' arrests. "The church is like a big corporation. They can manipulate anything. And believers, they're a huge number of people, you know?"