Accessibility links
A Government Shutdown Is A Real Possibility. Here's What That Would Mean Even a partial government shutdown would leave some 800,000 government workers without pay over the holidays, although many would remain on the job. 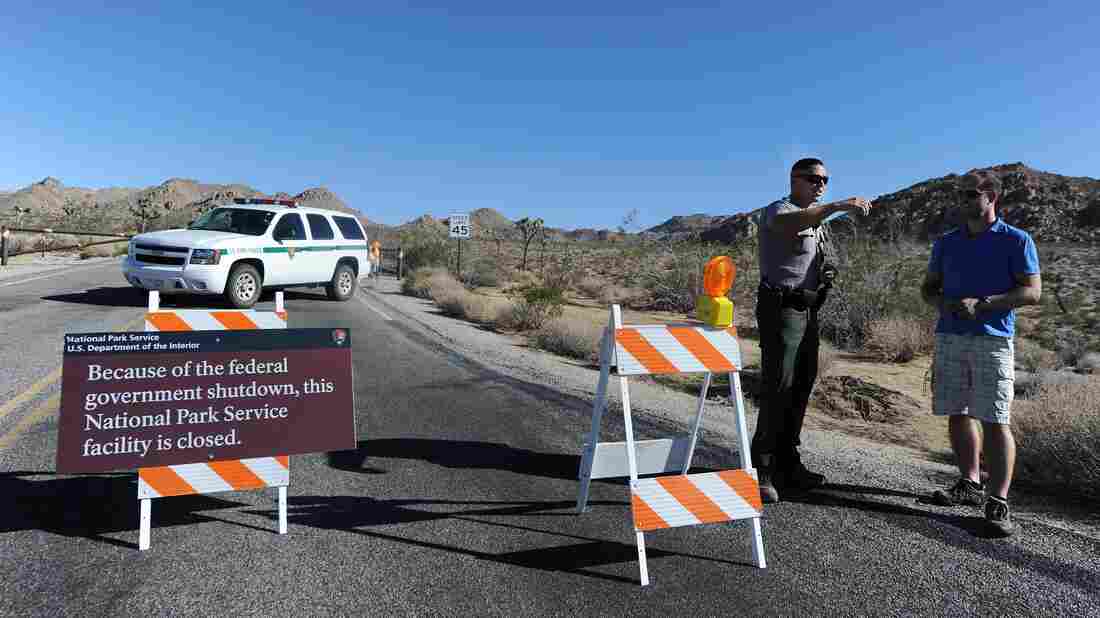 A U.S. park ranger gives a tourist suggestions of other nearby places to visit while Joshua Tree National Park was shut down in 2013. Robyn Beck/AFP/Getty Images hide caption 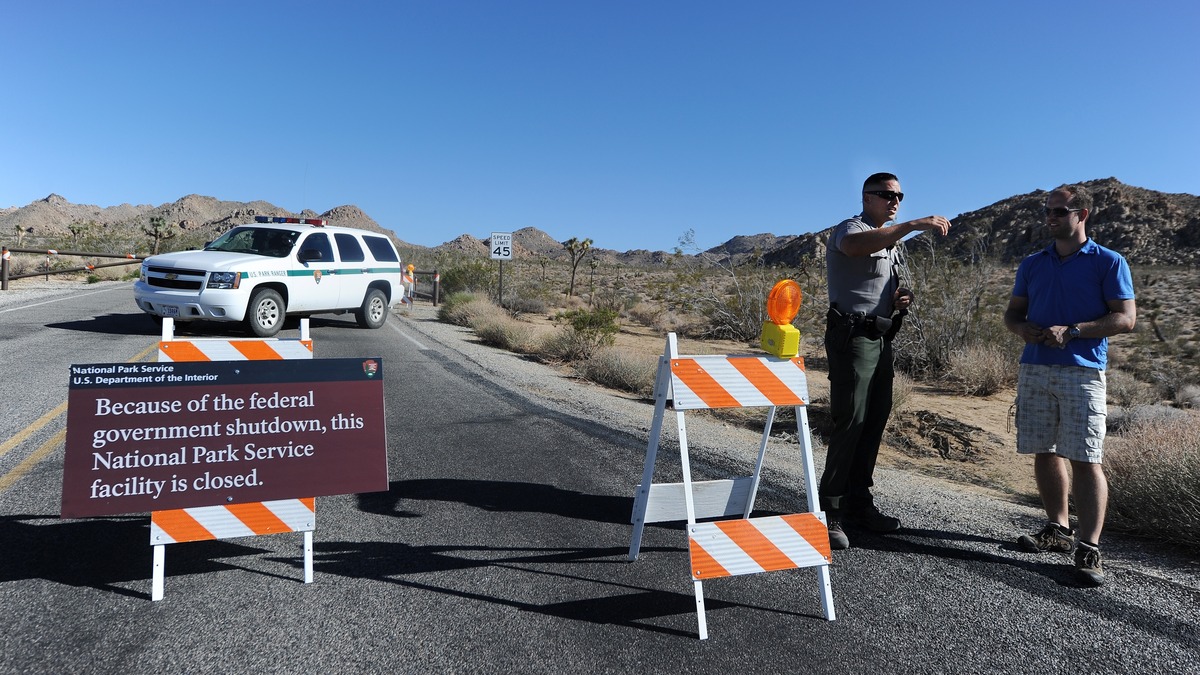 A U.S. park ranger gives a tourist suggestions of other nearby places to visit while Joshua Tree National Park was shut down in 2013.

Planning a trip to the Grand Canyon over the coming holidays?

You might want to have a Plan B ... or at least bring your own trail maps.

While the Grand Canyon, along with the rest of the national park system, is expected to remain open in the case of a government shutdown, visitor centers at the facilities probably won't. And some iconic sites, including the Statue of Liberty, may be closed altogether if the park service follows past practices.

That is, of course, unless Congress and the White House resolve their latest spat over funding the federal government.

For the National Park Service and many other agencies, funding runs out on Dec. 21 at midnight. And while the 75 percent of the government whose budget bills are already approved will be unaffected, the remaining 25 percent include some high-profile agencies and departments. Among them:

Independent agencies, including NASA, the Food and Drug Administration and the Environmental Protection Agency, will also be closed. The FDA "does routine, unannounced inspections," Food Safety News wrote in January. "During these partial government shutdowns, FDA likely ceases routine checks while using its 'essential' personnel on problems that arise."

But within those agencies, some 420,000 employees are "excepted," in government parlance, from furloughs; that is, they are considered essential and will be on the job, but they won't be getting paychecks.

They include law enforcement officers at the:

TSA officers will still be screening airline passengers in one of the busiest travel periods of the year, but will very likely have to wait for paychecks during the holiday season.

An additional 380,000 employees will be furloughed — that is, sent home — also without pay, although Congress has previously appropriated back pay for federal workers when the prior shutdowns have ended.

Is this any way to run a government? Well, President Trump last week said he would "be proud to shut down the government" over his demands for money for a border wall, although he has since tried to back away from that position.

House Democratic leader Nancy Pelosi accused Trump of not understanding that "people need their paychecks. Maybe that's not the life he leads," Pelosi told reporters Thursday. "It's not enough to say we'll pay you in January when people have to make ends meet in December."

Pelosi told reporters Tuesday bipartisan congressional leaders may be working on their own Plan B. One option they tossed around to avoid a shutdown was for Congress to pass a stopgap bill to keep federal agencies funded through early January. But they haven't reached an agreement even on that limited measure yet.

The American Federation of Government Employees, the largest federal workers union, called on the two sides to resolve their dispute.

"Our members take home an average of around $500 each week," AFGE President J. David Cox said in a statement. "Any interruption in their pay will have a devastating impact on them, their families and their communities."

Cox added, "Our members are asking how they are supposed to pay for rent, food and gas if they are required to work without a paycheck. The holiday season makes these inquiries especially heart-wrenching."

If it happens, this would be the second partial government shutdown this year. Agencies closed over a weekend last January in a brief spending squabble.
So it comes as no surprise perhaps that a new survey of government employees by the Partnership for Public Service finds a decline in how federal workers view their jobs and workplaces, what the study calls "employee engagement," from last year.

Scores declined at almost 60 percent for agencies, while 40 percent improved. Over the past three years, scores improved at some 70 percent of agencies.

The president himself will be out of town during the shutdown, on a 16-day stay at his Mar-A-Lago resort in Palm Beach, Fla. Not the greatest of optics, if those plans hold.