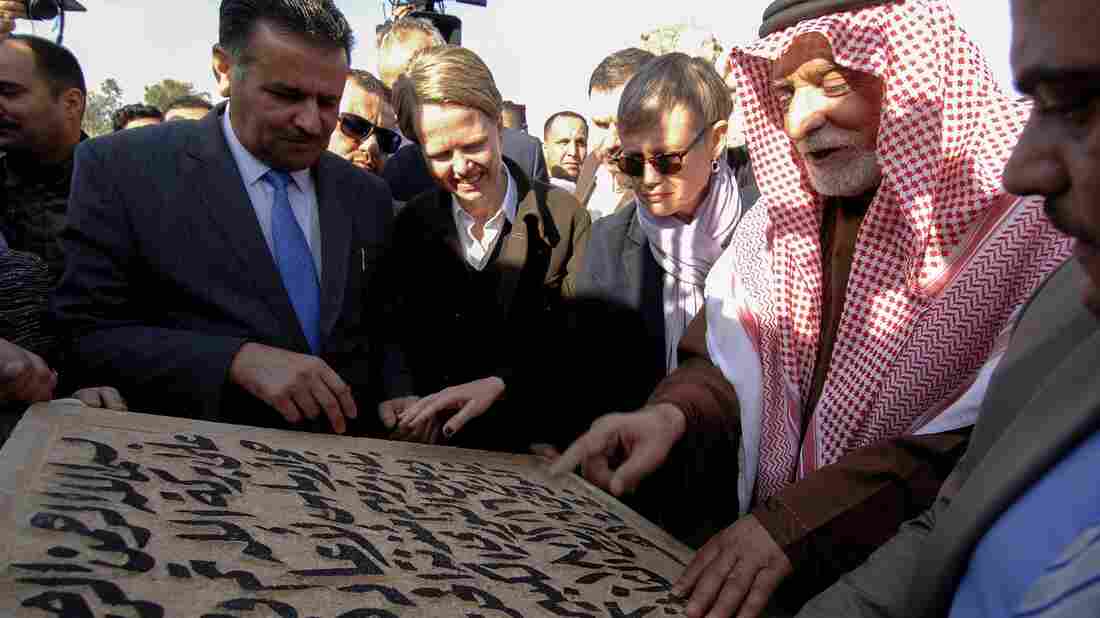 Abdullatif Al-Humaym, the head of Sunni Muslim endowments in all of Iraq, places the cornerstone for the rebuilding of the Great Mosque of Al-Nuri in Mosul. The historic mosque and its leaning minaret were destroyed in 2017 when Iraqi forces reclaimed the city from the Islamic State. Zaid al-Obeidi/AFP/Getty Images hide caption 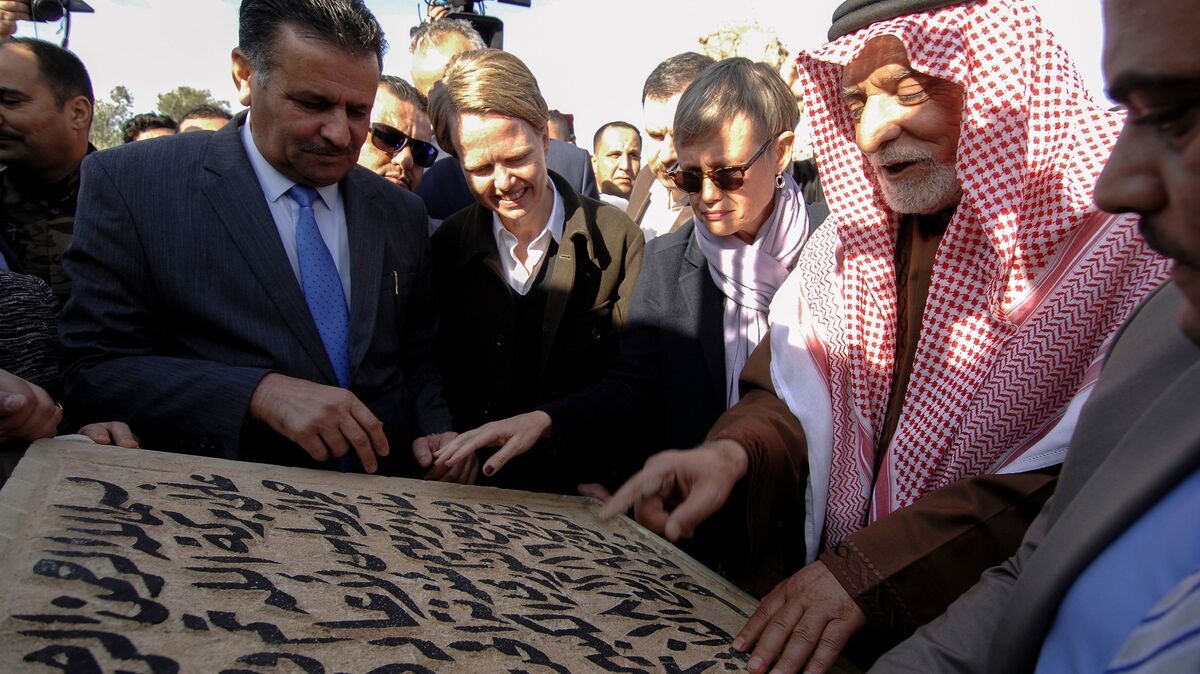 Abdullatif Al-Humaym, the head of Sunni Muslim endowments in all of Iraq, places the cornerstone for the rebuilding of the Great Mosque of Al-Nuri in Mosul. The historic mosque and its leaning minaret were destroyed in 2017 when Iraqi forces reclaimed the city from the Islamic State.

Iraqi religious leaders marked the start of an effort to restore the iconic al-Nuri mosque in a ceremony yesterday in Mosul, another sign of the city's recovery after years of Islamic State occupation and months of fighting that flattened entire city blocks.

Abdulateef al-Humayim, president of the Sunni Endowment in Iraq, which maintains Sunni mosques and shrines, led the proceedings on Sunday. With dignitaries from the European Union and the United Nations in attendance, al-Humayim set the first stone in place for the foundation of the mosque.

UNESCO Iraq representative Louise Haxthausen spoke at the ceremony, calling the mosque's destruction "a moment of horror and despair," according to The National, an English-language newspaper in Abu Dhabi.

The U.N. and Iraq announced plans to rebuild the Great Mosque of al-Nuri last April in partnership with the United Arab Emirates, an effort UNESCO has called "the largest and [most] unprecedented cooperation to rebuild cultural heritage in Iraq ever." The U.A.E. is contributing over $50 million toward the undertaking.

The mosque with its leaning minaret, nicknamed "the Hunchback," stood over the Old City of Mosul for more than 800 years by the time ISIS forces took control of the city in the summer of 2014. Speaking in a rare public appearance from the mosque's pulpit, ISIS leader Abu Bakr al-Baghdadi declared the group a "caliphate," with the intention of establishing dominance over all Sunni Muslims across the world.

Mosul's Famed Mosque And 'Hunchback' Minaret, Destroyed By ISIS, Will Be Rebuilt

Turkic ruler Nur al-Din Mahmoud Zangi, who unified Muslim forces during the Crusades, ordered the construction of the the al-Nuri mosque in 1172. By the 14th century, when medieval traveler Ibn Battuta visited the city, the minaret was already tilting significantly to one side, according to the BBC.

The U.A.E. says the reconstruction project, which is expected to last five years, will create a thousand jobs for young Iraqi graduates from Mosul and Baghdad, according to their newspaper.

UNESCO has put the mosque at the center of its campaign to rebuild Iraq's second-largest city, called 'Revive the Spirit of Mosul.' The agency is also leading restoration efforts for the city's market, the university's central library, two churches and a Yazidi temple. These projects are part of a long rebuilding process for a city that suffered $2 billion in damages, according to the Iraqi government.

The reclamation of the al-Nuri mosque by Iraqi forces in 2017, and the concurrent fall of ISIS in Mosul, effectively marked the end of the Islamic State's urban control in Iraq. But the eight-month offensive to regain control dealt heavy damage to the city. As NPR's Jane Arraf reported, the United Nations said 8,000 homes in the Old City were damaged or destroyed in fighting, and estimates of civilians killed range from 6,000 to tens of thousands.

Now some families have returned and the city is showing signs of its old character again. As Arraf reported for NPR, a book festival in November drew thousands of people to a riverside park in Mosul. And hundreds of people watched an orchestra made up of professionals and local amateurs play a concert in October, conducted by Karim Wasfi, former conductor of the Iraqi National Symphony Orchestra, according to the Washington Post.

"Mosul is coming back to life," Wasfi told NPR's Scott Simon on Saturday. He says he's seen a resurgence of conversations about scientific innovation in the city. "People are committed to being resilient against radicalization to the extent of not accepting this to happen again."