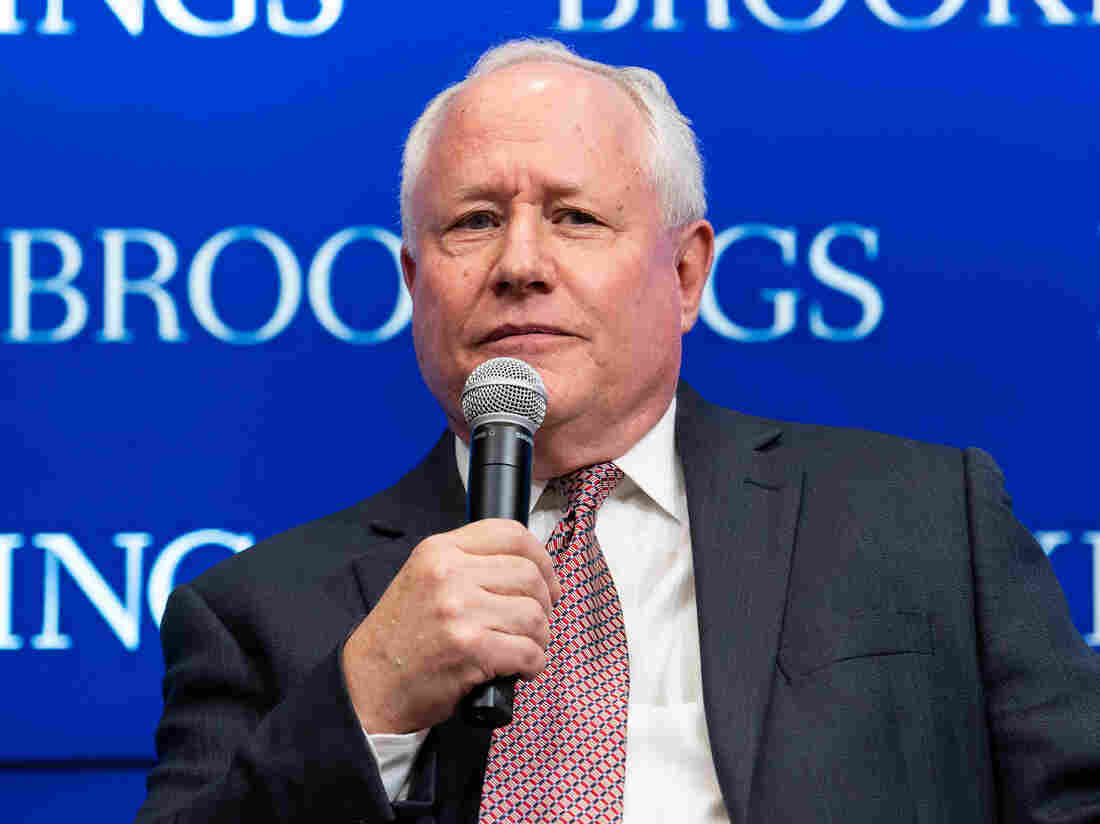 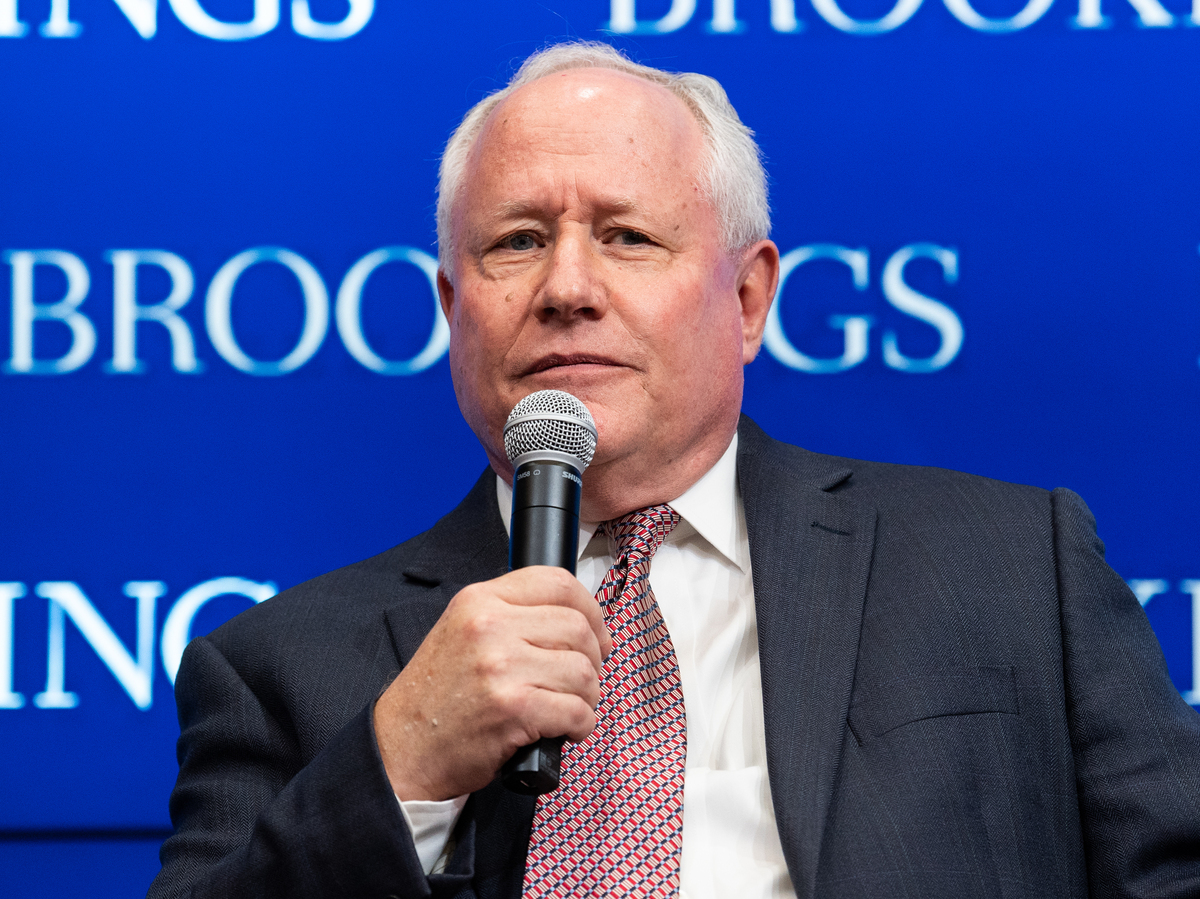 Bill Kristol, the former editor-in-chief of the conservative magazine The Weekly Standard speaks at the Brookings Institution in Washington, D.C.in October.

The Weekly Standard, an influential conservative magazine founded in 1995, published its last issue on Monday, shuttering after steadily losing revenue for years.

The magazine announced on Friday that it was closing down, news that was celebrated by President Trump and some high profile Republicans, while mourned by other GOP writers across the political spectrum.

The magazine was founded by journalists Bill Kristol, Fred Barnes and John Podhoretz, with funding from conservative media mogul Rupert Murdoch. Murdoch funded the Standard for 14 years before he sold it in 2009 to billionaire Philip Anschutz. Anschutz's Clarity Media Group also owns the conservative magazine The Washington Examiner.

Since Anschutz's reportedly $1 million purchase, the magazine declined in readership and revenue. The Daily Beast reports the magazine lost "between $2 million and $4 million a year."

"The Weekly Standard has been hampered by many of the same challenges that countless other magazines and newspapers across the country have been wrestling with," said Ryan McKibben, President and CEO of the Denver-based Clarity Media, in a Friday news release, citing "double-digit declines in its subscriber base all but one year since 2013."

"We worked hard to put out a quality magazine, and we had a good time doing so," former editor-in-chief Bill Kristol wrote on Twitter. "And we have much more to do. Onward!"

The Standard's status as an influential neoconservative publication with genuine cultural criticism was at its peak during the George W. Bush administration, when the magazine cheered on the U.S. invasion of Iraq. Some referred to the Standard as the administration's in-flight magazine of Air Force One.

But during the Trump Administration, some conservative and Republican readers turned away from the Weekly Standard, in response to its antipathy to the president. The Standard set itself apart from much of the rest of the other conservative publications, including including Fox News, Sinclair, Breitbart and the Washington Examiner, by writing about the president with skepticism and sometimes outright objection. For example, the magazine embraced the #NeverTrump Republican movement.

"It was the general view of... much of the editorial staff that he was unfit for office, largely as a result of his personal behavior and horrendous insults to, you know, John McCain's war heroism and various other things," one of the Standard's co-founders and contributing editor John Podhoretz told NPR on Sunday.

Podhoretz said the Standard's subscriber list may be incorporated into a soon-to-be-launched magazine connected to the Washington Examiner. "So in essence, it's being cannibalized, literally," he said.

On Saturday, President Trump celebrated the magazine's on Twitter, calling it "pathetic and dishonest" and naming its former editor-in-chief Bill Kristol. Kristol, who edited the Standard for more than 20 years, responded to the president with a tweet of his own.

The pathetic and dishonest Weekly Standard, run by failed prognosticator Bill Kristol (who, like many others, never had a clue), is flat broke and out of business. Too bad. May it rest in peace!

Others reveling in the Standard's end included far-right and Trump loyalist Rep. Steve King of Iowa, whose racist and white nationalist rhetoric the magazine often criticized. King tweeted on Sunday the president "is right on The Weekly Standard's deserved demise."

Last month, the magazine reported that King, who won re-election in November's midterms, made a racist comment comparing immigrants to "dirt."

King claimed the magazine was lying and called them "at the bottom of the lying journalistic gutter." Then the Republican dared the Standard to "release the full tape" — so the magazine did.

In response to King's Sunday tweet, Podhoretz called the politician "a foul, disgusting liar and a stain on American public life."

"The stench of your deceit and your views pollutes your district, your state, your party, and the United States," he wrote in a tweet.

Others across the political spectrum noted the magazine's shuttering signified a loss in the realm of intellectual conservative writing.

"This is what happens when corporate drones take over an opinion magazine, try to drag it down to their level and then grow angry and resentful when the people at the magazine try to maintain some sense of intellectual standards," wrote conservative commentator and former Standard editor David Brooks.

Franklin Foer, a staff writer at The Atlantic, wrote he enjoyed the magazine for many years with "a swirl of mixed sentiments." Foer was the former editor of the The New Republic, a liberal opinion magazine.

"The magazine itself combined high intellectual seriousness with the crass mentality of a political operative," Foer wrote. "It carried an amiable wit, albeit one that didn't always hit the mark. ... [co-founder] Kristol positioned his magazine as the ideological vanguard of American conservatism while never fully swearing allegiance to the movement."