Accessibility links
Sri Lankan Prime Minister Celebrates His Reinstatement As 'Triumph Of Democracy' Seven weeks after President Maithripala Sirisena sacked Ranil Wickremesinghe, the ousted premier got his job back. The move caps what has been a surprising showdown in the island nation. 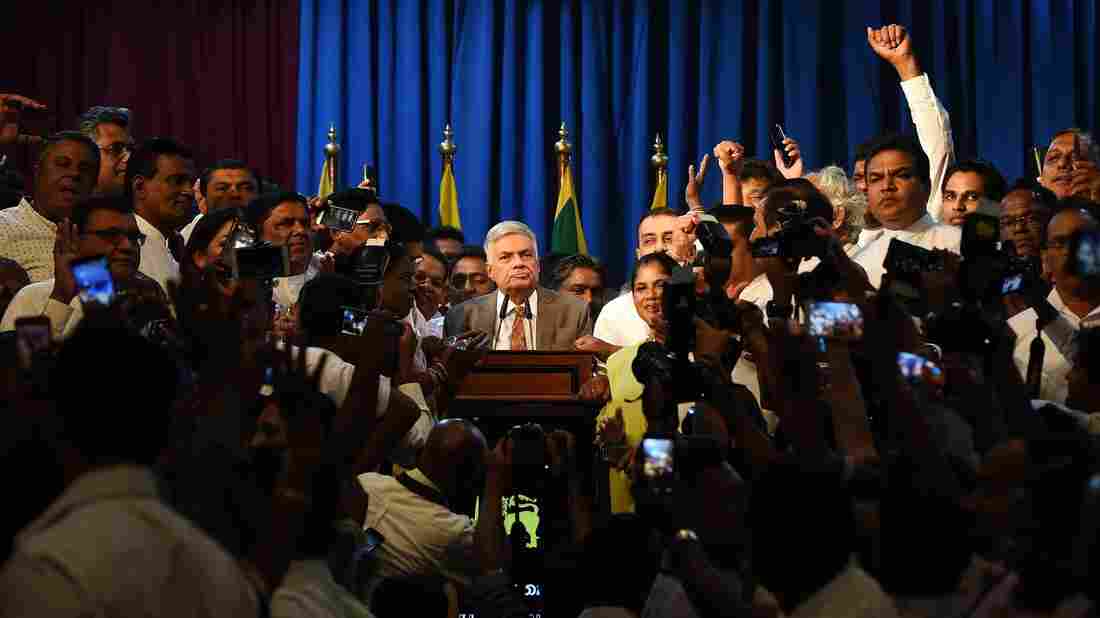 Ranil Wickremesinghe, seen behind the lectern, speaks to his supporters at the prime minister's official residence Sunday in Colombo. His reinstatement as prime minister concludes weeks of political chaos prompted by his firing. Ishara S. Kodikara/AFP/Getty Images hide caption 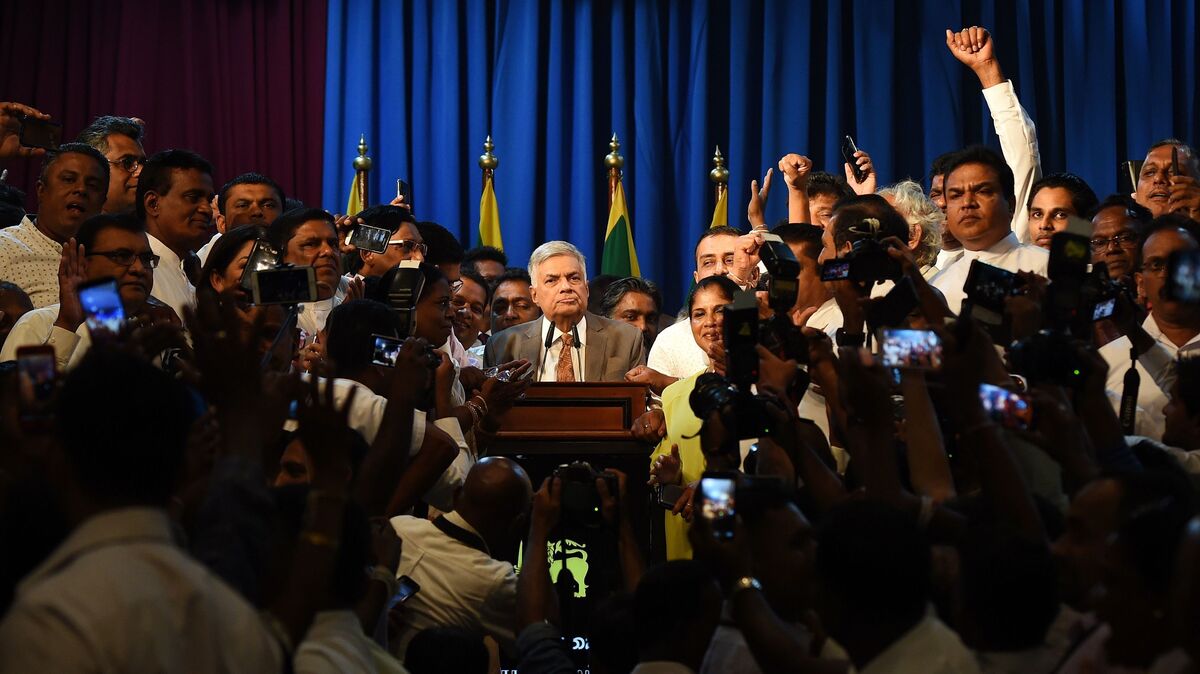 Ranil Wickremesinghe, seen behind the lectern, speaks to his supporters at the prime minister's official residence Sunday in Colombo. His reinstatement as prime minister concludes weeks of political chaos prompted by his firing.

More than seven weeks after the Sri Lankan president fired his prime minister, setting off a political maelstrom with the shocking decision, the saga appears to have reached a peaceful conclusion — by coming full circle.

On Sunday, President Maithripala Sirisena reinstated Ranil Wickremesinghe, the ousted prime minister who had never accepted his ouster anyway. The reinstatement came just one day after Mahinda Rajapaksa, his would-be replacement, relented to pressure from lawmakers and decided to step aside.

"Today marks a victory not for myself or for the UNP," Wickremesinghe tweeted Sunday, referring to his United National Party. "It is a victory for Sri Lanka's democratic institutions and the sovereignty of our citizens. I thank everyone who stood firm in defending the constitution and ensuring the triumph of democracy."

The weekend's events cap a turbulent couple of months for the South Asian island nation, which saw its premier shoved out by his erstwhile ally in late October. Sirisena's abrupt move came as a surprise to his critics in the parliament, who cast it as a power grab — only for Sirisena to deal them yet another surprise days later, by suspending the lawmaking body.

Amid the confusion, the president replaced his former running mate with the man the two had defeated in the 2015 election, Rajapaksa, a longtime strongman with a tarnished human rights record.

The move failed to achieve its aims, though. In fact, it failed to even dislodge Wickremesinghe from a prime minister's residence he refused to relinquish.

And when Sirisena sought to sack all of parliament, dissolving the body and setting a date for snap elections to replace them, the Sri Lankan Supreme Court stepped in to bar the attempt. The justices overturned his decree and reopened parliament last month — at which point lawmakers, upon reconvening, passed a motion of no-confidence against Rajapaksa.

The vote did little to ease the political tumult, however.

In the past seven weeks, the controversy manifested in fistfights on the parliamentary floor and deadly violence outside a government building. And all the while, Rajapaksa and Wickremesinghe each tried to wrest the premiership from his rival, even going so far as to establish parallel cabinets and power bases.

Eventually, Rajapaksa gave in and resigned Saturday — though not without first firing a parting rhetorical shot at Wickremesinghe.

"What is now gathering against the enemies of the country is a country-wide political force that no one can stop," he warned in a farewell speech, according to a translation by The Guardian.

The comment may portend still more political turbulence to come. After all, what was already a frayed relationship between Wickremesinghe and Sirisena, who remains in power, now lay in tatters. But at least for the moment, optimism prevailed.

"We believe that the statesmanship shown by the President, in ending this 50-day long political crisis, will continue in restoring the much needed mutual trust among all organs of the government," Champika Ranawaka, an ally of Wickremesinghe, said on Sunday. "It can be best achieved by discussion and consensus rather than by media statements!"