Accessibility links
Miss Universe Has Its First Trans Contestant — While Miss USA Stirs Criticism "I'm showing that trans women can be whatever they want to be: a teacher, a mother, a doctor, a politician and even Miss Universe," Miss Spain, Angela Ponce, said recently. 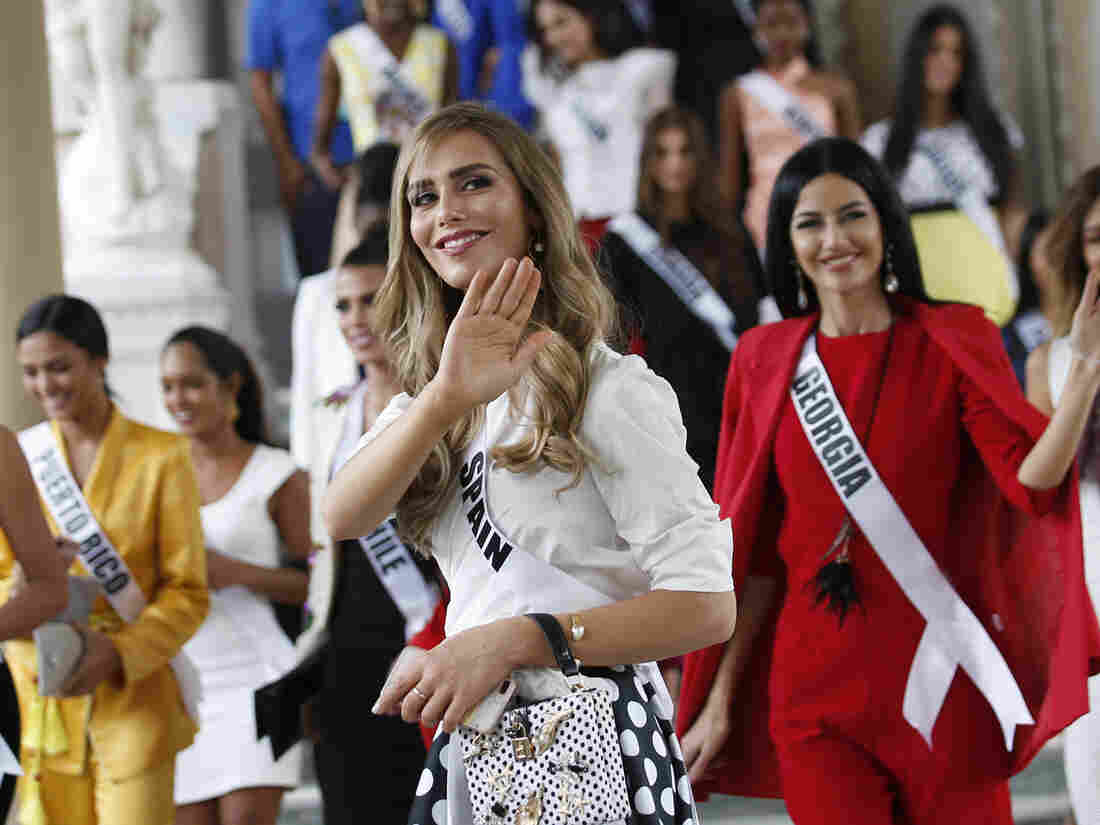 Angela Ponce, Miss Spain (center), is the first transgender contestant to compete for Miss Universe. She and other contestants are seen visiting the Government House in Bangkok last week. Narong Sangnak/AP hide caption 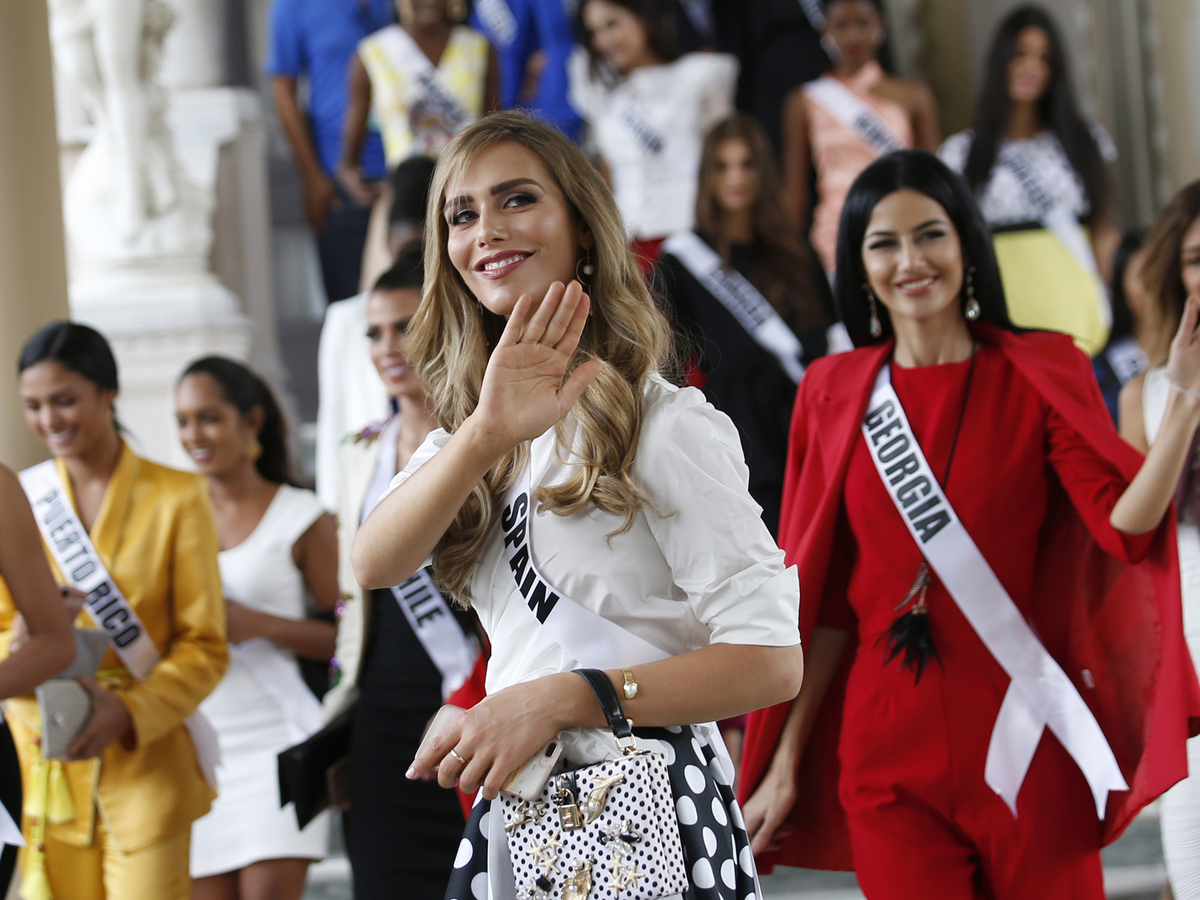 Angela Ponce, Miss Spain (center), is the first transgender contestant to compete for Miss Universe. She and other contestants are seen visiting the Government House in Bangkok last week.

But you missed a few happenings at the pageant in Bangkok, which crowned Miss Philippines, Catriona Gray, the winner Monday morning local time.

"Trans women have been persecuted and erased for so long. I'm showing that trans women can be whatever they want," Ponce told the Thomson Reuters Foundation. "I am proud to have the opportunity to use this platform for a message of inclusion, tolerance and respect for the LGBT+ community."

Ponce says she was all set to compete for the Miss World competition in 2015 when she learned that the pageant had a rule prohibiting trans women from winning.

"It crushed me," she said in an interview with Time last month. "I had to go on and perform, and it felt horrible. But after I got to the Miss Universe final, Miss World changed their rules too. I changed the rules."

Miss Universe lifted its ban on transgender competitors in 2012. The pageant, then owned by Donald Trump, changed its policy following blowback after Canadian officials disqualified a contestant when they learned she was trans. (The contestant, Jenna Talackova, was eventually allowed to compete in the Miss Universe Canada pageant, where she finished in the top 12.)

"I'm competing because it's what I've wanted to do since I was a little girl," Ponce told Time. "I'm showing that trans women can be whatever they want to be: a teacher, a mother, a doctor, a politician and even Miss Universe."

Ponce, 27, didn't make it past the first round of the competition, but she was feted with a special tribute during the finals. A video showed Ponce's path to the current moment, including her account of bullying she experienced as a child. At last, Ponce walked onto the stage and held her Spain sash aloft while she clutched her heart.

Miss USA says she is sorry

Meanwhile, Miss USA, Sarah Rose Summers, was criticized for remarks about two of her fellow contestants that struck some as condescending and xenophobic.

In an online video posted Wednesday, Summers and the contestants from Colombia and Australia talk about Miss Vietnam.

"She's so cute," Summers says. "And she pretends to know so much English, and then you ask her a question after having a whole conversation with her, and she goes [smiles blankly and nods]. She's adorable."

"Miss Cambodia is here and doesn't speak any English and not a single other person speaks her language. Can you imagine?" Summers says in another clip. "Francesca [Miss Australia] said that would be so isolating, and I said yes, and just confusing all the time."

A prominent fashion Instagram account, Diet Prada, shared the video and compared Summers to Mean Girls mean girl Regina George, writing: "This is basically what normalized xenophobia looks like. If she's trying to show empathy, the condescending, intolerant tone tells a different story. A reminder that you're participating in a competition in a country/continent where English is NOT the primary language."

Summers later posted a picture to Instagram in which she is hugging Miss Cambodia, Rern Sinat, and said she had learned from the experience.

"In a moment where I intended to admire the courage of a few of my sisters, I said something that I now realize can be perceived as not respectful, and I apologize," Summers wrote. "My life, friendships, and career revolve around me being a compassionate and empathetic woman. I would never intend to hurt another. I am grateful for opportunities to speak with Nat, Miss Cambodia, and H'Hen, Miss Vietnam, directly about this experience. These are the moments that matter most to me."

Late for the ball, but right on time for the grand tour

The best story from this year's pageant — and honestly, we have no idea how there is this much Miss Universe news — is the tale of a contestant who never stepped onto the stage.

Miss Sierra Leone, Marie Esther Bangura, had to travel to Ghana and then Nigeria to apply for a Thai visa. That took two weeks, and she arrived in Bangkok a few days too late to compete, according to the Bangkok Post.

But local Thais were sympathetic to her plight. One them gave Bangura a tour of Bangkok's temples and took photos of her posing in traditional Thai clothing.

A post shared by By IAMSL Pageant Agency (@missuniversesierraleone) on Dec 15, 2018 at 1:03am PST

"I always wanted to represent my country and that's why I tried so hard to be here," Bangura said, according to the Post. "Since I'm not competing, I still feel good because I got to meet people and learn new things. I know everything you go through you learn a lesson, and I've learned a lesson. I've met different people. I feel so much loved and excited."