Accessibility links
Trinidad Faces Humanitarian Crisis As More Venezuelans Come For Refuge Tens of thousands of Venezuelans have fled to the Caribbean country in recent years. Now Trinidad's government is adopting a harder line toward the newcomers. 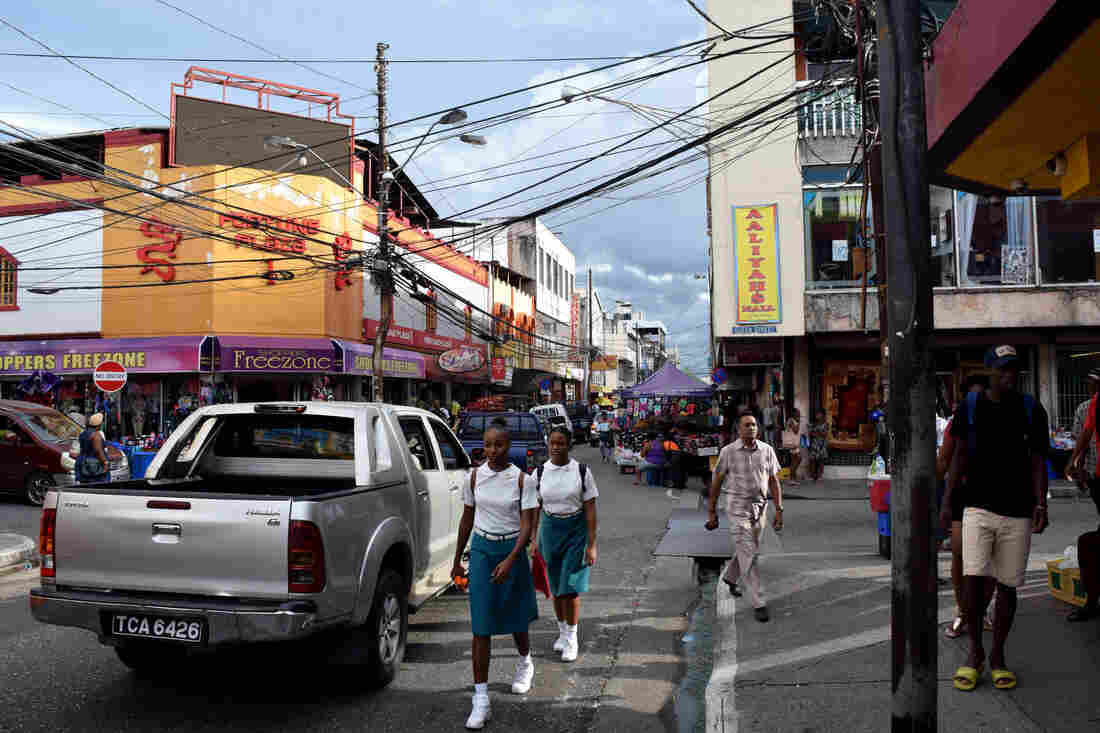 Schoolchildren on the streets of Port of Spain, Trinidad. Tens of thousands of Venezuelans have come to the Caribbean nation since their home country's economic and humanitarian crisis began to deepen in recent years. Jim Wyss/Miami Herald/TNS via Getty Images hide caption 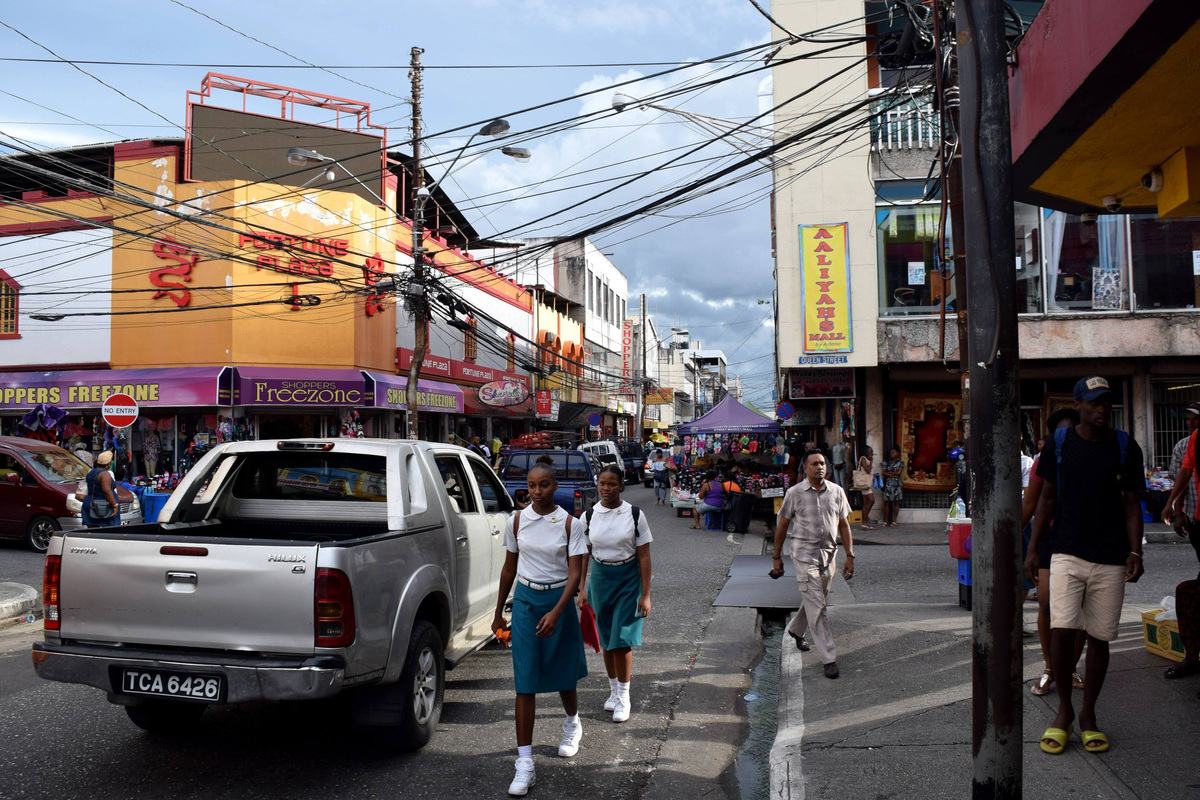 Schoolchildren on the streets of Port of Spain, Trinidad. Tens of thousands of Venezuelans have come to the Caribbean nation since their home country's economic and humanitarian crisis began to deepen in recent years.

When Reyna Cumberbatch climbed out of a boat and onto a deserted beach in the Caribbean twin-island nation of Trinidad and Tobago, she was nervous but deeply relieved.

Back in her home country of Venezuela, Cumberbatch, 23, had been worn down by hyperinflation, street crime and the daily struggle to eat in a country with chronic food shortages. She says the last straw was the cancellation of her computer programming classes at a technical school after nearly all of the professors emigrated.

In February Cumberbatch and about two dozen other Venezuelans who lacked passports paid a boat captain to smuggle them into Trinidad.

"Everything was falling apart," explains Cumberbatch who quickly found work as a custodian in a bar in the capital city Port of Spain.

The deep economic crisis afflicting Venezuela has prompted 3.6 million Venezuelans to flee, most since 2015, according to the United Nations. That's roughly 10 percent of the country's population. Most have crossed into relatively large, neighboring countries like Brazil and Colombia. But some are landing on tiny Caribbean islands just off Venezuela's coast, like Aruba, Curaçao and Trinidad.

Many Venezuelans enter Trinidad legally as tourists, then overstay their permits. Those who lack passports pay boat captains to take them ashore under cover of night. All told, Trinidadian officials estimate as many as 60,000 Venezuelans have recently settled in Trinidad, which has a stable economy thanks to its oil, natural gas and petrochemicals industries.

That might not sound like a flood. But Trinidad is only slightly larger than Rhode Island and is home to just 1.3 million people. Proportionate to its population, Trinidad has received more Venezuelans than almost any other country.

"We are seeing a huge wave of Venezuelans coming," says Michele Reis, a Trinidadian academic and an expert on migration. "We are on the verge of a humanitarian crisis."

As a result, Trinidad's government is now adopting a harder line toward the newcomers. Reis points out that it has ignored petitions from about 10,000 Venezuelans who have applied for refugee status, which would allow them to stay here legally. In April, authorities forcibly deported 82 Venezuelans, many of whom were seeking asylum.

Trinidad signed the 1951 Convention Relating to the Status of Refugees, which is the basis for international refugee law. But the U.N. high commissioner for refugees and human rights groups say the April expulsions were a serious breach of the convention. 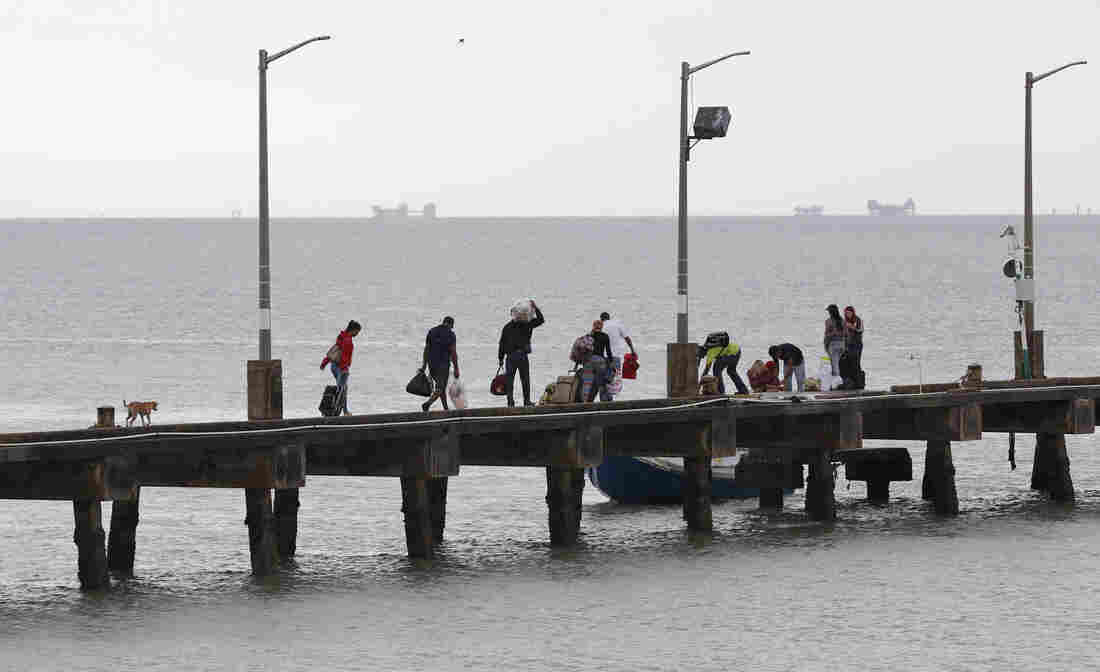 Venezuelan nationals from the city of Tucupita carry household goods that are scarce at home as they walk to board a private ferry back to their country, in the port of Cedros, southwestern Trinidad, June 8, 2016. Andrea De Silva/Reuters hide caption 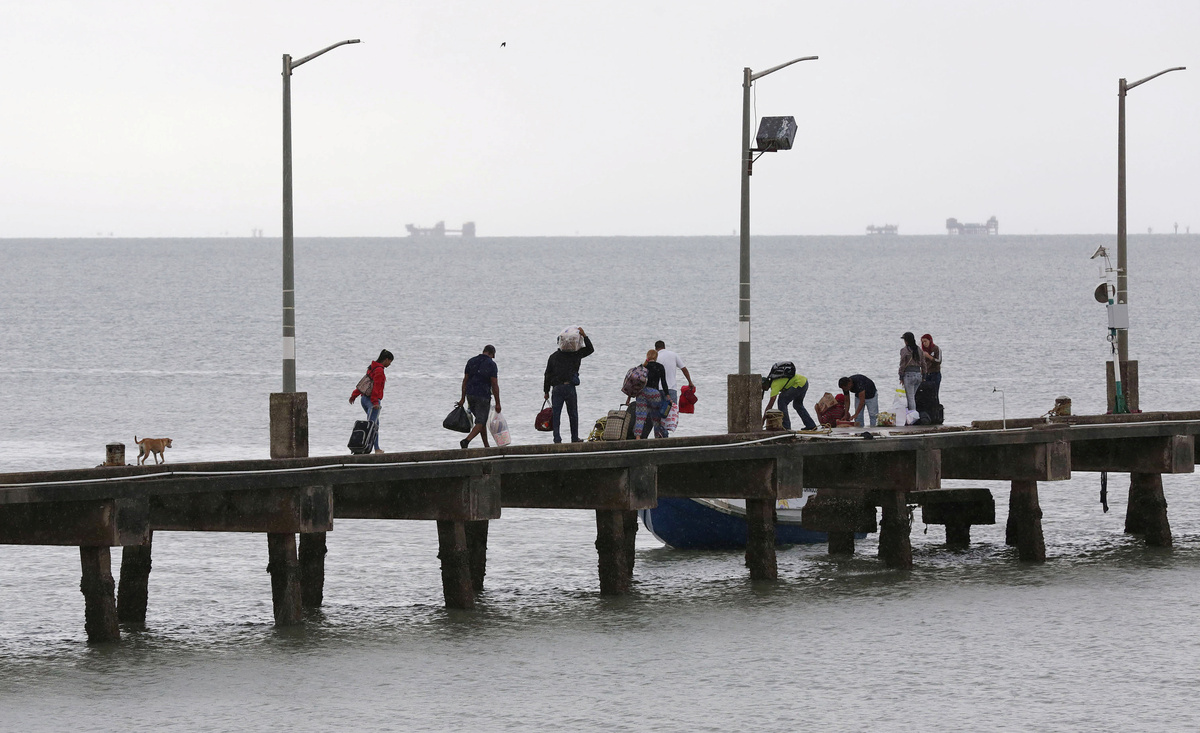 Venezuelan nationals from the city of Tucupita carry household goods that are scarce at home as they walk to board a private ferry back to their country, in the port of Cedros, southwestern Trinidad, June 8, 2016.

Trinidad "must respect the fundamental human right to seek asylum and never return people to countries where their lives or freedom are at risk," Erika Guevara-Rosas, Americas director at Amnesty International, said last month.

Trinidad's government did not respond to NPR's requests for comment. But in an April news conference following the deportations, Prime Minister Keith Rowley staunchly defended his policy.

"We are not in China. We are not Russia. We are not America," he said. "We are a little island — limited space — and therefore we cannot and will not allow the U.N. spokespersons to convert us into a refugee camp."

Opposition lawmaker Rodney Charles points out that Trinidad is a close ally of Venezuela's authoritarian regime and, in August, inked a natural gas supply deal with its much larger neighbor. He says Trinidadian officials fear that granting refugee status to Venezuelans would anger Venezuelan President Nicolás Maduro.

Trinidad's "message for Maduro is that we support him," Charles says.

For Many Caribbean Immigrants, It Wouldn't Be Christmas Without Black Cake

Many arrive in the fishing village of Cedros in southwestern Trinidad, which lies just 7 miles from the Venezuelan coast. That puts it within easy reach of people in eastern Venezuela who would otherwise have to travel hundreds of miles to cross the border into Brazil or Colombia.

One new arrival is Noris Benavente, who used to get by growing tomatoes and chili peppers in Venezuela but gave up due to a lack of farm supplies. She is met near the dock by her son, who moved here two years ago, and his Trinidadian wife. Immigration officials stamped Benavente's passport with a 30-day permit but she has other ideas.

"People here have food," she exclaims as she takes a look around Cedros. "If I like it here maybe I will stay."

Once settling in, Venezuelans often try to coax family members to join them.

In the central town of Couva, 11 members of the Tovar family have squeezed into a two-bedroom house. Some work washing dishes or unloading cargo trucks for about $500 a month — far more than the $5 they would earn back in Venezuela, where the currency has collapsed. 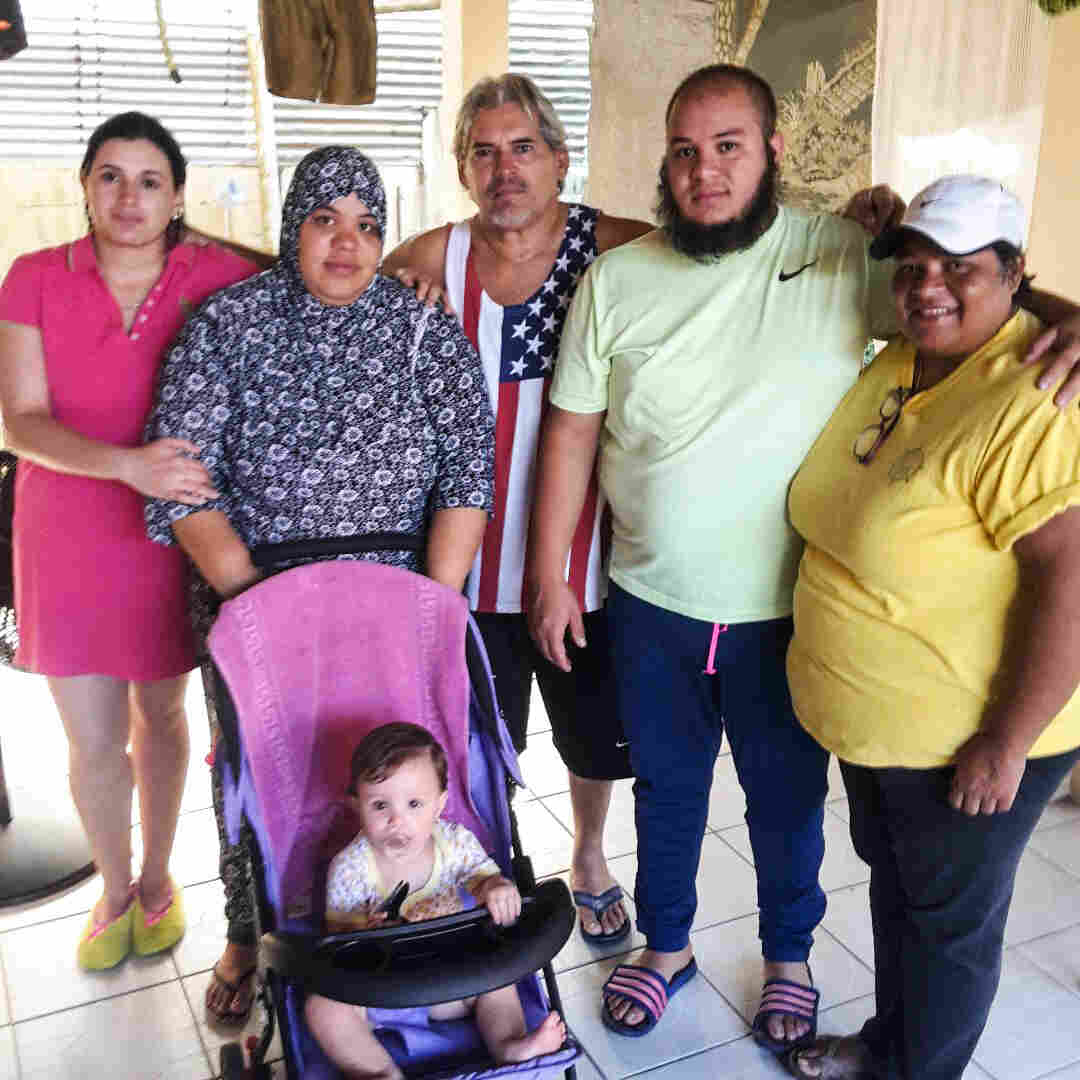 Members of the Tovar family, recent Venezuelan immigrants in Trinidad. Eleven of them live in a cramped two-bedroom house in the Trinidadian town of Couva. John Otis for NPR hide caption 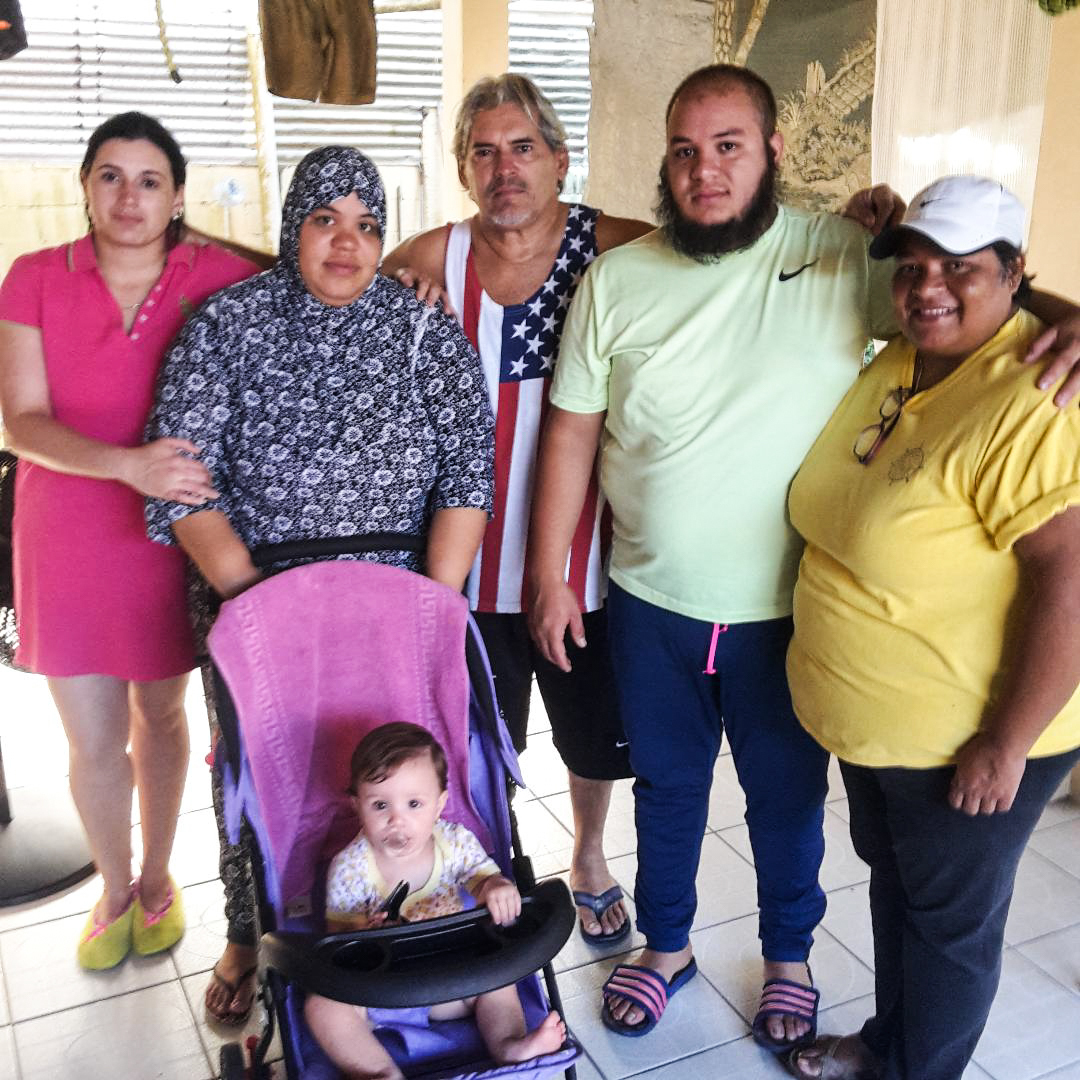 Members of the Tovar family, recent Venezuelan immigrants in Trinidad. Eleven of them live in a cramped two-bedroom house in the Trinidadian town of Couva.

Still, Samuel Tovar, a 28-year-old chef from Venezuela's capital Caracas, feels like an outcast — unable to speak much English and eyed with suspicion by Trinidadians fed up with the rising number of immigrants. He and his relatives have applied for refugee status but have heard nothing. He chokes up recalling how he was jailed over the Christmas holiday last year for overstaying his tourist permit.

This legal limbo affects nearly all facets of life. It makes it easier for employers to get away with underpaying migrants. Their children are sometimes rejected when registering for school.

Cumberbatch, the bar worker who was smuggled into Venezuela in February, was recently injured in a motorcycle accident and pulls up her shirt sleeves to reveal several ugly scars. But she refused to seek hospital treatment.

"I would have been arrested because I am here illegally," she says.

Venezuela Trudges Ahead With Risky 'Gold Rush' Despite Sanctions

Back on the beach at Cedros, Annette, a Trinidadian housewife, has tears in her eyes. She has been been taking care of two Venezuelan girls, ages 11 and 12, who were left behind when their mother was deported nine months ago.

"We saw the hardship of what these girls were going through," she says. "We just wanted to help them."

With consent from the mother back in Venezuela, Annette has been attempting to adopt the girls. So far she's run into bureaucratic roadblocks. (She doesn't want to give her last name to avoid hassles from government officials.) She plans to keep trying but, for now, must say goodbye.

"Today the kids have to return because I have no extension for them. Their time is up to stay in Trinidad," says Annette, adding that they will return to live with their mother.

Shortly afterward, the girls board a boat for Venezuela.