Accessibility links
U.S. Deports Dozens More Cambodian Immigrants, Some For Decades-Old Crimes Many were granted refugee status after fleeing U.S. bombing during the Vietnam War and the massacres of the Khmer Rouge, and know little about the country where they're being forced to return. 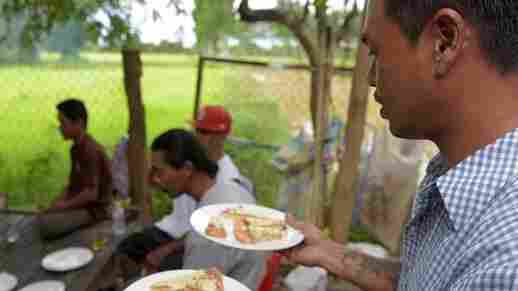 Nheb Thai, a Cambodian refugee who was deported from the U.S., serves a meal to other deportees in Battambang last year. Cambodia has taken in 566 deportees since inking a 2002 pact with the U.S. that opened the door for hundreds with criminal records to be repatriated. Tang Chhin Sothy /AFP/Getty Images hide caption

A flight chartered by U.S. Immigration and Customs Enforcement is said to have departed Monday from El Paso, Texas, carrying about three dozen Cambodian immigrants who came to the U.S. legally, but were ordered deported for having committed a crime.

The group, expected to land in the Cambodian capital Phnom Penh on Wednesday, was to include about 46 people, according to an official who spoke with The New York Times on the condition anonymity. While ICE did not confirm the flight to NPR, an agency spokesman said in an email that it was not its policy to comment on "removal flights due to operational security."

However, refugee advocates and civil rights groups have confirmed this latest deportation to NPR. NPR spoke with and exchanged emails with groups that work with Cambodians and other Southeast Asian immigrants in the country legally, yet who are under threat of deportation as the Trump administration continues to deport noncitizens who've committed crimes.

The group that flew from Texas on Monday is made up of mostly men and a handful of women, according to Anoop Prasad, senior staff attorney with Asian Americans Advancing Justice – Asian Law Caucus, a legal and civil rights organization based in San Francisco. He said his organization represented six clients who were slated to be on that flight. One ended up going, while the other five got last-minute reprieves from their deportation orders, said Prasad.

"Almost everyone is leaving family behind," he said. "Almost no one has surviving family in Cambodia."

"Many [of those being deported] were born in refugee camps," Mariategue said. "They don't speak the language, it's really hard to imagine a means of survival, especially because they don't know the culture."

Not everyone objects to the deportations.

"When you commit crimes it's not up to you anymore," Mark Krikorian, executive director of the Center for Immigration Studies, told NPR. "It's an unfortunate situation, but that's the way it is. They've violated the deal we made with them when we let them in."

The U.S. Immigration and Nationality Act outlines how non-U.S. citizens may be deported back to their country of origin, even if they're in the country legally. "Violation of law" is listed as a deportable offense.

The U.S. has been repatriating Cambodian immigrants since 2002, when an agreement was inked between Washington and Phnom Penh that said Cambodia would accept deportees.

That deal fell apart last year, prompting the Trump administration to impose visa sanctions on some Cambodian officials and families. The two governments eventually worked out a new agreement in early 2018 and Phnom Penh began accepting Cambodian nationals, this time in even greater numbers than before.

"As a result of these sanctions and ongoing diplomatic efforts, removals to Cambodia increased 279 percent from Fiscal Year 2017 to Fiscal Year 2018," ICE spokesman Brendan Raedy told NPR in an email.

"Despite this progress, as of September 17, 2018, there were still 1,855 Cambodian nationals present in the United States with a final order of removal, of whom 1,362 were convicted criminals," Raedy said in an email to NPR.

Last week the Trump administration said it would step up efforts to pressure Vietnam to repatriate some of its immigrants who've committed crimes. Like the Cambodian immigrants, many Vietnamese were resettled in the U.S. during and after the Vietnam War, said Melanie Kim, an attorney with Asian Americans Advancing Justice – Asian Law Caucus.

Many of these people fled the trauma of U.S. bombings and the horrors of the Khmer Rouge regime, she told NPR.

In some cases, the crimes for which these individuals are being deported were committed long ago. Doris Meissner, a senior fellow at the Migration Policy Institute, told NPR, "these are not people who haven't been held accountable, these are all people who've gone through the criminal justice system, they have paid their debt to society."

"It is true you are subject to deportation [if you break certain laws]," said Meissner, who headed the Immigration and Naturalization Service from 1993 to 2000. But it's not the same as what is depicted as "criminals on the loose" by the Trump administration, she said.

Some Cambodian immigrants have been able to stay in the country. NPR has reported that the ones who are deported often have difficulty finding jobs and fitting in because they aren't familiar with the culture or speak Khmer, the native language in Cambodia.

Out of the hundreds who have been sent to Cambodia since the country started accepting deportees, only one has managed to return to the U.S. thanks to a court error.

For Some Cambodian Refugees, Deportations And A Return To A Country They Fled