Accessibility links
Emily Blunt's 'Mary Poppins' Is As Magical And Mysterious As Ever When she landed the role in Mary Poppins Returns, Blunt didn't rewatch the 1964 original. "I didn't want to sort of get compromised by the details of what Julie Andrews did so beautifully," she says. 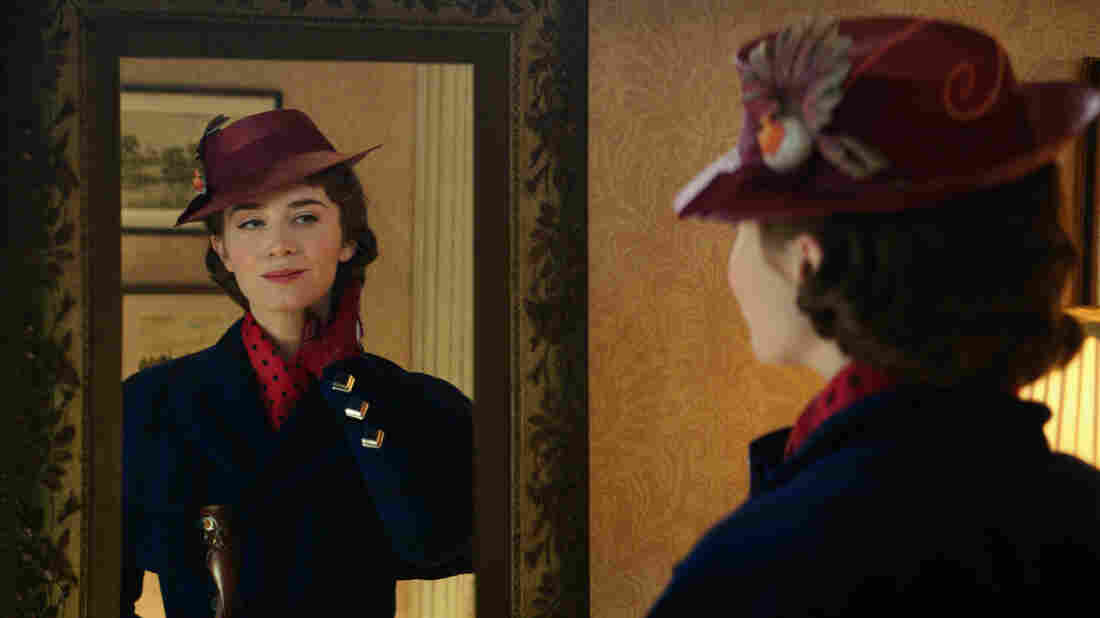 Mary Poppins (Emily Blunt) is back in service at the Banks' home in Mary Poppins Returns, a sequel to the 1964 classic. Courtesy of Disney hide caption 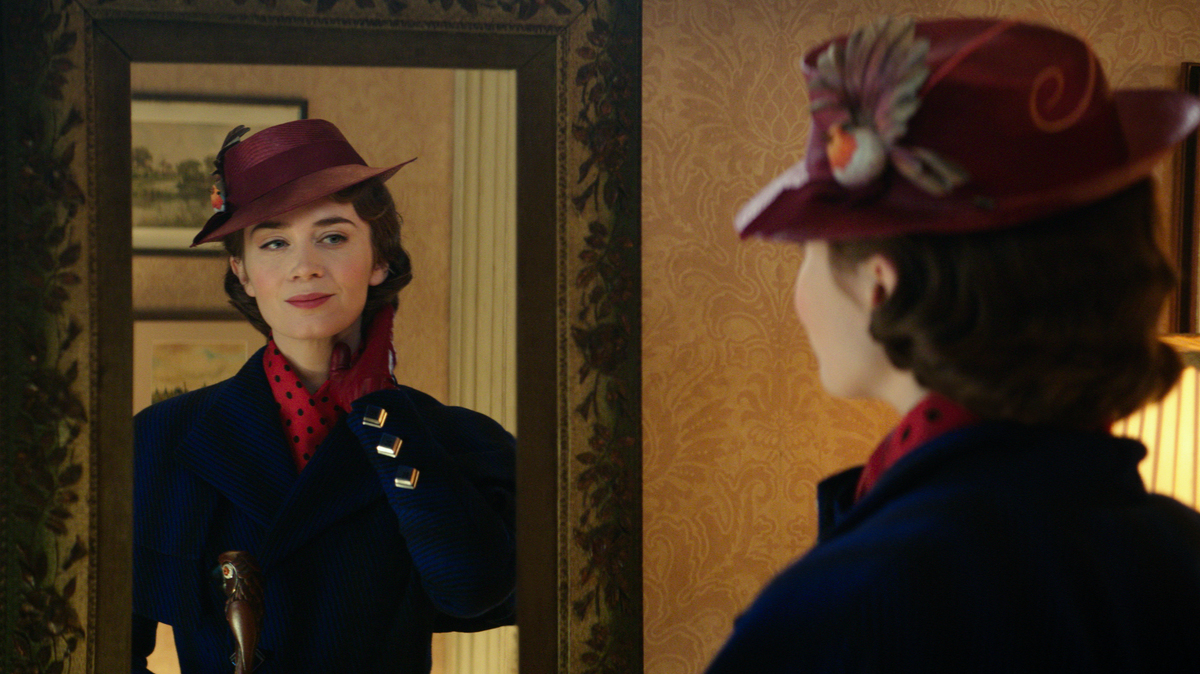 Mary Poppins (Emily Blunt) is back in service at the Banks' home in Mary Poppins Returns, a sequel to the 1964 classic.

When Emily Blunt landed the title role in Mary Poppins Returns, she made a conscious decision not to rewatch the 1964 version of the film, which featured Julie Andrews as the iconic nanny. Instead, Blunt dove into the books by P.L. Travers, from which the film had been adapted.

"I didn't want to sort of get compromised by the details of what Julie Andrews did so beautifully," Blunt says. "I knew it was going to be my version of her."

Blunt says that Travers' books became "a very evocative source" for re-imagining the beloved nanny. As she read them, she came to understand Mary Poppins as a mysterious character who simultaneously connects with people and holds them at arm's length.

In Mary Poppins Returns, the nanny floats down from the sky and into the life of a new generation of the Banks family. Her former charge Michael is now a widower struggling to raise three young kids on his own. Mary's arrival — and her friendship with a lamplighter named Jack (played by Lin-Manuel Miranda) — suffuses the family with the joy and the discipline they desperately need.

"She is practical and yet fantastical and fastidious and yet really eccentric," Blunt says. "I think she rather likes that she's a mystery. She takes a lot of joy in that no one can figure her out."

On floating down from the sky

[It was] quite terrifying, I think. I thought I was all right with heights, and then as [I went] past 30 feet, 40 feet, 50 feet, you're suddenly at 60 feet and you realize you're terrible with heights, and Lin-Manuel Miranda was like the size of a pea suddenly.

I found the easiest thing to do when I was that high was just to look upwards to the sky, because then I had no frame of reference for just how high I was, because I was at that point above the trees and Lin was tiny. And I thought for a second, "This might be how I go. This is how I go — dressed as Mary Poppins." ... Because it's just one wire, and you'll think, "Who's holding the wire? And do I know them even?" You literally have your life in a burly stuntman's hands.

It's not that I had to sort of do dialect lessons, you know. I mean, I can do various different accents from England. You know, it just makes me laugh that Mary Poppins is even posher than my mother. ... I think for Mary Poppins [the accent] needed to be a pretty exaggerated version of that [posh accent], because of her imperious nature but also [because] she should sound practically perfect. And also, it's set in the '30s, which was a very specific sound. Funnily enough, I listened to Princess Margaret quite a lot for how she spoke, and then I just sort of winged it. I walked around the house many nights in a row until an accent or a voice sounded right.

On working with a vocal coach

It's sort of essential actually for me, because I have not been trained as a singer and they do give you the sort of confidence and the tools to assist you. I think it was easier for me with Mary Poppins. I mean, Stephen Sondheim, his music requires all of you, it is the deep end of musical theater. But Mary Poppins for me was a more slow burn, tailor-made experience, because the songs were written with me in mind, with my abilities in mind, and the songwriters and composers, they really learned my voice and what I could do and what I couldn't do. And so by the time I started singing them on set, I mean, I'd been working with this music for over a year by that point.

On what she learned from working with director Rob Marshall

When I auditioned for Into the Woods, which — I went into that room my knees knocking — I just have always loathed singing in front of people. I really like doing it privately but just not in front of people, and I went in to audition and I said, "Rob, I'm very, very nervous." I said, "I don't like singing in front of people." And he said, "I'm not interested in singers who can kind of act. I want actors who can kind of sing." And he said, "So I just want you to tell me a story and stop worrying about making it sound pretty, but tell me your story as this character."

I think the singers that we all respond to and fall in love with are the ones that evoke a story and the ones that make you feel something.

And that's, I think, what I learned, is that I think the singers that we all respond to and fall in love with are the ones that evoke a story and the ones that make you feel something. It's not just about listening to vocal gymnastics; it's about telling a story that moves people. So that's sort of what I tend to focus on now, and not worry about how it sounds — and it always sounds better if I stop worrying about how it sounds.

On having a stutter when she was young

It was very bad. It got progressively worse. It was not so bad when I was younger. By the time I was sort of 12, 13 it was probably at its peak. It is and it was — and still is for many people who suffer with it — it is a condition that people tease [about], because you sound funny and you look funny when you stutter. You're trying to force words out so everything contorts. ...

I did grow out of mine, and I think a lot of it was to do with this extraordinary teacher I had who encouraged me to do a class play. I said, "I don't want to," and he said, "Well, I think you're very funny and I think that you are very good at voices, you do silly voices and you don't stutter when you do a silly voice. So why don't you do a silly accent or something?" That's probably why I've always been really fascinated by changing my voice depending on the role, because it was a way of unlocking me.

On auditioning for The Devil Wears Prada, which became her breakout role

I was out in L.A., which I found altogether overwhelming because it was very new and I was 22, I think, and I was auditioning at Fox Studios for something else and then they just threw these sides at me and they said, "Actually, will you just read for this other thing, if you're here. Can you just read for it? It's called The Devil Wears Prada."

I remember feeling really nervous, because I was going to miss my flight. And so I think because of the anxiety I probably felt about being late — which I loathe being late in general — I think in some ways that worked, because I had a sense of fretful energy about me anyway, and that rather worked for this anxious, fractious, starving assistant I was playing. ... I think the ones that you care less about are the ones that you get.