Accessibility links
Trump Foundation To Dissolve Amid New York Attorney General's Investigation The New York attorney general's office detailed what it called "a shocking pattern of illegality" and said the foundation's decision to shutter was "an important victory for the rule of law." 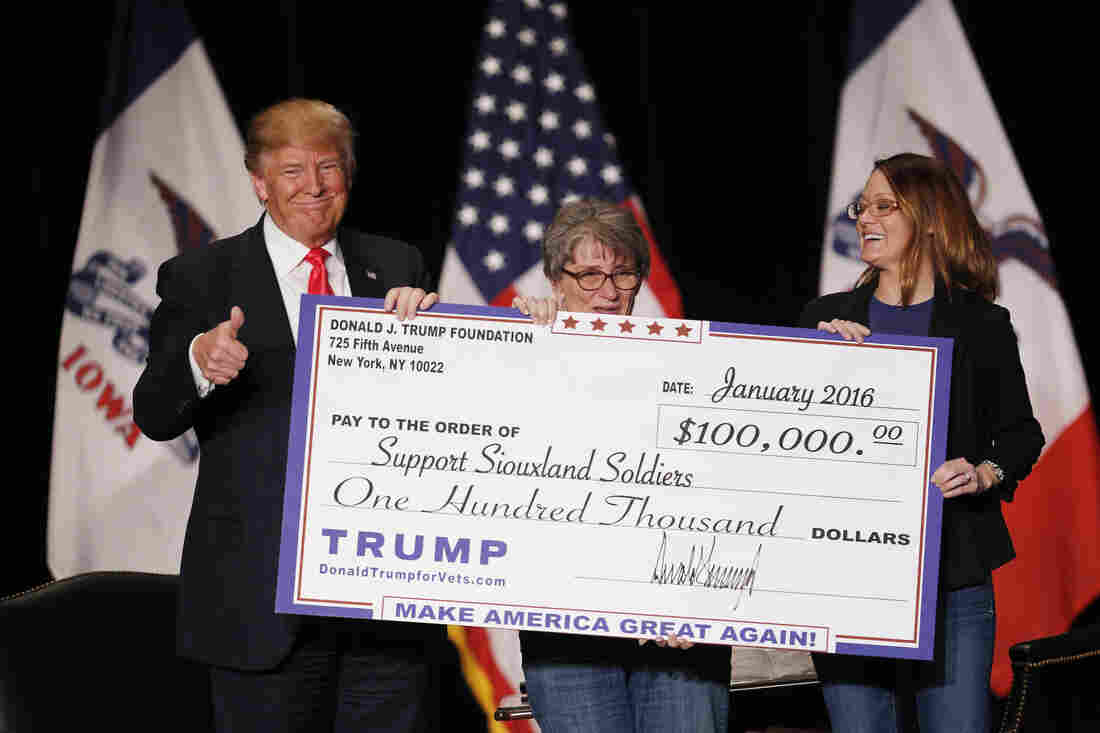 Donald Trump awards a $100,000 check to a veterans charity in Sioux City, Iowa, during a 2016 event. His use of the Trump Foundation during the campaign raised legal questions about its activities. Luke Sharrett/Bloomberg via Getty Images hide caption 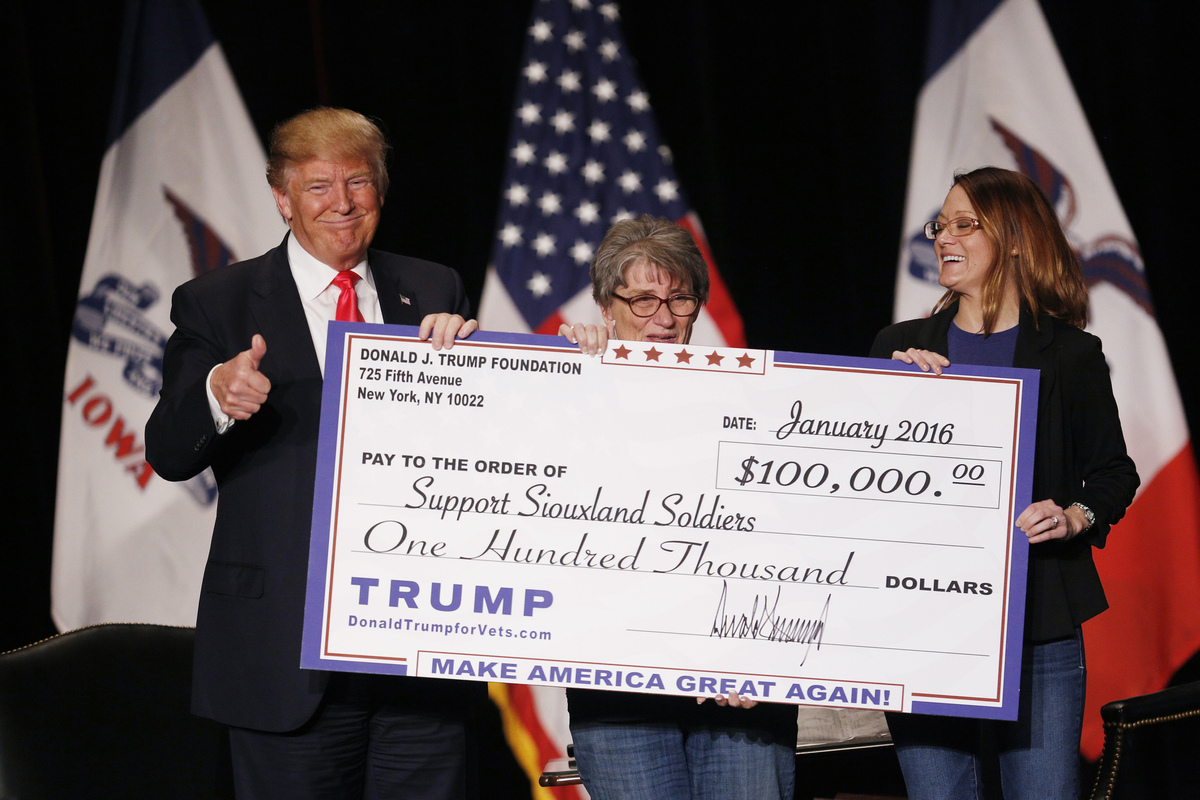 Donald Trump awards a $100,000 check to a veterans charity in Sioux City, Iowa, during a 2016 event. His use of the Trump Foundation during the campaign raised legal questions about its activities.

New York Attorney General Barbara Underwood has announced that the Trump Foundation will dissolve. The foundation was established by Donald Trump well before he ran for president.

The news comes as her office continues its investigation into various questions about the foundation's conduct, including whether the foundation broke the law by coordinating with Trump's 2016 presidential campaign and whether it was truly functioning as a charitable organization.

Underwood said her office had detailed "a shocking pattern of illegality involving the Trump Foundation — including unlawful coordination with the Trump presidential campaign, repeated and willful self-dealing, and much more. This amounted to the Trump Foundation functioning as little more than a checkbook to serve Mr. Trump's business and political interests."

Underwood said the foundation's decision to shutter was "an important victory for the rule of law."

The foundation agreed to dissolve under the supervision of a judge. Underwood's office will supervise the disbursement of the foundation's remaining assets to charities. The New York attorney general's office will continue its lawsuit against the foundation and is seeking millions in restitution and penalties, and it also seeks to bar Trump and his children from serving on the boards of other New York charities.

In late 2016, Trump said he wanted to dissolve the foundation but was prevented by then-New York Attorney General Eric Schneiderman as the investigation into the charity continued.

Alan S. Futerfas, a lawyer for the Trump Organization, issued a statement saying "the Foundation has been seeking to dissolve and distribute its remaining assets to worthwhile charitable causes since Donald J. Trump's victory in the 2016 Presidential election. Unfortunately, the NYAG sought to prevent dissolution for almost two years, thereby depriving those most in need of nearly $1.7 million."

The investigation was spurred by a series of reports in The Washington Post about the foundation's activities, which suggested the foundation did little, if any, actual charitable giving and had a pattern of helping Trump's business and political ambitions.

The foundation was established in the 1980s but first drew intense scrutiny after a January 2016 event in Iowa featuring then-candidate Trump. Trump had boycotted a Republican presidential debate and held what he described as a fundraiser for veterans instead. Several other GOP candidates also attended the event.

Trump claimed that he personally donated $1 million to veterans' charities. Subsequent reporting from The Post's David Fahrenthold could find no corroboration for that claim. Over time, his reporting turned up more evidence that the Trump Foundation was in violation of numerous laws. Fahrenthold won a Pulitzer Prize in 2017 for his reporting on the foundation and Trump's charitable contributions.

Citizens For Responsibility and Ethics in Washington Executive Director Noah Bookbinder said, "It is good to see this fraud is finally over." CREW had filed complaints calling for investigations into the foundation.

Underwood sued the foundation in June, saying it repeatedly solicited money from donors and then used it for campaign-related purposes, violating federal election law. The money also was used to benefit Trump's business interests by settling legal claims against it, for example, Underwood said.

Underwood also said that Trump's three oldest children — Donald Jr., Ivanka and Eric — had exercised no real control over the foundation's activities, despite being nominal board members.

In its most recent available filing with the IRS, in 2016 the foundation reported $2,929,274 in revenue and $3,075,269 in expenses. Most of the foundation's donations that year went to veterans groups, following a campaign promise made by Trump while campaigning. The foundation also donated $25,000 to Florida Attorney General Pam Bondi, according to CREW, in an apparent effort to dissuade her from investigating Trump University, another now-shuttered Trump venture.

NPR's Brett Neely and Peter Overby contributed to this story.