Accessibility links
'The Disasters' Could Be The Beginning Of A Great Story M.K. England's new novel starts with a bang: A group of space-school rejects must save the universe. It never quite delivers on that premise, but the characters are so appealing, you'll want more.

'The Disasters' Could Be The Beginning Of A Great Story

'The Disasters' Could Be The Beginning Of A Great Story 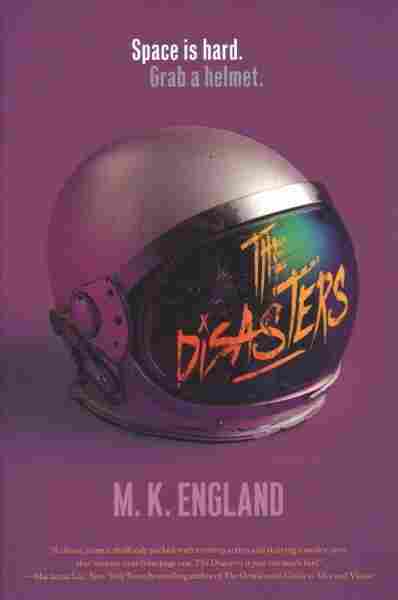 The Disasters kicks off with a high-concept punch: A group of space-school rejects band together to save the universe. It's the stuff of old-timey space serials with a modern update, featuring a crew of diverse misfits wrestling with rejection and the choices that got them into this mess in the first place.

Nax knows that Ellis Station Academy is his one shot at fulfilling his dream of becoming a space pilot and making the one-way trip from Earth to the colonies. He's put in the hours. He's got the skills. But then he screws up on his first day and finds himself on a shuttle about to toss him back to Earth, along with three other kids who also didn't make the cut.

But before he and the three other washouts can be sent home in shame, an unknown force takes control of the Academy and kills everyone aboard. Nax and his new companions escape by stealing the shuttle and making an unauthorized jump out to the colonies with their enemies in hot pursuit — for they are now the only witnesses to a crime, a crime that will remain a secret unless they can get the word out.

Crash landing on one of the colonies leaves them in a bind, especially once they realize that they're being made into scapegoats and can expect no help from anyone in charge. When a mysterious girl with a vendetta against her crime-lord stepfather saves them from capture, they realize that the conspiracy they're up against runs deep, and if they can't get the word out in time, the lives lost on Ellis Station will only be the tip of the iceberg. The solution is clearly to steal a ship, become her fearless crew, and save the universe. But that's only going to work if Nax doesn't do what he does best: Crash and burn.

The Disasters propels us through a high-stakes space adventure escapade through sheer force of its narrator's personality. Nax is a hotshot flyboy refreshingly lacking in the machismo and devil-may-care confidence of his archetype. He may be the best pilot this side of the colonies, but he doubts every move he makes and inwardly cringes when the rest of the crew make him captain by assumption. He takes daring chances and then frets over internal risk assessments, falls in love with half his crew, and is generally the sort of charismatic bisexual cinnamon roll (a fandom term for a sweetheart character who faces more hardship than they deserve) that's going to inspire a lot of fan art.

It is a bit of a shame, though, that Nax is the only one who gets a point of view. As likable as he is, I find myself more intrigued by the rest of his crew — girl genius Case, aspiring doctor Zee, smooth-talking Rion, and techie Asra. The plot zips along so quickly, we never really get much chance for them to settle into being multi-dimensional people who explore the bounds of space together. There is a golden moment of promise, when the crew finally assembles on their newly christened ship and it suddenly feels like the ensemble space adventure is poised to truly begin. But it comes a bit too late, and we have to swerve right back into the save-the-universe plot, dashing from here to there, with no real time left to develop into a fully-fledged heist or discovery mission.

I wasn't entirely here for the origin story, but I'm interested to see where this ragged band of space-school rejects go next.

This is not the only way that The Disasters doesn't entirely commit to its potential. The book has such an interesting premise — a world where people can emigrate to the far reaches of space, but if they do, they can never come back home again. Each colony world has its own unique landscape, brimming with worldbuilding possibilities. But even though this story is set in the future, the pop culture references, turns of phrase, and details feel very much of our current world. Perhaps this will make The Disasters more accessible for some readers, but for me, it felt like a missed opportunity to show us something more exciting.

In some ways, I think this sort of expansive world and character ensemble storytelling is better suited to a more serial format than a novel can provide. The fact that the book loops back to end at that golden moment of promise I mentioned, with a motley crew and a ship to call their home, gives me hope — if this becomes a series. I wasn't entirely here for the origin story, but I'm interested to see where this ragged band of space-school rejects go next.