Accessibility links
Democrats Can't Avoid Identity Politics In 2020 Facing a crowded primary in 2020, Democratic presidential candidates may not be able avoid identity issues in a Democratic party that is increasingly the party of nonwhites and white liberals. 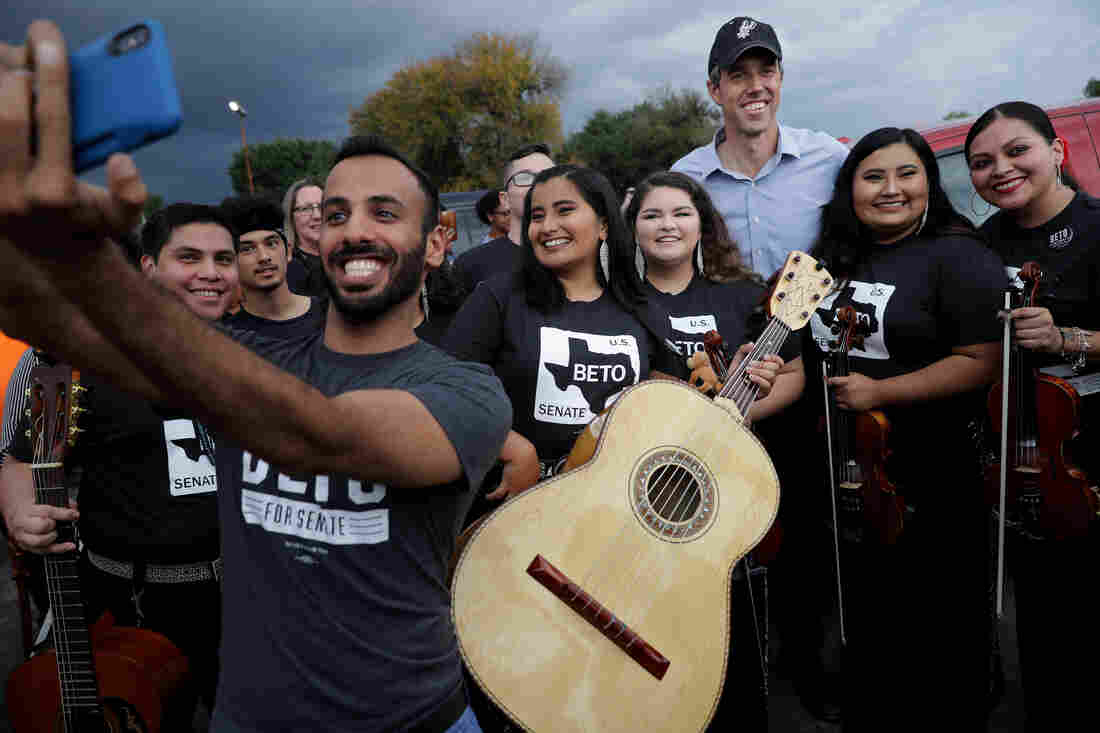 Then-U.S. Senate candidate Rep. Beto O'Rourke (D-Texas) poses with members of a mariachi band during an October 2018 campaign rally in San Antonio, Texas. O'Rourke is one of a score of Democratic politicians talking more explicitly about issues of race than previous generations of Democrats. Chip Somodevilla/Getty Images hide caption 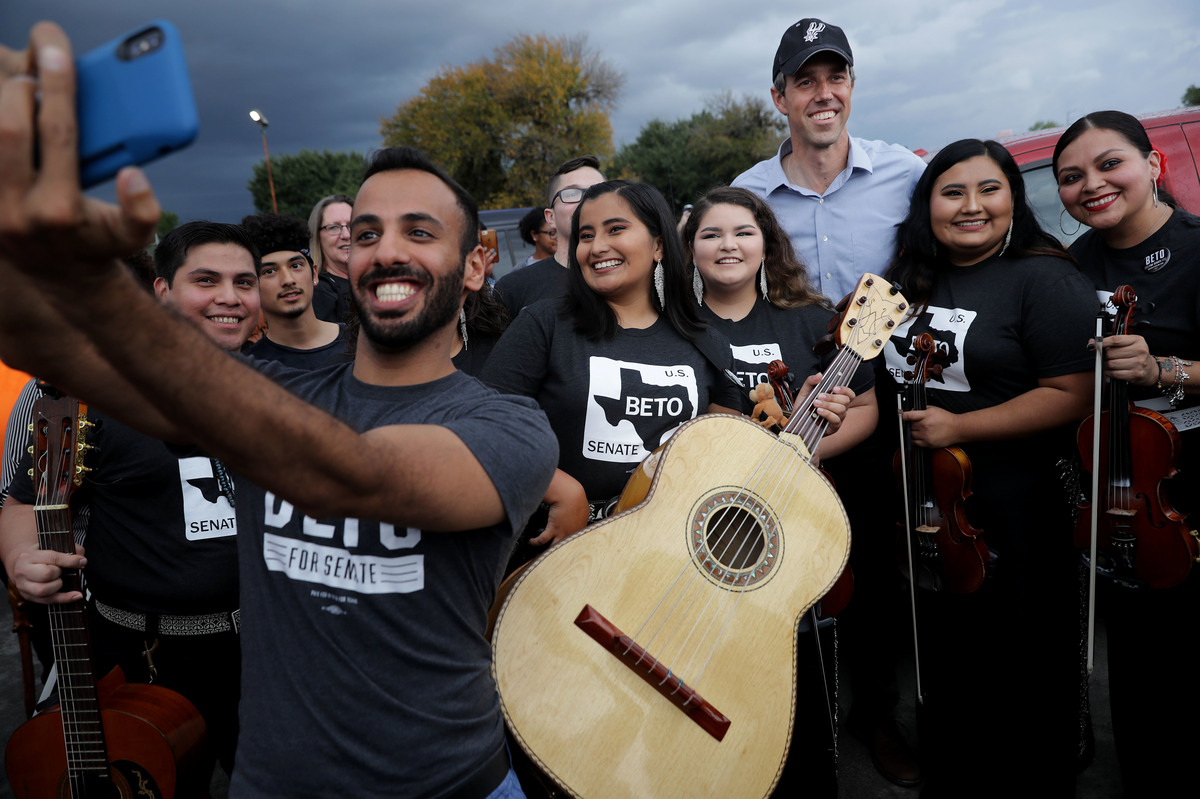 Then-U.S. Senate candidate Rep. Beto O'Rourke (D-Texas) poses with members of a mariachi band during an October 2018 campaign rally in San Antonio, Texas. O'Rourke is one of a score of Democratic politicians talking more explicitly about issues of race than previous generations of Democrats.

When Democratic politicians talk about race, they sound fundamentally more liberal than their party did a decade ago. That isn't limited to black leaders who've become rising stars in the party, like California Sen. Kamala Harris and New Jersey Sen. Cory Booker.

Some of the white men considering a run for president in 2020 are also talking about identity, voter suppression, and the criminal justice system in a way that's a big departure from how Democrats talked about those issues less than a decade ago.

At a town hall in August, then-Texas Senate candidate Beto O'Rourke, who's now contemplating a run for the White House, gave a response to a question about NFL players kneeling during the national anthem that went viral.

"My short answer is - no, I don't think it's disrespectful," said O'Rourke, before adding a more nuanced explanation, pointing to the country's history of nonviolent protests during the civil rights movement from the Woolworth lunch counter to the Edmund Pettus bridge.

And after the midterm elections in Georgia, where Democrat Stacey Abrams narrowly lost to Republican Secretary of State Brian Kemp, Ohio Sen. Sherrod Brown accused Kemp and the Republican Party of voter suppression.

"If Stacey Abrams doesn't win in Georgia, they stole it. It's clear," Brown said at a gathering of the National Action Network, a civil rights organization founded by Al Sharpton.

O'Rourke and Brown are indicative of a broader reality. Most Democrats considering a run for president in 2020, whether they're brown, black or white, are talking about race more frequently and frankly than their predecessors.

This might be a moral or personal decision, but it's also a strategic one that reflects the changing Democratic electorate. In 1996, three-quarters of registered Democratic voters were white, according to the Pew Research Center. By 2017, that number had shrunk to 59 percent. As white conservatives have abandoned the Democratic party, studies show there is a growing liberal consensus around issues of race and immigration among the white voters who've remained.

"The Democratic Party is increasingly a party of nonwhites and white racial liberals," said Michael Tesler, co-author of the book Identity Crisis: The 2016 Presidential Campaign and the Battle For The Meaning of America. "To get out of a Democratic primary, you have to be explicitly credentialing your support for these identity-based issues."

Activists and experts insist that race is no longer the third rail of politics. In fact, they say, if a candidate cannot adeptly navigate racial conversations, they may struggle in a Democratic primary. That's particularly likely in 2020, when voters in California, Texas, and a host of diverse southern states head to the polls early in the season on March 3.

"There just can't be any blurriness ... You got to call a spade a spade in 2020," said DeJuana Thompson, the former African-American director at the DNC and the creator of Woke Vote, which successfully mobilized an unprecedented number of black voters during the special Senate election in Alabama in 2017 where Doug Jones became the first Democrat to win a Senate race in the state since 1992.

With multiple black, Latino and female politicians eyeing the presidency, part of the Democratic conversation around identity politics will also inevitably include questions of representation.

"I do not think that an all-white, all-male ticket will work in 2020," said Thompson. "I just don't believe it will motivate the turnout that it needs to." 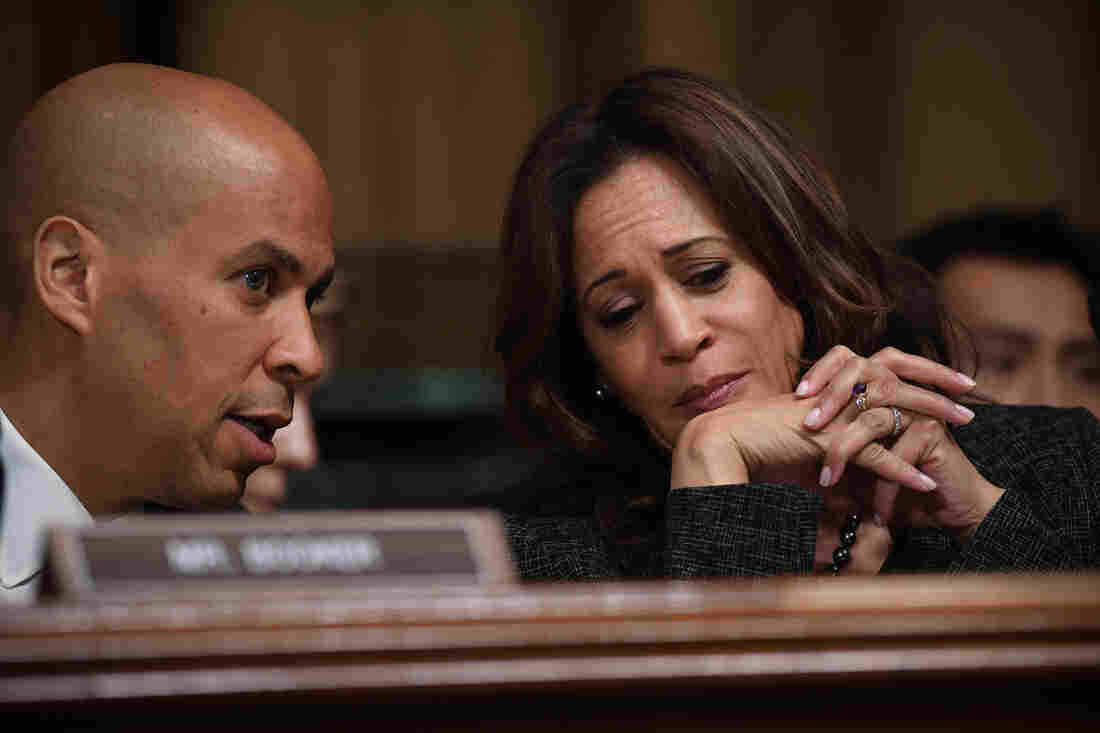 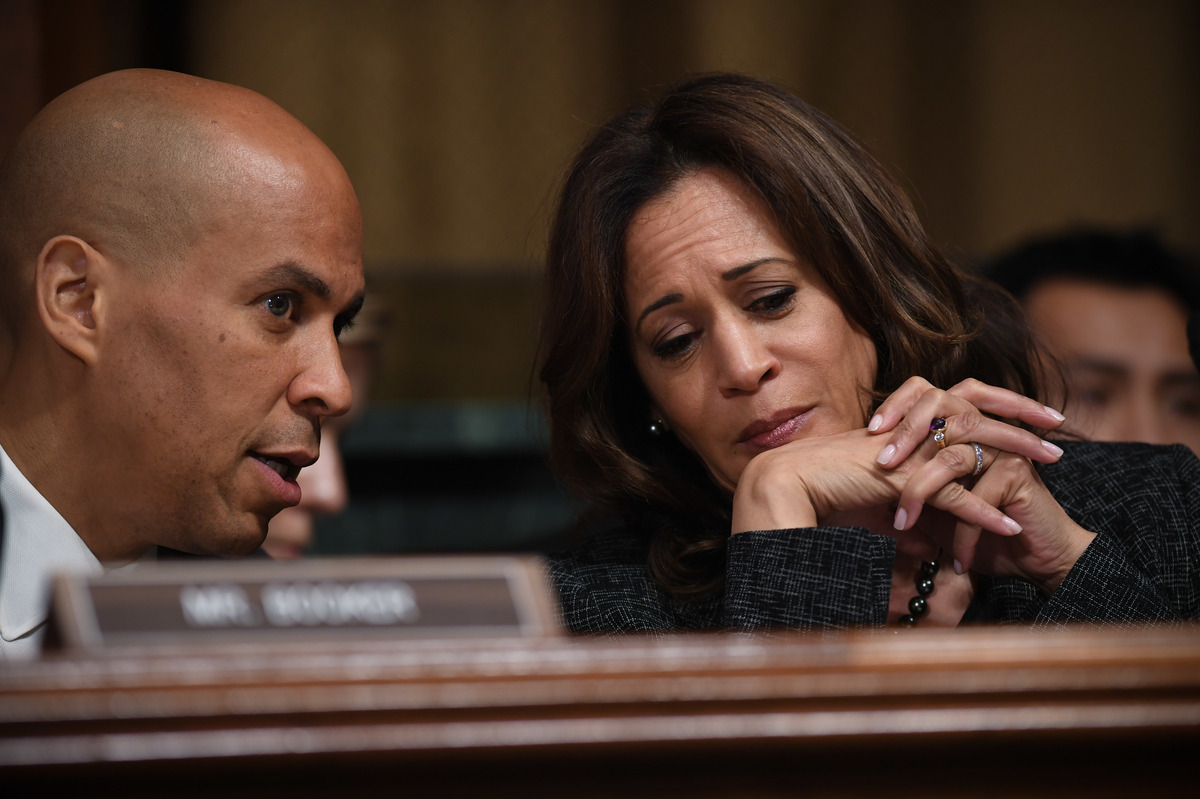 Sens. Cory Booker (L) and Kamala Harris (R) during a Senate Judiciary Committee hearing. Both senators are weighing whether to run for president.

A shift in style and substance

After the 2016 election, some Democrats blamed Hillary Clinton's loss on "identity politics." They said the Democratic nominee seemed to emphasize where someone went to the bathroom (a reference to transgender bathroom bills) more than whether or not someone had a job.

But that post-2016 identity crisis has largely died down. In a recent interview with The Washington Post, Harris said the phrase "identity politics," has been misused pejoratively to marginalize legitimate concerns in minority communities. Plus, she suggested, it would be impossible to ignore race in the current political climate, where President Trump's racially-charged comments are a constant feature.

"The energy on the Democratic side is anti-Trump," said Tesler "And if you are anti-Trump, you need to be talking a racially progressive message that combats his open hostility towards lots of different racial and ethnic minority groups."

And so although the economy and healthcare are important issues for Democrats, Tesler explains, they're not enough in 2020. He points to the struggles Vermont Sen. Bernie Sanders faced in 2016.

Candidates seem to understand that.

Earlier this month at Morgan State University, a historically black college in Maryland, Massachusetts Sen. Elizabeth Warren, told graduates the rules of the economic system are rigged. "Our government — not just individuals within the government, but the government itself — has systematically discriminated against black people in this country," she said. 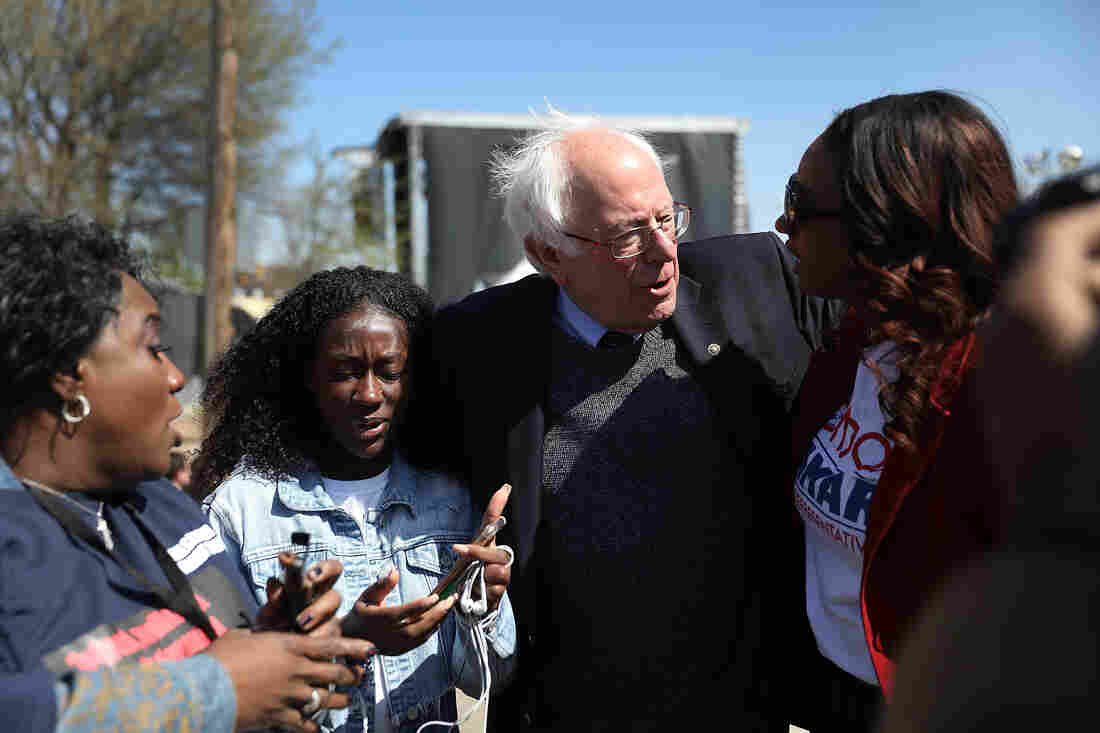 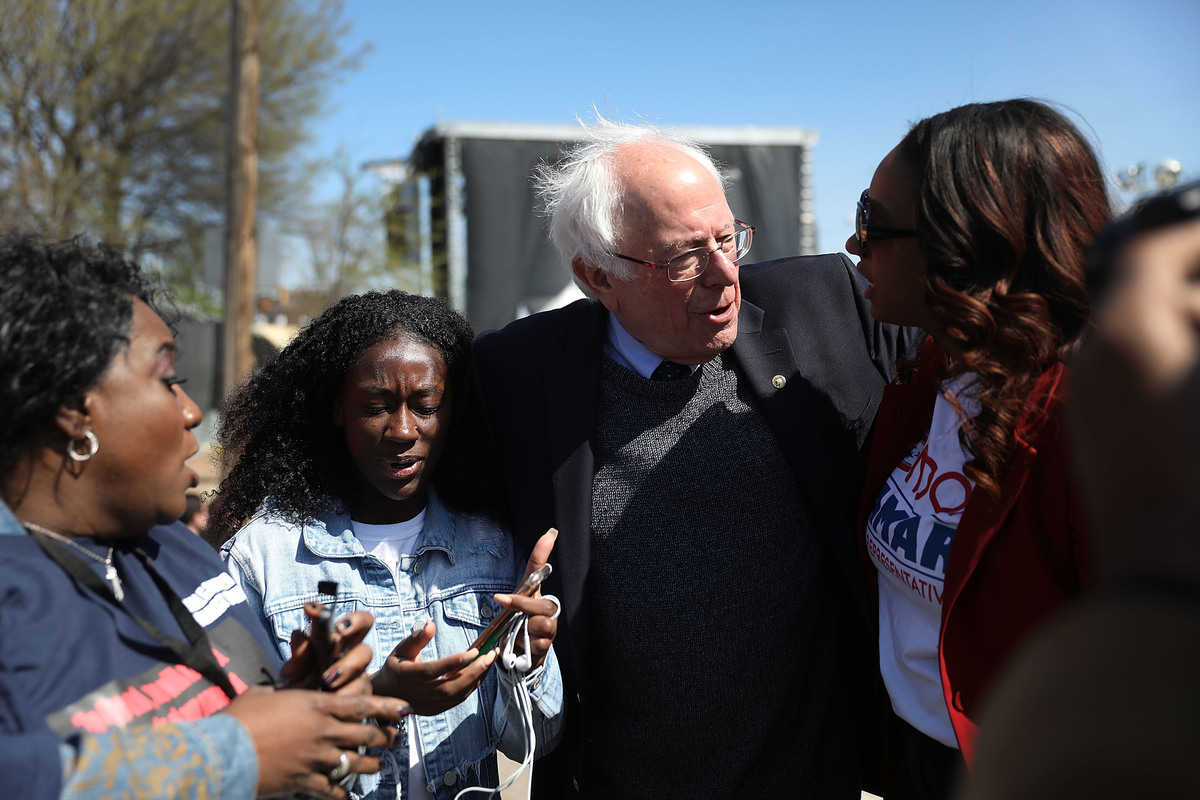 And if a candidate cannot figure out how to maneuver through issues of race and gender in a primary, some Democrats say it could prove to be a liability.

Already, a couple of candidates have made some missteps. After the midterms, Sanders told the Daily Beast that "there are a lot of white folks out there who are not necessarily racist who felt uncomfortable for the first time in their lives about whether or not they wanted to vote for an African-American."

Warren learned a similar lesson with her widely-publicized release of a DNA test, in an attempt to prove Native American ancestry.

The move backfired for the Massachusetts senator.

"Destroying the unity in the country?"

Emphasizing identity might be a successful, even necessary, strategy for Democrats in a primary, but it's unclear what it would mean in a general election.

"It is a good mechanism to win an election, but it's also effectively destroying the unity in the country," said GOP pollster Frank Luntz who has been moderating focus groups with first-time voters about identity. "The problem is that ... you in essence declare war on other groups to talk about how you've been victimized."

Not all Democrats are convinced that emphasizing race and identity issues is a smart strategy. Steve Bullock, the governor of Montana, a state Trump won by twenty percentage points, has spoken about the need for his fellow Democrats to run on economic issues that can bridge social and cultural divides.

Likewise, the outgoing governor of Colorado John Hickenlooper and another possible 2020 contender, has been hesitant to engage in much of his party's current debate around race and culture. He serves on the advisory board of a group of Democrats called New Democracy, whose goal is to "expand the party's appeal across Middle America."

"Republicans are the worse offenders, but both parties have indulged in a civically corrosive form of identity politics," the group's mission statement reads.

That message hearkens back to a younger Barack Obama, who seemed to dismiss the idea of identity politics, famously telling the Democratic National Convention in 2004, "There's not a black America and white America and Latino America and Asian America; there's the United States of America."

But, in the years since his election as president, Obama has sounded a different tone.

At an event at Rice University last month, he called race "one of the major fault lines in America."