Accessibility links
Review: 'Welcome to Marwen' Is Bloated And Lifeless Robert Zemeckis adapts a gripping documentary about one trauma survivor's low-fi art project; the result is a "bloated and lifeless" drama that trivializes his experience.

'Welcome To Marwen,' By Way Of Hollywood Cliches And False Uplift

'Welcome To Marwen,' By Way Of Hollywood Cliches And False Uplift 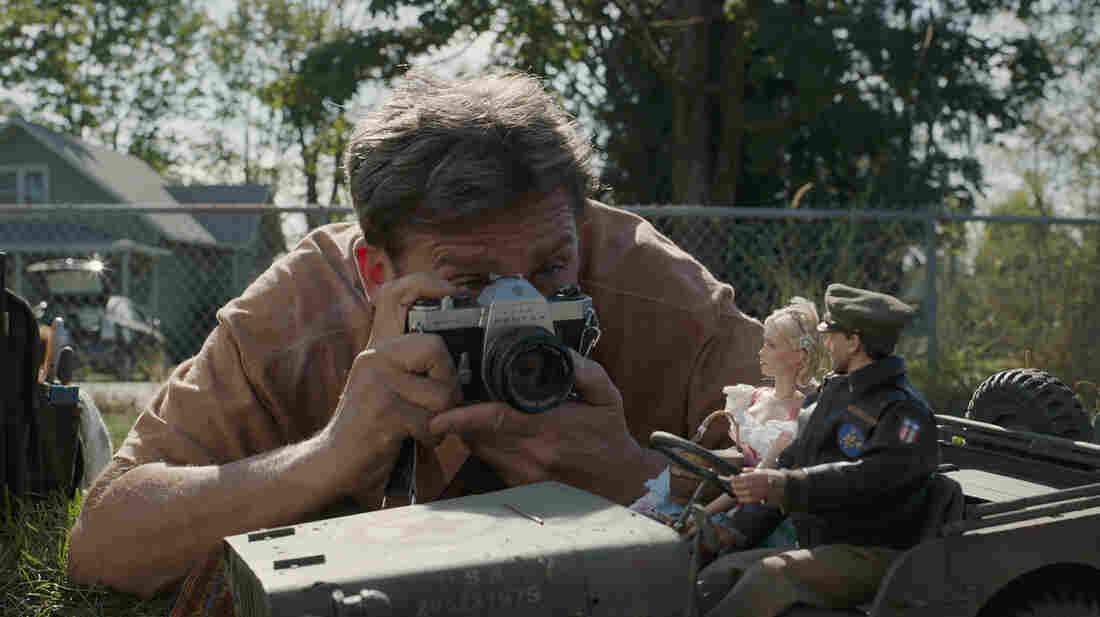 All dolled up: Mark (Steve Carell) photographs the plastic stand-ins of his backyard miniature town in Welcome to Marwen. Universal Pictures hide caption 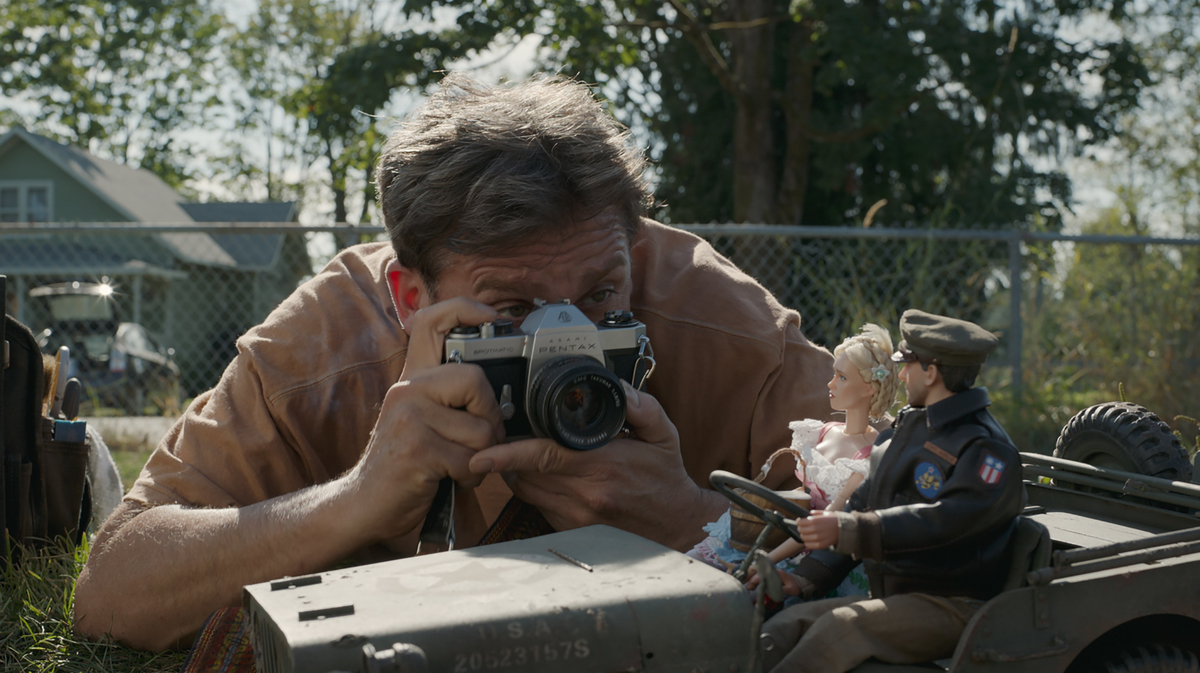 All dolled up: Mark (Steve Carell) photographs the plastic stand-ins of his backyard miniature town in Welcome to Marwen.

The 2010 documentary Marwencol introduced the world to Mark Hogancamp, an artist from upstate New York who uses dolls to stage eerie, violent dramas in a scale-model Belgian WWII town he's built in his backyard. Hogancamp does this as a form of therapy: A group of men beat him within an inch of his life after he revealed he enjoyed wearing women's shoes. The attack left him with brain damage so severe he lost all of his memories and much of his motor functions. In the land of Marwencol, Hogancamp gets to be a heroic GI, the many real-life women he admires become leggy, gun-toting vixens, and his attackers are ruthless Nazis, all locked in an eternal struggle for dominance over his brain.

Mark's dolls already looked a lot like they were starring in a Robert Zemeckis movie. They combine some of the longtime director's favorite things: kitschy Americana, magical realism, and the same dead-eyed plastic faces the filmmaker "perfected" (is that the right word?) with his enormously expensive motion-capture epics like The Polar Express and Beowulf. So it's little wonder Zemeckis found his way to the material. But after Welcome to Marwen makes its upteenth detour into forever-war wonderland and false uplift, you may wonder which part of Hogancamp's story he actually connected with.

As it turns out, throwing a lot of money at a lo-fi, highly personal art project renders it bloated and lifeless. Still, everyone here is trying their best. Steve Carell makes a good Hogancamp, absorbed in the detail of his work so he doesn't have to talk to anyone about the PTSD he still endures daily. He's expected at his attackers' sentencing hearing, as well as the first gallery opening of his work — two events he really doesn't want to attend in about equal measure — and when he distracts himself by misreading romance into the intentions of a pretty new neighbor (Leslie Mann, whose outfits and demeanor already put her halfway to doll-land), it's both noble and a little pathetic. The film clears the bare minimum (for Hollywood) threshold of still allowing its hero to be a cross-dresser and the attack to be correctly identified as a hate crime ... although Carell himself barely wears the woman's shoes his character professes to love, instead delegating them to his CGI alter-ego in Marwen.

Indeed, the Marwen stuff is what's being sold to us, and it's the most difficult part of the movie to get behind. Done in motion-capture, it's a bit like Toy Story by way of Robert Crumb, and can never decide just how adult it's willing to be. Carell's "Hogie" presides over a chaste harem of Barbie-breasted ladies in high-femme getups, including alter egos of Janelle Monáe's one-legged Iraq War veteran; Gwendoline Christie's Russian therapist; and a kind hobby-shop owner played by the charming Merritt Wever. When the "women of Marwen" march in formation, lighting Molotov cocktails behind their skimpy dresses, it's a moment that flirts with honestly depicting the fantasies of their creator.

But we back off from that pretty quickly, just like we back away from the often sadistic violence the real Hogancamp's dioramas unleash against the stand-ins for his attackers. Zemeckis and his co-writer Caroline Thompson must have realized that the closer they ventured to their hero's actual needs, the less appealing his story became to the audience they wanted.

And who is that audience, exactly? Zemeckis has said in interviews that he believes Welcome to Marwen can "tell the story actually beyond what the documentary was able to," implying that he thinks he is improving on it, or at least that he believes as a rule that "beyond" is the same thing as "more spectacle." This is now the second time, after the already-forgotten The Walk, that the director has spent a lot of money to adapt a nonfiction film about a real-life iconoclast. You can't blame fans of documentaries for being protective of the ones that get big: The genre is routinely under-appreciated, and the idea that a fictionalized, star-driven retelling should be a doc filmmaker's ultimate reward is a bit insulting. The extra attention that gets paid to the original film is nice, though.

Funny enough, for all its storybook beauty, Welcome to Marwen does the opposite of going "beyond" the story. The tone of the film winds up trivializing the art, since the dolls make jokes about the fact that they're dolls, and Zemeckis gets to sneak a Back to the Future reference in there. It also lets the role of Deja Thoris (Diane Kruger), a blue-haired Marwen witch with the power to resurrect the Nazis, serve as a convenient shorthand for Mark's lingering trauma. Vanquish her, the movie suggests, and he'll be cured.

Yet the thorough blah-ness of Marwen, a narrative that could have still been challenging and dark and humorous even in fictionalized form, isn't really the fault of any one thing. Like many true tales before it, the film simply falls victim to corporate Hollywood's insistence that there is only one way to tell a story about trauma. You will be inspired, the movie insists, like the shiny plastic Hogie barking orders at his flesh-and-blood counterpart. Just climb into this fantasy world, and you won't have to think about anything else.