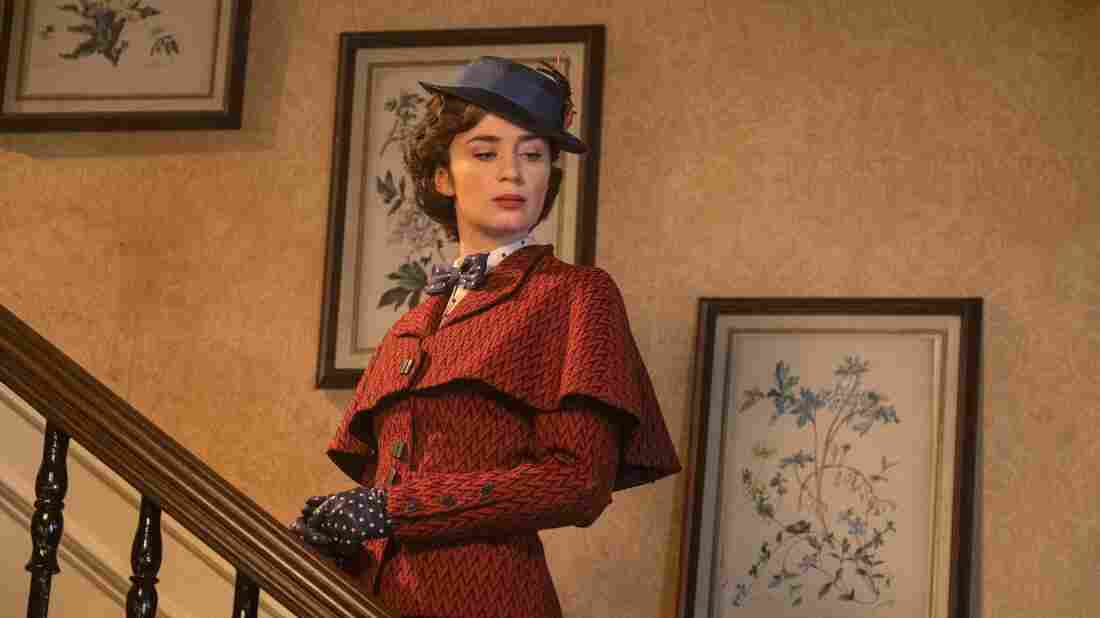 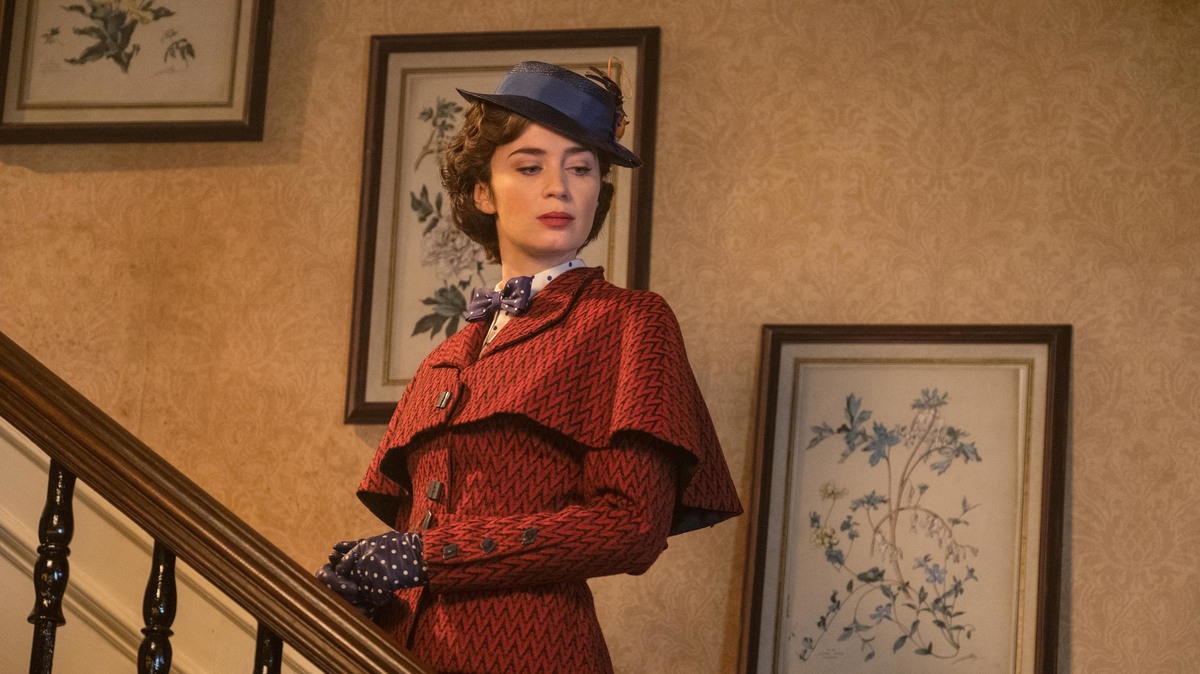 Perhaps the smartest decision in the sequel Mary Poppins Returns is that it's no more clear than it ever was how, exactly, this nanny floats in. We don't know where Mary came from, how exactly she has relatives given that she seems to have simply materialized from the sky, or whether she was ever a child herself. Mary Poppins simply is.

It's hard to bring to life a character with no past and no future except to visit more children, take them on more adventures, and then leave them again. Created in the P.L. Travers children's books and indelibly committed to film by Julie Andrews in 1964, Mary is special in part because since she's magic, she is nurture without need. She doesn't need to be thanked; she doesn't even need to be remembered. The helping is all.

In this sequel, Mary (Emily Blunt) has returned to the Banks home, where her former charges Michael (Ben Whishaw) and Jane (Emily Mortimer) are both living with Michael's children, following the death of his wife. Michael is still mired in grief, with his children unsure of how to go forward. Furthermore, the immediate concrete crisis, destined to collide symbolically with the deeper emotional crisis, is that the bank that was so much a part of Jane and Michael's father's life is now knocking at the door looking to have the mortgage paid. Without a solution, the family will be without a home. It is this troubled set of circumstances that brings Mary floating in on her umbrella to the delight of the children and Mary's friend Jack (Lin-Manuel Miranda), a scruffy local lamplighter.

Mary Poppins Returns: Is It A Jolly Holiday?

Directed by Rob Marshall, who directed Chicago in 2002 and Into The Woods in 2014, Mary Poppins Returns is structurally and stylistically modeled on the original. In fact, it is so modeled on the original that it is something of a hybrid between a sequel and a remake — a requel, perhaps. A seqmake. And as with the original, there's very little overarching plot, nor is much needed. Mary takes the children (Nathanael Saleh, Pixie Davies and Joel Dawson) on a series of adventures of imagination and absurdity. A world is inside a bathtub; a balloon lifts you into the sky. And a chipped bowl is the doorway into an animated sequence reminiscent of "Jolly Holiday."

Children's books often progress this way, with the barest frame holding the incidents together. On film, this can be helpful with kids who might want to rewatch a movie a hundred times, but maybe only their favorite parts. (Consider this the confession of someone who owned the Mary Poppins soundtrack LP as a child: I always skipped "Feed The Birds," because I thought it was so, so, so boring. Sentimentality did not work its magic on me as a 6- or 7-year-old.) It's true that the story here is threadbare in a way that may make it less satisfying for adults than, say, the more emotionally sophisticated Pixar and Disney stories. Mary does have an overarching purpose in her games, though, and it is to strengthen the family — to make herself obsolete, really. Here, that means helping the children through the loss of their mother and, even more, helping them connect with their grieving father.

As is true in most sketch comedy and most movie musicals, there are elements here that are eminently skippable. Regrettably, the appearance of Meryl Streep as Mary's cousin features one of the weakest songs on the soundtrack and never really justifies its own existence. One fewer diversion would have made for a more nimble film, and it would not have been missed. (At an overlong two hours and 10 minutes, it's still 10 minutes shorter than the original.)

The material is also not presented visually quite as well as it could have been. At one point, Miranda's Jack leads a giant group of bicycling lamplighters in a musical number, and dancing breaks out. Modern musical films often struggle in the presentation of dance, and this is no exception. The cuts are too fast, the shots are too tight, and while they might be covering for Miranda in elements of the number, they certainly don't need to cover for the rest of these guys. That you get no real opportunity to pull back and watch them all work seems like a straightforward directorial failure from Marshall, who has been directing musicals for more than 15 years and still strains to make dancing ... well, sing.

What does work well is the art direction and the use of color. Deep, vibrant blues and bright reds stand out against the gray tones of buildings and overcast skies, and Blunt's wardrobe is exactly the kind of swoonworthy period touch that makes being in London in the 1930s worth it.

Emily Blunt, so often the best thing in everything she touches, is a wonder in this role. She has a sly, confident charm, just right for a character who exists only to improve the lives of others and then move along. Blunt plays Mary with a rich and dry wit, an earthy alto rather than the trilling soprano she was in 1964. It's the right decision. If she tried to sound like Julie Andrews, the comparisons would only have been harder on her. If she tried to imitate Andrews' precise bearing, the same thing would have happened. This is a distinct take on a character who is so unusual and so unforgettable.

Perhaps part of the reason Mary Poppins is so intriguing is that she upends our expectations about stories of nurture. Typically, stories about love given to children take into account parental insecurities, so that the parents and the children both have their problems and their needs. That's what the story of the children and Michael is like. Michael has his own grief, and it complicates his parenting, so everyone has to understand each other's limitations. The parent must learn to be the parent, but the parent is on his own journey.

But Mary has no history and no attachments, and she will soon be gone and largely forgotten. The adult Michael and Jane, for instance, while they remember her from their childhoods, seem to have dismissed their time with her as a series of childish fantasies they once had about magic. The classic line that she is "practically perfect in every way" is not just about her perfect manner, kindness, magic and beauty (a friend recently pointed out how odd it is that the Banks children in the original film wanted no ugly nannies). Mary is perfect because she is not a person with needs of her own; she is perfect love and guidance. She represents both a parental fantasy of giving your kids exactly what they need while keeping them in line and never making a mistake, and a child's fantasy of a parent with nothing to think about in the world except for you.

Making that character make sense in a Disney film as anything other than either a soft marshmallow or a stern British disciplinarian isn't easy. Blunt allows Mary to be amused and delighted but never out of control. She is always a step ahead of the situation, but she allows herself the indulgence of a marvelous music-hall-style number with Jack, the infectious and marvelous "A Cover Is Not The Book." This is where you will hear Miranda sound most like himself, despite the fact that the music in the film is not his. It's from Marc Shaiman and Scott Wittman, who also collaborated on Hairspray, and it's catchy and memorable.

By the way, how do Mary and Jack know each other, exactly? Why is he familiar with her powers where no one else seems to be? Unclear. Again, they do not explain.

Miranda is an interesting case. He is a once-in-a-generation composer, but he is a simply very good performer. He works well as Jack, who drafts on Miranda's naturally generous and game persona, even though we never do learn much about him and what story he gets is more than a little underbaked.

The rest of the cast is strong and thrives in these roles: Whishaw makes Michael's grief so palpable in one early scene that he doesn't have to return to it very explicitly or very often in order for it to hang over the story. Mortimer's character is less carefully drawn, to be sure (Jane is a labor activist in the tradition of her suffragette mother, but we don't see much of her work), but there are some absolutely delectable supporting roles and cameos. Colin Firth plays an absolute heel, which he does not usually, and adding Angela Lansbury just feels like the cherry on top.

And, finally, the filmmakers have publicized that they deployed Dick Van Dyke, who played Bert in the first film, and I wouldn't dream of spoiling his performance specifically. But I will say that to me, it was absolutely perfect, another smile in a series of smiles.

Mary Poppins Returns is not an adults' movie masquerading as a children's movie. It doesn't have the kind of rich through-line that a movie like Inside Out does. It was made for the purposes of delight — and, in fact, repeated delight. It was made, I think, to be replayable, relistenable, relovable. And as I sat writing this review and listening to some of the music over and over, I realized it was already working.