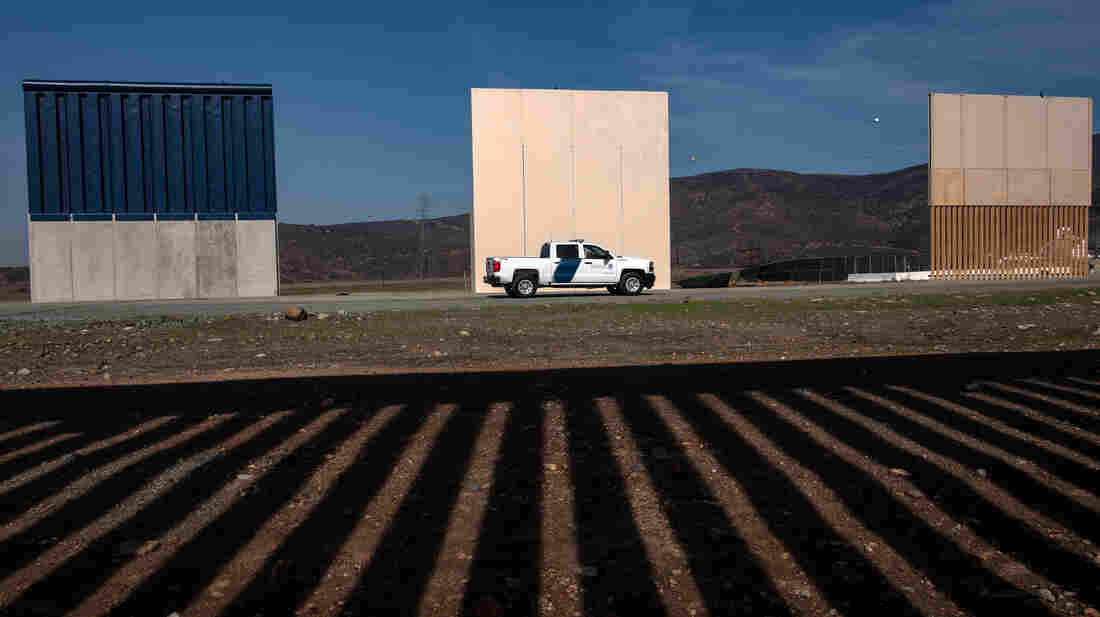 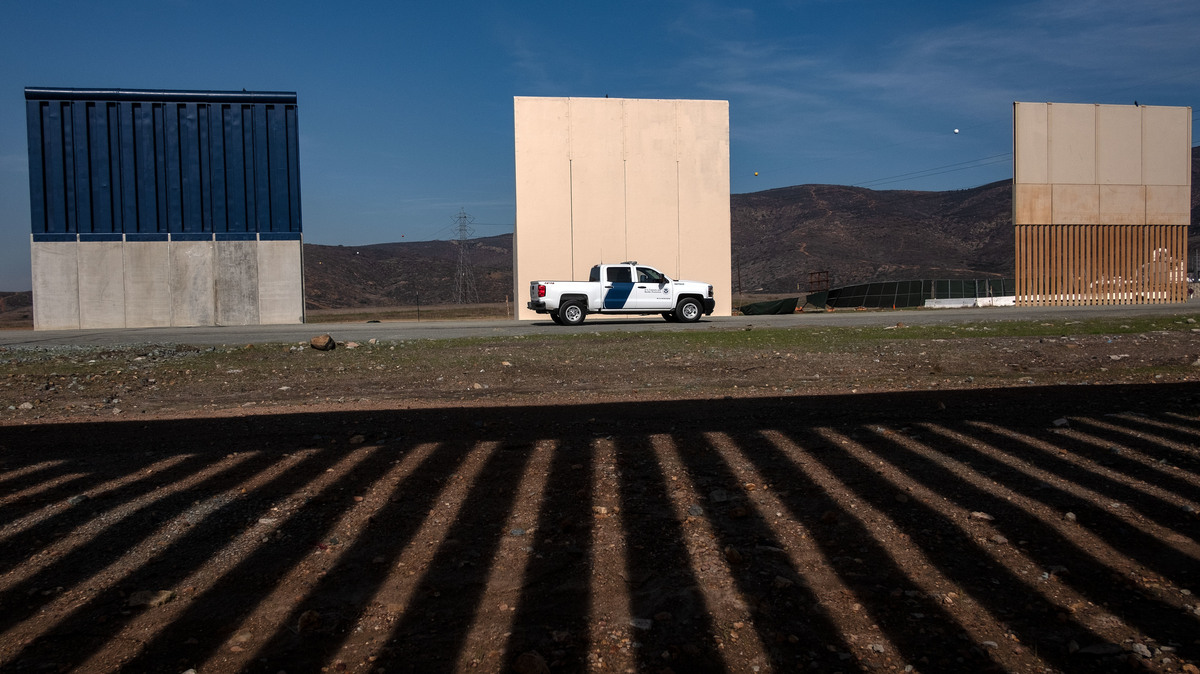 President Trump's wall prototypes are seen from behind the Mexico-US border fence in Tijuana, Mexico, on Dec. 12. With Congress unlikely to fund Trump's wall, Trump is floating other tactics.

President Trump launched his campaign in 2015 promising, "I will build a great, great wall on our southern border. And I will have Mexico pay for that wall. Mark my words."

Before long, supporters were chanting, "Build the wall!" and Trump was leading them in a call and response. Who will pay for the wall? Mexico.

Times have changed. Mexico still hasn't paid for it, and the GOP-controlled Congress is debating yet another short-term government funding bill that doesn't contain the $5 billion in wall money over which Trump threatened a government shutdown just a week ago.

His conservative media allies are rebelling, including Laura Ingraham of Fox News, who tweeted Wednesday, "It was supposed to be a 'big beautiful wall' with a 'big beautiful door.' Now it's just an open door with no frame. Unreal."

All of this has Trump offering new and increasingly far-fetched explanations for how the wall will be built and how Mexico will pay for it.

In a tweet on Wednesday, Trump offered a new pitch for how the border wall will get done: "Mexico is paying (indirectly) for the Wall through the new USMCA, the replacement for NAFTA! Far more money coming to the U.S.," he wrote. "The United States Military will build the Wall!"

Mexico is paying (indirectly) for the Wall through the new USMCA, the replacement for NAFTA! Far more money coming to the U.S. Because of the tremendous dangers at the Border, including large scale criminal and drug inflow, the United States Military will build the Wall!

Trump talks about the U.S. Mexico Canada Agreement, or USMCA, like the new trade agreement is already in place. It isn't.

It still has to be ratified by Congress and the legislatures in Mexico and Canada. So, the president's claim that far more money is coming into the U.S. couldn't possibly be true at this point. But will it be true in the future?

"There is no guarantee that on a net basis this trade agreement will produce more economic benefits for the U.S. than NAFTA did in the past," said David Gantz, a law professor at the University of Arizona who focuses on trade agreements. "We don't know yet, and we won't know for several years."

Gantz said when NAFTA was approved, backers oversold the economic benefits to the U.S. And while he argues there are some good improvements and updates in the USMCA, they aren't expected to supercharge economic growth in the U.S.

Asked about possible economic growth as a result of the USMCA bringing in more tax revenue, Monica de Bolle, a senior fellow at the Peterson Institute for International Economics, said, "We have no guarantee that that would happen including because the USMCA is first of all not all that different from NAFTA."

Trump Administration Will Send Asylum-Seekers To Mexico While Claims Are Processed Dec. 20, 2018

At the White House press briefing earlier this week, press secretary Sarah Huckabee Sanders was asked to explain how the USMCA would pay, even indirectly, for the wall. Here's the exchange:

Sanders: "We're talking about additional revenue that wouldn't have existed without the president getting a new deal."

Reporter: "Have you done the math on that? That —"

Sanders: "There are — there have been a number of things that we've looked at in which we know will have additional revenue that comes in through the USMCA."

Reporter: "Twenty-five billion from the USMCA into the Treasury?"

Sanders: "We think we'll have — we think there will be more than that that comes in."

It's not clear where her math is coming from, though. The White House Council of Economic Advisers hasn't studied the expected economic impacts of the new trade deal yet, and neither has the office of the U.S. Trade Representative, which led negotiations.

If Trump and Sanders are referring to revenue from tariffs, economist de Bolle points out that wouldn't be coming from Mexico, either.

Claim 2: The military will build the wall

Trump also claims that "because of the tremendous dangers at the Border, including large scale criminal and drug inflow, the United States Military will build the Wall!"

In Fight With 'Chuck And Nancy,' Trump Says He'd Be 'Proud' To Shut Down Government

"To date, there is no plan to build sections of the wall. However, Congress has provided options under Title 10 U.S. Code that could permit the Department of Defense to fund border barrier projects, such as in support of counter drug operations or national emergencies."

As for the funding, that is a much stickier challenge.

"This is not going to happen," said Todd Harrison, a senior fellow at the Center for Strategic and International Studies, who specialized in military budgeting.

Here's why he is making such a bold prediction: "For the military to build the wall, that would qualify as a military construction project, and there's not any money currently appropriated for this — certainly not $5 billion," he said.

FACT CHECK: Trump Says 'A Lot Of Wall Has Been Built' As He Demands We Build More

So, let's say the president decided the military should take money already set aside for something else and use it to build the wall instead — that would require approval from Congress. Harrison says all the relevant committees in both chambers would have to approve shifting, or "reprogramming," the funds. There are also caps on just how much money can be moved that way.

"If any one of those committees says no, you can't do it," Harrison said.

He has a hard time imagining those committees signing off.

"It would be coming at the expense of other priorities in the military," Harrison said. "Even if they agree with the wall, they would say, 'Hey, don't take our money to pay for it. This money is intended for the military. That's what it was approved for, and that's what we want it to be used for.' "

The process would be the same if the Trump administration wanted to shift funds to the wall from other agencies as well. Congress controls the purse strings.

And that only becomes a harder sell once Democrats take control of the House and the relevant committees in January.