Accessibility links
How Is The World Reacting To Trump's Decision To Withdraw From Syria? President Trump declared victory over ISIS. But the international response is decidedly mixed — from worries in liberated Raqqa to applause from Russia and measured resolve in Israel. 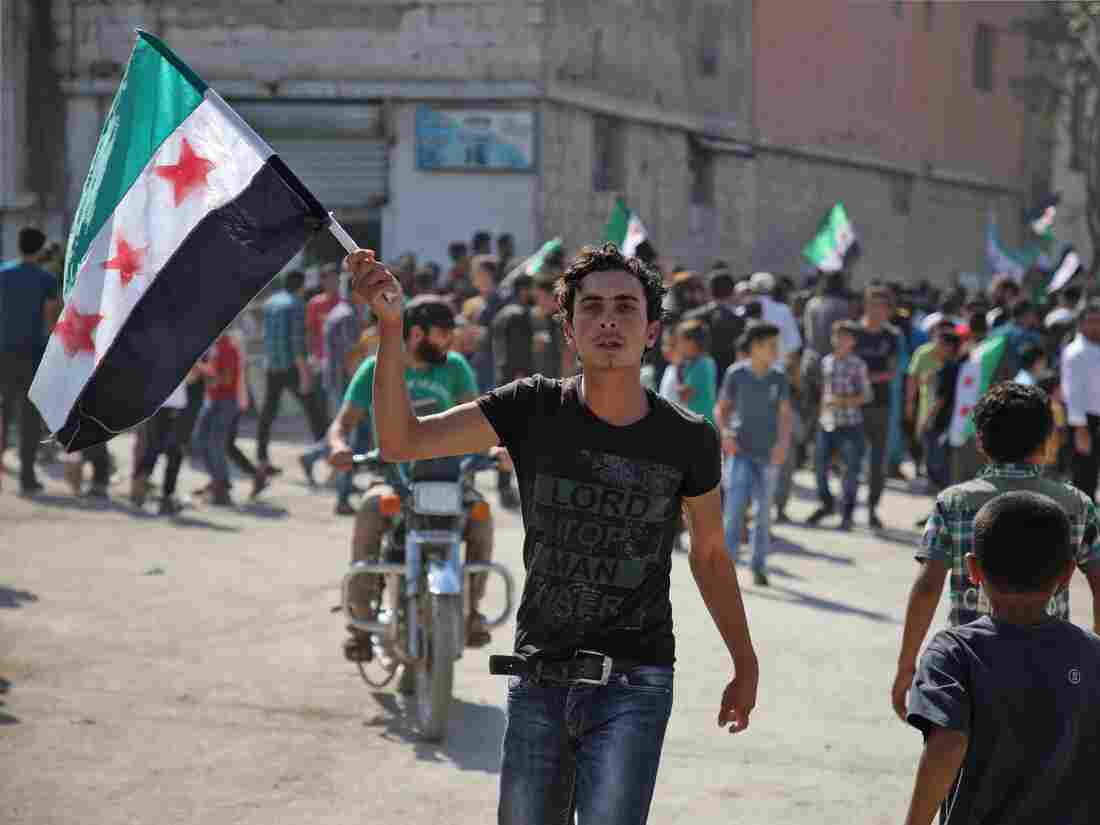 A young Syrian man waves an opposition flag during a demonstration against the Syrian government earlier this year in the rebel-held town of Hazzanu, northwest of Idlib. Aaref Watad/AFP/Getty Images hide caption 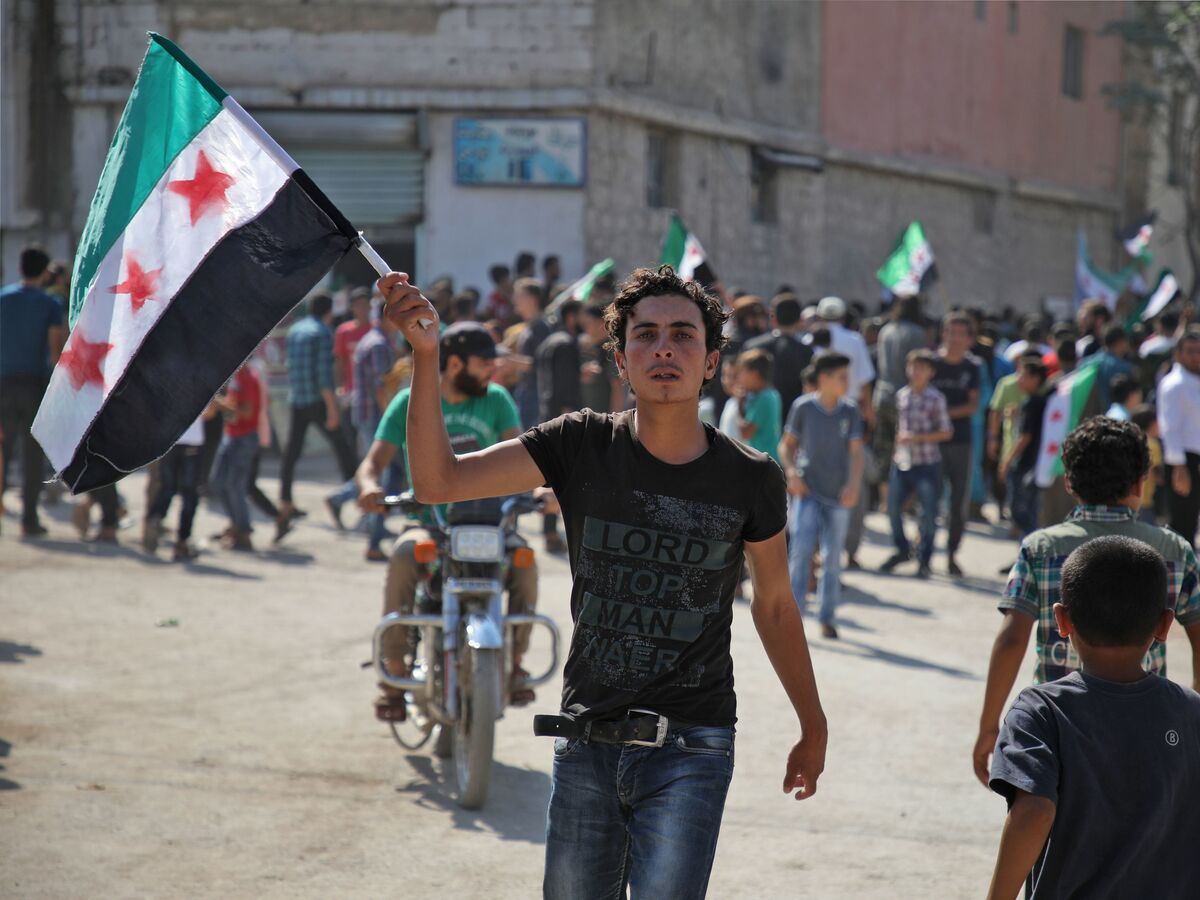 A young Syrian man waves an opposition flag during a demonstration against the Syrian government earlier this year in the rebel-held town of Hazzanu, northwest of Idlib.

President Trump's plan to withdraw all U.S. military forces from Syria has triggered disparate responses — from worries in liberated Raqqa and Kurdish-controlled areas to approval from Syrian and Russian officials.

Trump declared victory over ISIS, saying in a video Wednesday night, "We've beaten them and we've beaten them badly. We've taken back the land and now it's time for our troops to come back home."

Trump is also at odds with Gen. Joe Dunford, chairman of the Joint Chiefs of Staff. Early this month, Dunford refused to give a possible date for withdrawal from Syria, saying the job isn't over until areas are stabilized and local forces are trained and equipped to ensure security.

Then, days after Dunford made those comments, Trump announced Dunford's plans to retire, saying he would nominate Gen. Mark Milley to replace him.

The U.S. currently has more than 2,000 troops in Syria, fighting alongside Arab and Kurdish forces.

In addition to the troops, the White House is also ordering the withdrawal of advisers who have been trying to help reconstruct Syria's infrastructure, which has been mangled by civil war. The State Department will also withdraw staff who have been working on essential issues, such as providing water and electricity, and trying to get children into schools.

For Secretary of State Mike Pompeo, the decision represents a shift in priorities.

"The president made an enormous commitment to take down the caliphate, and that has been achieved," he told NPR's Morning Edition. "We now have the .... counterterrorism battle — not only against ISIS but against al-Qaida and others."

That assessment view has not been accepted universally, however. Several of the countries involved in the Syrian conflict have voiced their opinions on the decision. Here's a roundup of some key players: Two men walk past debris and damaged buildings in Raqqa earlier this year, not long after the city long controlled by ISIS finally fell to the Syrian Democratic Forces.

In Raqqa, fears of a power vacuum

"The Syrian Democratic Forces — that's the U.S.'s local Kurdish led partner there — are saying it's just not true that ISIS has been defeated. And they're saying that this withdrawal will damage the remaining fight against ISIS," NPR's Ruth Sherlock reports from Beirut.

"There's also a lot of panic among civilians. We reached people in Raqqa, that's one of the main cities that were largely destroyed in this war against ISIS. And they say they just don't know who will control this area now."

Both the Syrian regime and Turkey want to take the area away from Kurdish control, Sherlock said. And there is also the chance that there will simply be a vacuum of power, she added.

"One person we spoke to said they're afraid that ISIS will exploit this chaos and return to this area — just like extremists did when the U.S. pulled out of Iraq after the war there."

In the city of Kobani near the Turkish-Syrian border, Kurds have been digging tunnels out of concern that Turkey might stage an attack.

"Now with the U.S. leaving, there's a sense that they don't have any cover to protect them anymore, and that it's more likely that the Turks will move in," Sherlock says. "They are saying that they feel a deep sense of abandonment from the U.S." 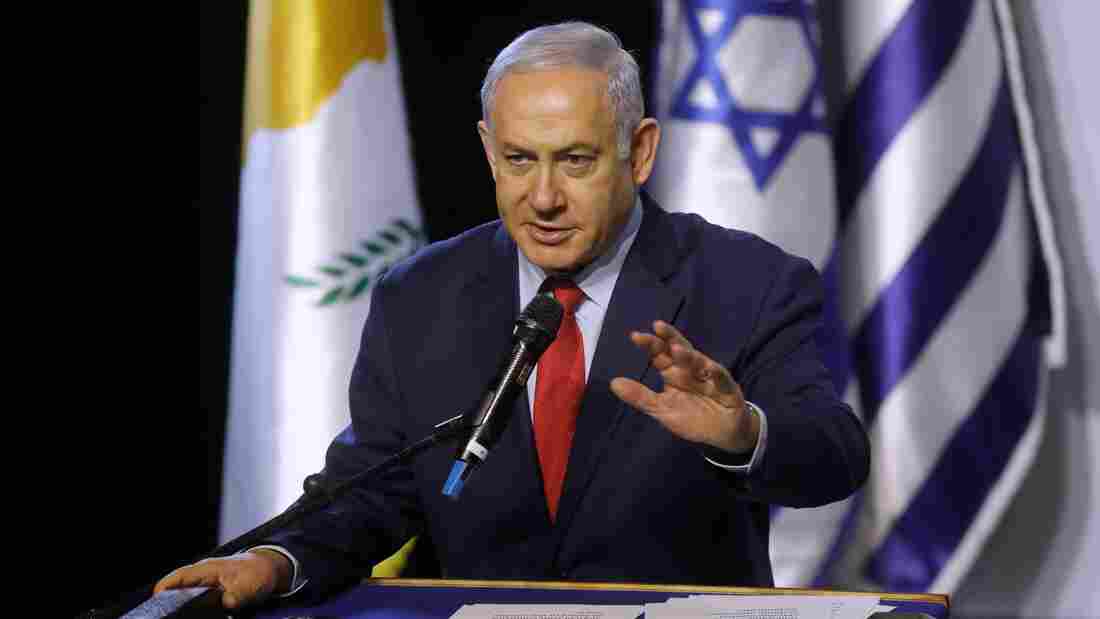 Israeli Prime Minister Benjamin Netanyahu delivers a speech Thursday in Beersheva. The hawkish leader struck a careful tone after the U.S. decision, making sure not to question the call made by his close ally, President Trump. Menahem Kahana/AFP/Getty Images hide caption 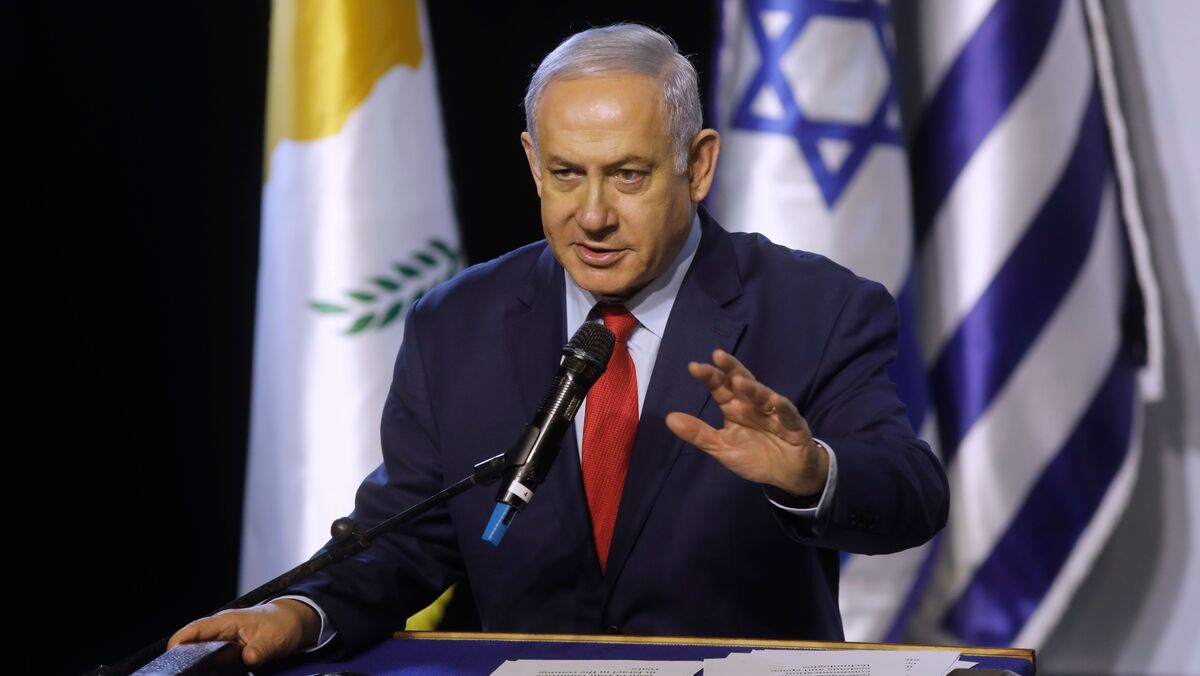 Israeli Prime Minister Benjamin Netanyahu delivers a speech Thursday in Beersheva. The hawkish leader struck a careful tone after the U.S. decision, making sure not to question the call made by his close ally, President Trump.

Israel projects a mixture of caution and resolve

An ally of President Trump and an outspoken hawk, Israeli Prime Minister Benjamin Netanyahu navigated a fine line in his comments immediately after Trump's announcement.

"This is, of course, an American decision," Netanyahu said in a statement released Wednesday, noting that Trump and Pompeo had alerted him to the move before they made it public.

"We will learn its schedule, its mode of operation and of course the implications for us," he added. "In any event, we will make sure to maintain Israel's security and protect ourselves from this arena."

At the same time, in recorded remarks, Netanyahu made clear the U.S. decision will not affect Israel's own military activities in Syria.

As we speak, we’re employing means to neutralize these tunnels, and we’ll continue to act in Syria to prevent Iran’s effort to militarily entrench itself against us. We are not going to reduce our efforts; we’re going to increase our efforts. pic.twitter.com/oVsdGQrJ3l

"Israel continues its operation against the Hamas terror tunnels, and will do so until its completion," he said, referring to the country's attempts to block tunnels that Palestinian militants have built to infiltrate Israeli territory. "As we speak, we're employing special means to neutralize these tunnels."

Coupled with those efforts along its border with the Gaza Strip, Israel recently launched a similar operation on its border with Lebanon, intended to "expose and destroy" tunnels built by the Iran-backed militant group Hezbollah.

Israel has attacked Iranian forces directly in Syria, carrying out airstrikes on what it calls dozens of Iranian military targets in the country. About four months ago, Israeli intelligence forces also reportedly assassinated a Syrian rocket scientist who they believed had been collaborating with Iran.

"We will continue to take very strong action against Iran's efforts to entrench in Syria," Netanyahu added. "In neither of these fronts do we intend to lessen our efforts; we will intensify them, and I know that we do so with the full support and backing of the United States." 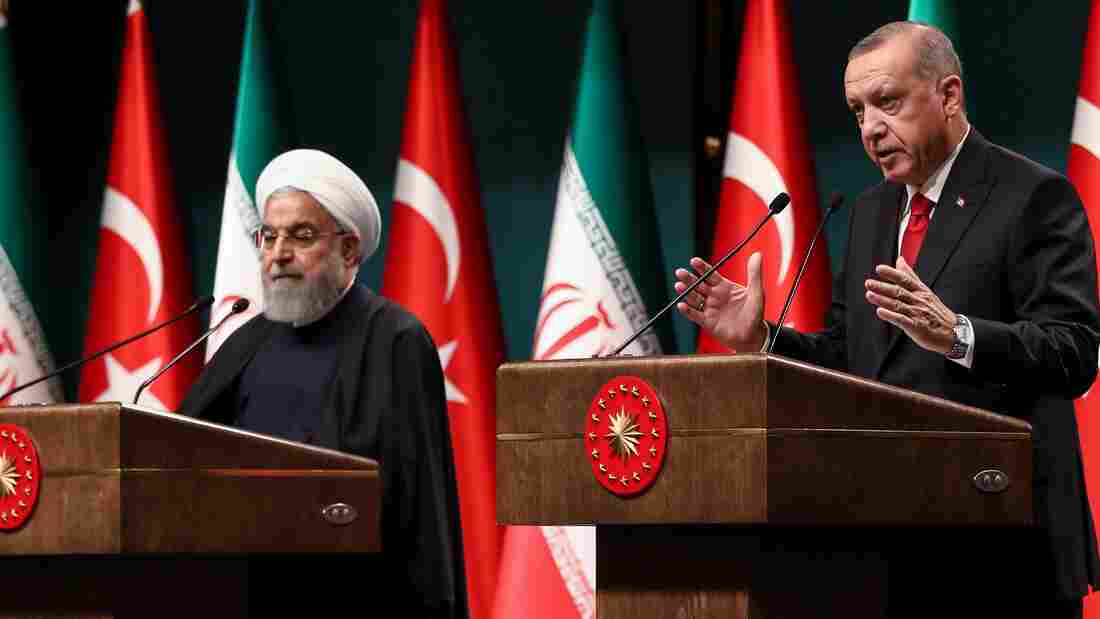 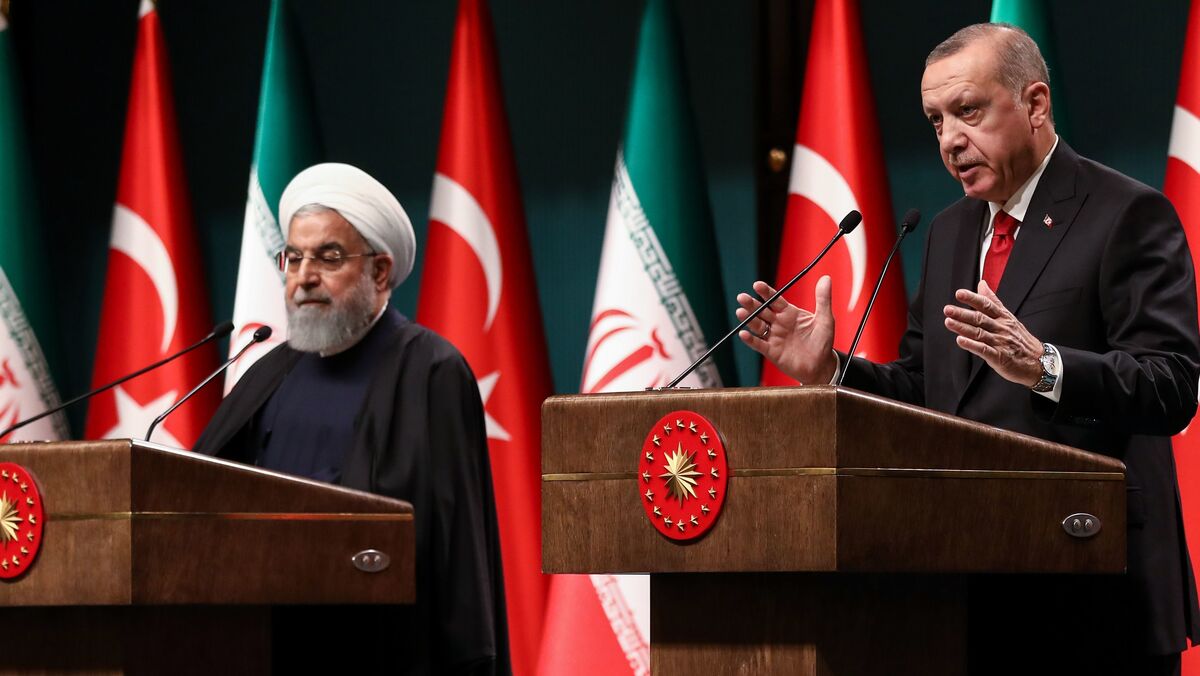 Turkey steps up the pressure — but toward what end?

The Turkish military has long had an intense interest in its neighbor to the east — an interest that flared into violence earlier this year, when Turkey launched an operation to clear Kurdish fighters from the borderlands between the two countries.

Turkish President Recep Tayyip Erdogan views the YPG, a Syrian Kurdish militia, as a terrorist organization allied with the separatist Kurdish groups operating within his own borders. But that view was not shared by the U.S., which irked its NATO ally with its decision to arm and support the YPG in the fight against ISIS.

Now that Turkey is eyeing a future in Syria without U.S. intervention, its leaders have sent some mixed signals on what it plans to do next.

On one hand, during a joint news conference Thursday with Iranian President Hassan Rouhani, Erdogan announced an intention to "increase our efforts to ensure permanent peace that will embrace Syria and whole Syrian people" — and he vowed to cooperate closely with Iran toward that end, Turkey's state-run Anadolu news agency reports.

On the other hand, Erdogan's top ministers appear to be gearing up for battle.

Kurdish terrorists are "digging some trenches and tunnels in Manbij and east of the Euphrates," Defense Minister Hulusi Akar told troops Thursday, saying the Turkish military is preparing "intensely" for a new offensive, according to Anadolu.

"Whatever they dig, trenches or tunnels," he added, "when the time comes they will be buried in the trenches that they dig. Of this there should be no doubt."

Russian President Vladimir Putin welcomed news of the U.S. withdrawal, saying during a news conference Thursday, "Donald is right, I agree with him," according to NPR's Lucian Kim.

"Donald is right, I agree with him." Putin says ISIS has been dealt a serious blow in Syria. "If US has decided to withdraw its contingent, it's the right thing to do." pic.twitter.com/fvuASAqxIk

But while the Russian president agreed with Trump's talk of leaving, he also suggested he would wait and see what the U.S. does.

Kim paraphrased Putin's observation that "We haven't seen any signs of U.S. withdrawal from Syria yet. [The ] U.S. has been in Afghanistan 17 years and almost every year they say they're leaving."

Putin also reiterated that in his view, the U.S. troop presence in Syria "is illegitimate as it was not approved by a U.N. Security Council resolution." By contrast, he noted, "Russian troops were invited by the Syrian government."

France: ISIS "has not been wiped from the map"

In announcing his decision to withdraw troops from Syria, Trump declared that "we have defeated ISIS in Syria" — but that view is far from shared by a close U.S. ally.

"Daesh is weaker than ever," Florence Parly, France's armed forces minister, said Thursday on Trump's medium of choice, referring to ISIS by its Arabic acronym.

"But," she added, "Daesh has not been removed from the map, nor have its roots. The last pockets of this terrorist organization must be defeated militarily once and for all."

"In the coming weeks, France will endeavor to ensure the security of all U.S. partners, including the Syrian Democratic Forces," a ministry spokesperson said in a media briefing Thursday. "The United States must take the protection of the populations of northeastern Syria and the stability of this area into consideration in order to avoid any further humanitarian tragedies and any return by the terrorists."